“Art In the Streets” has begun exactly where it started – outside on walls. The number of people in Los Angeles this week to mark Sunday’s opening of the show at the Museum of Contemporary Art grows by the hour and there are more walls in progress than a housing boom. Just in the last couple of days we’ve seen commissioned and non-commissioned new murals, pieces, tags, and installations freshly dripping by people like How & Nosm, Lee Quinones, Shepard Fairey, Blade, Cern1, JR, Augustine Kofie, Invader, Os Gemeos, Nomade, Saner, and many others. 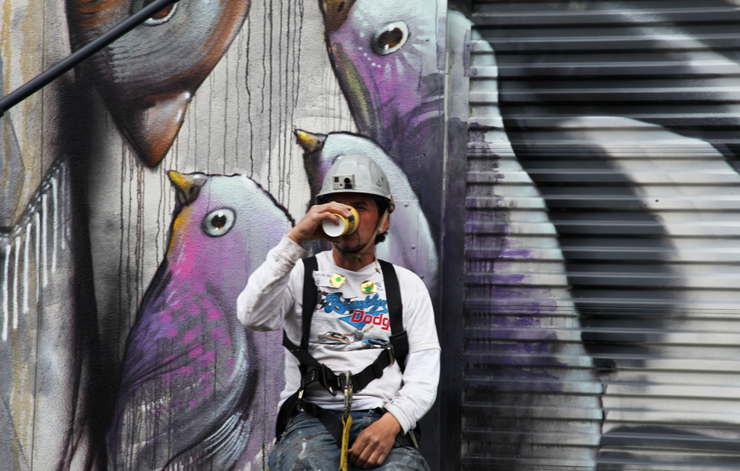 Lee Quinones takes a break on “Birds of a Feather”, the wall collaboration he’s directing that features  Futura, Risk, Able, Seno, Push, Loomit and Cern1. The new installation is on the wall that was previously installed by Italian artist Blu but was buffed soon after by the museum a few months ago – a subject still on the minds and lips of people here. (photo © Jaime Rojo)

Futura says it’s like Summer camp and others have likened it to a family reunion, which makes us think of lawn chairs, cheap beer, barbecue, and crazy old uncle Jed sitting on a picnic table rubbing egg salad into his hair and talking about the Republicans. But yeah, right now in this little part of LA there is a feeling of a camp that is headed maniacally toward total circus. 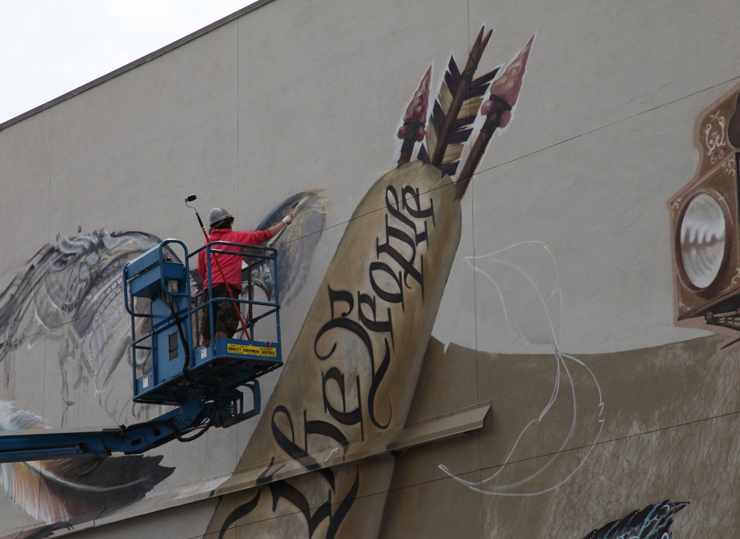 The show itself, which we’ve seen in it’s entirety, is an audacious and colorful endeavor to bring about 50 years of Graffiti and Street Art history and a number of it’s influencers and influences under one roof. Engaging and educational, visitors will have the opportunity to learn how certain tributaries lead to this river. No show on this worldwide phenomenon could ever hope to include everyone, and Curator Jeffrey Deitch, along with associate curators Roger Gastman and Aaron Rose have chosen touchstones and flashpoints that push their individual visions of how the story unfolded. While it doesn’t break much brand new ground, only the Bittersons (or Jealousinskis) will find sufficient cause to try to mug this solid, entertaining and participatory show full of surprises. But for a scene that never sought permission in the first place, it won’t matter.

Here are a collection of images on the museum grounds itself. Previews from the show tomorrow. 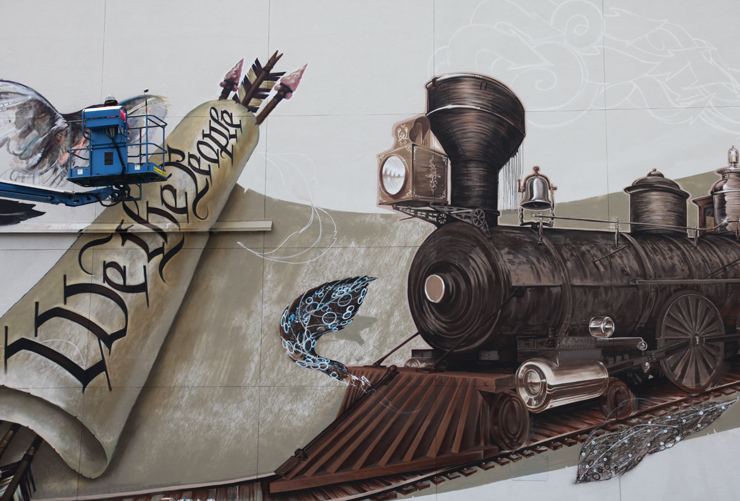 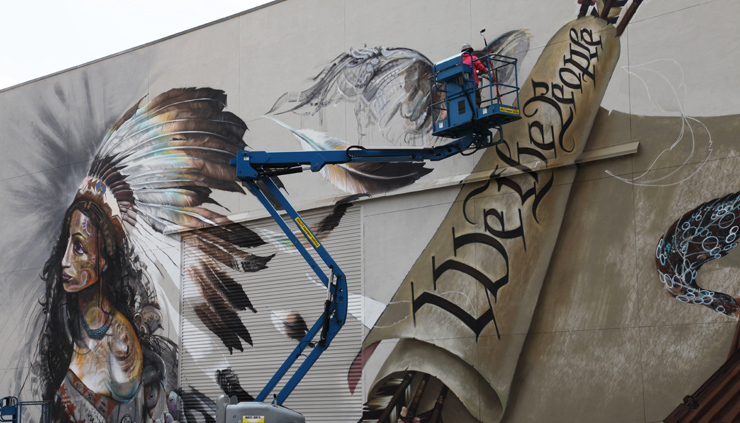 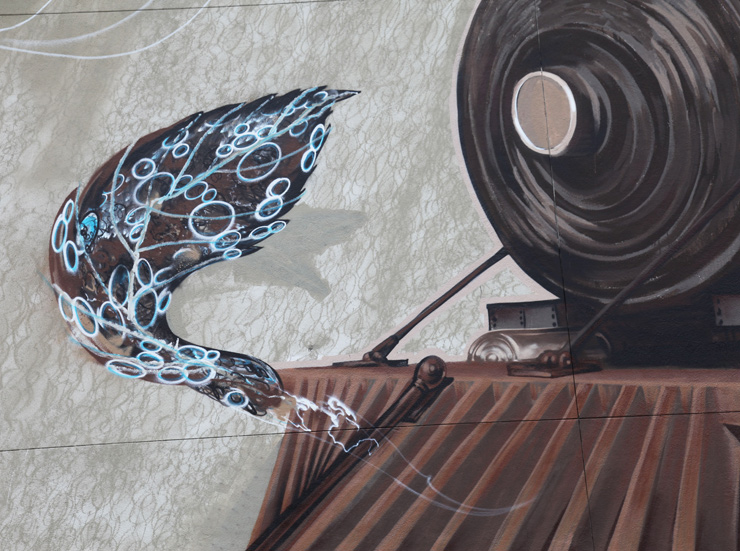 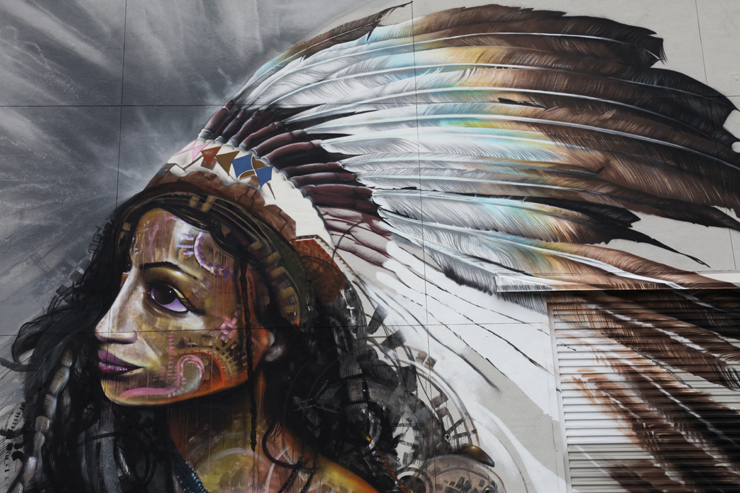 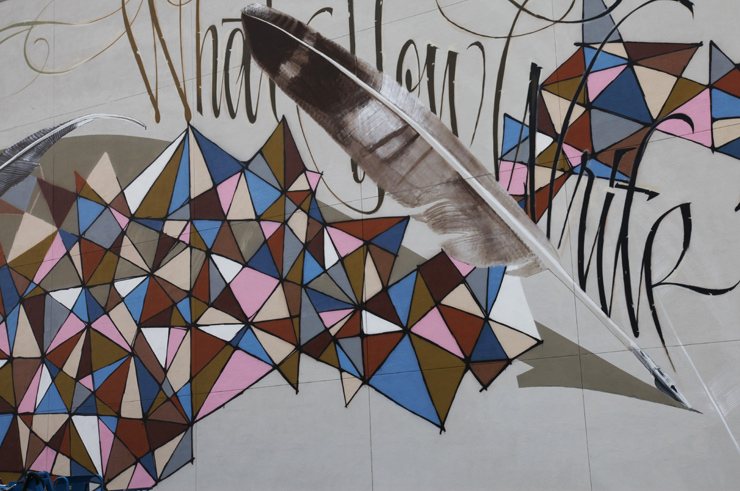 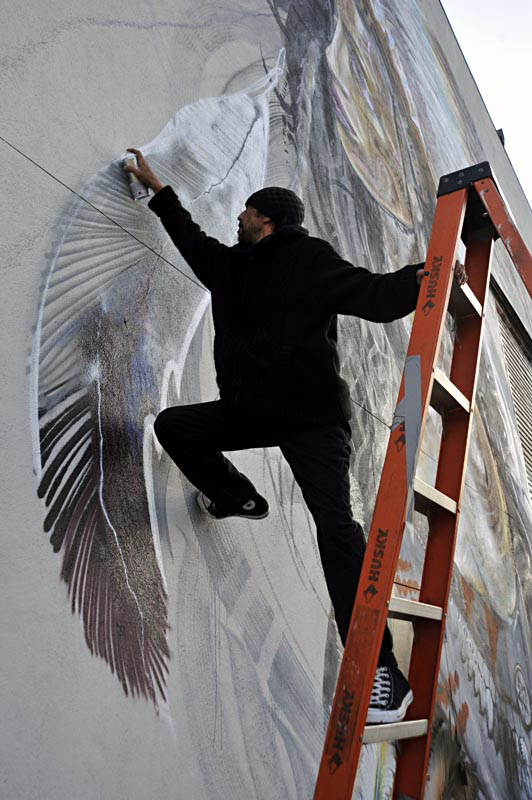 In this photo by Martha Cooper, Futura lends a hand to Cern1 to complete the collaborative mural on the side of Geffen Contemporary in time for the opening.  (photo © Martha Cooper) 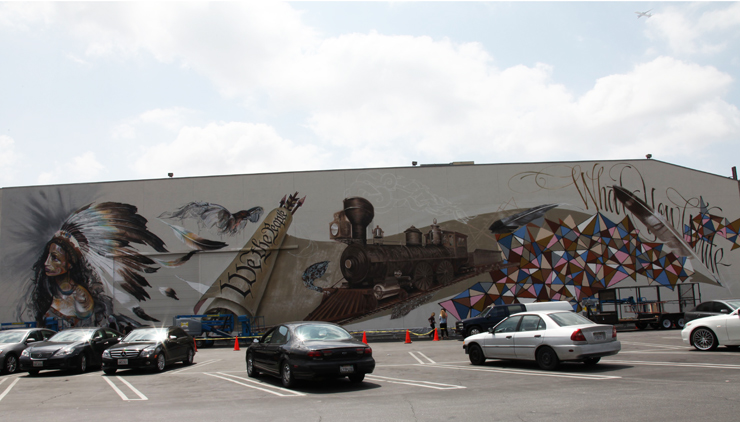 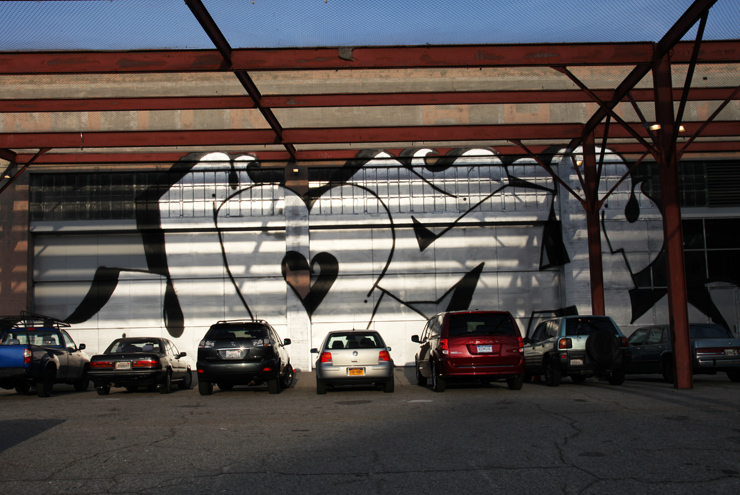 Barry McGee (Twist) finished this wall before heading indoors to reprise an installation he did in 2000 with ESPO and REAS called Street Market.  Roger Gastman says of the new installation that was still being finished as of yesterday afternoon, “This is another version ten years later, basically on crack. They brought in a number of other great artists to help work with them on it. Now it includes Alexis Ross, Dan Murphy, Jeff Flynn and a few others.” (photos tomorrow) 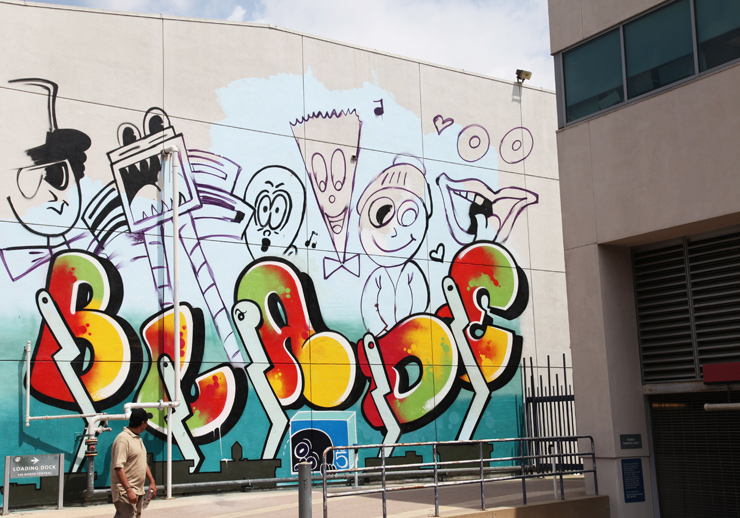 This Blade wall in progress is a direct reference to the famous Martha Cooper photo of one of his burners on an MTA train in the 70s.  It was begun after the museum washed off a fresh new Katsu fire extinguisher tag that appeared suddenly a few days earlier. (photo © Jaime Rojo) 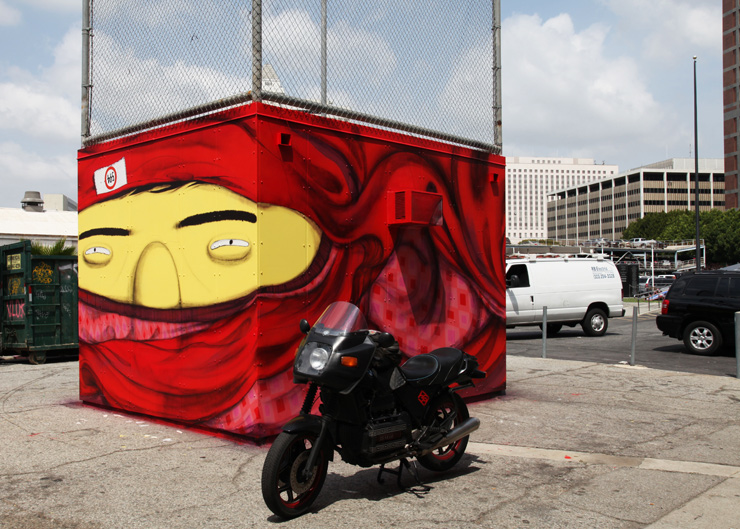 Os Gemeos cube in progress will contain something quite special that is being prepared in a garage nearby.  It actually looks like it could hold a dozen go-go dancers if that other thing isn’t finished in time for the opening. (photo © Jaime Rojo) 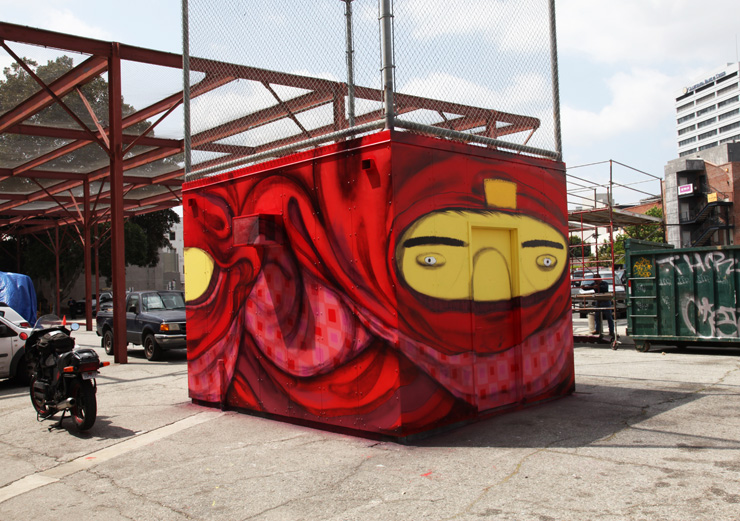 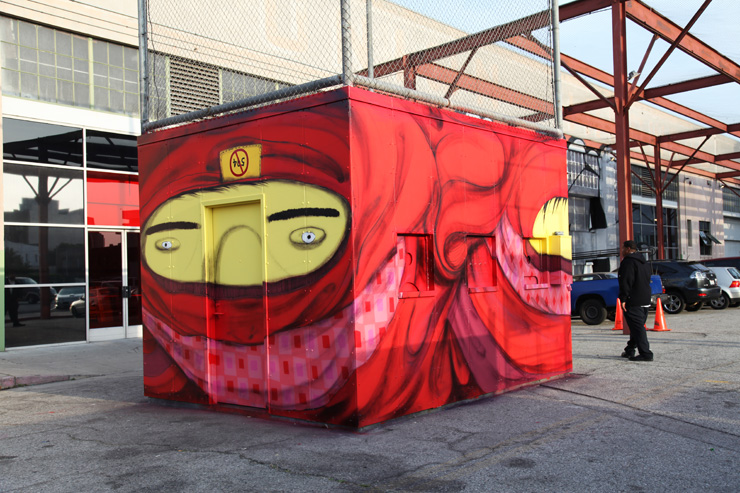 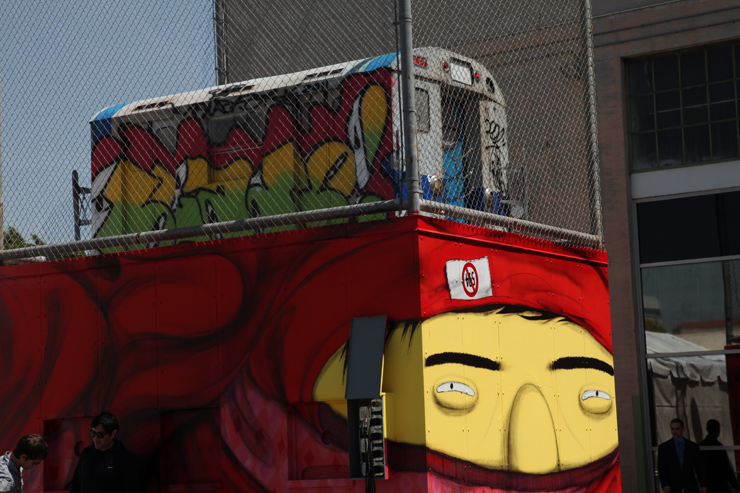 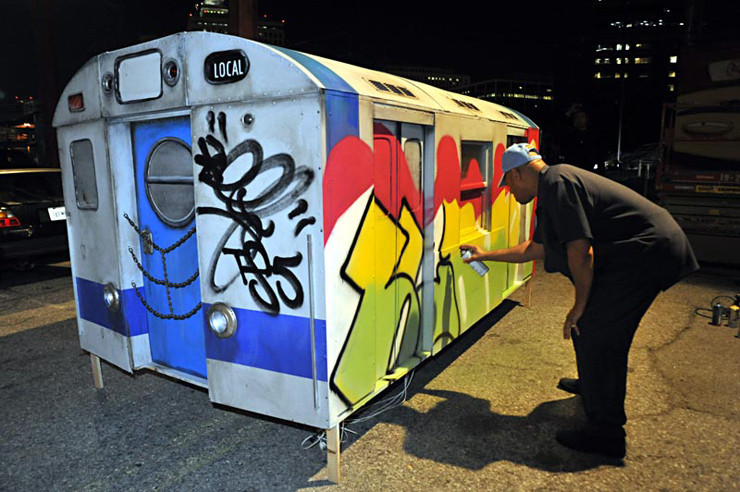 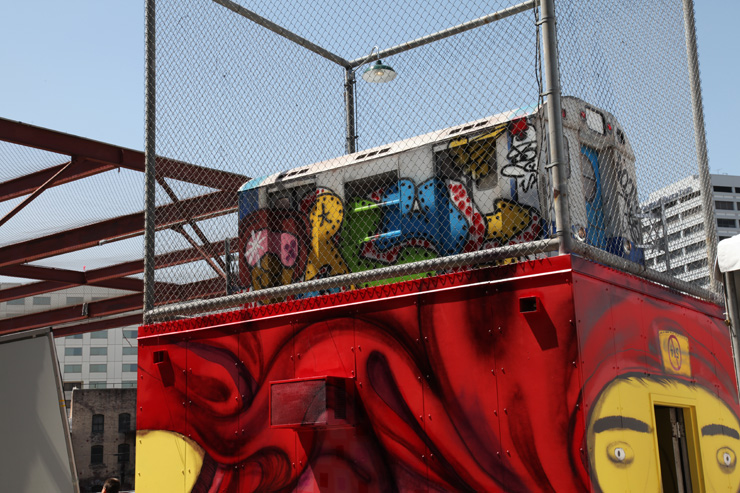 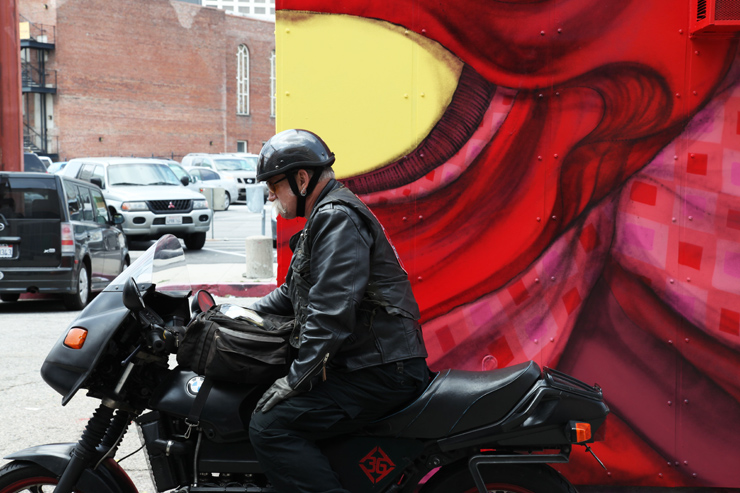 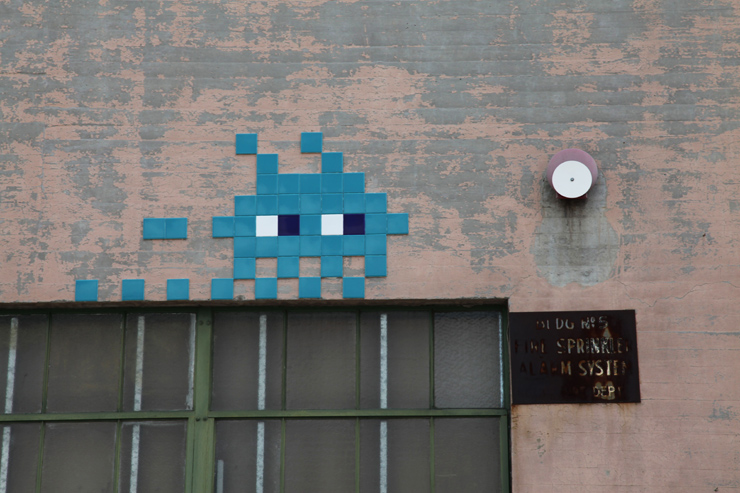 Invader’s “Blue Invasion” of the museum starts outside. Or is that BLU invasion? (photo © Jaime Rojo) 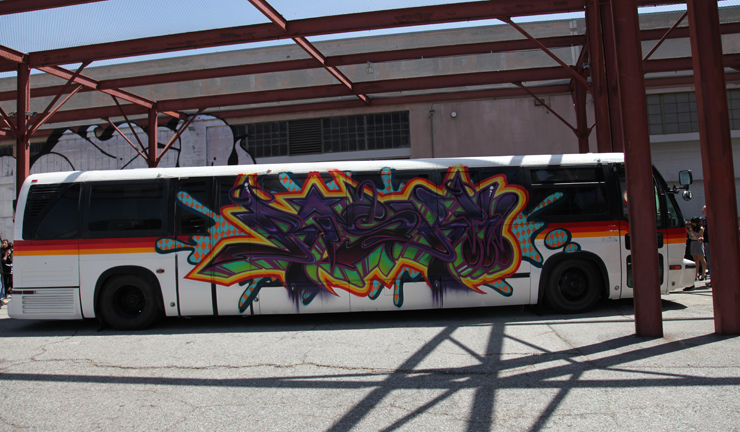 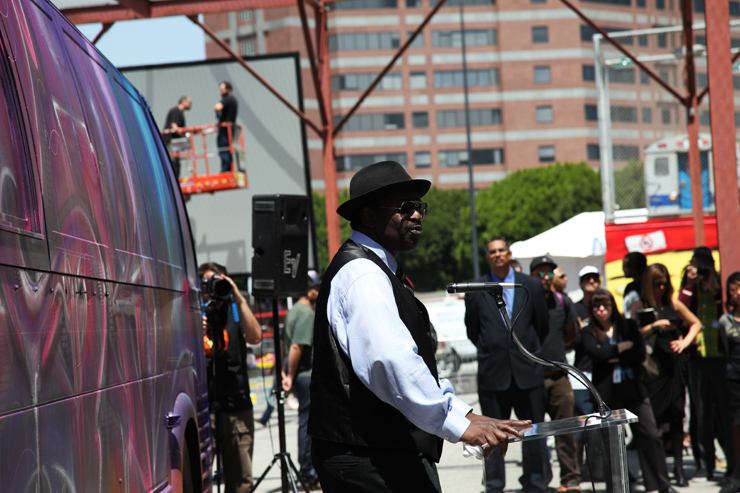 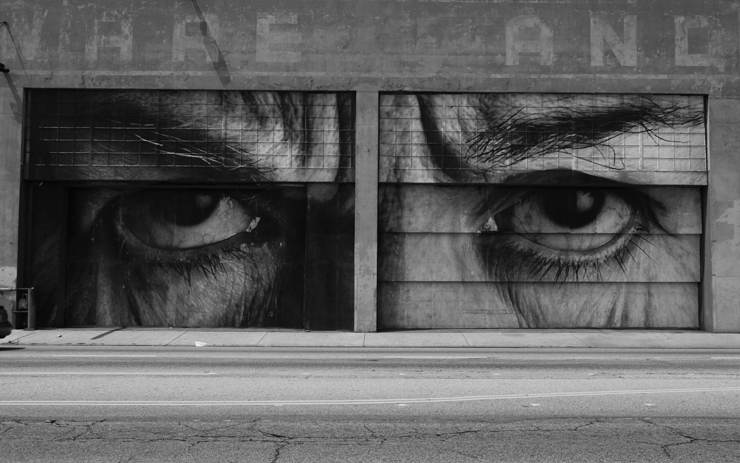 Not all brows are unfurrowed for the impending opening of “Art In the Streets”, as in these by French Street Artist JR (photo © Jaime Rojo) 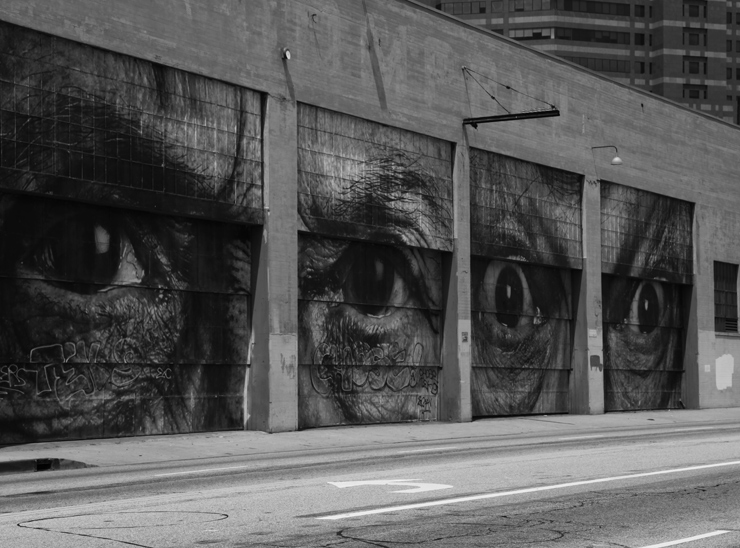 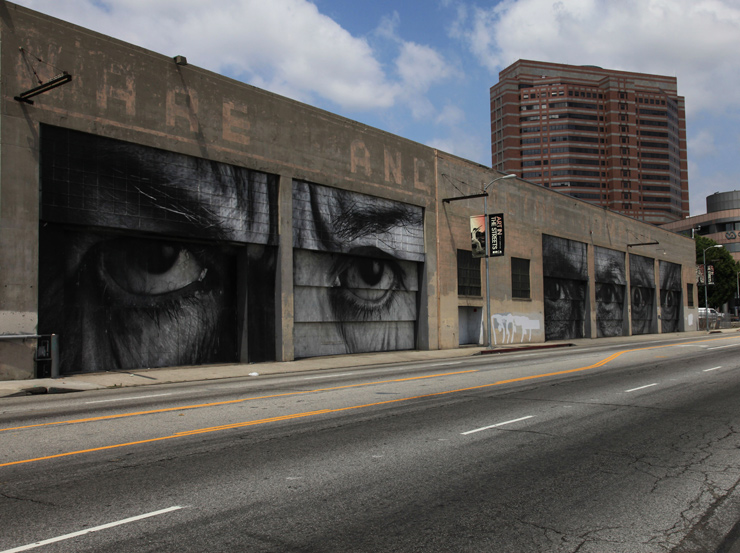 Fintan Magee & Guido Van Helten in Tehran : "The Carpet Repairmen"
Welcome to January 2 and you may be feeling a little more lethargic as you go through your duties today, looking askance at the empty bottles, stray glitter, the new rip in the rug. Yes, there is some...
Tilt Smashes With Multi-Hued Tags: "Magic & Destroy"
“When does an ultra-tagged trash can, which some consider simply vandalized, assume the status of a work of art?” asks Stephanie Pioda, the art historian and journalist in the introduction of this 3 y...
BSA Images Of The Week: 10.18.15
Groovin' on a Sunday afternoon.... This week was full of great Street Art stories - the main one everyone was talking about was fake TV graffiti by the Egyptian Street Artists who hacked the prop...
Sandra Chevrier and "Cages"
With precision and guile Sandra Chevrier has painted a female world that is sophisticated, unreachable and appealing, whether painted on canvas, street mural, or stuck to a wall in the margins of a ...
Los ALCÁZARES in Murcia, Spain - Murals by the Mediterranean
“Los Alcazares has a population of about 16,000 inhabitants, next to the Mediterranean Sea -in fact it is on the edge of an inland sea called Mar Menor,” says photographer Luis Olive Bulbena of this r...
Able Art In The Streets Augustine Kofie Barry McGee Blade Brooklyn Street Art BrooklynStreetArt.com CA Cern1 Fab 5 Freddy Futura How & Nosm Invader Jaime Rojo Jeffrey Deitch JR Lee Quinones Loomit Los Angeles Martha Cooper MOCA Nomade Os Gemeos Push RISK Saner Seno Shepard Fairey Steven P. Harrington Sullivan