It’s not that light artist Chris Jordan didn’t find the sweeping supersonic jet-shaped façade of the church inspiring. He just wanted to make it visible again to the people in town.

Hallgrímskirkja, the Lutheran church in the center of Reykjavík, with it’s soaring steeple and outstretched wings it has been an architectural icon since it’s completion in 1986 and anyone first laying eyes on the largest Icelandic church is usually impressed by it’s command and design.  And yet, somehow even pivotal architecture can disappear before our eyes due to familiarity and it may take a visionary talent like Jordan to bring it back to our attention with animation, mapping, color, and pattern. 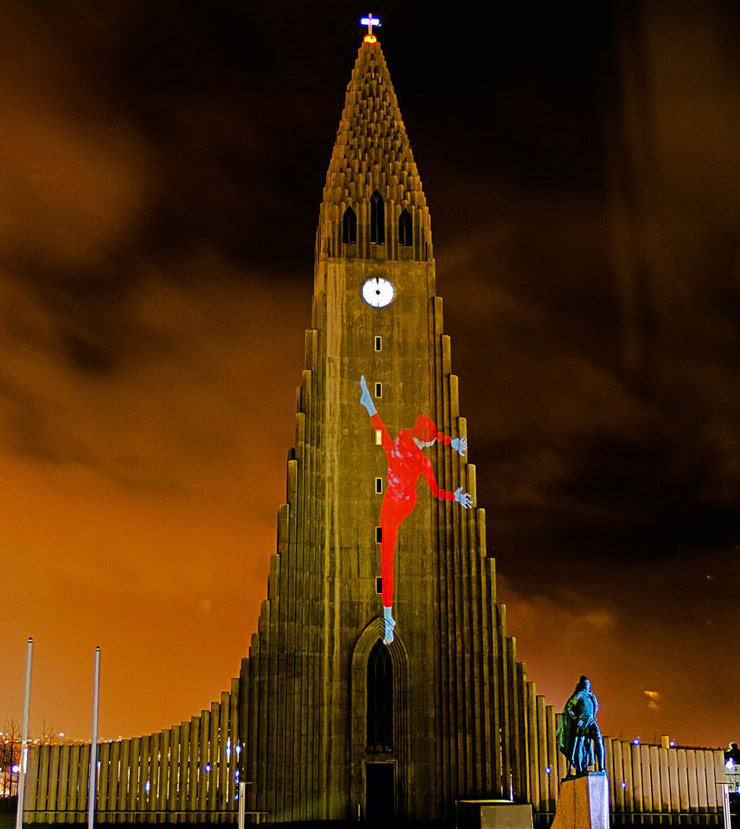 From his home in New Yorks’ Chinatown, Jordan, who teaches interactive design at Baruch College and New York University, talks about his work in the same way that Street Art is often credited in the urban environment: art as activation.  “Activating is about changing people’s perceptions of overlooked or invisible spaces. A building can become an archetype, invisible, like for a New Yorker, for example, the Statue of Liberty. You look at it, and it disappears into the thousands of times you’ve already seen it. So for me, this light project was so exciting because here’s this massive landmark church that this whole town can’t see anymore.. made completely fresh and new. To see that reflected back at me through the faces of viewers was exhilarating.” 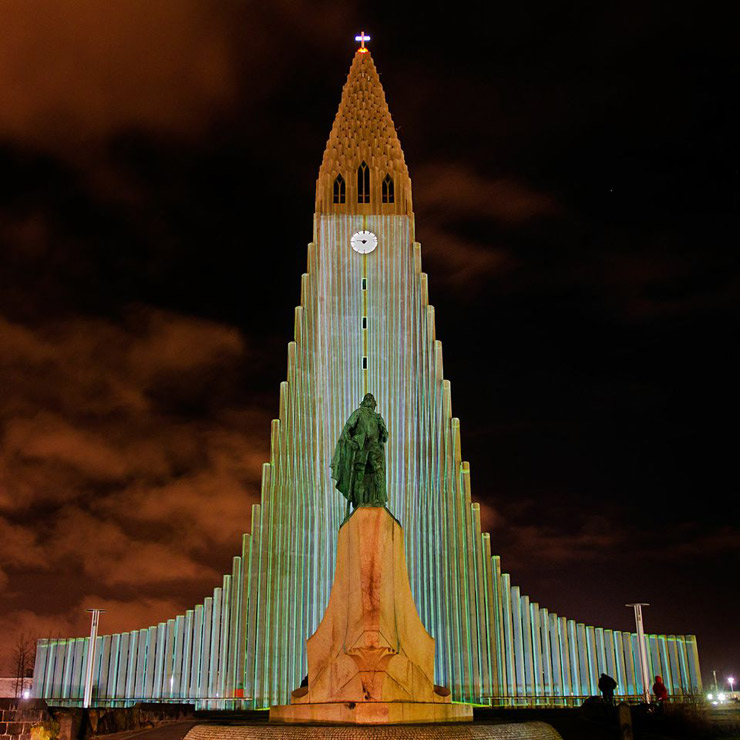 That observation perhaps was the pinnacle of his Icelandic experience in February when he camped out in front of the church over four days in the back of a box truck with his collaborator Marcos Zotes, a handful of computers, three projectors, and a low budget. Together they created a series of site-specific video performances that brought to life Zotes’ idea for a project called Rafmögnuð Náttúra.

The two had met while Jordan was performing his 24 hour timelapse of Hurricane Irene inside an engineered cloud at New York’s Bring to Light Festival last October. Zotes asked if Jordan would like to collaborate on a project to illuminate the 150 foot wide façade of a church in for the Winter Lights Festival in Iceland.  Since Jordan has over the last decade created installations appearing at MoMA, The New Museum, The Whitney, The Museum of Natural History, The Chelsea Museum, in Times Square, and many unusual places in between, he had a good idea what cool stuff he would like to do. With the free help of other artists, software designers, and even NASA, Jordan brought a mind-blowing façade to the church that Zotes had only imagined. 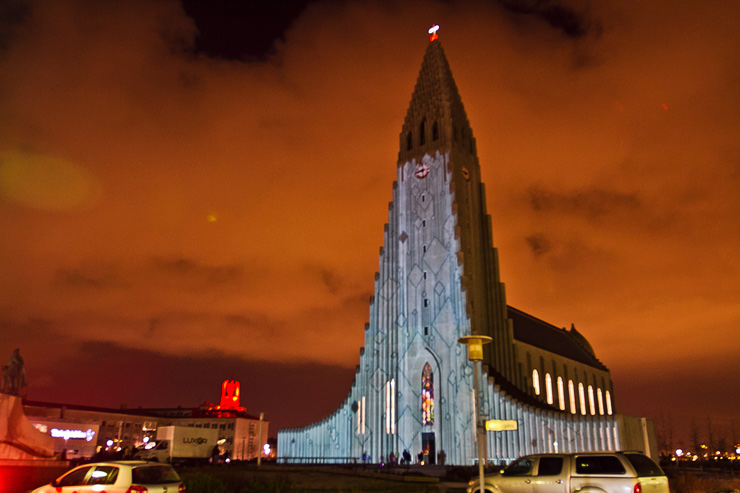 “We collaborated on how we could, with a very limited budget, create something spectacular for the festival,” explains Jordan.  “We knew that the majority of the budget would be going for projectors so we called our friends up to help us with creating animation sequences that could be mapped to the facade, in triple-HD resolution.”

“We developed a workflow and a template for each animator to follow; then compiled the animations together into a final 15-minute composition. In addition, I contacted friends at NASA for solar imaging data, and created animations using graphic and solar elements. The dream was to have northern lights over the building with the accompanying solar data displayed. Although the solar and earth weather didn’t collaborate, the animations of the sun in a dark cold city on this Norse façade were very appropriate and powerful.” 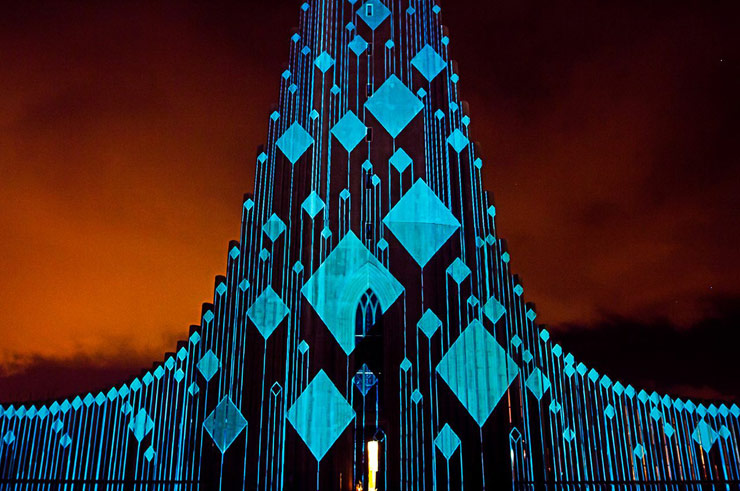 Jordan’s work over the years has included explorations into memory, and elements of photography, film, interactivity, and projections. We talked with Jordan about traveling to Iceland, transparent ideas, the importance of community, and what a light artist has to go through to reactivate an icon.

Brooklyn Street Art: Can you talk about the trip to Iceland?
Chris Jordan: We went to Iceland with just one day before the opening. The Icelandic people were incredibly accommodating, and set up three massive projectors inside a box truck, with a massive piece of glass mounted on it. The box truck became our projector-heated cabin in the center of Reykjavik for four days. Location is everything! It was a great setup. The projectors were aligned and from there I mapped the content using the software MadMapper by Garage Cube. Garage Cube are also friends of mine and they  helped me troubleshoot the tech issues the day before. The opening event had the band For a Minor Reflection accompany us, right after the mayor of Reykjavik introduced the festival to the audience.

But the day before this we went through myriad technical issues. Many times I thought this was going to either look horrible, or crash altogether. There was no budget for a backup computer, or to test the entire setup beforehand. Luckily, Iceland has an early sunset, so we gleaned a couple crucial extra hours to configure everything. The mapping was completed literally seconds before the mayor spoke. It all went off smoothly and the people that braved the intense horizontal-downpour cheered. 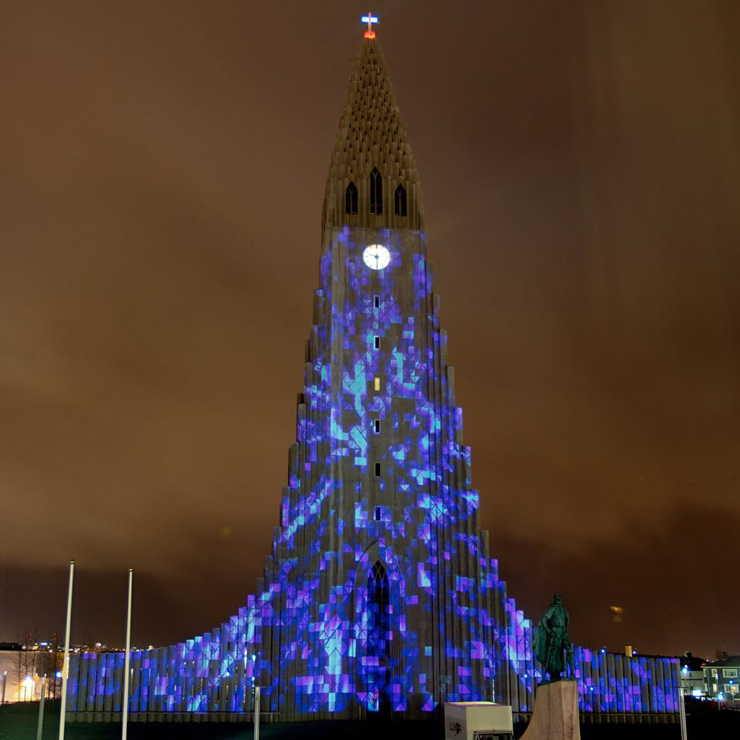 Brooklyn Street Art: You managed to transform a landmark into a completely different light using your creativity.  Doesn’t that feel pretty powerful?
Chris Jordan: Yes. It was pretty fantastic we were able to do this on such a small budget. It absolutely required a community to make happen. When our main computer failed, the Icelandic underground came to the rescue. One person there offered graphics cards he’d had in a drawer. Another brought us snacks from a nearby cafe. That community effort is really what made this project powerful for me. 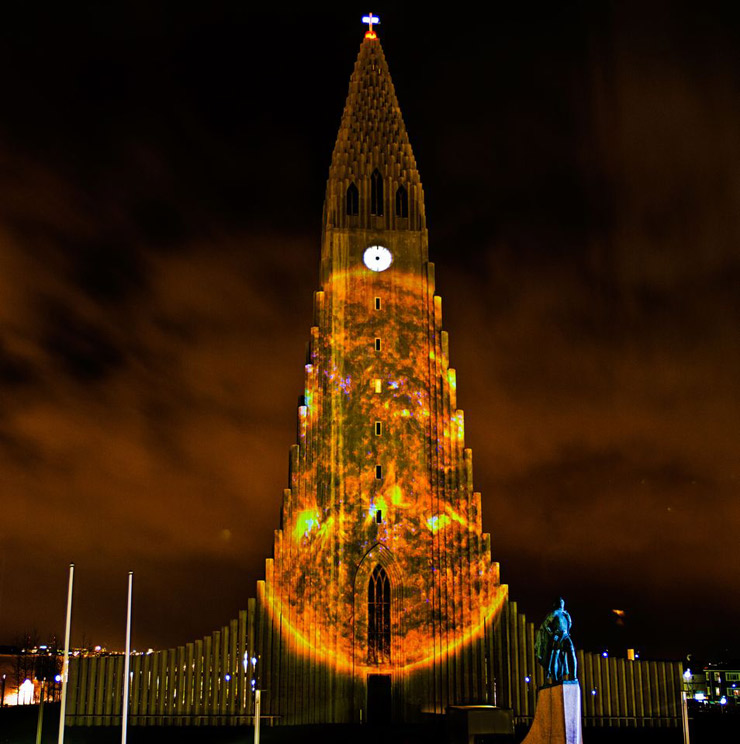 Brooklyn Street Art: You were given no budget whatsoever, aside from a plane ticket and 3 projectors. How do you plan for a live performance with the inevitable technical issues?
Chris Jordan: Years and years of failure. I read an Edison quote the other day, “If you want to succeed, double your failure rate”.  I’m also a huge proponent of transparency, modularity, and scale. These tenets allow me to see unique solutions to problems, and find compelling solutions. Light art is still maturing as a public medium, as last November’s Occupy Wall Street “Bat-signal” projections attest. It’s a wide-open field for creative expression. 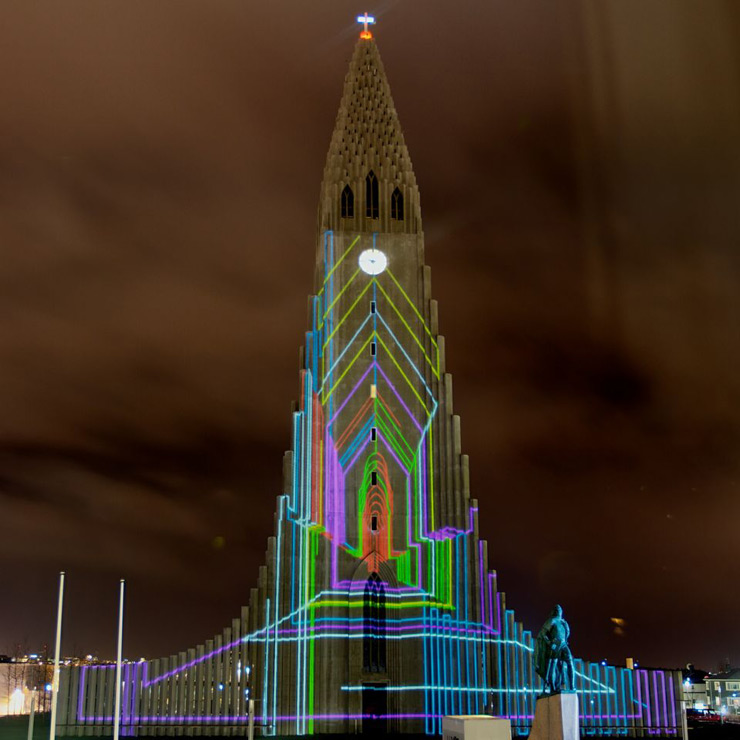 Brooklyn Street Art: Without revealing your trade secrets, is it true you plan to introduce more community interaction into your future work?
Chris Jordan: Always. There’s an axiom I live by: “There is no art without politics”. You either choose to engage it, or you choose political apathy. This ties in with ideas around real-time performance and feedback. I hate the word “rendering”, as it equates to “pouring concrete” on ideas that demand continuing dialog. “Trade secrets” imply hoarding of knowledge. I only want to work with transparent ideas and accessible technologies that ‘spotlight’ the individual’s role in society through creativity. I try to live an open-source life.

Brooklyn Street Art: What role does community play in this project and in your philosophy?
Chris Jordan: I love interacting with communities and to give them the control to create dialogue. This fascinates me, and informs my work constantly. My next long-term outdoor installation is on Governor’s Island, where I’ll be engaging the broadest spectrum of people on the planet (New York) in playing and building, using buckets and stop motion photography. For me it’s all about the community. Without it, we are making monoliths to our egos. 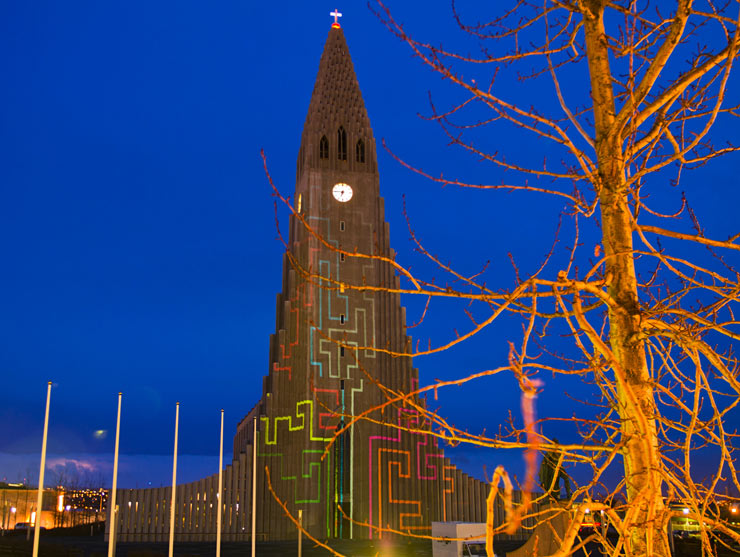 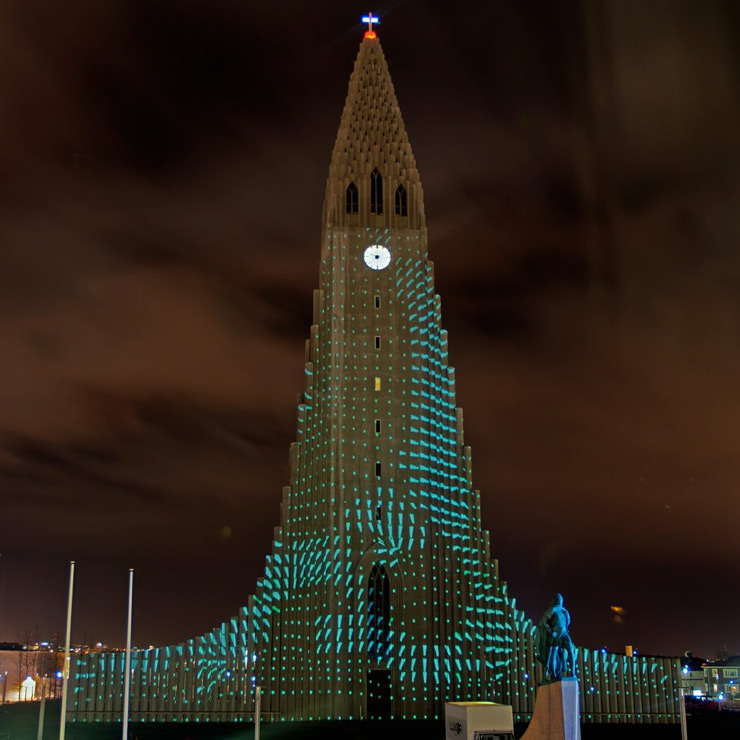 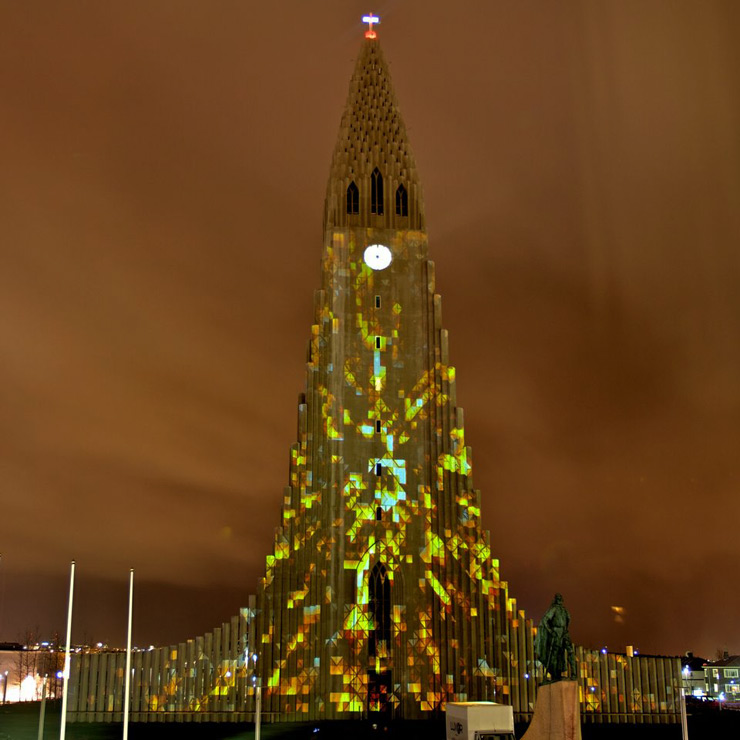 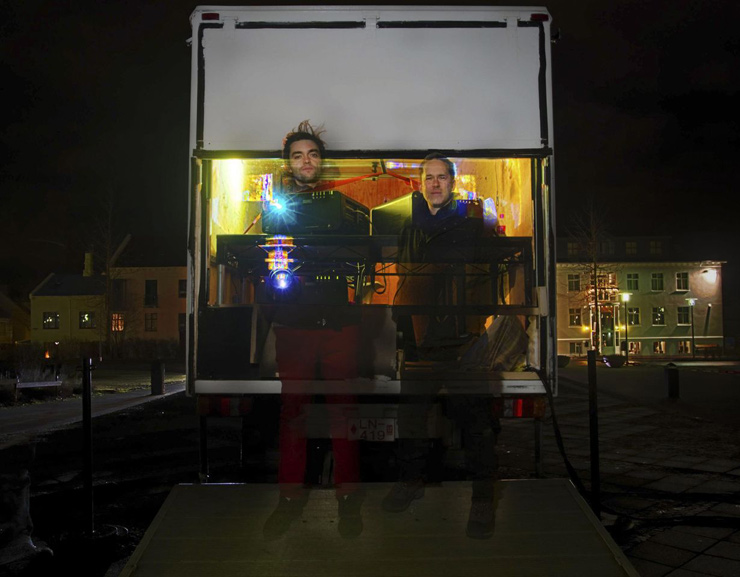 Marcos Zotes and Chris Jordan on the back of their box truck. (photo © Enki) 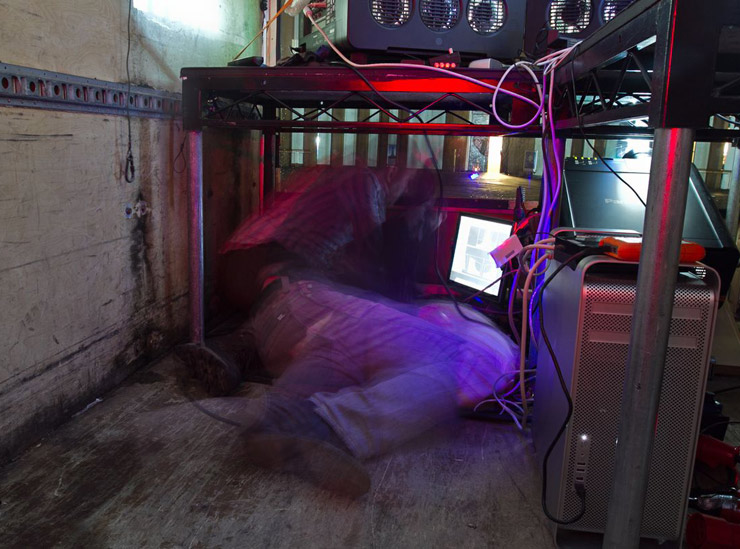 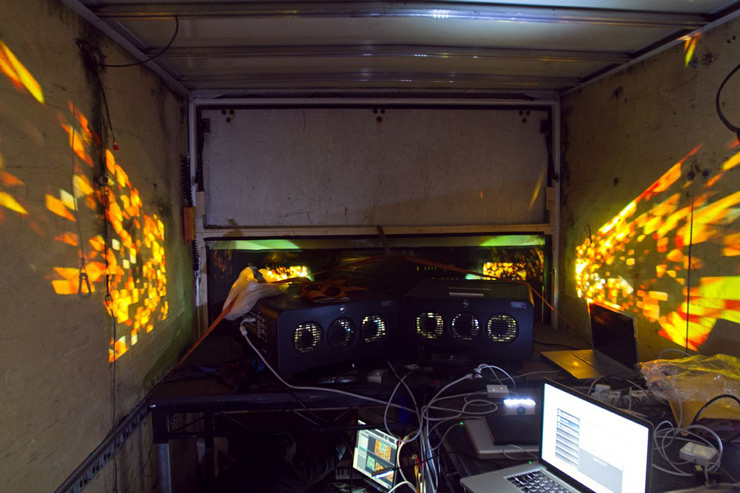 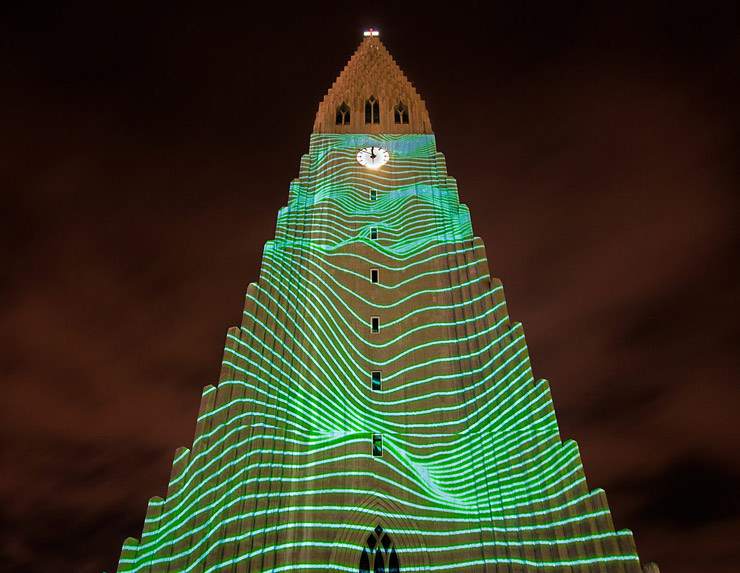 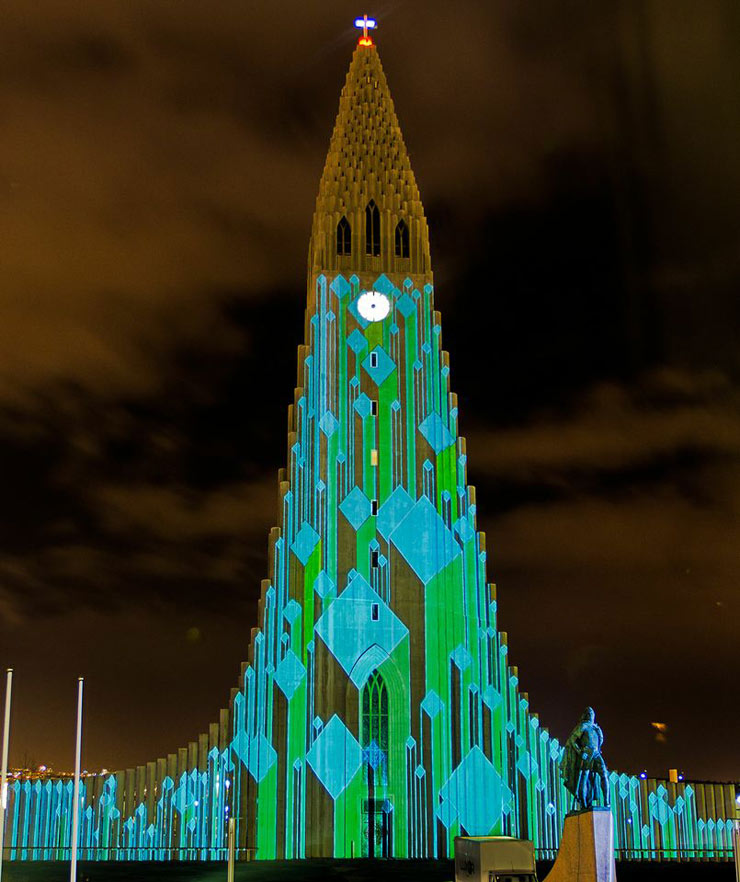 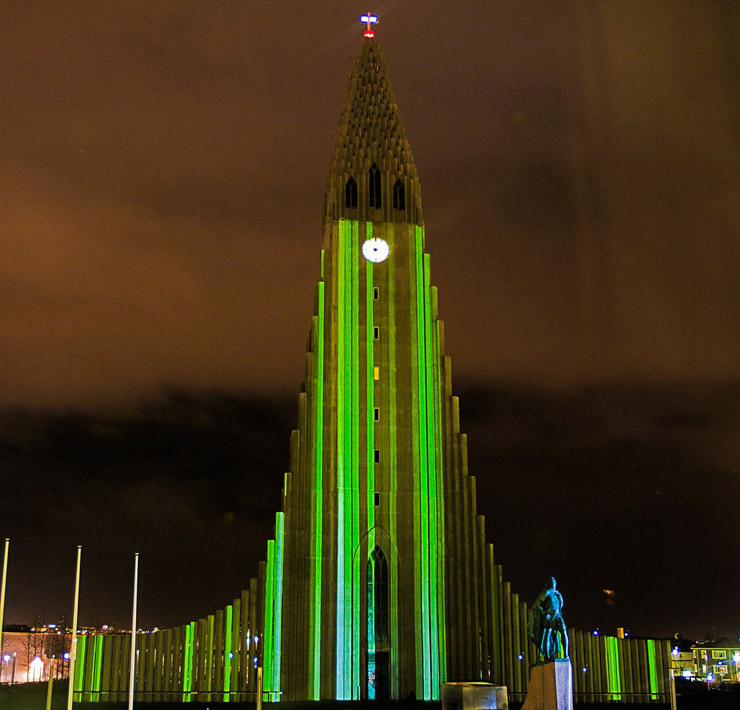 With very special thanks to Enki for sharing this incredible photographic story.

We would also like to recognize the other creators and contributors to the project:
Animators Thessia Machado, Noa Younse, Andrea Dart and Steven Tsai
Performer Coco Karol
Videographers Azmi Mert Erdem and Raghul Sridharan
Photographer Enki
and the music group For a Minor Reflection
The Hallgrímskirkja was designed by architect Guðjón Samúelsson

Fairey & Friends Respond Graphically: "We The People" & Women's March Posters for Download
If the popular response to this poster campaign is an indication, there will be many in the streets. The “We the People” project with Street Artist and activist Shepard Fairey, Ernesto Yerena and Jes...
John Fekner (with Don Leicht and Brian Albert) "Hymn 2020" / Welling Court Mural Project NYC
A recent street stencil work by John Fekner, Don Leicht, and Brian Albert is a reprise, a sad reminder that the legacy of racism in the country has been with us for what seems like forever. During an...
Vlady Art: Storing "Temporary Files" Under a Stockholm Bridge
Writing large messages with sticky post notes is part of the visual lengua oficina* for many whose career ladder has been in corporate offices for years, decades. Stockholm based street artist Vl...
Images of the Week 05.01.11 - May Day
Our weekly interview with the street hits some bright notes including new arrivals from El Sol 25, Specter, and Faile along with some shots Futura did of HAHA in Melbourne and even a taste of Kentuc...
MurOne "Video Games" for Contorno Urbano 12+1 Project in Barcelona
“I don’t have a job and a stable life, but painting and giving life to places that don’t have any is very gratifying,” says the graffiti/Street Artist about his wall completed for in September for the...
Andrea Dart Azmi Mert Erdem Baruch College Bring to Light NYC Chris Jordan CJ Coco Karol Enki For a Minor Reflection Guðjón Samúelsson Raghul Sridharan Hallgrímskirkja Church Iceland Jaime Rojo Marcos Zotes MOMA New York University Noa Younse Reykjavik Reykjavik Winter Lights Festival 2012 SeeJ Statue of Liberty Steven P. Harrington Steven Tsai The Chelsea Museum The Museum of Natural History The New Museum The Whitney Thessia Machado Times Square