D.I.Y. Cartography in the Rawest Section of Somerset

Street Art is intrinsically bound with its neighborhood and location in a city. Context and placement are key, establishing its relation to a place. So when a Street Artist is asked to create art about mapping a place, it is fascinating to see how they perceive it and with what manner and medium they present it.

In a new exhibition opening in London this month, the time honored study and practice of cartography ventures into the conceptual as well as the physical, and we find that for many artists the street is as much about poetry and perception as it is about aerosol and wheat-pasted paper. 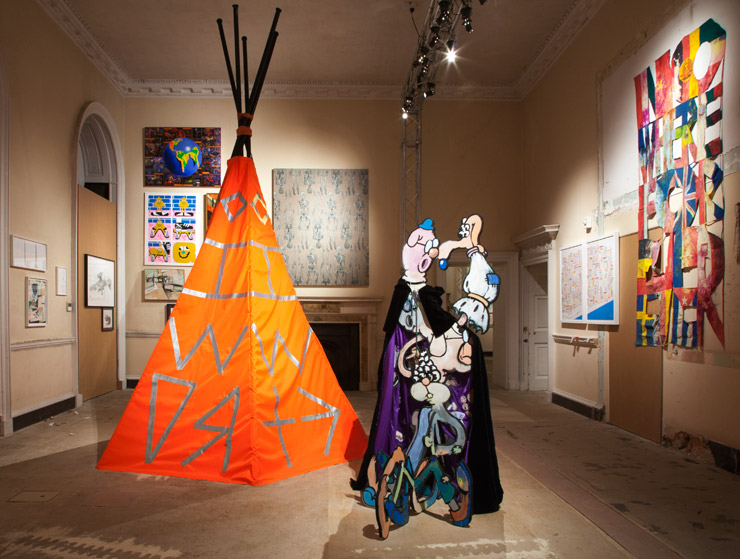 “Mapping the City”, now going up at the Somerset House presents the work of 50 artists whose roots lie in creating work for the urban space, one defined by paved streets configured by planners and traversed by citizenry. More than this the artists here broaden the job description of cartographer to one who captures energy, movement, emotion, imagined storylines and life paths.

With ubiquitous smart phones at the ready we increasingly find that mapping the world has become a given, removing some of its mystery. The tracking of GPS is joined by the physically surveying Google machine and countless public/private war/profit apparatus that have been loosed across and above the skin of the globe to trace all roads and streets, quantify topography, measure depths – even gauge the volume of rivers and density of forests. 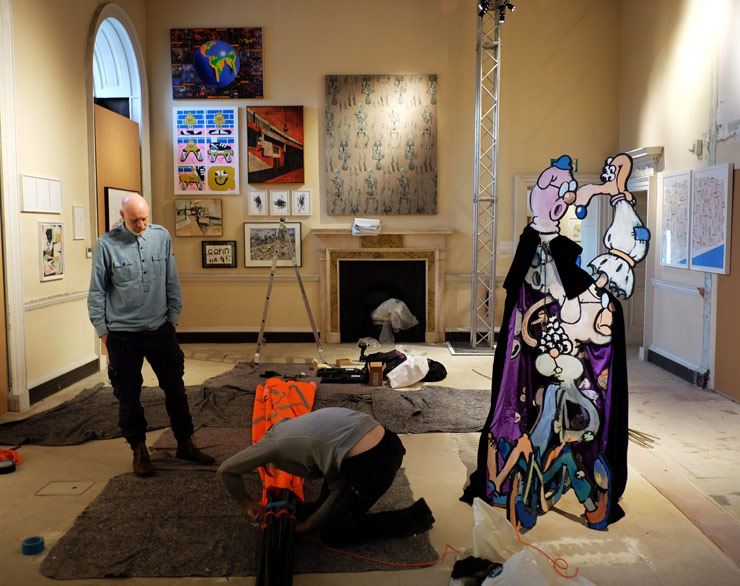 And then there are the people. “The city is a living entity,” says Rafael Schacter, curator of the show from the arts organization A(by)P, who sees the city as something far more than a clever configuration of lines. “The city changes every day, every hour of the day. It is constantly modifying itself. And it is fully alive in the way it reacts and responds to our actions. It is endlessly fascinating in the same way humans are. They can be exhausting, they can be destructive. But they contain endless possibilities too.”

It’s this same immersion into street life that draws artists to create in public, and knowing how to accept and embrace its evolution is what brings the veterans back. MOMO literally painted many streets in one continuous line that formed the letters of his nom de la rue in a 2006 tag that spread across the bottom of New York’s central island and it is presented as a map in this show.

Brooklyn Street Art: One of the artists in your show, MOMO, created an enormous tag in Manhattan – although it was only legible when the route was retraced upon a map. Is he crazy?
Rafael Schacter: He is crazy. A crazy genius. Although you still can see the marks he made on the streets of Manhattan years after he painted it! He recently re-walked the route and re-mapped the existing line. As I said; Crazy. Genius. 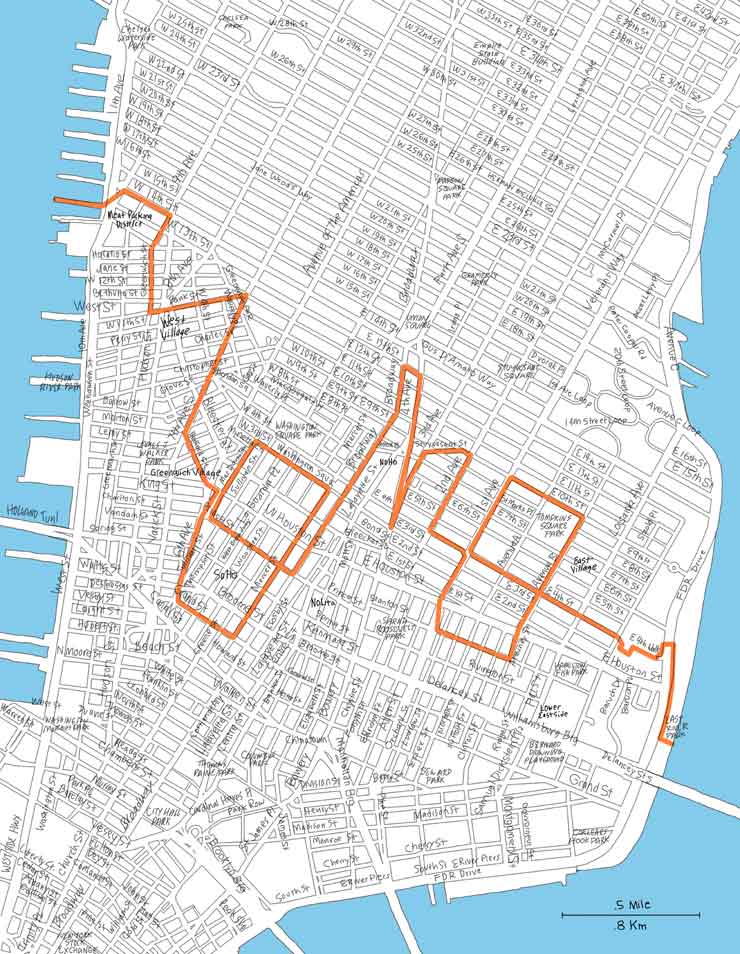 “Retracing the tag line was cool,” MOMO tells us. “What I noticed is how much new sidewalk cement has gone in – a lot of the line was eaten up by that,” he says, observing that a city is anything but static and often regenerative. “It is interesting how quickly a city replaces all of its cells,” he remarks about the ongoing repaving that characterizes the city. Were there more changes MOMO noticed in the 7 years between tagging? Yes. “Other stuff, like all the shiny new developments that are making Manhattan look like a mall.”

While there are some commonalities among the selected artists who are participating in this project, there is quite a variety of approaches to the street, as Schacter invited Street Artists, graffiti artists, public artists, designers, painters, illustrators, and billboard jammers. He says the multiplicity of interpretation was an intentional decision.

“For us, the most important thing was to have the whole range of artists we love and who are producing work in the public sphere included in the exhibition. As such, and as you say, it really is a very wide variety of artists, from graffiti bombers to conceptual artists, from muralists to urban explorers. With all of them, however, the crucial element within their practice is the public sphere, the richness of the city and urban space. This is the line that goes through all of their work, even if they may at first seem widely different.” 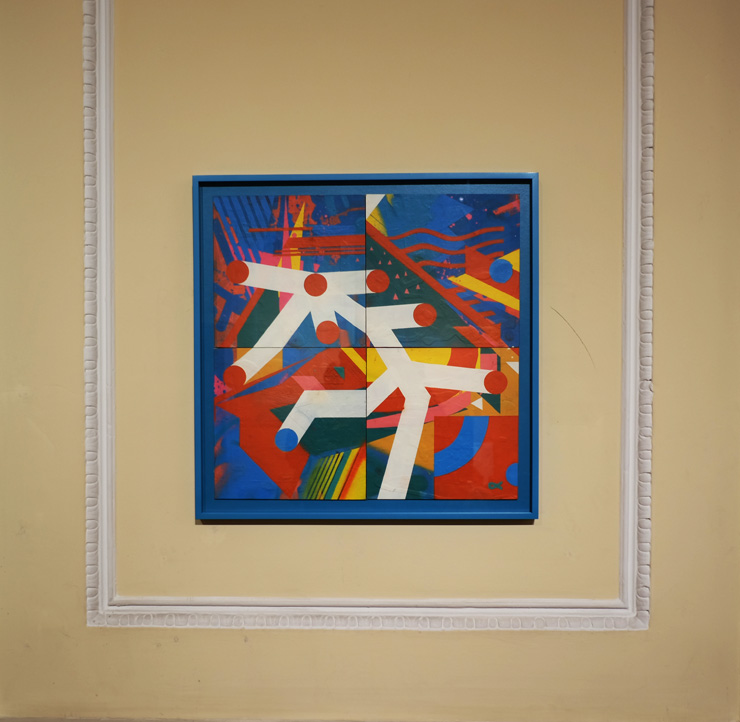 Chu, an Argentine Street Artist and muralist whose colorfully painted four paneled abstraction remixes and jumbles the lines and shapes and removes all text, his map is meant to communicate the kinetic nature of street life. “I tried to create a map of Buenos Aires marking my usual movements around the city. I am used to moving around it a lot, from one side to other, and sometimes it is really chaotic and stressful. However it is also really where I get a lot of inspiration.”

A viewer of Chu’s graphic representation may be reminded of map making software and apps – possibly because of his graphic design training and his work as an animation director and illustrator in the digital sphere. He says that his digital art experience has grafted onto his vision of the physical street, “especially because I am working with layers and some of my choices of shapes come from that experience.”

Even as a painter, you can see the influence of the digital design world in Chu’s map. He says that when he thinks of city streets, he does see in his mind an aerial view of them from up above, but there is much more.

“My artwork for the exhibition is a kind of aerial abstract view of the city,” says Chu, “When trying to understand the city street more mentally, I believe today, it is something more complex than it was before. It is like some kind of constellation or hypertext thing that grows up in all directions, with axis and tons of layers.” 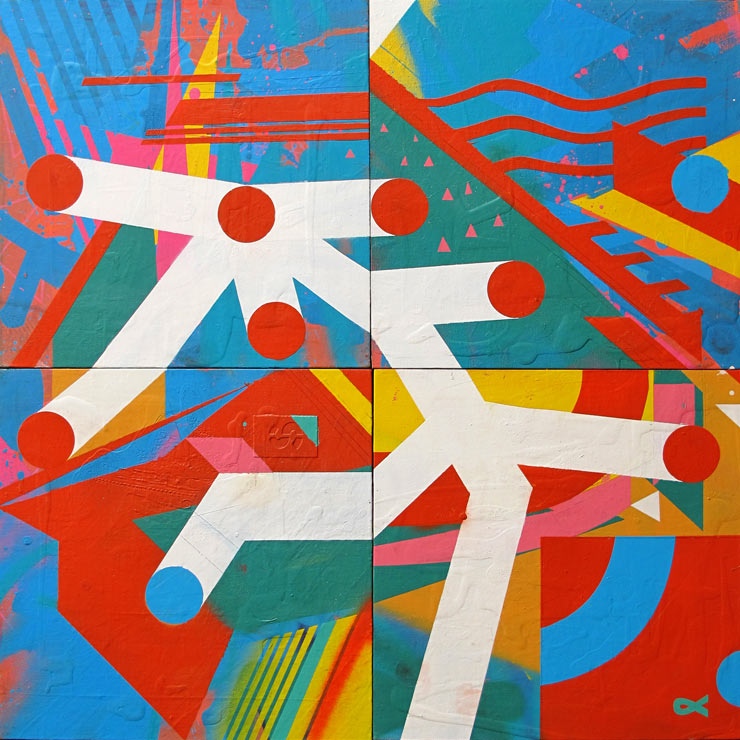 Housed in a section of Somerset House that has been closed off from the public for 150 years, the new exhibit is also its first and most visitors will never have hiked through the still unpolished space. It seems like the perfectly shabby cream-colored raw environment that graff writers and Street Artists might feel comfortable making art for. “It’s in the process of happening,” says Schacter as the team moves around him and up ladders to place the maps and straddle patches of exposed wall. According to Rafael, even the ceilings of the 18th century rooms are being restored to their original splendor, “with Yak Hair in the plaster!”

Brooklyn Street Art: Will people need to follow a map to find this show in the new wing of the Somerset House?
Rafael Schacter: Ha! Kind of. Our space hasn’t currently even got a name as it’s so new – and so old at the same time. We’re going to make big wooden arrows to make it clear but we kind of hope people get lost too, and then eventually find us! 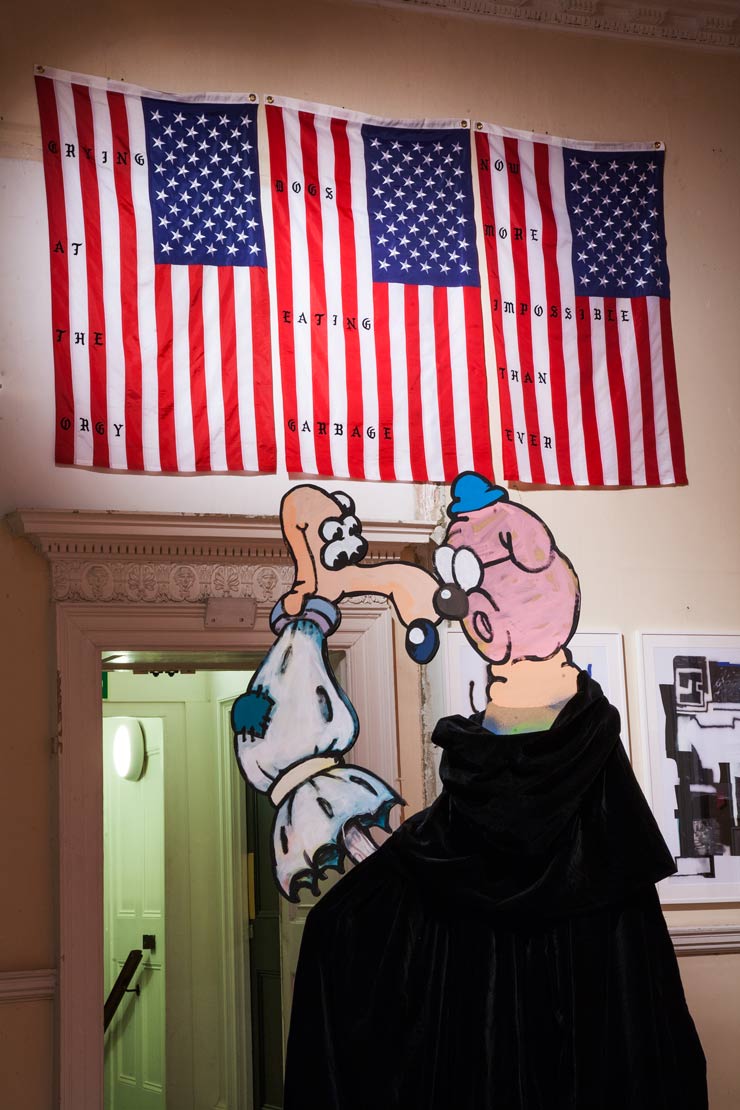 Brooklyn Street Art: Not all participants strictly adhered to the realm of cartography in the conception or execution of their map. Brad Downey appears to have drawn a face. Imagine what you would have gotten if this was a show about clouds.
Rafael Schacter: You’re right – the responses to our call for work has been super super varied. But that’s exactly what we wanted – that variety of work. We didn’t want just one understanding of the call, which was simply “map your space”.  Brad’s work is about finding visuals within maps, whilst others have tried to find maps within visuals! It is all simply about a different appreciation of space from the one we see in the top down, topographic, scientific standard. 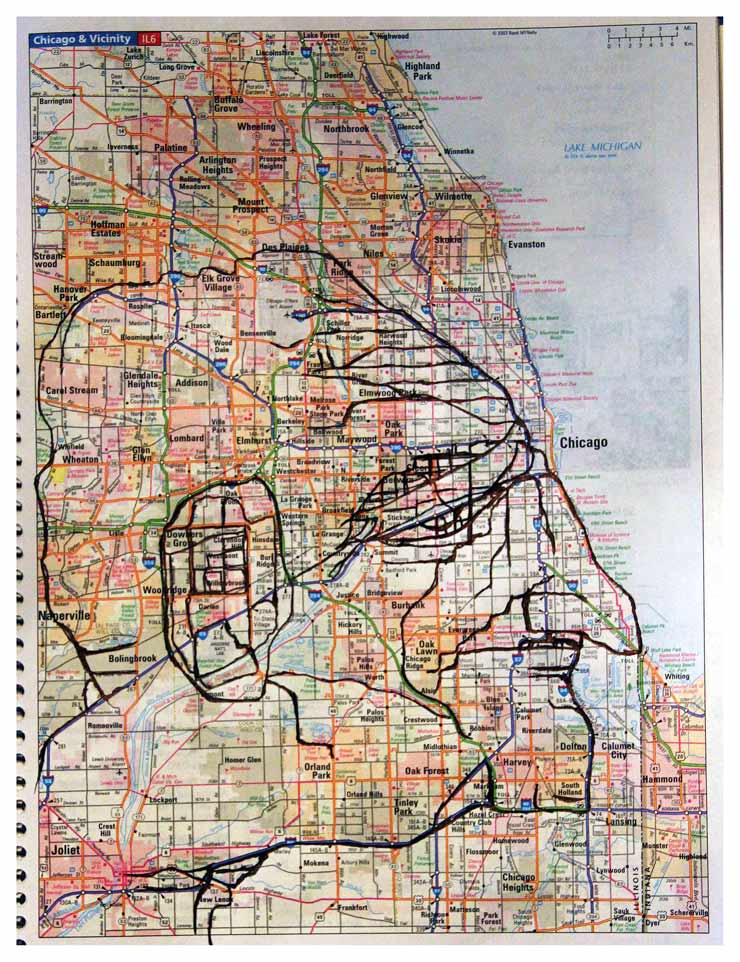 The Brooklyn Street Artist Swoon contributed one of her iconic images of a woman whose entire form is filled with what appears to be kutis and stilt houses along winding streets from top to bottom. Based on the Thai capital Bangkok, it is an example of the inner world Swoon is known for creating, reflective of a character’s history. 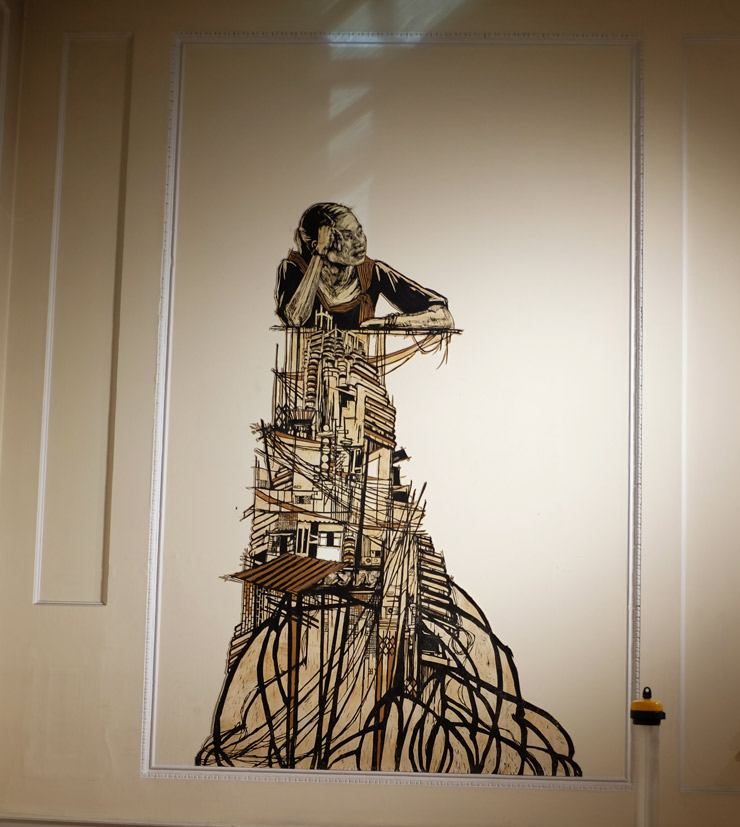 Brooklyn Street Art: It is always interesting to see a Swoon portrait that contains the city and the streets within the body of the subject, isn’t it?
Rafael Schacter: There’s a great quote from Swoon about her work being about the desire to more carefully examine the “relationship of people to their built environment”. Her work here is a prime example of this, a work in which the body and the city become inexorably intertwined – the experience, as she says, “of becoming part of the fabric of the city” visually mapped out. 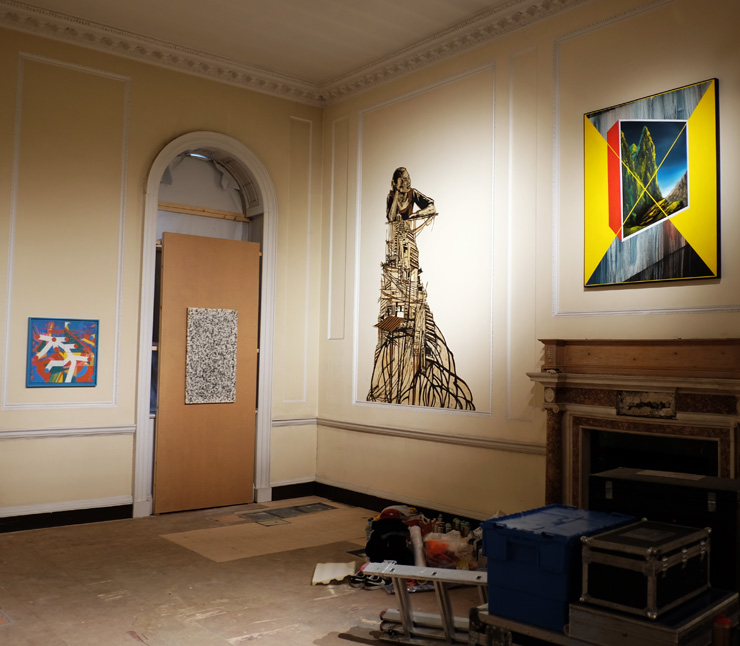 Brooklyn Street Art: Can you talk about the film/s you have discovered and will be showing that fall in with the theme of map-making?
Rafael Schacter: The films we’re going to be showing are by a filmmaker named Marc Isaacs. They’re both set in London, both exploring the lives of “ordinary” Londoners. It is a very bottom-up, grass roots understanding of people’s lives.  That is exactly what we’re looking to do in the show – to explore the subjective and the hidden nature of the city.

Brooklyn Street Art: Who will be doing an artist talk about the project?
Rafael Schacter: We’re really excited about this. Our artist talk will be featuring Eltono, Filippo Minelli and Caleb Neelon. Again, a real diversity of artists and a diversity of backgrounds. Each of them have a great understanding of the public sphere and we’re excited to see what they will present.

Brooklyn Street Art: Given worldwide mapping and its ubiquity on devices we must ask this: In the future, will it be possible to get lost?
Rafael Schacter: I hope so! As the artist Itso said, and I paraphrase, true places can never be mapped. 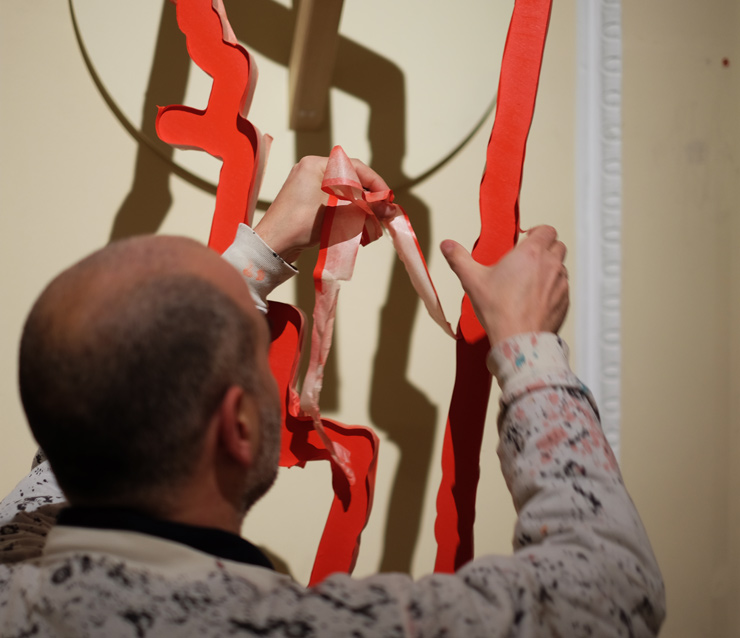 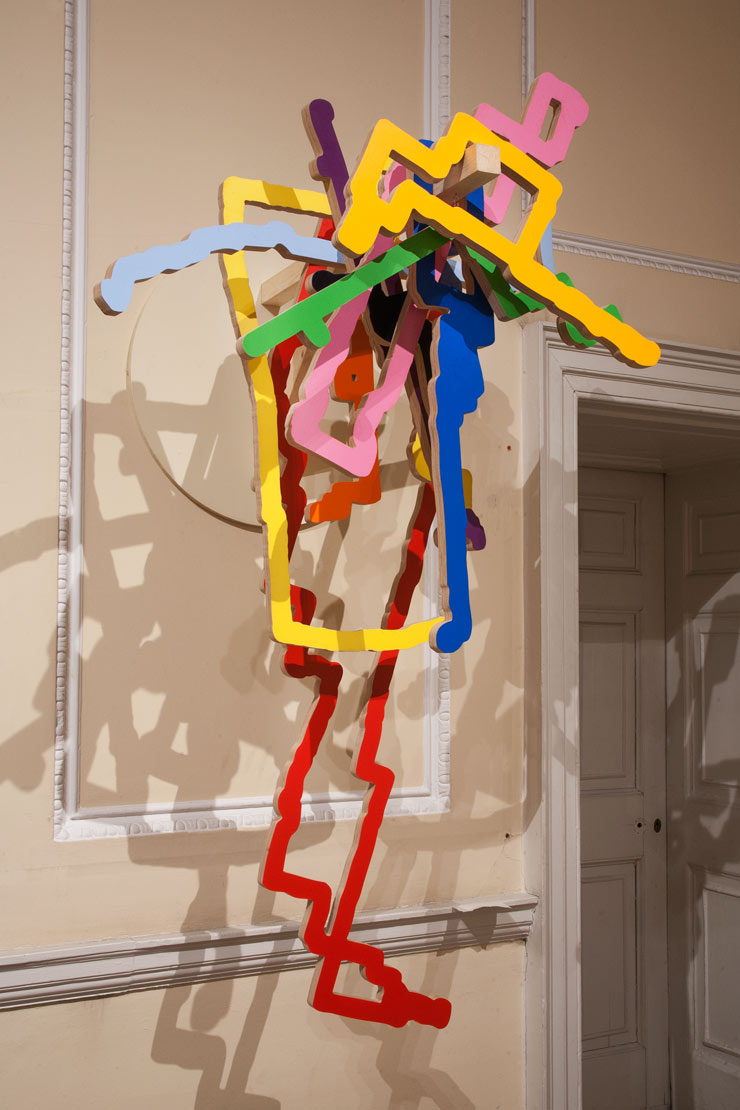 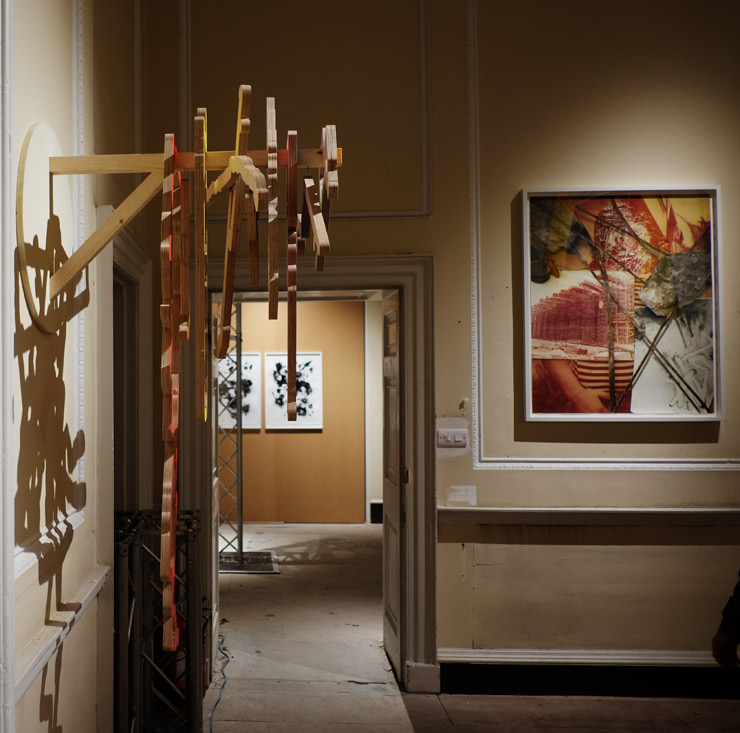 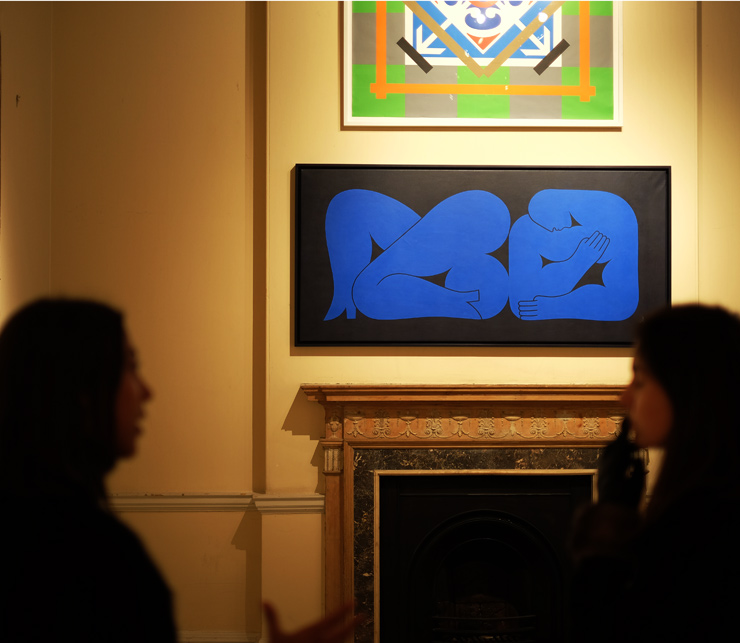 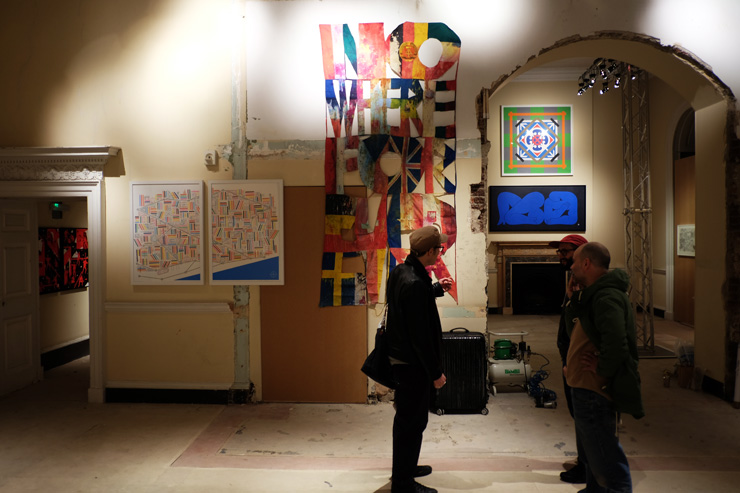 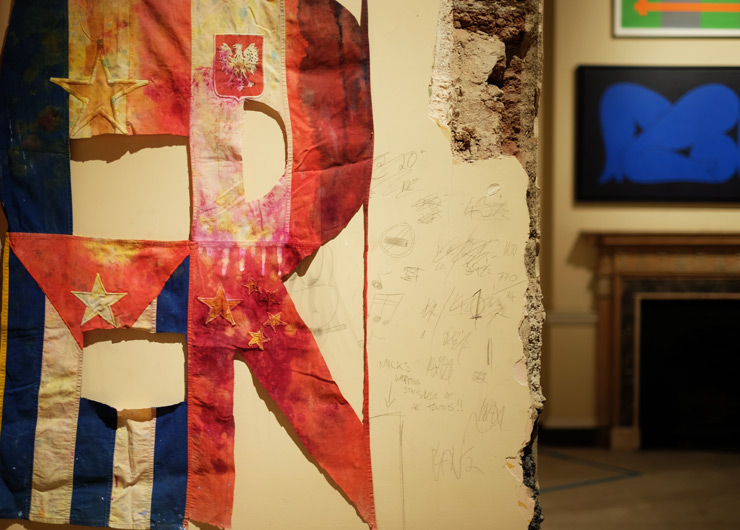 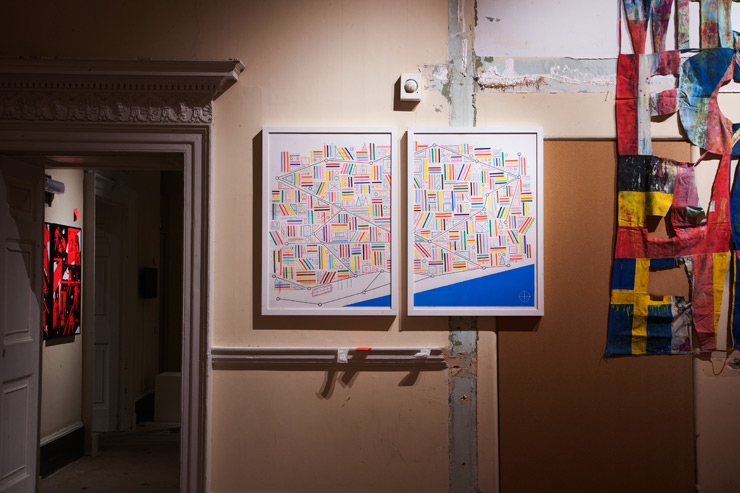 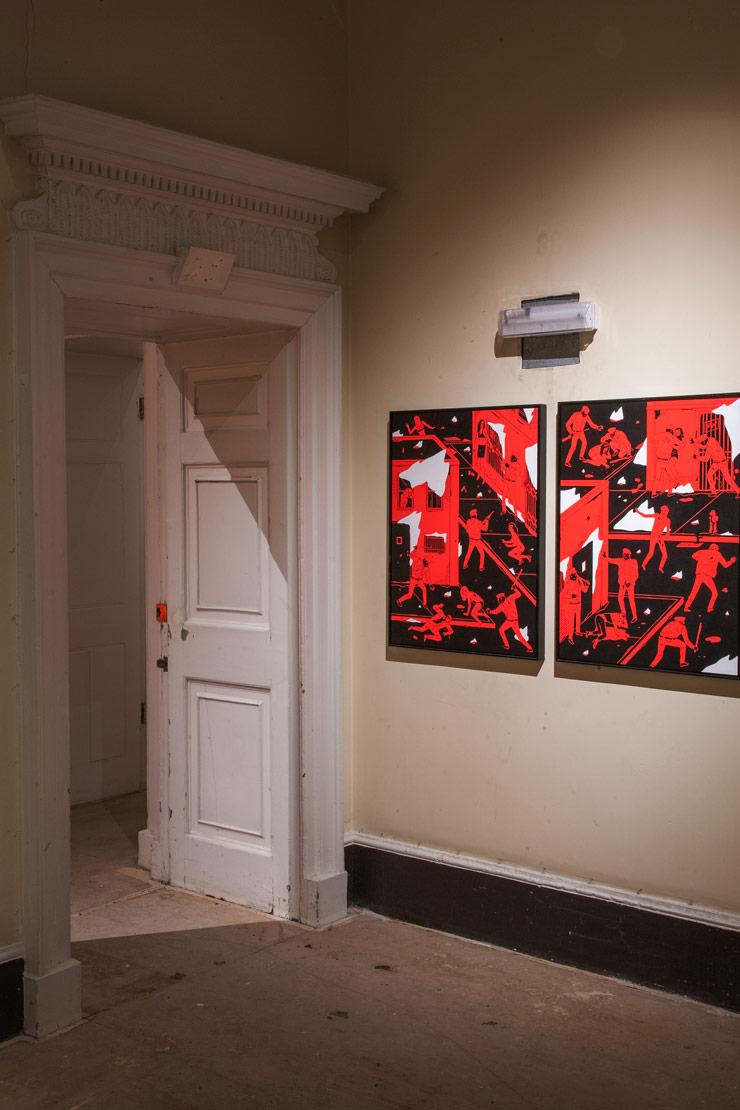 “Mapping The City” Opens tomorrow for the general public at Somerset House in London, UK. Click HERE for schedule of events, hours, directions and other details. 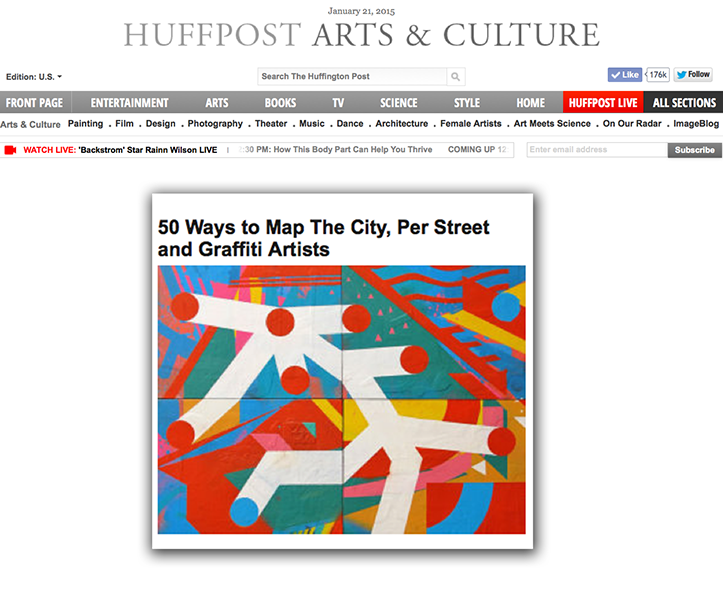