What’s better than hunting around back lots and alleys in Baltimore’s boarded up neighborhoods looking for Street Art? Having Baltimore native Martha Cooper as your guide, showing you all her favorite secret spots, listening to her stories, and meeting the neighbors, who all call her “picture lady”.  Open Walls Baltimore brought a lot of attention to the city this spring and we were lucky to see many familiar Street Artists and see the giant murals in process in the district where Gaia staged it.

But zipping through SoWeBo with the formidable hosts of Martha and her cousin Sally, who used to take the bus to school together through these streets a half century ago, leaves all that stuff in the shadow. With a natural radar for finding the unsanctioned, Martha is a blur, pointing in different directions and laughing and telling you about trailing Stikman up the street or hooking up Other (Toy Lovegates) with a spot – with much the same ease as she recalls stories of graffiti artists Dondi and Blaze and Lee in NYC rail yards in the 70s.  We’ve been happy to share our Street Art knowledge with her these last few years, and she always generously leads us to a head-scratching bit of gorgeousness that’s just beyond this alleyway, or tracks, or skateboard park, if you know where to look. We are most grateful for the sweet moments of discovery together. 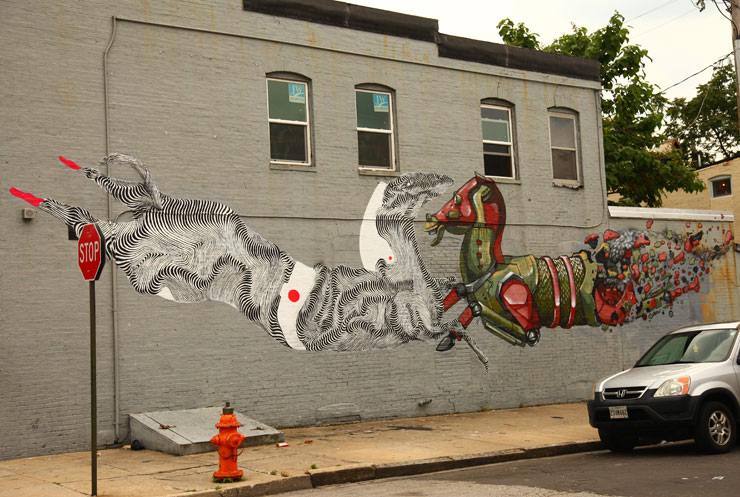 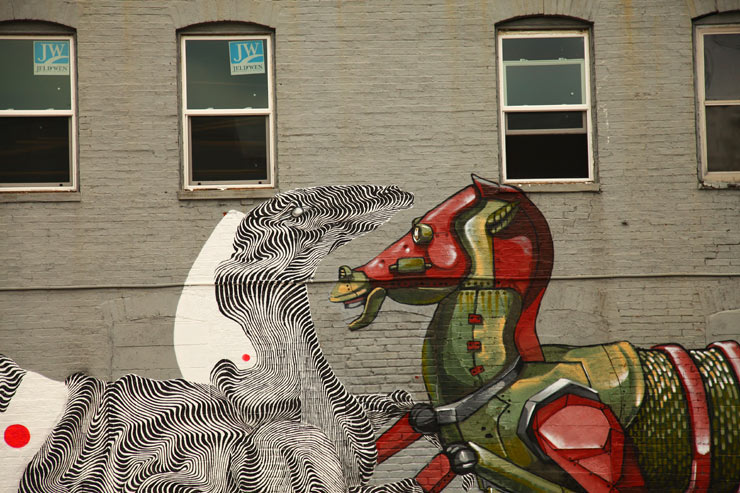 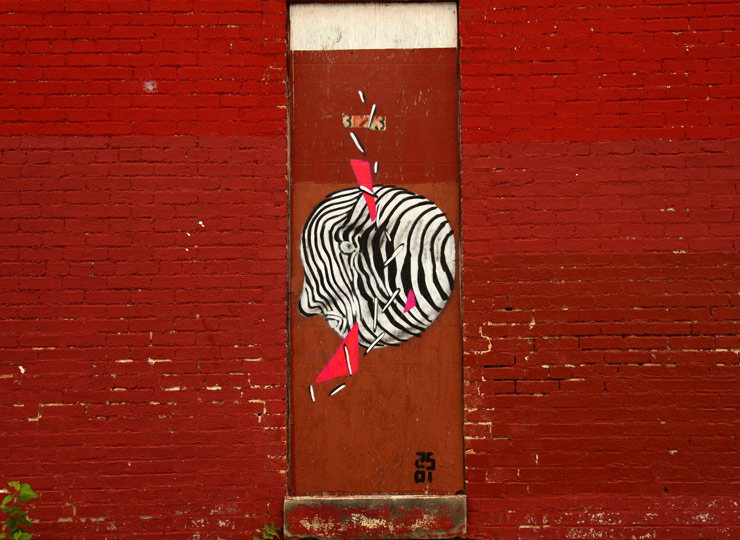 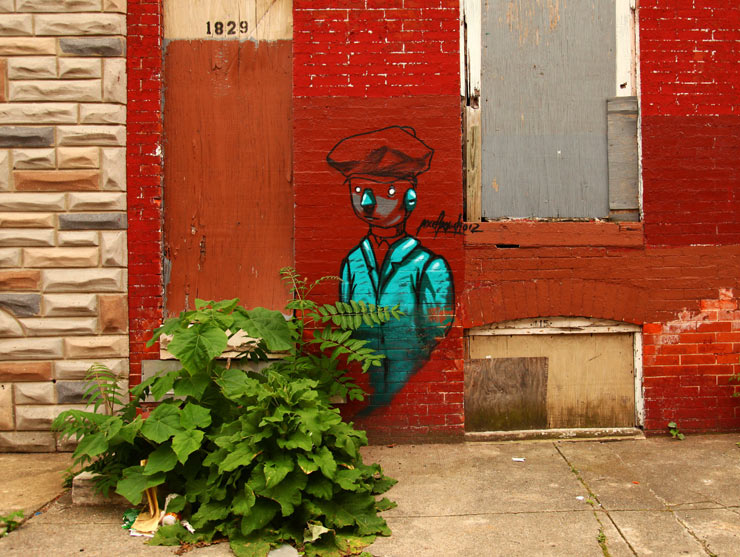 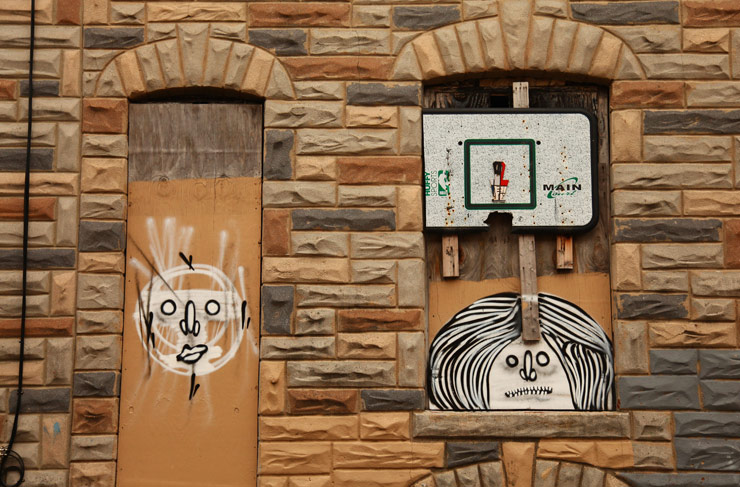 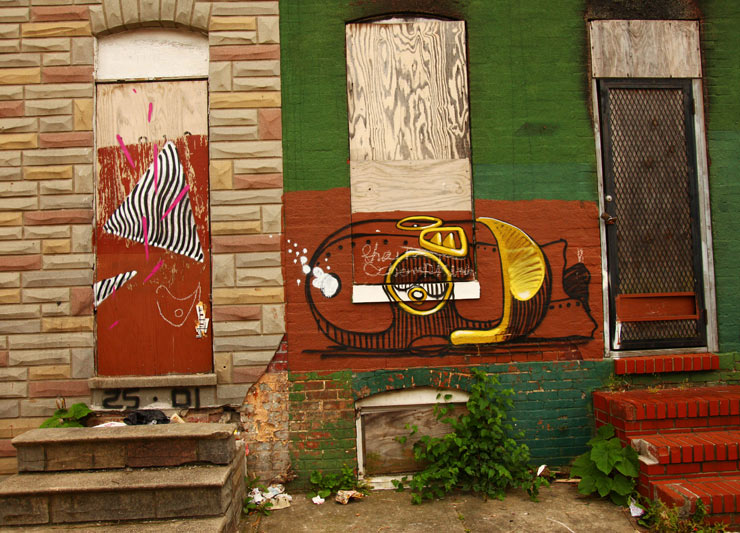 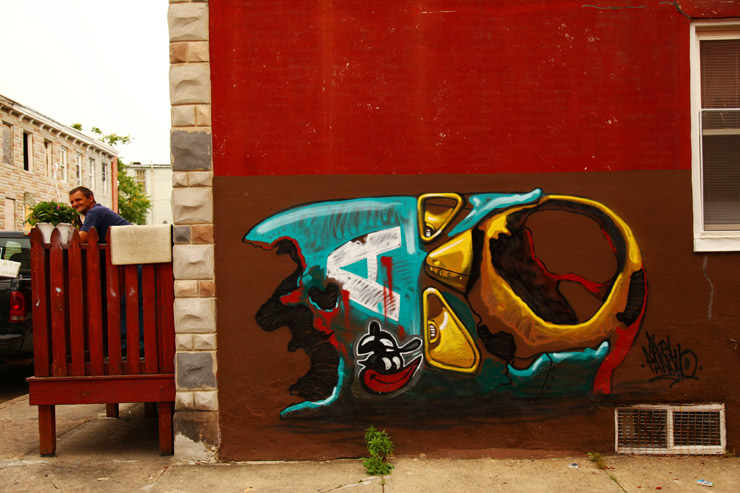 Pixel Pancho. The owner of this house asked them to include the mascot from Baltimore Oriols baseball team into the composition for her children. (photo © Jaime Rojo) 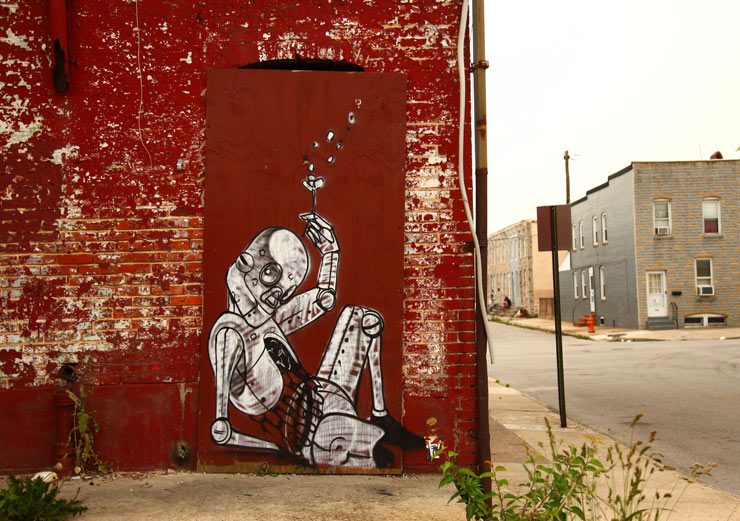 Overunder with Flying Metal Gates in Cleveland for "Zoetic Walls"
OverUnder is swinging through Cleveland with his flying pull down gates, upside downy paper birds, bolts of bending flat energy, and circling blue DNA balls of cytosine. The visual dictionary that O...
Monkey Bird: "L’ouvreur de Chemins" Celebrates a Cathedral's 800th in Spain
It’s not every day that you have an 800th anniversary. Bringing monumental aesthetics, theologic references, and the language of classical architecture to this massive wall at Calle Fernán Gonzále...
Homo Riot, Suriani, The Dusty Rebel "Pay It No Mind"
Queer artists and writers in the graffiti and Street Art scene have always been present but like everywhere else in the culture they were more or less bullied by peers to deny it or keep it hidden. I...
BSA Film Friday: 01.16.15
Our weekly focus on the moving image and art in the streets. And other oddities. Now screening : 1. Paulo Ito and a Neighborhood Mural in Brazil 2. Sesame Street X Hot Tea 3. Sten & Lex:...
Stohead Sends De-Constructed Letterforms Across a Structure : UN "One Wall" Project
Stohead (Christoph Häßler) started writing graffiti at 14 in southern Germany, where he was born, and last month he completed his largest mural in Berlin for UN, three decades after he began.   St...
2501 Baltimore Brooklyn Street Art Jaime Rojo Martha Cooper Pixel Pancho Steven P. Harrington Stikman