For the past week the Turin-born artist Corn79 has been creating a new mural in Villa Lagarina, a small town of less than 4,000 in the lush mountains of Trentino. Working on a lift only a hundred meters or so from La Pieve di Santa Maria Assunta, the architectural focal point for the town, the former graffiti writer has created a mural that emulates the physical and the spiritual elements of the historic with a distinctly modernist regard. 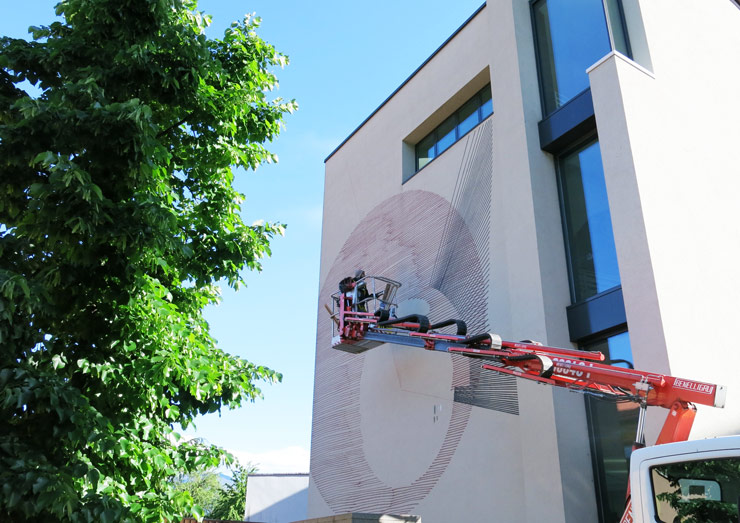 Look closely as the new piece in context and you will see the echoing of the geometry of the street and the lines of the architecture that surround it. Corn79, who also goes by his given name of Riccardo Lanfranco, often incorporates the forms of the natural world cavorting, making poetry with those of the human-made. Even without a textual element, you can see that he has an influence of calligraphic precision. 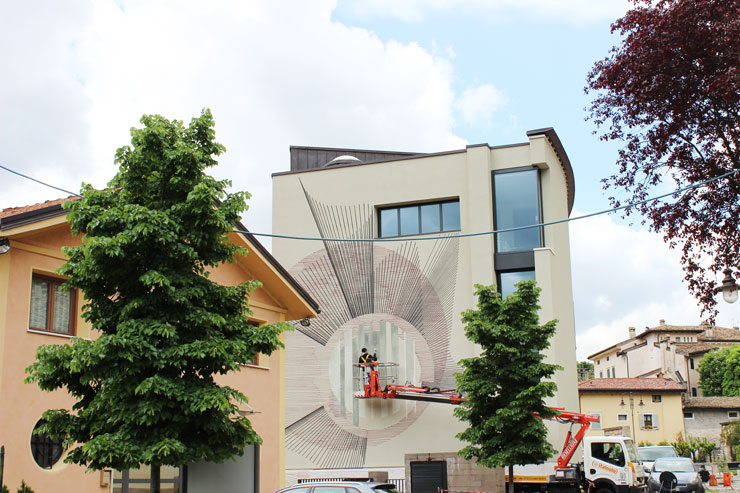 Fanning overlapping cones of rays shooting into the atmosphere at different lengths, a concentric communication between shapes, geometric forms, line-screens that envelop and cradle, pinch and expand. As tempting as it would be to draw a correlation only to the spiritual influences of a the holy building nearby, one will also be reminded of the leaping electronic graphic representations of data we see on screens today in music, medicine, manufacturing – perhaps every industry. These are organic influences now more formally ordered, reined in with parallel sun or energy rays poking through the clouds, heavenward and outward.

The mural was commissioned by the association “La Saletta – Associazione MultiVerso” and Corn79 would like to extend many thanks to them and Luca Pichenstein. We thank Corn79 for sharing these exclusive images with BSA readers.

Don Rimx in El Barrio with Revered Poet Jesús "Tato" Laviera
The revered Nuyorican poet Jesús "Tato" Laviera will be honored this weekend with a new mural by artist Don Rimx in Spanish Harlem/El Barrio in addition to the re-naming of 123rd Street after him. Wea...
Nuart Aberdeen 2017: Full Roster of Artists Confirmed
And then there were 11. With yesterday's official announcement that Norwegian artist Martin Whatson and Belgian artist Jaune will be participating this April at NUART / Aberdeen the full line up of...
INTI Paints a Survivor in Chile: “El Tamarugo”
We have a departure for Chilean muralist INTI today – no figurative mystic signaling secret truths to you from under a hood. This is “El Tamarugo”, a colorful depiction of the native tree of Chile th...
Jake Genen: Urban Zoology
New York is a Zoo. How many times have you heard that? The animal kingdom has nothing on our subways, which can present a parade of species at all hours, from the scaley to the furry to the creat...
Labrona and DB on the Road, Dispatch From Portugal
“I didn’t get invited to paint anywhere this winter so I made my own street art trip,” says Labrona of his new wheat-pastes in Portugal. “It’s sort of a throw back to before mural festivals, when we j...
Brooklyn Street Art Corn79 Italy Jaime Rojo Steven P. Harrington Villa Lagarina