It’s not often that a major city gives a spotlight to a graffiti / Street Artist and issues a formal proclamation about it, but that is exactly what happened Saturday in Los Angeles. AskewOne, a native of one of LA’s sister cities, Auckland, New Zealand , was honored by the City as his new mural “Under the Influence” was unveiled as part of the LA Freewalls Project.

“It’s much more likely in this city that a graffiti artist will be arrested than be recognized for positive contributions to the community”, as LA Taco reports, but really when you consider the major inroads that the LA Freewalls Project has made into the dialogue around the value of Street Art in LA’s local politics, it can’t be entirely surprising. It probably helps that the image itself incorporates the American flag into the composition– sort of disarms that whole negative rant that some politicos use when lumping Street Artists together with other social scourges like drug addiction, domestic terrorism, and the Ice Capades, doesn’t it? 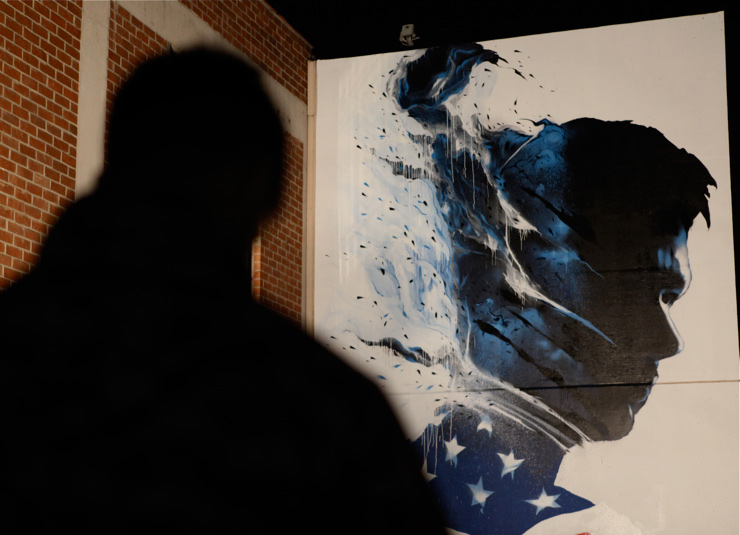 “AskewOne is one of the world’s preeminent public artists, and one of the most accomplished contemporary graffiti writers,” says Daniel LaHoda, who spearheads LA Freewalls and who also hosted the inauguration of the new LALA gallery Saturday night with many of today’s best known Street Artist’s work on the walls. According to an official press release, the now famous LA mural moratorium will soon be lifted and “Kamilla Blanche, Senior Deputy for Arts and Culture, and the Director for Sister Cities, is excited about the possibilities to expand Los Angeles’ place as the national epicenter of public art.”

BSA is very pleased to be able to share with you these images of the new piece as shot by photographer Todd Mazer. 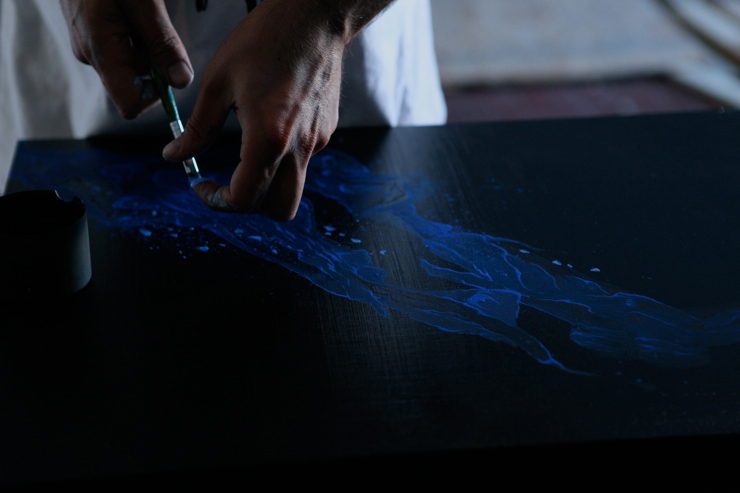 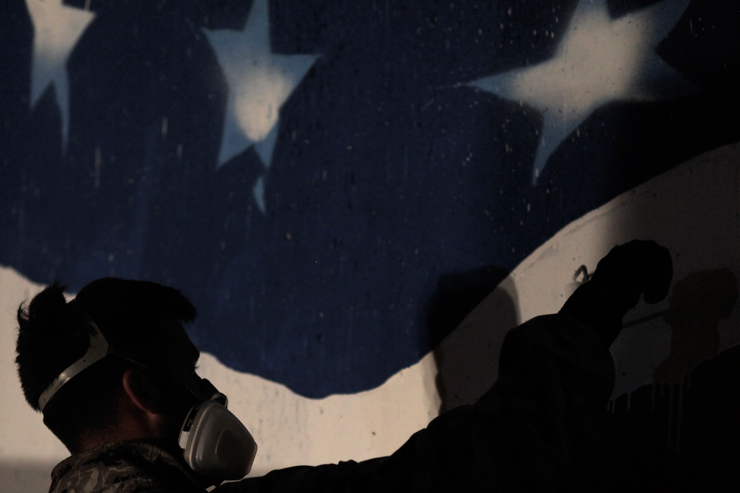 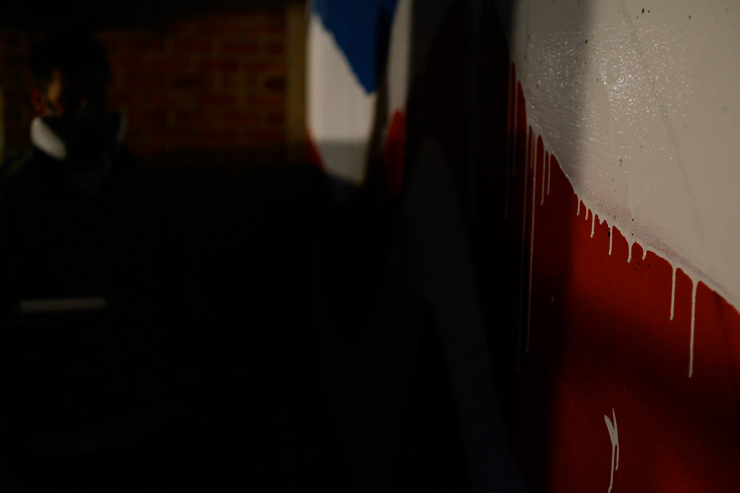 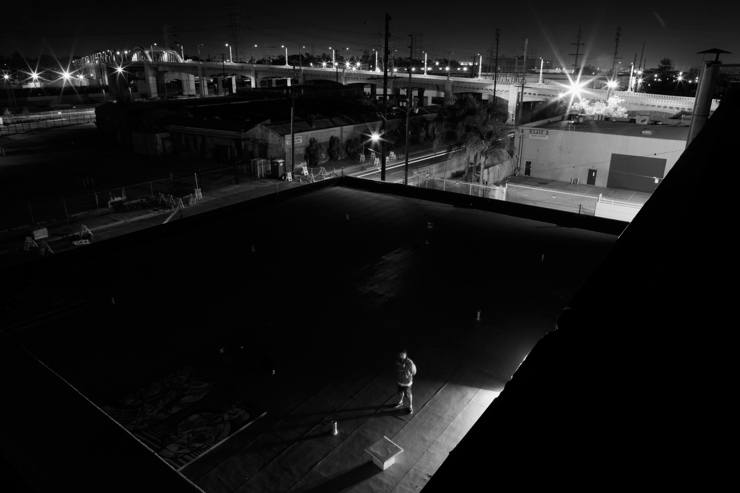 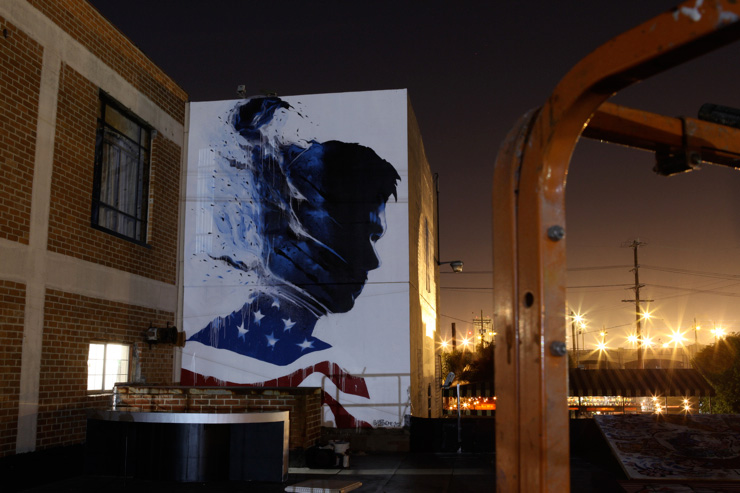 Michelle Houston, BSA Wishes And Hopes For 2019
Michele Houston, enfant terrible, storyteller in the Queen's English, curator at Monumenta festival Leipzig, at Zwitxhermaschine Gallery in Berlin, for this years very successful Wandelism, and co-fou...
BSA Images Of The Week 06.07.20 / Dispatch From Isolation # 77
Welcome to BSA Images of the Week. The revolution has begun. When a socio-political-economic nexus is forged with such historically contentious factors, it only takes a spark. If you are w...
Kazzius “In Search of the Movement” : High Speed Geometry in Spain
Graffuturism in Barcelona today as KAZZIUS speaks geometry and abstraction on a wall for Contorno Urbano. Rapid fire planes of aqua, marine, and yellow all shoot along an invisible line, pile, c...
BSA Images Of The Week: 07.09.2017
Culture Vultures, yo. Those folks and corporations and brands who don't originate, but they sure know how to take. They've been around for millenia, but are always a surprise anyway. This week t...
Human Sticker, Human Behavior in Berlin with Rallitox
You may be familiar with artist such as Maurizio Catelan and Marina Abramović  who have featured live humans suspended from the wall as part of gallery or museum installations, and street artist Mark ...
Askew One Auckland Brooklyn Street Art CA Daniel Lahoda Jaime Rojo LA Freewalls Project Los Angeles New Zeland Steven P. Harrington Todd Mazer