That was a short week, right? Let’s resolve to have short weeks for the rest of the year! Welcome back to Fun Friday, which took a little vacation. Here are our stories this week; 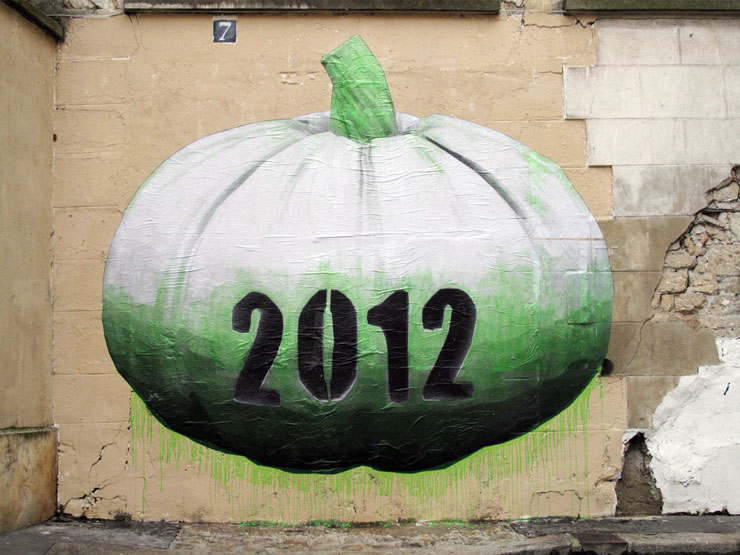 LUDO thinks of the new year as a big green pumpkin, an allusion to harvesting something that has grown gargantuan on the ground. (photo © Ludo) 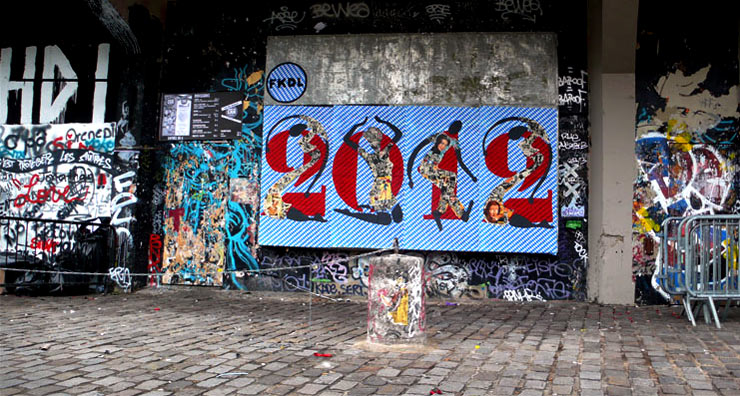 FKDL prefers to look at 2012 as a dancing, strutting, posing proposition; an interpretive welcome to the new year. (photo © Courtesy of FKDL)

“Rather Unique” Saturday at Woodward Gallery

Taking advantage of the fact that a lot of New York street art goes into hibernation this time of year, artist/curator Royce Bannon ia collecting a “Rather Unique” group of Street Artists for this new show at Woodward, opening January 7.  A group show opening the 7th at the Woodward Gallery in Manhattan. 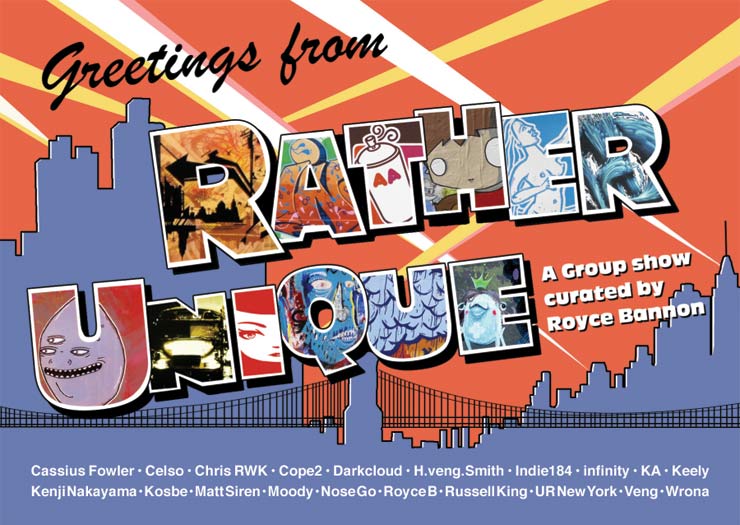 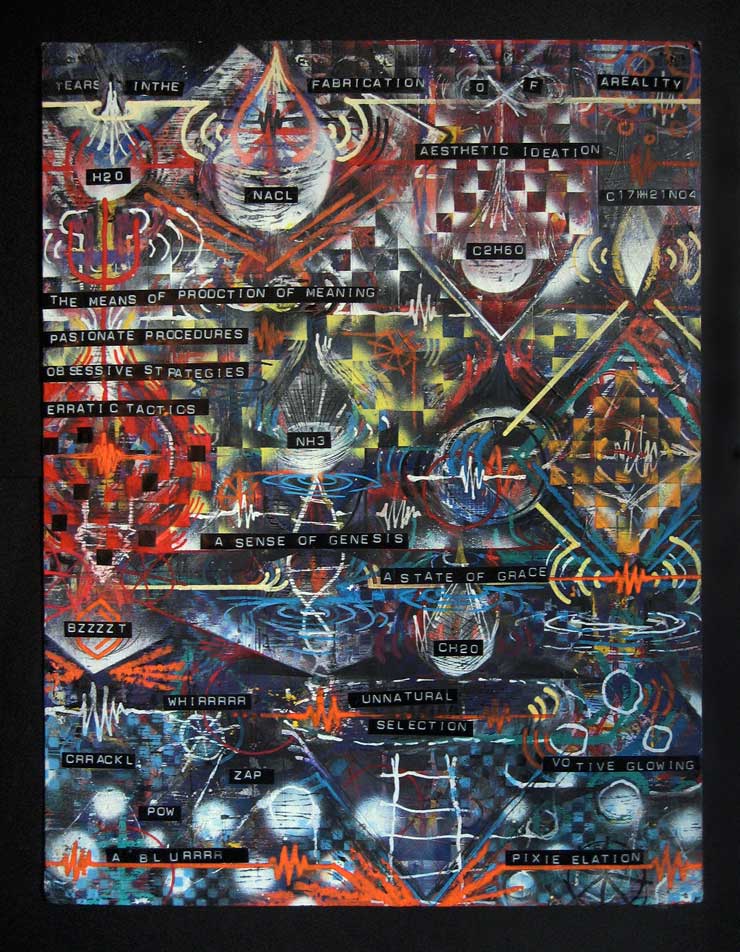 Along with the new piece, “Personality”, pictured above by Street Artist Infinity, the roster includes many of the names on the scene today bringing it inside from the cold, including Cassius Fowler , Celso , ChrisRWK , Cope2 , Darkcloud , H. Veng Smith , Indiw 184 , KA , Keely, Kenji Nakayama , Kosbe , Manhattan , Matt Siren , Moody , Nose Go, Royce B , Russell King , UR New York, and Wrona

Walls, freights, canvasses – all are attractive sights for Labrona, and now he’s hawking some new prints he made, like the one below, which he’s selling here. 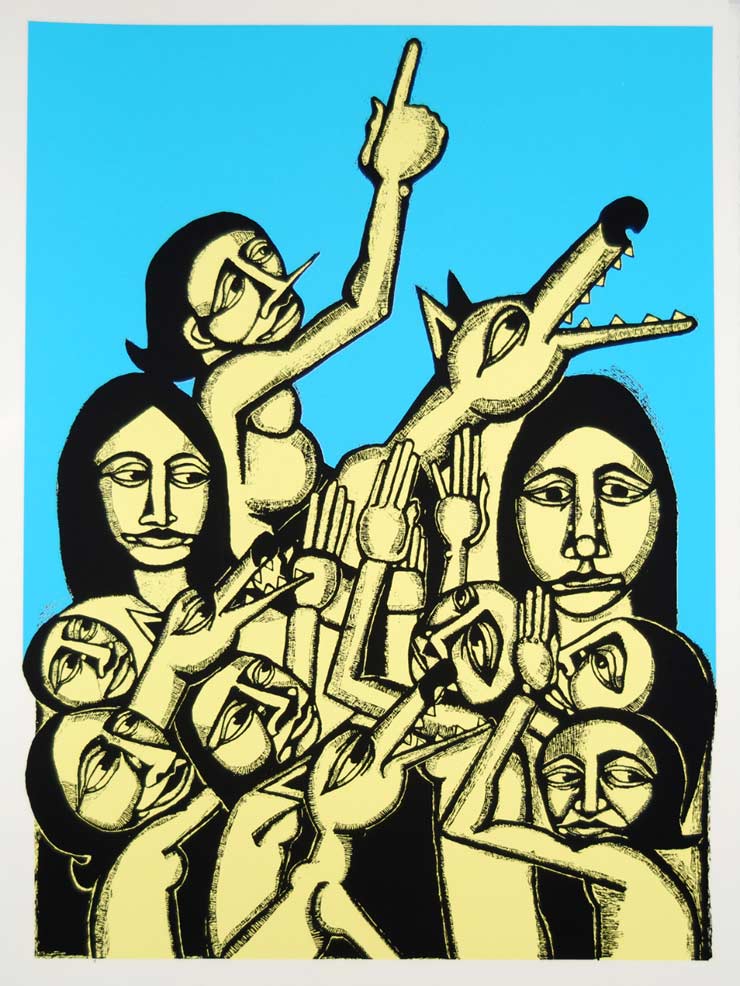 Droid and Avoid “Live the Dream, Learn to Die II”

Speaking of trains, Avoid and Droid have collected tales of their freight-hopping journey up the West Coast in the summer of 2011, and include fun stories told in rusted rail haiku like ones about the pot-growing subculture they discovered in California. Also they give helpful hints about how to pick your spot in the weeds to catch some shut-eye, how you should not defecate in the pathways, and that urine flows downhill. Welcome to the Jungle! Call it a punk-rock travel guide. 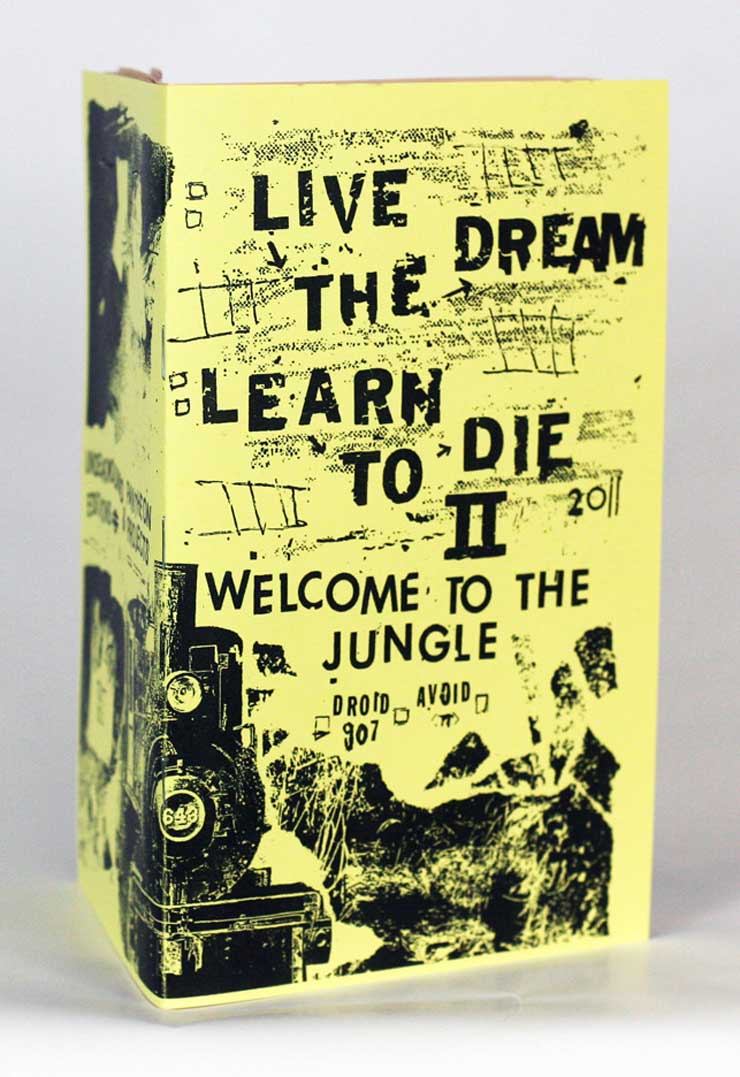 You can check out their publishing enterprise of zines here

VHILs Video of his Skulls at Nuart 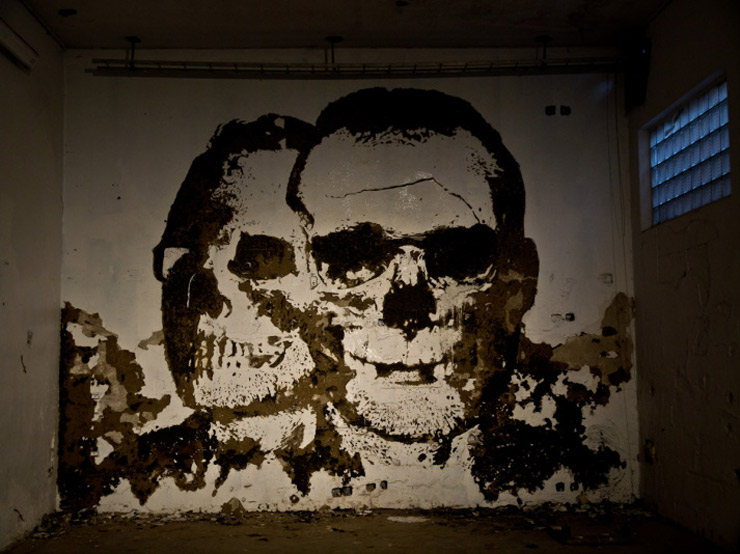 finDAC Shines as Poseidia Rises In Berlin
Atlantis didn’t arise, as the prophetic clairvoyant Edgar Cayce said it would, but Poseidia certainly did only six months ago here on a Berlin street thanks to Irish Street Artist and fine artist fin...
A Monochromatic "Hall of Fame" In Slovenia for Ljubljana Fest 2021
The Ljubljana Street Art Festival 2021 took place as a cultural festival this year in the capital of Slovenia with painting, lectures, panels, special events, and guests like street artists Escif, pu...
3 Library Rats from XAV for Contorno Urbano 12 + 1
"I was a library rat. Libraries are the mainstays of democracy. The first thing dictators do when taking over a country is close all the libraries, because libraries are full of ideas and differences ...
LUDO in Brooklyn, Pretty Malevolence Growing on the Wall
Giant green flowers with closed circuit televisions instead of pistols, drone planes with insect legs, cacti that turn into syringes, a cabbage that features a hardened metal dome and 5 gun turrets - ...
BSA Images Of The Week: 03.04.18
We made it! But it was a rough few days just finished with storms and rain and snow and high winds and flooding and downed trees around New York and its environs. Similarly, as one surveys the c...
Art Basel 2011 Avoid Brooklyn Street Art Cassius Fowler Celso Chris RWK Cope2 Darkclouod Droid En Masse FKDL Fred Caron H. Veng Smith Infinity Jaime Rojo KA Keely Kenji Nakayama Kosbe Ludo Manhattan Matt Siren Miami Moody Nose Go NUART 2011 NYC Paris Royce Bannon Russell King Steven P. Harrington URNew York VENG Vhils Woodward Gallery Wrona