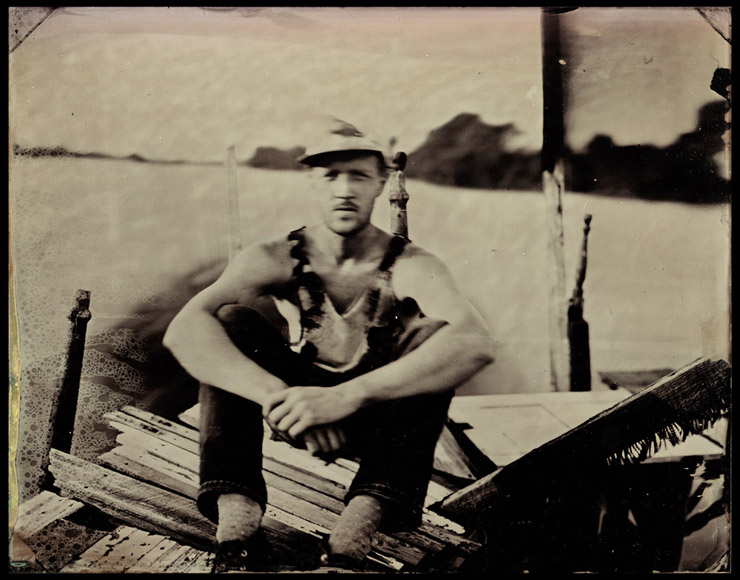 Robyn Hasty AKA Imminent Disaster “The Wind Kicks Up on the Flag-Ship” 2011. Wet plate collodion tintype. 8″ x 10″ (Image © courtesy of the gallery)

KESTING/RAY is pleased to present On the River: Stories from the heart of glorious abandon, where you cannot see what lies beyond the next bend, the first New York solo exhibition for Brooklyn-based artist Imminent Disaster. Known primarily for her large-scale street art works, the artist unveils a new body of work based on recent river journeys through the heartland of hard times. The installation functions as a cabinet of curiosities, featuring cut-paper, salvaged wood and screenprinted works alongside new, painstakingly-produced wet-plate photgraphs. The exhibition opens on January 12th and runs through February 5th. A reception will be held on Thursday, January 12th, 7–9pm at KESTING/RAY (formerly CHRISTINA RAY), located at 30 Grand Street, New York.

On the River… is an intimate portrait of contemporary life during the great recession, as seen through a lens of antiquity, that propels the viewer into a future in which the politics of Occupy Wall Street are but a distant memory.  On the River… is also a story about the river as muse, as inspiration for abandoning careful planning to spontaneous action. As the artist explains, “by allowing the river’s current to take me along without knowing where it might lead, I covered 15,000 miles of travel across the United States in 2011, taking portraits with a wet plate collodion camera and building a fleet of floating sculptures with the Miss Rockaway Armada in Philadelphia. On the River… attempts to span the distance between maker and object, object and audience – the way the river connects two shores.”

Imminent Disaster, whose given name is Robyn Hasty, has come to prominence through her work as a street artist. Her large-scale cut paper portraits can be found on cities throughout the world and she has collaborated with public-space artists including most notably Swoon, the Swimming Cities artists, Gaia, Chris Stain and Maya Hayuk. Within the past two years, Hasty has developed this body of photography that will be exhibited for the first time – along with cut-paper and print-based works, marking an important moment in her artistic development.

Hasty’s approach to craftsmanship in photography remains as meticulous as in her drawings and prints. The wet-plate colloidon process, first introduced in the 1850s, was “a very inconvenient form which required the photographic material to be coated, sensitized, exposed and developed within the span of about fifteen minutes, necessitating a portable darkroom for use in the field.” With the eye of a traveler seeking to understand the intertwined nuances of place and personality, Hasty captures incredible detail in her work. Although a young artist herself, Hasty’s imagery is suffused with compassion for living through and overcoming crisis, pointing to a maturity beyond her years. The artist’s own drive to connect with this often fragile emotional atmosphere is underscored by her process, which necessitated the construction and carriage of her darkroom throughout her travels.

Hasty states in a recent interview with NPR, “If you actually sit out there…you realize that – functioning or not –the economic world is affecting everybody. And I guess [it is] the will of the individual, even in certain circumstances that are very extreme, to still have this energetic, active, creative energy.”

Robyn Hasty, a.k.a. Imminent Disaster, (b. 1985, West Palm Beach, FL) is driven by the urge to achieve fluidity between aesthetic practice and life. Her approach spans sculpture, printmaking, photography and writing; she also works as a street artist under the name Imminent Disaster. Hasty’s often site-specific work adapts to changing environments inspired by remote travel and adventure. She has rafted the Mississippi River with the Miss Rockaway Armada; crossed the Adriatic Sea on a junk boat to attend the 2009 Venice Biennale; designed and built the sets for Jeff Stark’s renowned “Sweet Cheat” performance sited in an abandoned warehouse; and designed two murals with the Philadelphia Mural Arts program. Her work has been exhibited throughout the US and internationally at the Van Abbemuseum (Netherlands), Addict Galerie (Paris) and Urban Angel Gallery (London). In 2011 she built floating sculptures on the Schuylkill River as part of a grant awarded by the Philadelphia Exhibitions Initiative, designed and built a house in Ghana, and was featured on NPR for her project “Homeland” which led her across 15,000 miles of the United States taking wet-plate collodion portraits. Her work has also appeared in The New York Times, New York Magazine, Juxtapoz, The Wall Street Journal and The Village Voice.

KESTING / RAY is an innovative gallery and creative catalyst in New York whose mission is to discover and advance the most important contemporary artists transforming concepts of space and identity. For more information, visit www.kestingray.com.

Street Art Behind Glass: Artist Ryan Seslow
Street Art behind Glass in Park Slope: Artist Ryan Seslow, Brooklyn Street Art. The neighborhood of Park Slope in Brooklyn is more known for beautiful Brownstones, impossible parking, towering maples,...
"Équilibres Précaires" (Precarious Balances) in Paris with Clément Laurentin
Speaking in his abstractly modern visual language, artist Clément Laurentin creates this curvilinear winter ode to our permanent state of precariousness. In cooperation with Art Azoï, an important st...
Johannes Mundinger Goes to the German Countryside to do "Feldforschung"
It is not rare anymore, but certainly it is still unusual for street artists to take their talents in search of a barn in the countryside. Berlin’s Johannes Mundinger departed the big city this summer...
Paris Street Art : Spencer Elzey in Europe
As we continue our one week residency on BSA for Street Art fan Spencey Elzey, he takes you to Paris to see what is happening on the street there right now. If you were to try to characterize the na...
Evolution of a Revolution: MEMUR Part I in Oldenburg; Street Art
From environmental nightmares to the corporate war machine to social solidarity to identity politics to abortion to the isolation brought on by Covid, the muralists at the MEMUR Festival in Oldenburg...
Brooklyn Street Art Imminent Disaster Kesting/Ray Gallery Manhattan NYC Robyn Hasty