“That’s Great, It Starts With An Earthquake”

Well folks it’s the End of the World, as we know it. How’re you feeling? Actually, according to a certain sect of clairvoyant Christians today is Judgement Day, and the end of the world is not until October, so you should still forget about that Christmas Layaway Plan you have at Walmart.

New York subways and buses have been pummeled for weeks with pulp novel style posters impugning the good name of the Devil and overweight puff pastry people from the Midwest have been milling around Times Square in sensible shoes telling us that repenting from our sins is pretty much going to be the only way out of the Late Great Planet Earth. As usual, these wild eyed tourists never make it out to Brooklyn, so our borough is going now to Hell – which will be big news to the Hasidic population. 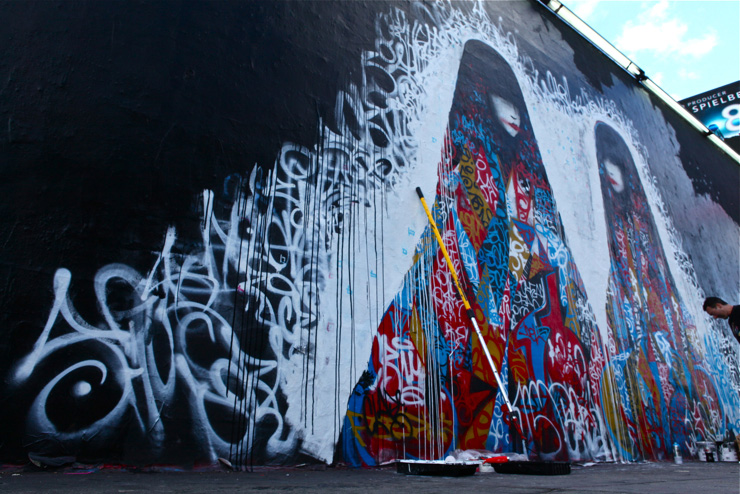 For those of you unwashed who are still here after the 6 o’clock earthquakes roll through each time zone across God damned America we bring you the gloriously sanctified beauty of “Twin”, the new HUSH show at that den of iniquity called New Image Gallery in God forsaken West Hollywood. 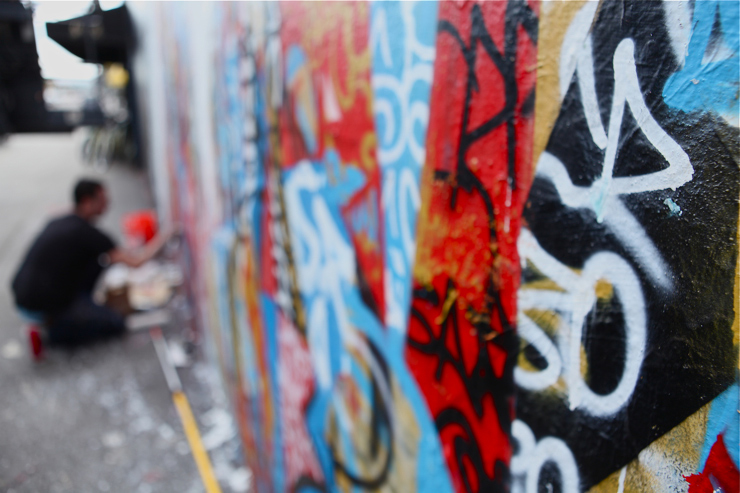 “Tagging, Graf, Street Art and art; each is always a choice, an action,” HUSH told us a couple of years ago when discussing his work, and his open approach to borrowing from comic books, graffiti, and traditional Japanese iconography is what makes his work modern.

Internalizing and interpreting the energy from Krazy LA has been a dream for a free  expressionist like HUSH, who likes to throw everything at the wall – tagging, painting, collage, – deconstructing and reconstructing until it achieves balance.  “I’m big on progression and I’m always looking at how to take my work forward, pushing it while still retaining pointers back to previous works,” says the artist. With a number of shows and countries and street pieces under his belt, the British native is also quietly achieving a mastery of his technique, as urban turns urbane in the finely sprayed misty glow surrounding these peaceful idyllic visages, rising from the blue cacophony. 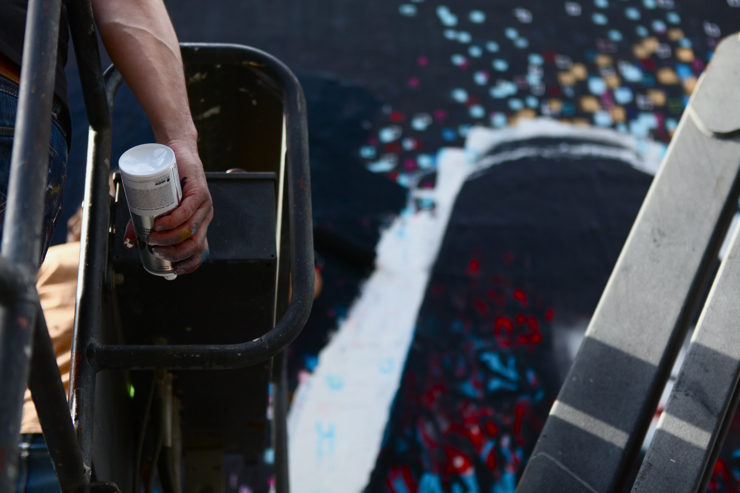 Marsea Goldberg, a wild and fine former Brooklyn gal, has been looking out for and championing the new talent on the graffiti/Street Art/fine art scene at New Image since the mid nineties, including artists like Bäst, Cleon Peterson, Clare Rojas, Date Farmers, Ed Templeton, Jo Jackson, Neck Face, Os Gemeos, and Retna, so she knows what she is looking for and knows how to create a charged environment for artists to stretch in.

“Hush is a fantastic artist and he has a down to earth, hard working vibrant spirit,” Marsea explains, “I’ve liked his work for a long time – The first time I saw his work was at the “Cans Festival” which Banksy put on in London 4 years ago. When I saw his colorful, ornate murals in the long tunnel I was beyond impressed. The interesting thing about Hush’s art is the combination of influences.” 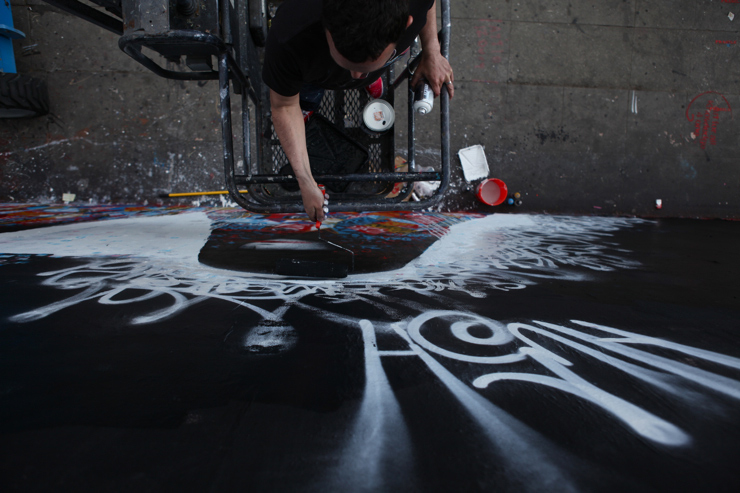 For his part, HUSH is taking the opportunity seriously, “It’s great to be at New Image because of its history… I’ve always admired the rawness and energy of the place and Marsea’s commitment to whatever this art movement is.”

As his work mutates and configures across mediums, one might wonder how much of this has meaning to him and whether it is an involuntary stream of favorite symbols and techniques combined and recombined. “I feel like my works have matured and I’m creating my own visual language, even though it’s probably only me who understands it,” he says smiling. 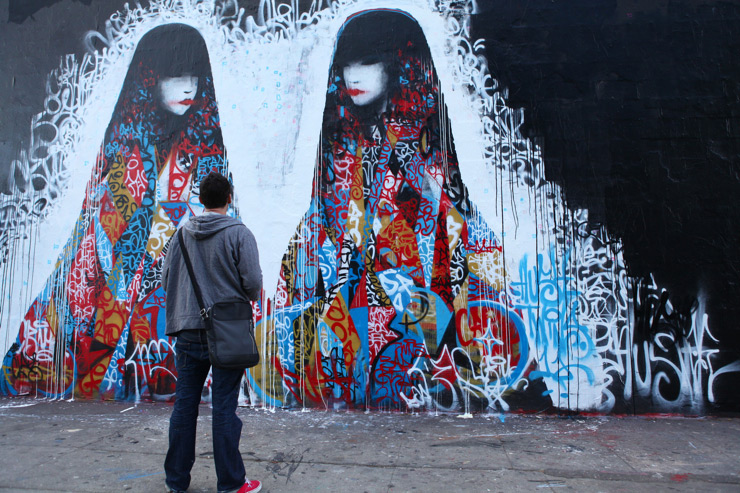 “It’s funny – I’ve had this work in my head for the last few years but it’s just fitting into the story now. I think I’ve got until the year 2014 in paintings now but I’ll have to take you through it in real time… I’m looking forward to showing how it all pans out in the future though.” We would love to stick around here on Earth to see how his work turns out in ’14, but there is someone knocking on the door… 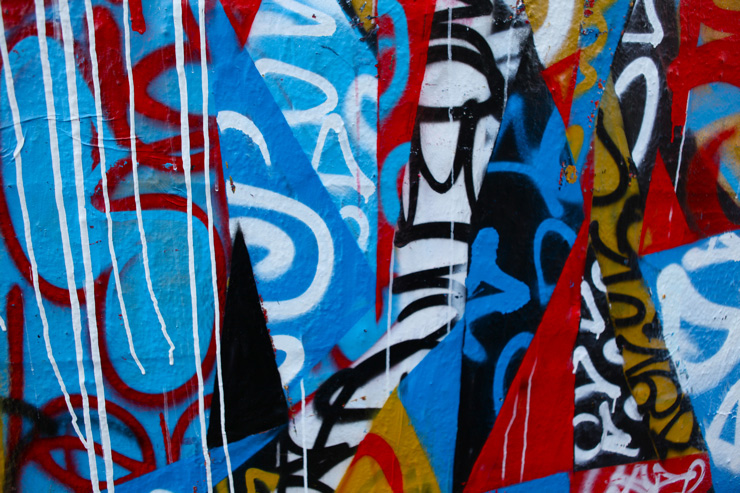 Photographer Todd Mazer captured the artist working outside this week on the “Barracuda” wall where Saber and Shepard Fairey did their near iconic flag interpretations. And through Todd’s lense we get to see Hush tagging the gallery walls and the installation underway. 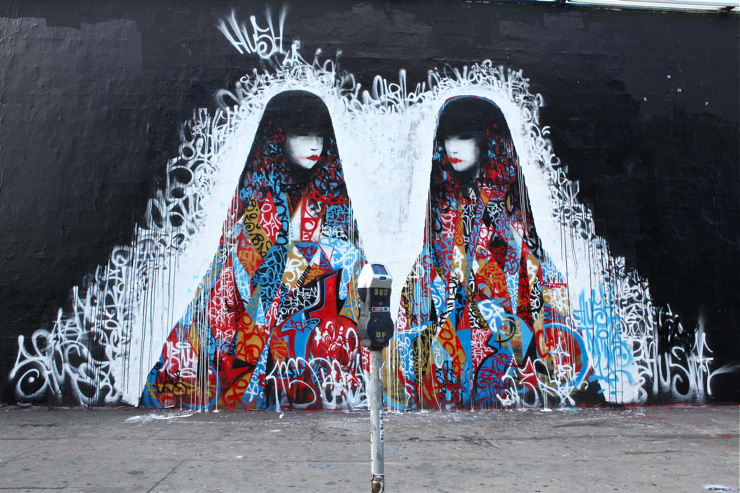 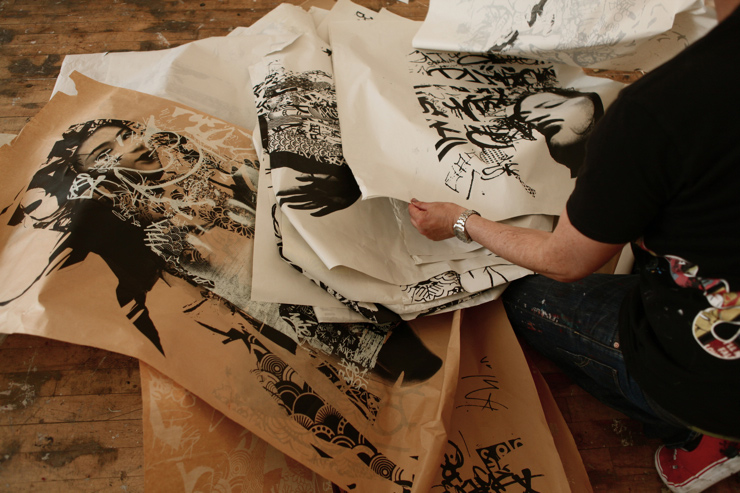 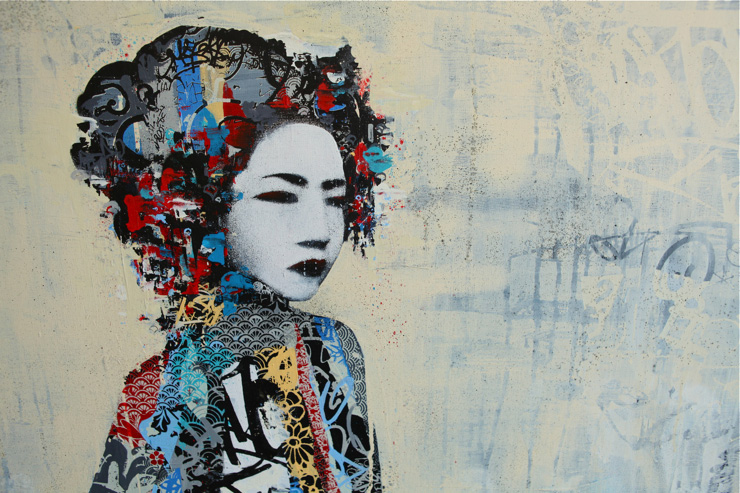 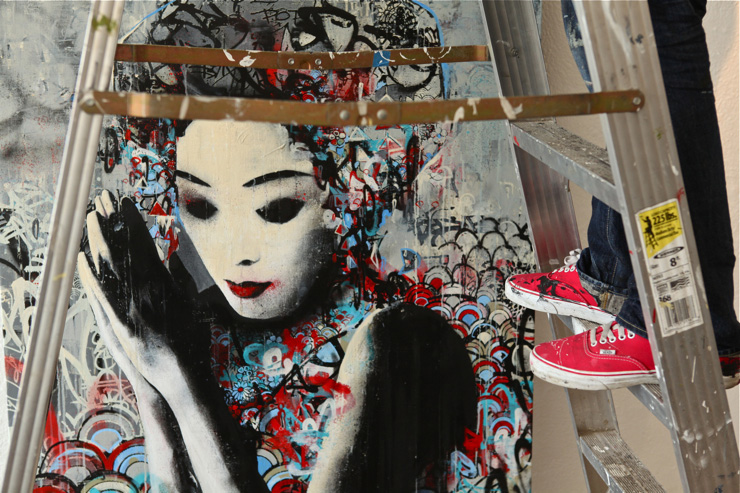 The plumbs have just blossomed, but not yet the Sakura. Almost Blue Geishas at the height of springtime’s charm. HUSH, “Twin” at New Image Gallery (photo © Todd Mazer) 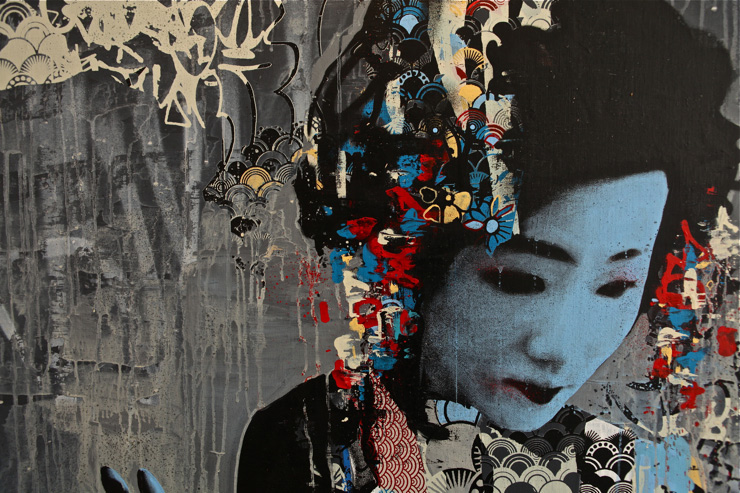 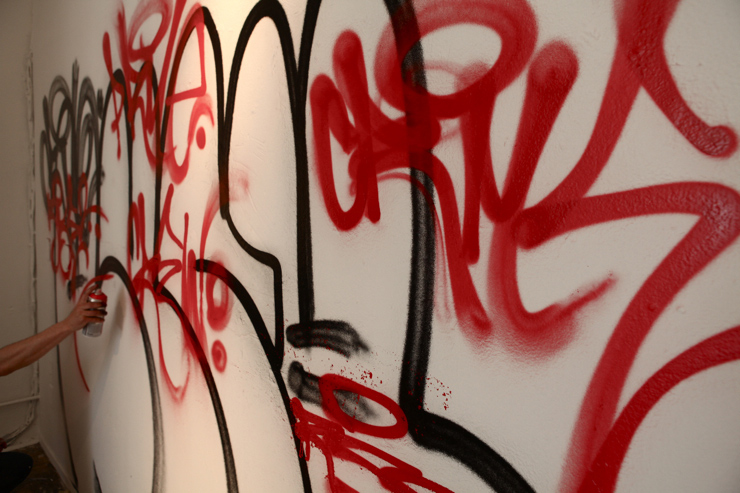 This is where it all began for HUSH, who is shown tagging the walls of New Image before “Twins” (photo © Todd Mazer) 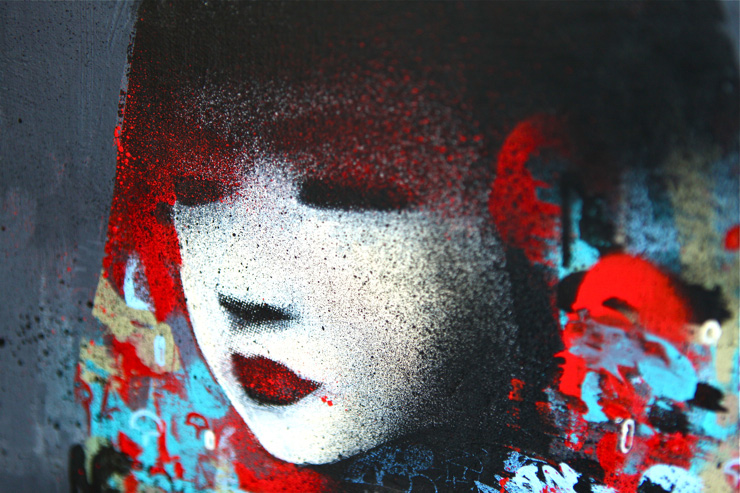 STRØK Stencils Ernest Zacharevic Playing in a Brooklyn Doorway
Strøk is in Brooklyn briefly and he had time to spray out a brand new 8 layer stencil on a doorway here before traveling a bit to see more of the Eastern Seaboard with his girlfriend. We found him thi...
BSA Film Friday: 05.24.19
Our weekly focus on the moving image and art in the streets. And other oddities. Now screening : 1. "Nuart Aberdeen 3" by Fifth Wall TV2. "The Green and Pleasant Land" by Max Colson 3. Jorge ...
DuorOne and Elodie: This Is Us
About midway through this video, the artist is lifted into the air above the street, away from walls, suspended – and the audio is that of a heart thumping quietly, uncrowded, unfogged, unadorned. ...
Dont Fret Hits Streets With Inner Dialogue and Rotten Bananas
If you are wondering why you are seeing a lot more lumpen and average people than usual on the streets of NYC recently it may be attributable to the wheat-pasted everymen and everywomen from the Chic...
BSA Film Friday: 09.07.18
Now screening : 1. INDECLINE Billboard "Clown" Takeover 2. FACTORY OF KAOZ 3. Vegan Flava: A million years lost in a moment. Trollhättan, Sweden 4. "ARTinfect IV - The PFAFF Project" in Kaiserslau...
Banksy Barracuda Bast Brooklyn Brooklyn Street Art CA Cans Festival Christmas Clare Rojas Cleon Peterson Date Farmers Ed Templeton End of the World As We Know It Geisha Hasidic Hush Jaime Rojo Jo Jackson Judgement Day Late Great Planet Earth Layaway Plan Los Angeles Neck Face New Image Gallery Os Gemeos Osgemeos REM Retna Saber Shepard Fairey Steven P. Harrington The Devil Times Square Todd Mazer Walmart West Holliwood West Hollywood