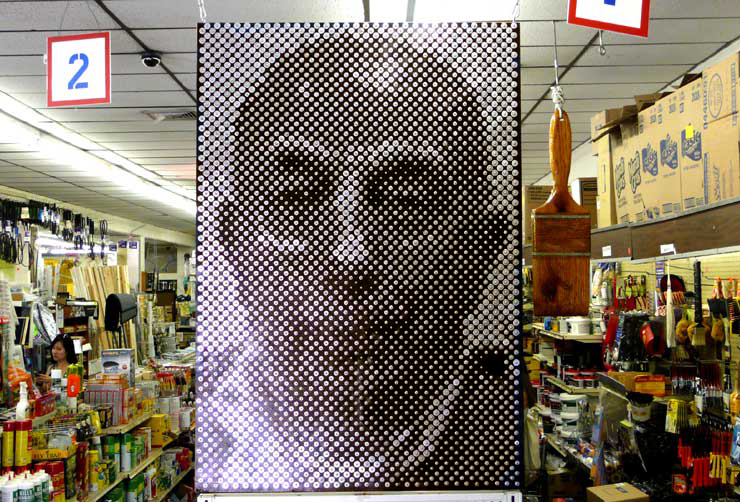 You won’t find a more excited community-minded, artist-loving dude than Joe Franquinha, who is the second generation owner of a hardware store in Williamsburg/Bushwick, Brooklyn. Crest Hardware, founded in 1962 on this same block by Joe’s dad and uncle, is the hardware store for the multitude of artists who have moved into the neighborhood over the past decade or so. 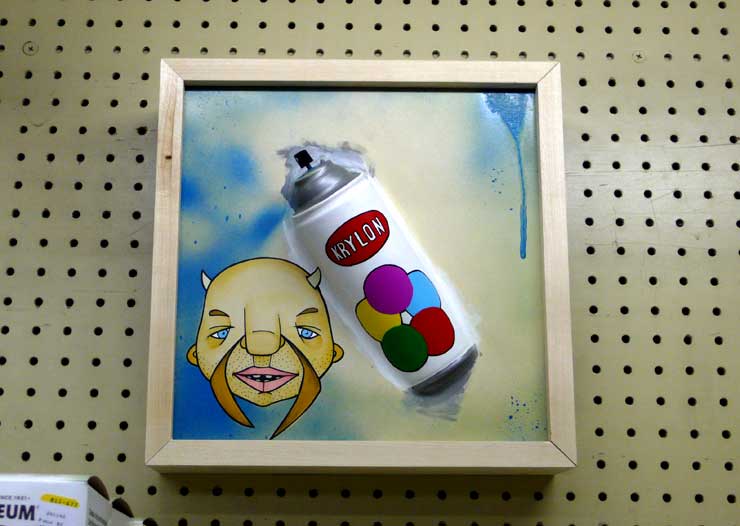 Nine years ago they had the first Crest art show in the store itself using hardware materials to make and inspire the art. The eclectic and frequently humorous show drew attention to the bursting artist community and grew larger each year.  In 2008 ago Joe expanded the show to include musicians and DJs from the neighborhood and started calling it “Crest Fest.” 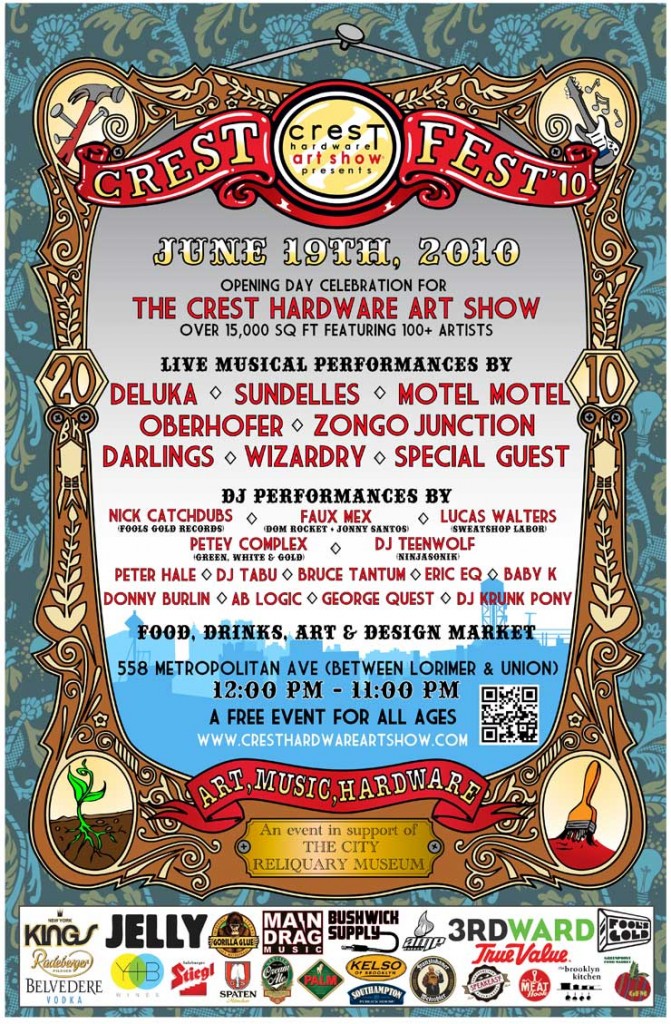 This year the festival has 140 artists, 15 DJ’s and 8 bands. Joe says, “There is an abundance of musical talent in this area as well as art and I wanted to take the opportunity to showcase them too. It’s been getting progressively bigger, and it’s always free to attend. That’s the main thing. We want people to be able to enjoy it, come on in, have fun and take a day off and absorb culture in so many of it’s facets.” 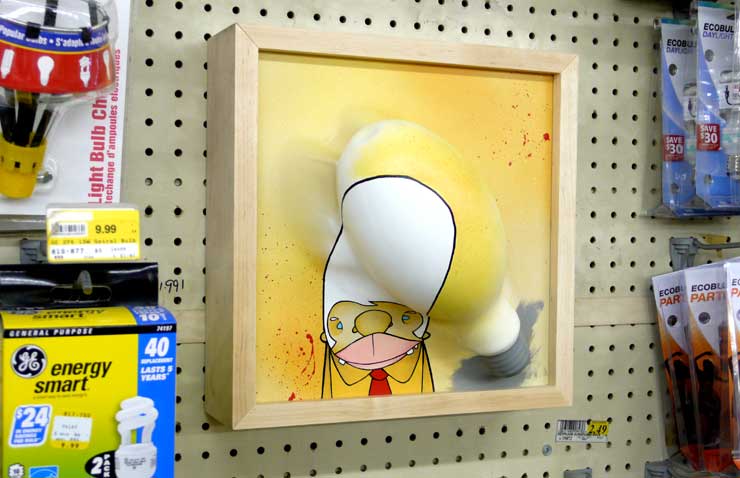 Joe took a few minutes from installing art to talk about the show that left the white box for the tool box:

BSA: I see a lot of hardware of course, but do you also sell art supplies?
Joe Franquinha: Spray paint is definitely an option I’ve been weighing recently. I think probably in the next year or so our spray paint section will probably expand, including companies like Montana, maybe something like IronClad 1. But Montana seems to be what is on most people’s radar. Then it’s a matter of them figuring out which one they want, the Spanish one or the German one. 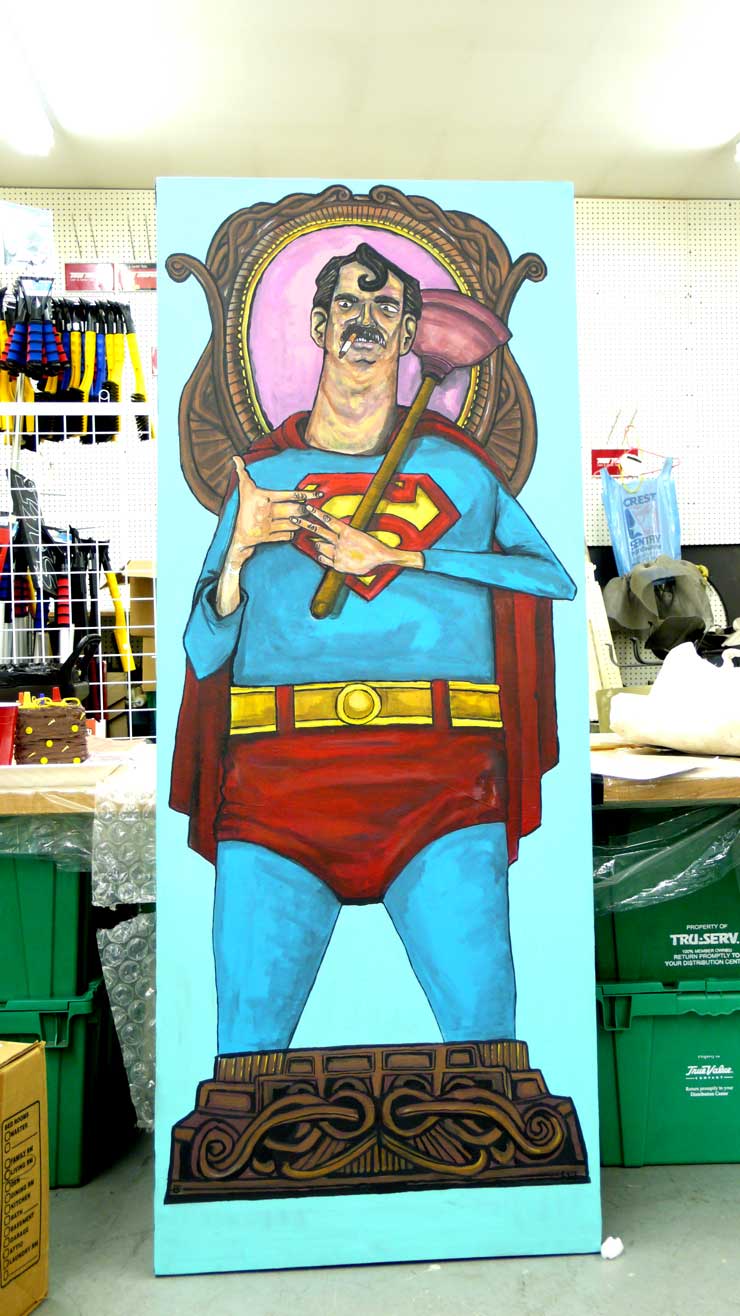 BSA: Do you have any people who do street art in this show?
Joe Franquinha: Yeah there are a couple of people – there is Peat Wolleager from St. Louis, he goes by Stensoul.  General Howe has a piece in the show and I’m excited for people to see the piece he made just for Crest Hardware. He’s doing some really cool work so I’m proud to have him on board. We still have a couple of days for people to be doing installing up to Saturday. (editors note: while the complete artist list was not available at press time, there are a number of street artists in the show including Royce Bannon, Celso, among others) 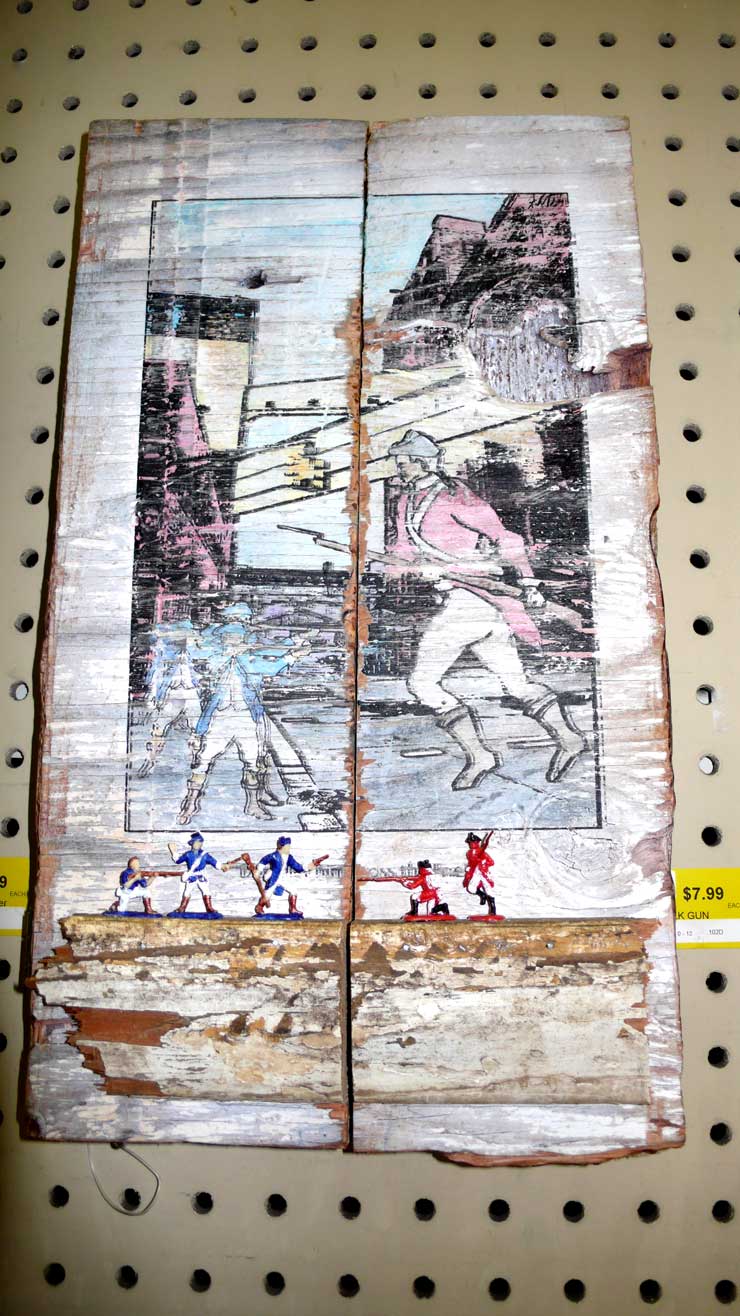 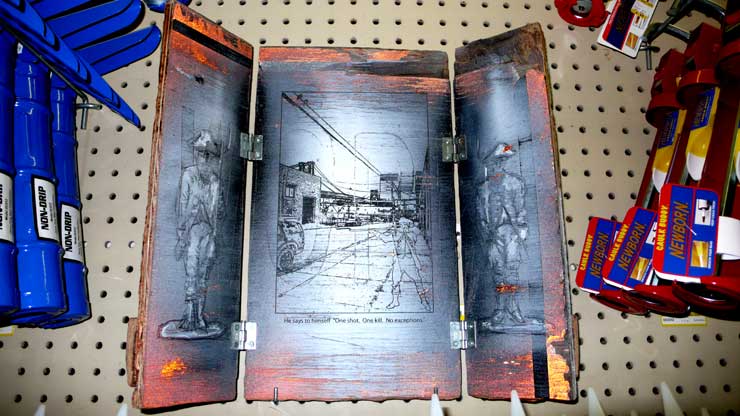 BSA: Why do think it is important to show the work of local artists?
Joe Franquinha:One hand really has to wash the other as far as supporting your local artist goes. Artists shop at my store to get their materials and if I have the ability to help promote their art and their passion side by side with mine, I’m gonna do it. 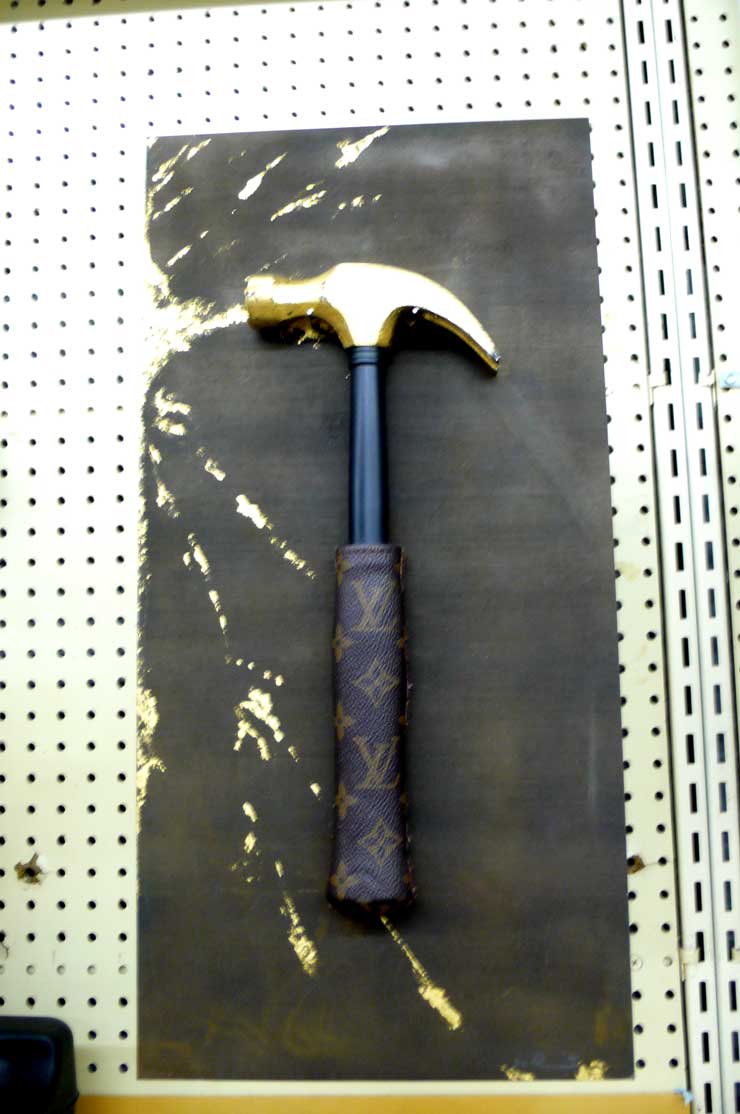 But it is fun and artists are here every day in the store and in the neighborhood. They eat at these restaurants, they shop in these stores, they frequent these bars… so to be able to give them a chance outside a gallery show to showcase their work, not only to their fellow artists but maybe someone who has no idea about their work …. It brings your work to a whole different demographic. If they are a street artist, maybe someone has only seen their work out on the street. To be able to show people that the artist is capable of also putting their fine art work into a show – it can bring it to a whole other level for them and opens up people’s minds to different experiences. 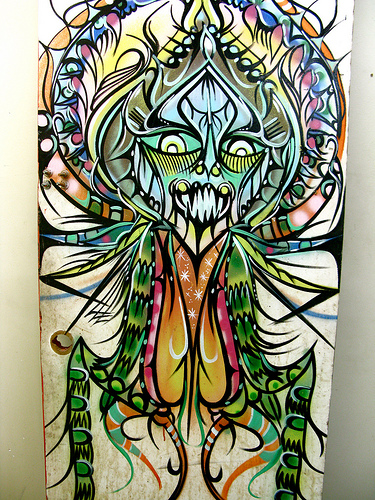 BSA: Do you have any favorite street artists off the top of your head?
Joe Franquinha:Off the top of my head, I really love ROA’s work. I think it’s nice clean work – it feels like pictures ripped out of animal anatomy books. Like old books made of pulp paper that feel like they could crumble. But the animals he does are redrawn at this incredibly magnified size so I really dig his work a lot.

C215 is another artist who I really admire. I also really admire his world traveling capabilities and he just gets up everywhere he possibly can. I was in Morocco, a small town called Esoria right on the water and I was in this square and about 50 yards across from me I could see this stencil on the wall. It was kind of blurry from where I was and I was curious to see whose it was and sure enough it was his work. So it is pretty cool to see his work everywhere I go. 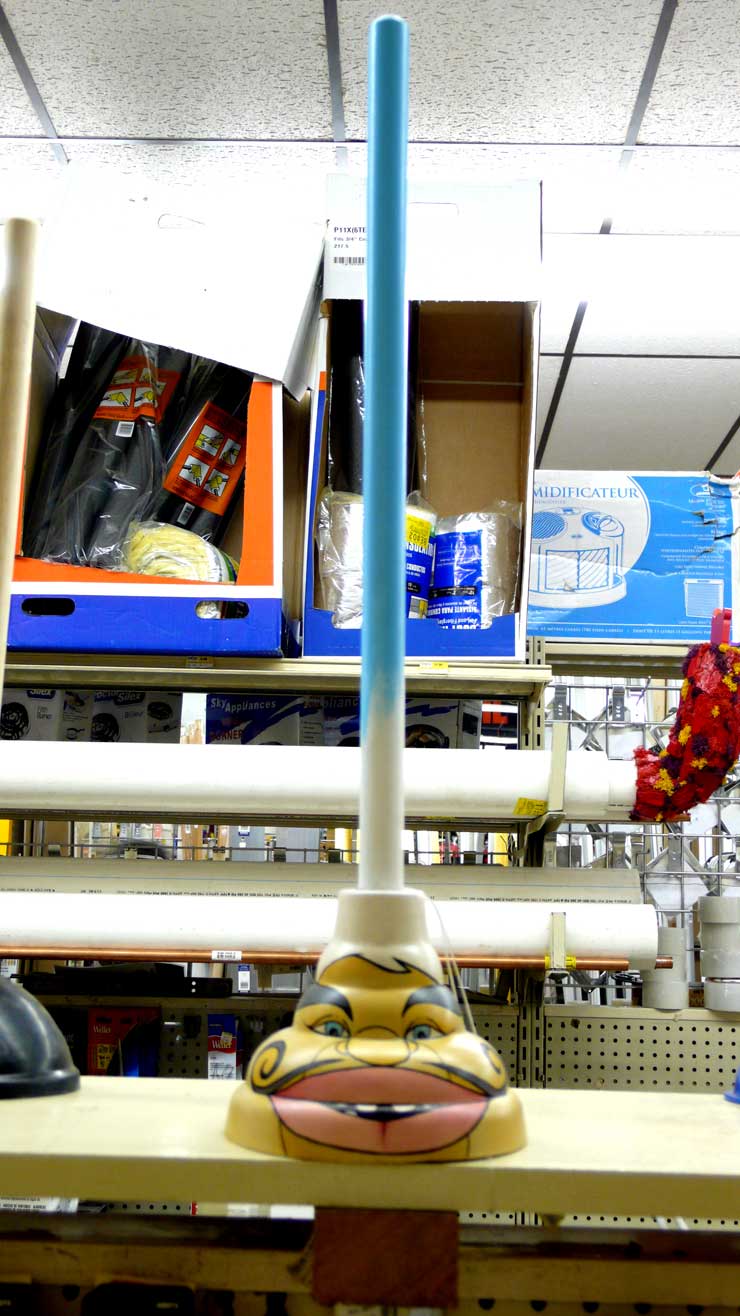 A very entertaining stop animation film made for this years art show in the store. Joe would like to thank Anthony Ferrara, James Peach, Gustavo Roman & Buck Merritt for their creativity, energy and support. You’ll also notice some street art by Chris Stain, Skewville…. who else? 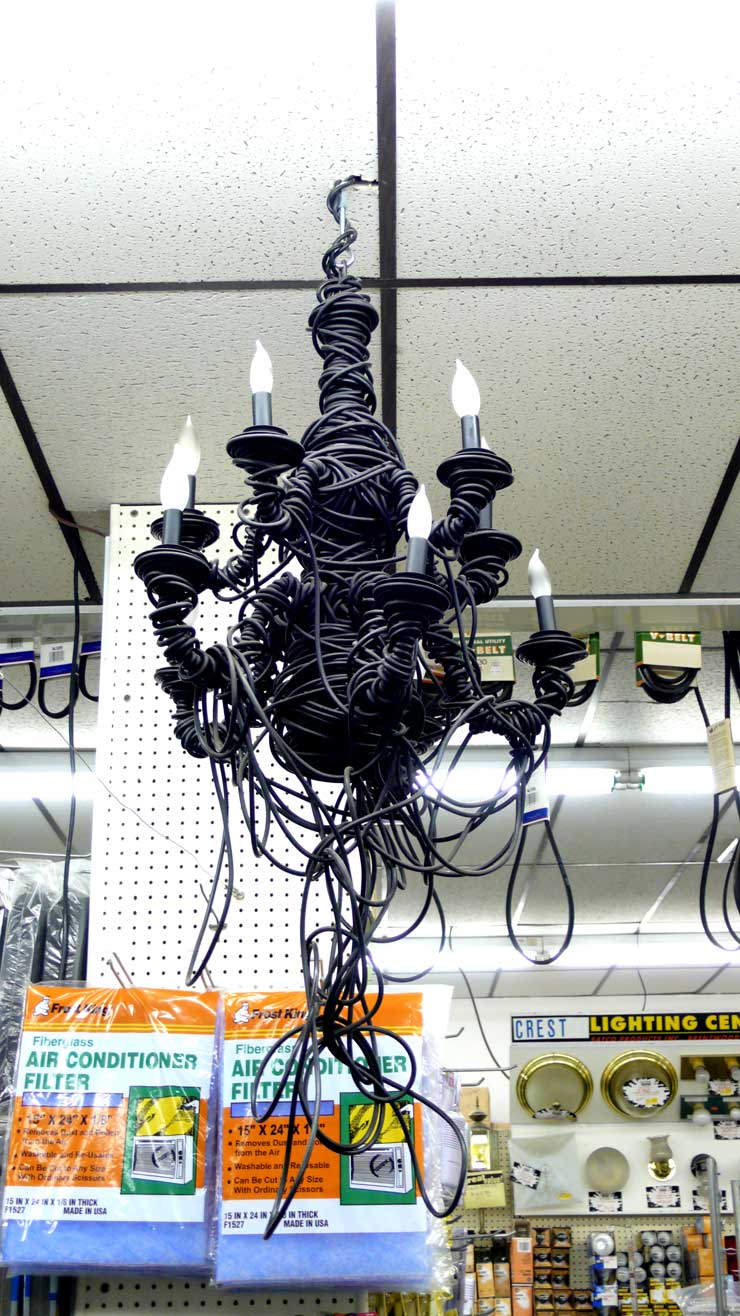 The bed-head look is so popular that it’s spread to chandeliers. By Mike Marra (Photo © Jaime Rojo)

BSA: Is there is a piece in the show this year that you are very excited about, either due to it’s complexity, or a new technique that was used?
Joe: Yeah every medium is different, and it’s not that I love one more than I love the other but I also have my personal preferences. In a show like this, it’s not just about hardware because it is in a store that has been here nearly 50 years, a lot of the people who are in the show aren’t just making their work for a hardware store, they’re making it for us, the Crest people. So one piece in particular that I’m excited to showcase is by Chris Collicot – when you look up close at this piece it’s just a bunch of washers and screws and you step back about 20-30 feet, and because it’s a perspective piece, it’s a picture of my father. To know that my dad struck a chord with this artist when he moved here from LA and he came into the shop looking for some help and he found something more than that. He found a place that he can rely on. So that is one of the more special pieces for me. 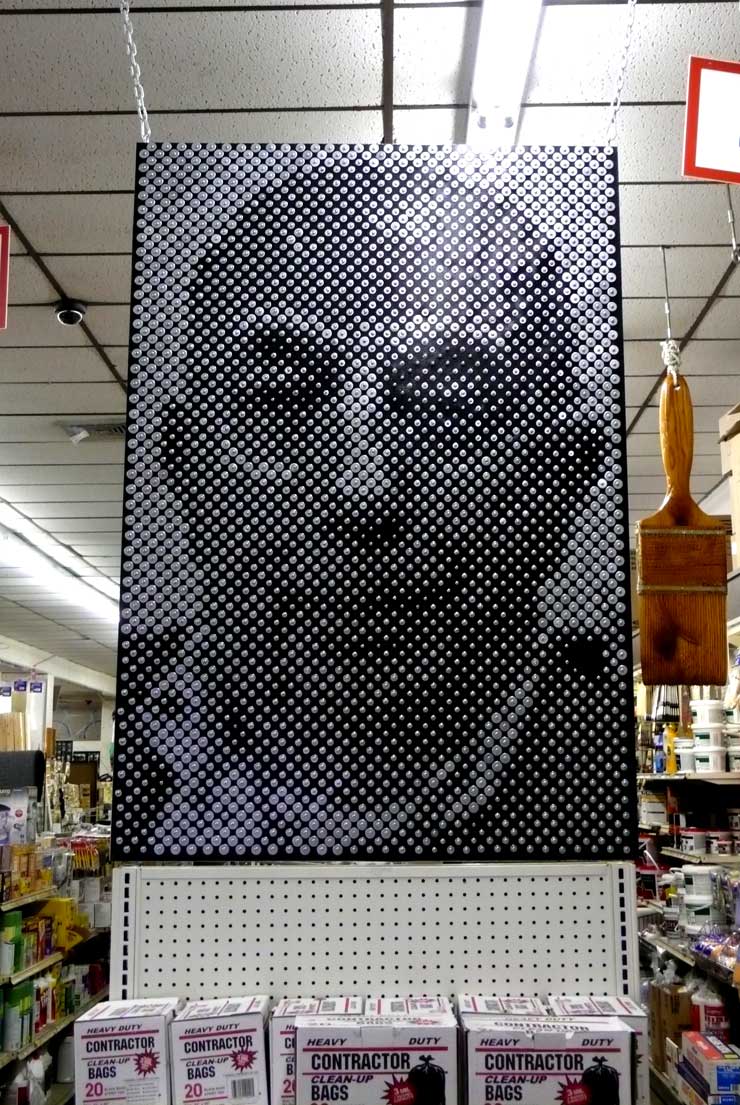 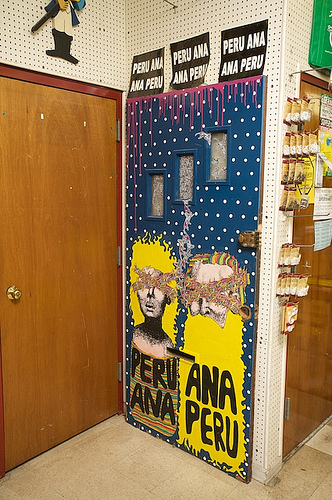 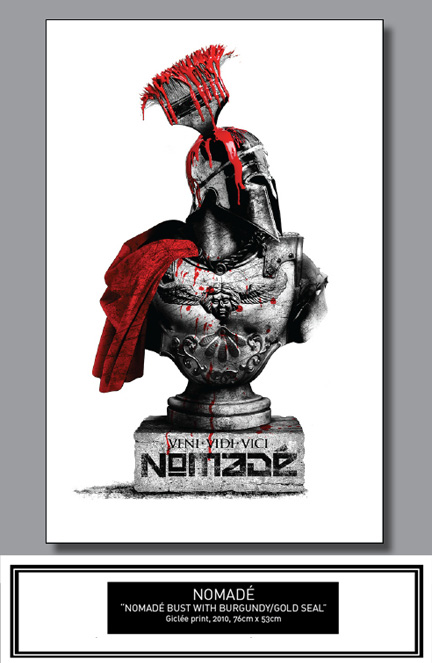 Street Artist Nomade has donated this piece to be silent auctioned during the Crest Art Show. 100% of the proceeds go to the programs of Free Arts NYC, which serves NYC kids from disadvantaged backgrounds with arts and mentorship programs. Drop by the store to place a bid before July 31, 2010. Auction is in conjunction with BrooklynStreetArt.com

A Graffiti Painted Cityscape: Laura Shechter Documents Street Art on Canvas
If there is someone who knows Brooklyn Street Art and graffiti, it is Laura Shechter. Dart, Cash4, Cost, Sace, City Kitty, Chris Stain, she knows them all. And yet she doesn’t know them at all. Whe...
Images of the Week 07.17.11
Our weekly interview with the street, this week featuring Adri, Banksy, Dan Witz, Deform, Demon, Gaia, Jon Burgerman, Ludo, Nick Walker, Olek, Rambo, Slayers, and XAM with dispatches from Paris, Dub...
BSA Top 10 Stories Of 2019 As Picked By You
Greece, Mexico, Poland, Detroit, Brooklyn, Tennesee, Texas, Asbury Park in New Jersey. Your favorite BSA stories were not limited to geography. Aerosol, wheat-paste, yarn, soldered steel, cut stencil...
Sisters Sojourn to Kingston to Update the Truth with Jetsonorama
Two new wheat-pasted and hand painted murals by Jetsonorama in New York State’s first capital call to memory the work of the abolitionist and former slave Sojourner Truth, who at one point called King...
New Digital Video Tour Through The Urban Nation Museum in Berlin / Dispatch From Isolation # 30
Since most of us are quarantined at home right now, arts and cultural institutions have been challenging themselves to devise new programming that can be engaged with in virtual ways. Some of them re...
Celso Chris Collicot Chris Stain Crest Fest Duece Seven Eric Parnes General Howe IronClad Jaime Rojo Joe Franquinha Matt Caputo Mike Graves Mike Marra Montana Peat Wolleager Peru Ana Ana Peru Royce Bannon Skewville Stensoul