Italian Street Artist Göla is in Curitiba, Brazil working with Brazillian Paulo Auma as part of a public art / street art exhibition called “Hibrido”, or Hybrid. Engaging the children, adults, and walls with fantastic and glaring color drenched combinations of genetically modified animals, insects, food, and technological wonders is meant to be more than entertaining eye candy – while it clearly succeeds in doing that. As the French Street Artist Ludo does with his animal/techno fantasy combinations, this four month exhibit is an explicit call for us to think about the goals and results of our experimentation with the natural world, our ethics, and our blind obeyance to scientific endeavors for their own sake. 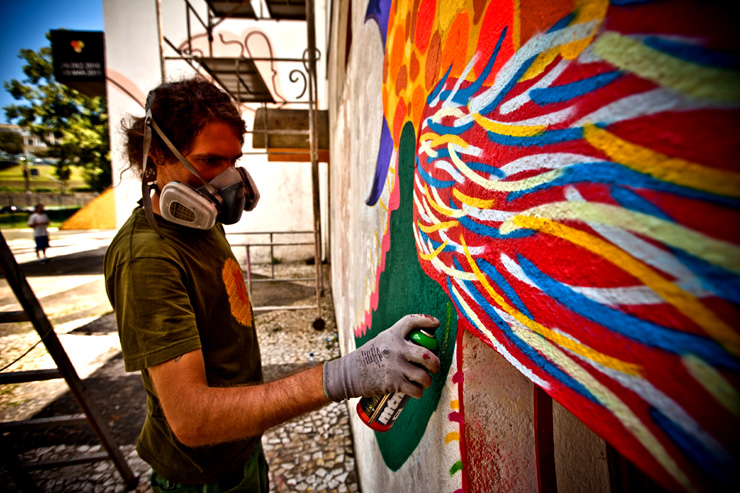 “I try to ask about the relationship between man and all other living beings,”says Göla about the influences in his work.  With his painting and subject matter a meditation on the laws of nature, he warns of the dangers of messing with it. Fascinated with the hybrids that are coming about, his depictions profess affinity for the natural world.

As he name checks futurist artists like Eduardo Kac and Alexis Rockman , Göla explains “My work is influenced by an ever-present closeness with the animal sphere,” as your thoughts wander to discussions of trans-human futurism, fluorescent fish, all terrain dog-robots delivering bombs, and flying nano bugs watching you through the window while you drool over a Lady Gaga video. 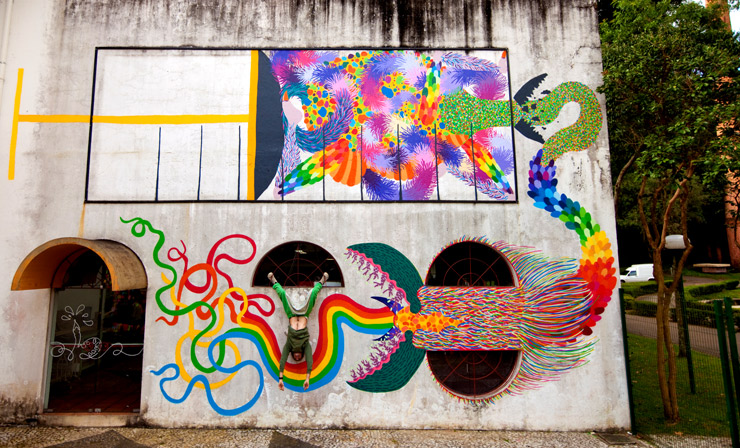 Heady stuff for Street Art you say? Not really when you consider that today’s generation of Street Artists is coming from a huge variety of backgrounds with a flood of abilities, carrying with it bags of tricks only imagined in the aerosol infused reveries of yesterdecade. Göla, for all of this heavy thinking, is a jubilant ombudsman of a hopeful future, bringing an extremely playful and childlike wonder to his work, making it all so much more engaging.

While in Brazil, Göla took time to explore the country and to get up in various towns big and small. Here is the product of his work and collaborations with some local artists. 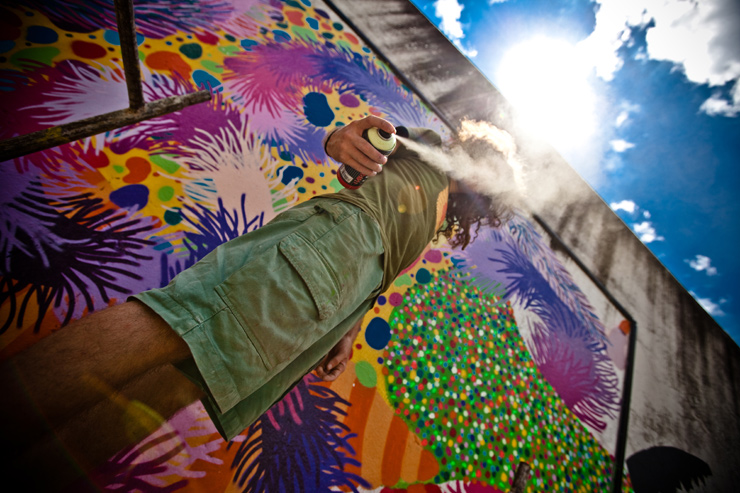 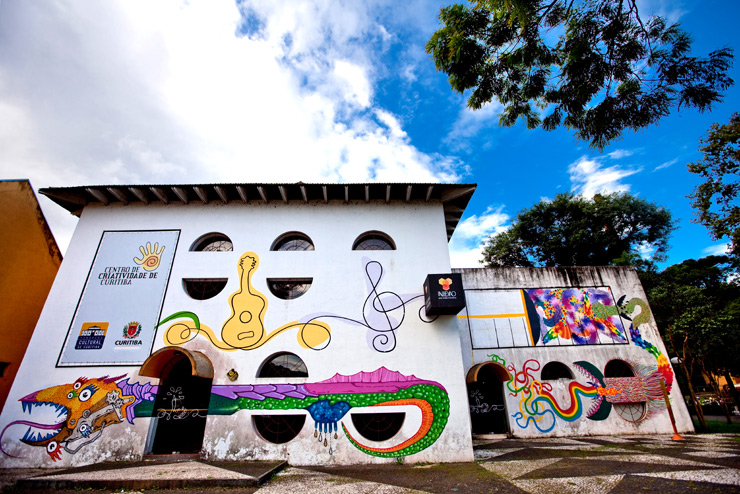 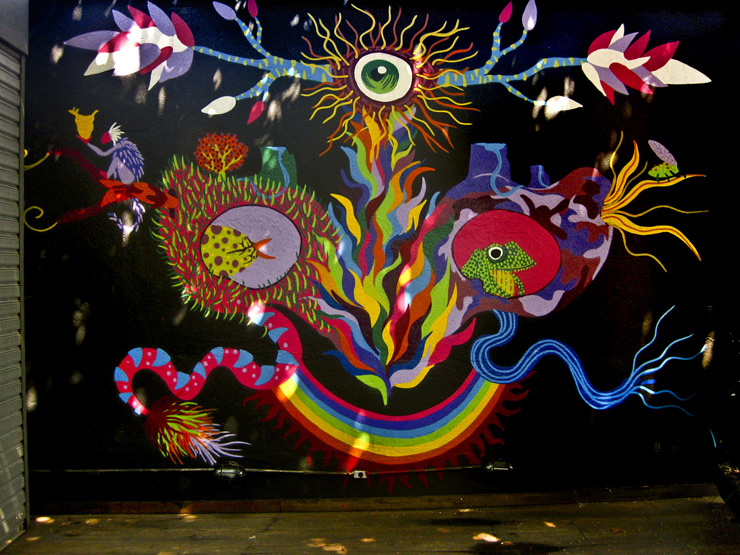 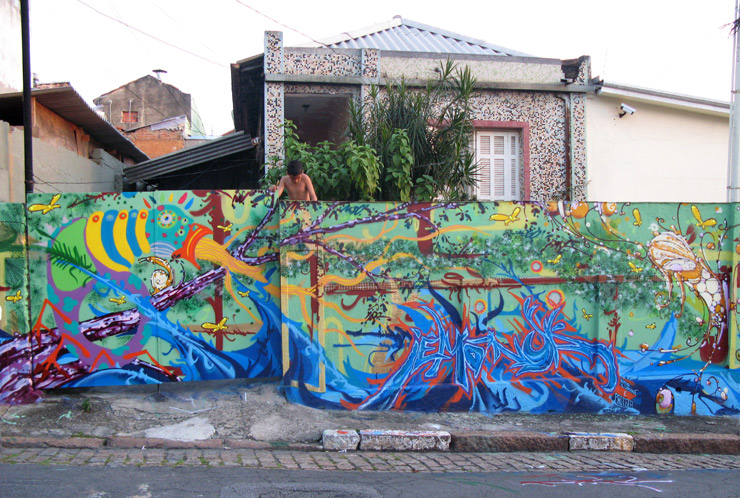 NUART 2014 x BSA Update 4 : Andreco, Icy & Sot, Martin Whatson, Tilt
Stavanger is fully in action today with Borondo, Fra.Biancoshok, Mathieu Tremblin, Evan Pricco, Henrik Haven, and others newly arriving and taking their respective places in the Nuart festival. Soph...
Swoon: "Pearly's Beauty Shop" in LA Helps You Be a Glamorous Philanthropist
SWOON and "Pearly's Beauty Shop" are back! Heliotrope Benefit! Buy your TIX for Saturday 5/21 in Los Angeles HERE! BSA was an early and fervent supporter of the very first Pearly’s Beauty S...
Dulk Illustrates Out on a Limb in Rome
Antonio Segura Donat, aka Dulk is an illustrator and graphic designer from Valencia, Spain who is now also known in many cities for his painting in the street. Since copying images in encyclopedias as...
SPECTER: Inside the Studio
It’s great to find a Specter portrait on the street because he doesn’t waste your time.  His people are people you know, and they are usually looking right at you. You get it. Recognition is ...
Just In Time for #CyberMonday: Mr. Bill Posters Brandishes "Waste World" in UK
To coincide with #CyberMonday we’re bringing you the satiric stylings of Billboard takeover artist Bill Posters in Manchester, England. Bill Posters. "Waste World" (photo still from the video) His ne...
Brazil Brooklyn Street Art Curitiba Dedo Verde Göla Jaime Rojo Milo Nuguem Dorme Paulo Auma São Paulo Steven P. Harrington Tim Tchais