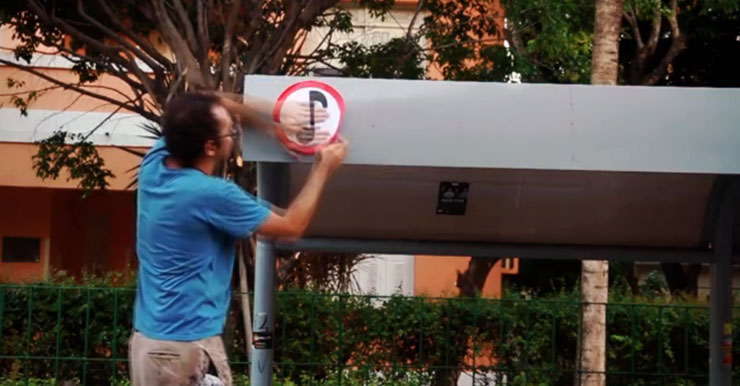 Nanook and Overunder Saw a Building in Half in Reno
For those who were perplexed by the title of ‘residency’ in Banksy’s recent visit to New York, lets just say it was rather tongue-in-cheek to call it that. Artists have been applying for and getti...
BIsser Eats His Greens in Heverlee, Belgium
Belgium Street Artist Bisser is back with mouth agape, this time poised to eat a bit of greens - which everyone should, in all frankness. He is in Heverlee for the Existenz festival and is foregoing t...
Nychos "Battlecat" and Lauren YZ "Night Flight" in Providence
Exclusive shots today for you from Nychos and Lauren Ys in with his “Battlecat” and her “Night Flight” in Providence, Rhode Island. With styles that are complimentarily in some of their fantasy based ...
Got the "Missing Berlin Blues" : Urban and Contemporary
Exactly a year ago we were in Berlin as invited guest curators by Urban Nation Museum's Director Yasha Young to curate the 7th Edition of Project M.  Our exhibition, "Persons Of Interest" was aestheti...
BSA Images Of The Week: 03.20.16
The Street Art world was shaken this week by the announcement and group action by BLU and friends in Bologna buffing/chipping away his street pieces in reaction to the opening of a new show there ...
Barcelona Brooklyn Street Art Dan Witz El t El Tono Feat She One Jaime Rojo Mimi the Clown Narcelio Grud Pablo Aravena Ripo Steven P. Harrington