“We’re really honored to have Martha amongst us this week,” says Martyn Reed, the barely well behaved director of Nuart 2013, as he welcomes the photographer Martha Cooper, who has just touched down next to the new piece going up on the airport control tower by Polish Street Artist M-City. Not that Martyn was there when she landed. “Unfortunately not, what with the Mayor and everything there wasn’t room in the limo,” he says in the joking manner that tells you he is still kind of in awe of the success of this internationally known Street Art festival now underway for its ninth year. 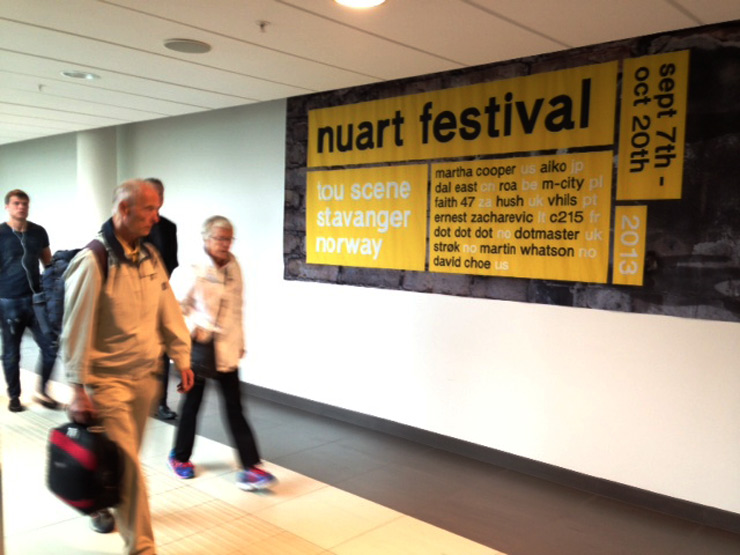 “The trip was fine—a short flight from Oslo,” says Ms. Cooper, who immediately snuck an iPhone photo of the welcome banner with her name at the top, before wondering whether photos were actually allowed in that area of the airport. “I was met by Krystal, a Stavanger resident who has worked with Nuart before and who is very knowledgeable about the artists and the whereabouts of murals past and present,” she says.

“Faith 47 and Daleast were also waiting at the airport, having arrived a few minutes earlier from Cape Town and it was fun to reconnect with them.” And did they all get a look at the new piece that M-City is painting?  “Unfortunately it was raining so we were unable to get a good look at the airport control tower which was shrouded in scaffolding and plastic,” says Ms. Cooper, but “The fact that permission had been obtained to paint the tower is an indication of how city officials have embraced street art.” 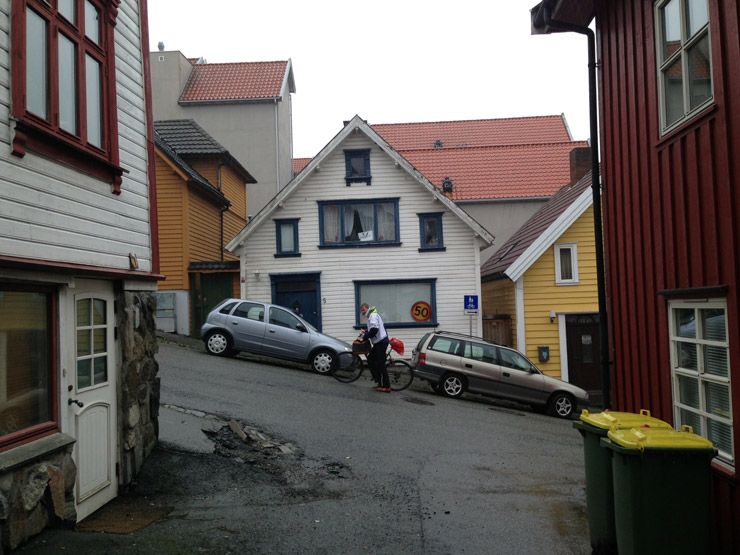 Martha Cooper. “This is Stavanger. I have a bike to ride around on but need to get in better shape to handle the hills”- MC. (photo © Martha Cooper)

As the visiting artists continue to land in Stavanger, already a number of pieces have gone up – ROA and David Choe have installed theirs and run out of town, for example.  “I was especially happy to see C215 again because I hadn’t seen him since visiting Vitry a couple of years ago. Also I was excited to see a number of artists on the list whose work I was unfamiliar with. That always makes a festival more exciting,” says Martha.

Brooklyn Street Art: Have you been to Nuart before?
Martha Cooper: This is my first trip to Stavanger and I was really looking forward to it because I’d heard many great things about the festival from How & Nosm and also photographer Ian Cox, who had shown me beautiful photos of the walls and the charming seaside town.

Brooklyn Street Art: Typically you are an invited guest as a photographer. This time you are also regarded as an artist, right?
Martha Cooper: Correct. Although I usually say that I’m not an artist, it’s actually a relief not to be responsible for official photography. 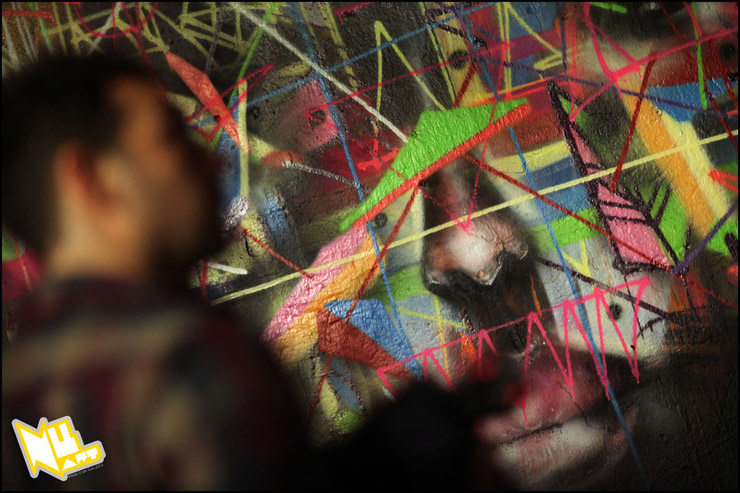 Brooklyn Street Art: What sort of project are you thinking of doing?
Martha Cooper: I’m not doing anything unusual. I’m having a slideshow of over 1300 photos; a sort of graffiti/hip hop/Street Art retrospective that we’ll be showing in an underground tunnel in the main venue. There is a series of short tunnels that artists are painting. Aiko is stenciling the sides of mine and the slides will be projected at the end.”

Cooper mentions her buddy Aiko, who will also be stenciling some work of her own on distinctive Norwegian seaport architecture that sometimes has as much character as the new stuff that adorns it. Aside from her projected installations, Ms. Cooper will of course be every where she can possibly be with her camera in hand, and probably one or two in her backpack.

“Martha’s here as an artist and our guest, she’ll be treated the same as all of our artists; Like a Queen,” Reed cracks, “only on a bike with a camera.”

“But seriously,” he continues, ”Martha’s quite rightly perfectly happy being recognized as a documentary photographer and I wasn’t sure she would accept being invited as an artist, but she did and we’re very thankful of that. I don’t see any reason why Martha can’t occupy this space. Inviting Martha to participate as an artist is due to the fact that, when I look at her work, I see art. I’d also heard she was a wonderful down to earth person with few airs and that’s very important for Nuart, which is fundamentally a volunteer-run organization.” 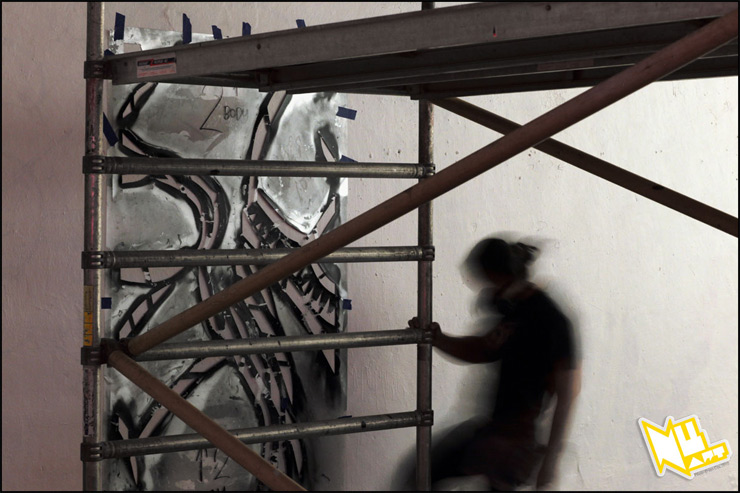 Ian Cox. Aiko teaser. “The blurred character is a volunteer who was helping Aiko to move her scaffold”-IC. (photo © Ian Cox)

Already the two of them have been having fun together checking out possible walls for projects, digging up found materials and strategizing how to prevent visitors from stepping in front of the projector on opening night. Also there was the moment in one of the installation tunnels when Martha came rushing toward him with her phone out to him saying “,Quick, quick, it’s the attaché to the Norwegian Culture Minister, they want to speak to you”. It was a confusing moment he won’t ever forget he says, because he couldn’t imagine why the minister was on Martha’s phone.

Reed recalls, “I was thinking, a) it was a practical joke, b) ‘how did they know where I was,’ and more importantly, c) How the hell did they get Martha Cooper’s private number?” While Martha stood there beaming he took the phone and the voice on the other end said, “ Hello, this is the personal assistant to the culture minister Hadja Tajik, she’d like to visit Nuart on Thursday…” .

“After the call, we stood there a little dumbfounded, but after scratching our heads for a while trying to work out how they came to call Martha, we realized the festival had used my bank card to buy a Norwegian SiM card for her phone and that the Government had searched and found the number registered to me,” he says with a brightening realization, and then a darkening one. “I know, very NSA. Anyway, mystery solved.”

But for him, the moment was a marker in his memory, he says, “The image of Martha Cooper rushing over to pass me the phone to speak with the Culture Minister of Norway will stay with me for life. It felt like the festival had finally come of age.” 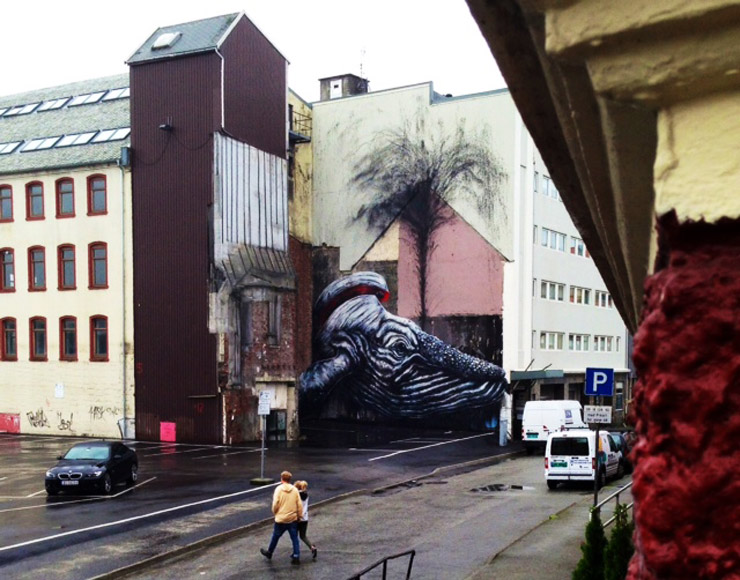 For her part, Ms. Cooper is laying plans for the out door component of her participation as artist/documentarian/photographer. “We are also planning to project photos on the sides of buildings in town,” she reveals, “ – including a huge silo. This will be the night of the opening and we won’t know whether it works until it happens. I’ve selected about 25 verticals and horizontals with a little more contrast that I think might work well.”

Reed doesn’t much mind what they end up doing – he’s just glad that he’s having this opportunity right now. “Martha holds the unique position of being a forerunner, pioneer, ambassador and also important contemporary voice in our culture – we wanted to salute that.” 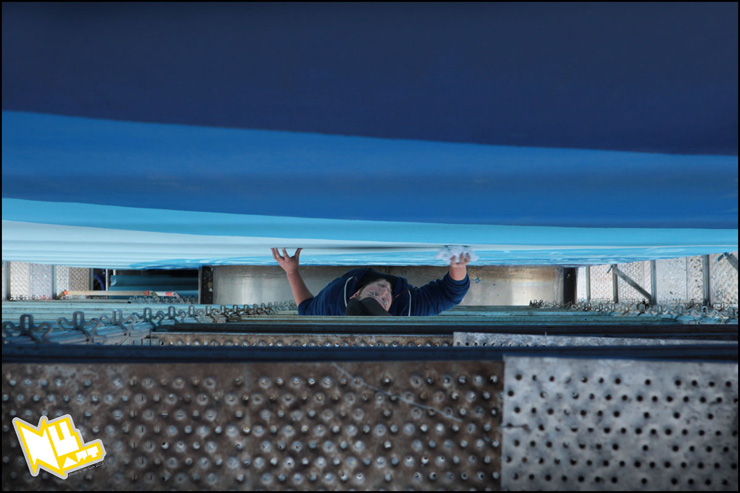 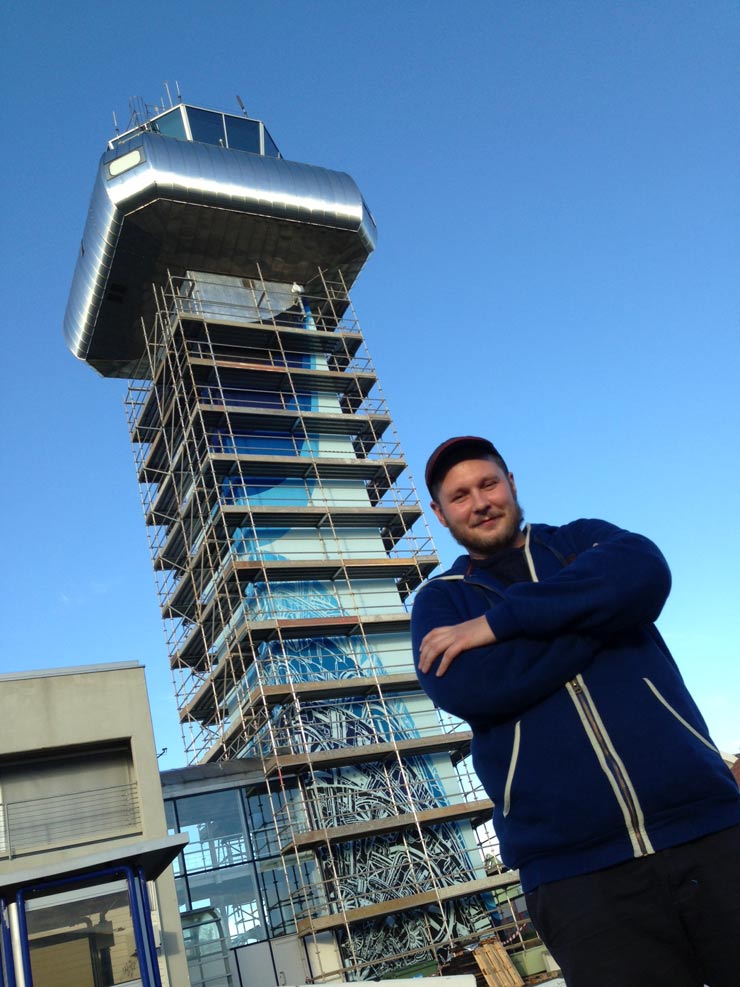 Martha Cooper. “M-City with his completed control tower mural. Scaffolding to be removed in a day or two but he has already left”-MC. (photo © Martha Cooper)

disCONNECT: Aida Wilde
You have been seeing a number of rooms in this old Victorian home regaled and reimagined by a number of artists over the past few weeks as we have featured the installations for a unique exhibition c...
BSA Curates at 3rd Artmossphere in Moscow 2018: Open Call For Artists
BSA founders Steven P. Harrington and Jaime Rojo are part of the Curatorial Team for the 2018 Artmossphere Biennale and today BSA is pleased to announce the "Open Call" for artists to apply. The St...
Artmossphere Dispatch 1 : L'Atlas, Sepe, Martha, and All Female Graffiti Jam
This week BSA is in Moscow with you and Urban Nation for Artmossphere 2016, the 2nd Street Art Biennale, a group exposition introducing 26 Russian and 42 foreign artists who were shaped by street ...
BSA Film Friday: 10.09.15
Our weekly focus on the moving image and art in the streets. And other oddities. Now screening : 1. Dale Grimshaw Heroically Celtic in Camden, London. 2. Zalez Surfs and Stencils a Good...
2010-2020 : 10 Impactful Street Art & Graffiti Interventions & Events of the Decade
BSA has been here with you for this entire decade - an honor and a privilege. Reviewing the many interventions and events we witnessed and shared with our readers, we realize that this grassroots peo...
Aiko David Choe Ian Cox M City Martha Cooper Martyn Reed Norway Nuart 2013 Roa Stavanger