This week seemed busy on the streets of New York after LA graff writer Saber started us off on Sunday with a sky-writing campaign that was politically charged arts advocacy and a social media-soaked smackdown of the right wing in the US. From culture-jamming to political commentary to social advocacy, it looks like some Street Artists are getting back their voice in many pieces that are espousing a message.  Not all of them of course. 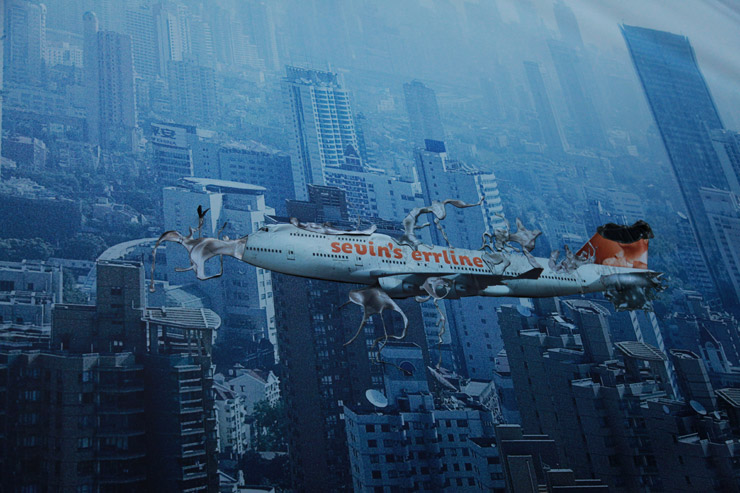 Sevin’s Errline. This ad-bust wins the week. In this case the artist(s) attached his/her /their decomposing, surrealist airplane to a huge vinyl banner that is shilling luxury condos in Manhattan. It’s a prime example of how un-commissioned and illegal Street Art can create and lead conversations on the street. (photo © Jaime Rojo) 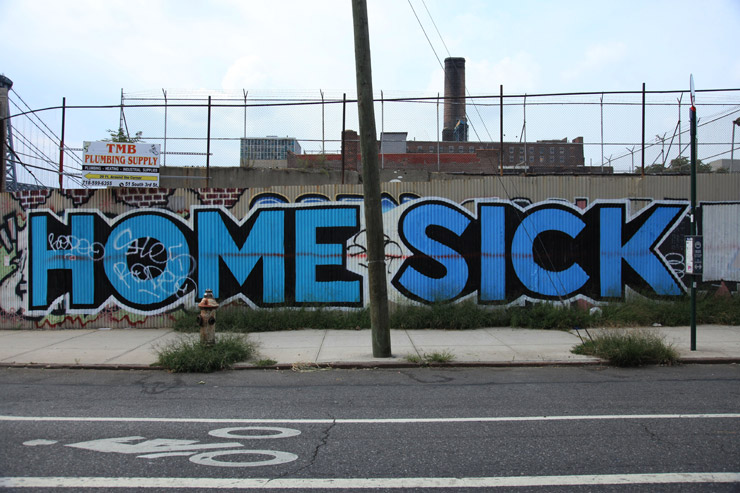 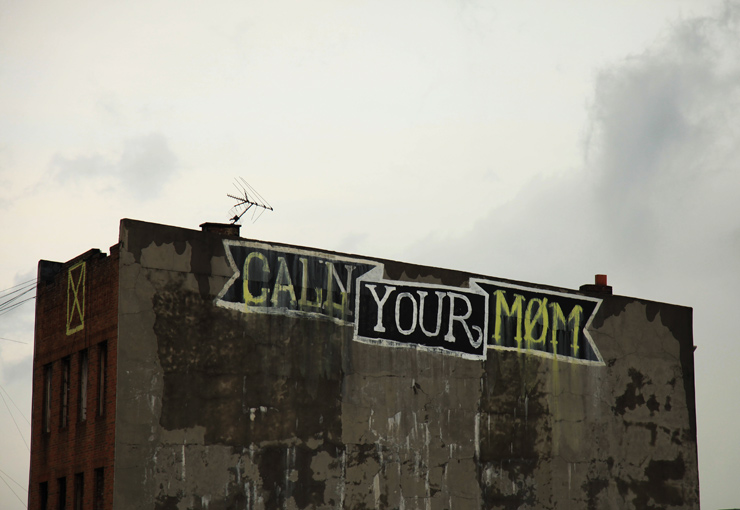 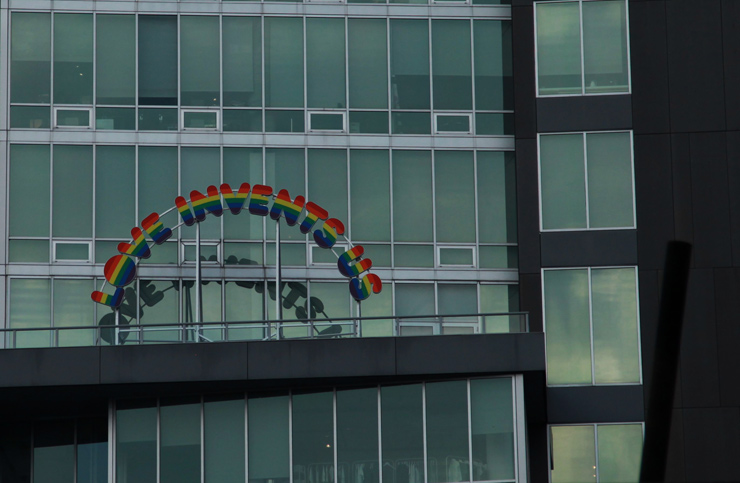 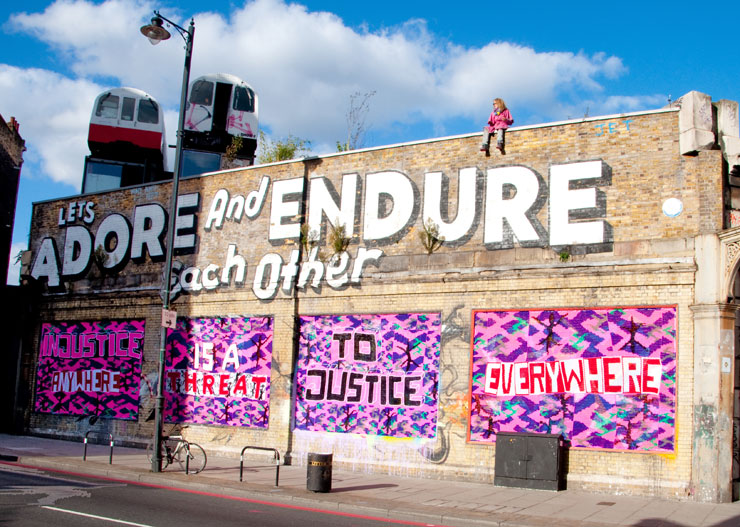 OLEK. This is a brand new piece on the walls of the Village Underground in Shoreditch, London. Explains Olek, “It is in conjunction with a campaign with street artists for an anti-slavery event that is happening this week.” ESPO’s words are across the top. (photo © OLEK) 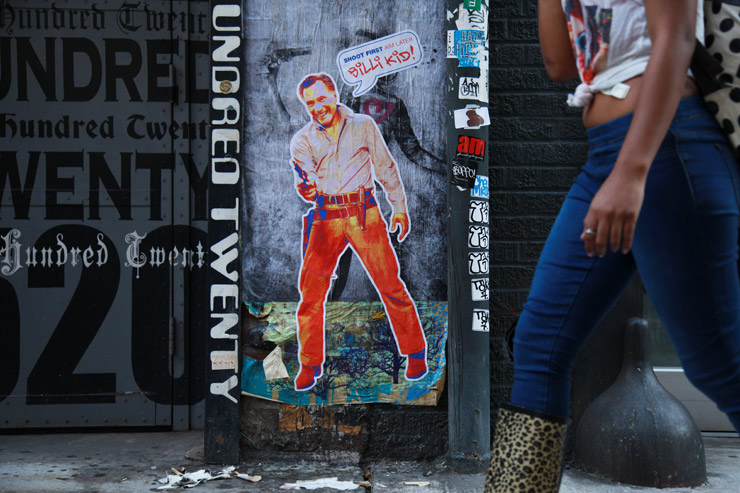 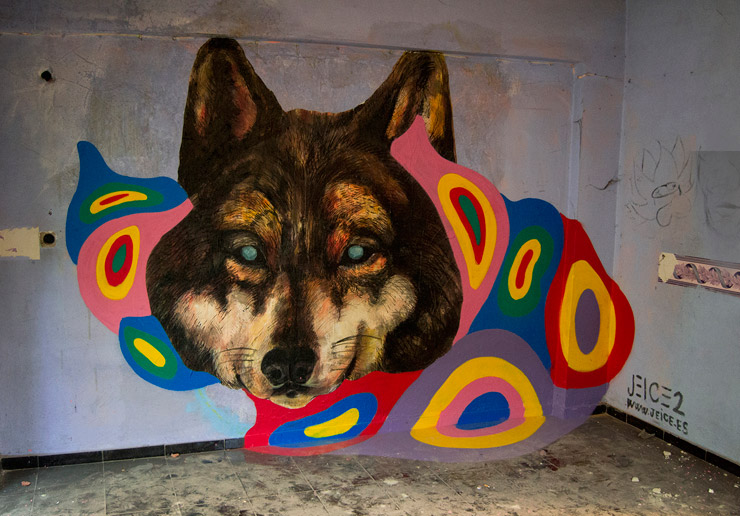 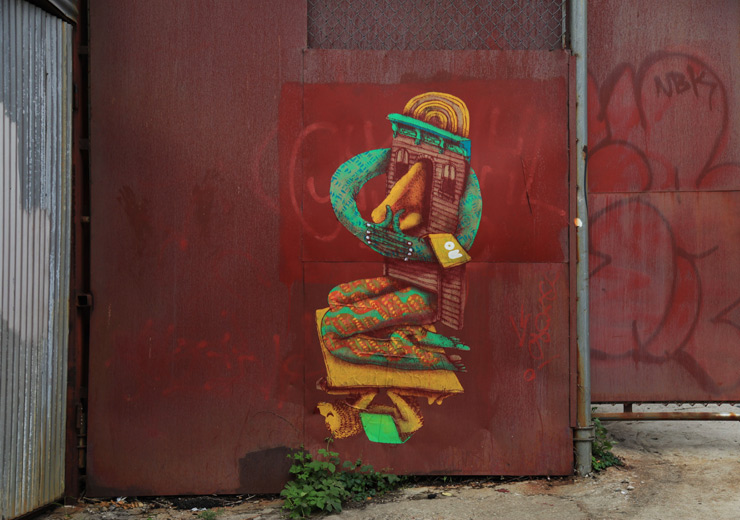 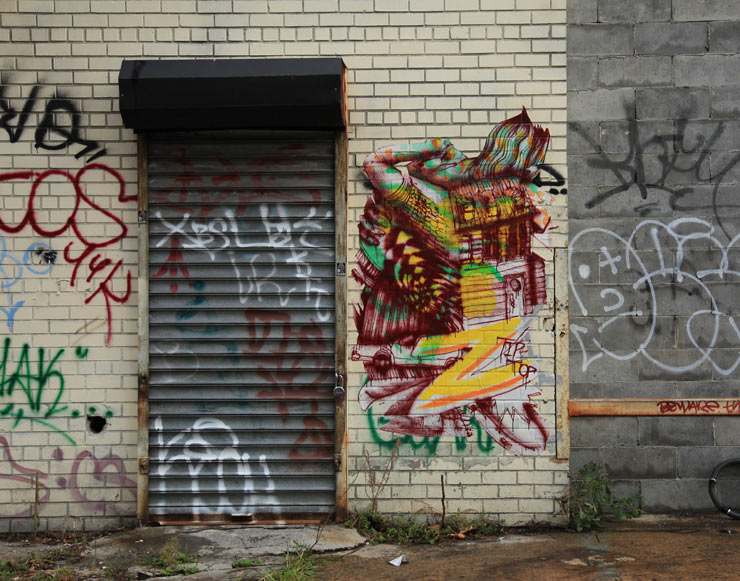 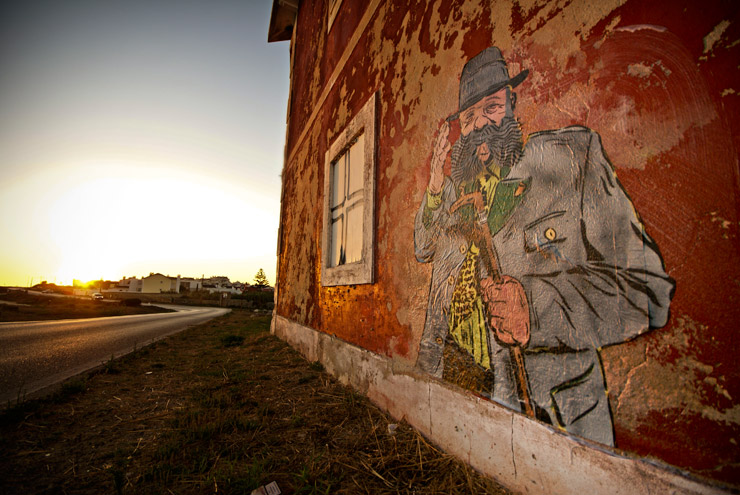 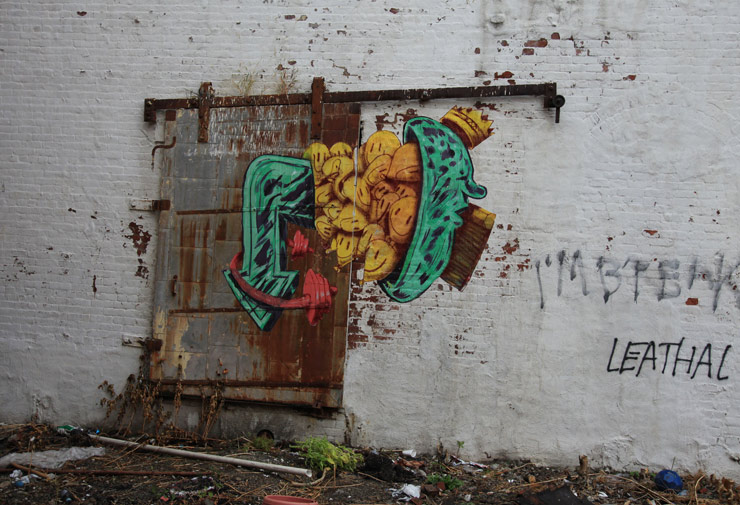 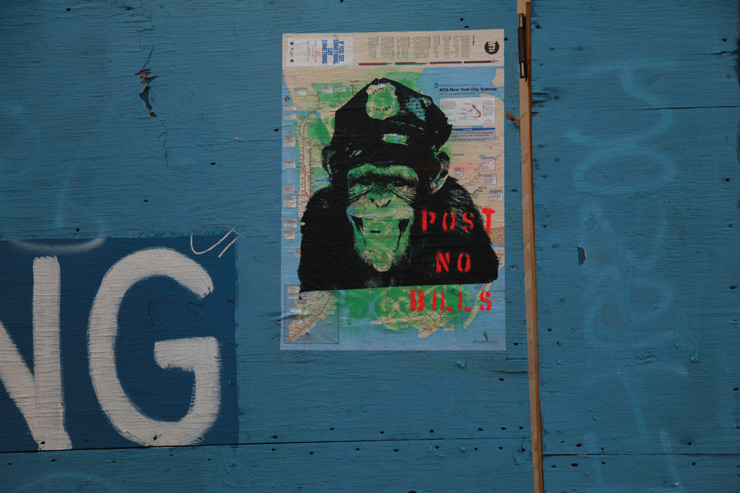 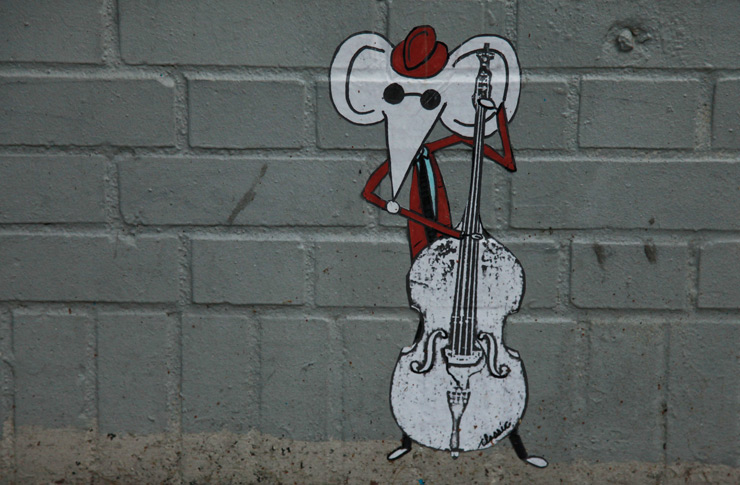 And now I vil play a leetle classic piece on my bass for all you jazzy cats. Classic (photo © Jaime Rojo) 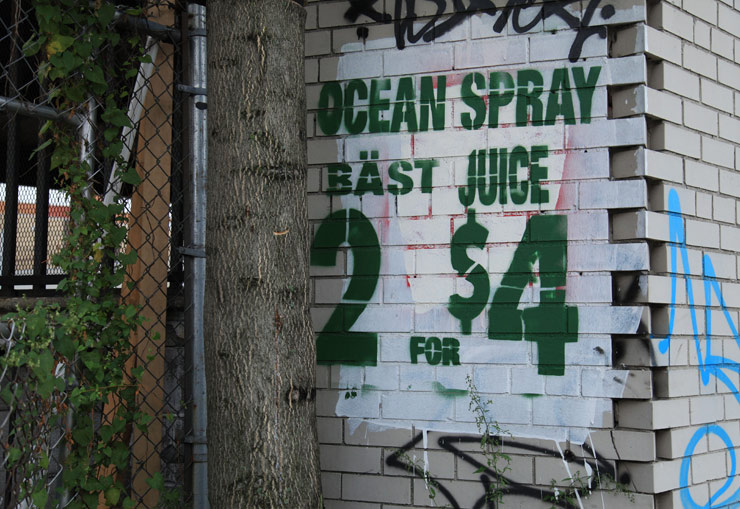 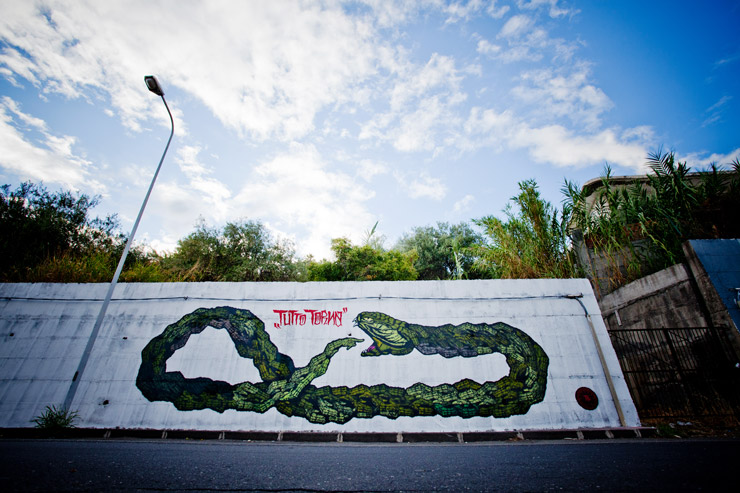 As he paints the giant 8-shaped snake biting it’s tail, the Italian Street Artist JB Rock explains his new piece this way, “This is a portrait of our modern society and especially of my beautiful but very counterproductive country. For this work I’ve been inspired by the UROBORUS concept, remixed with the Infinity symbol”. 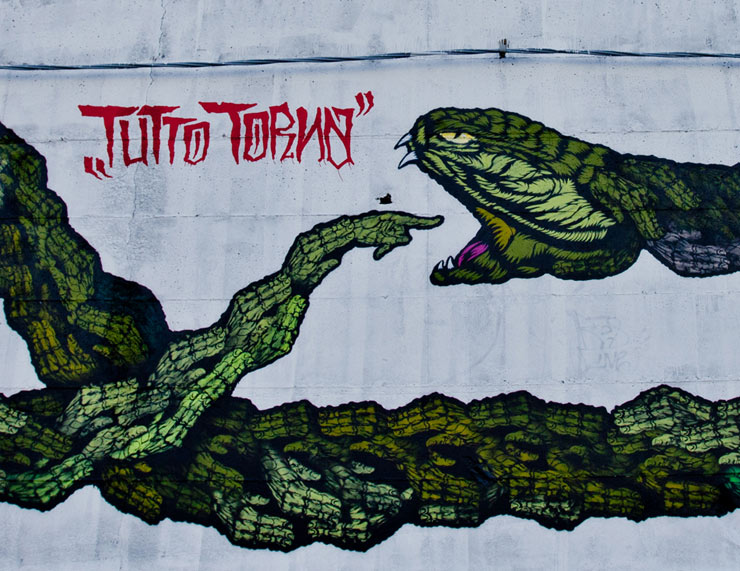 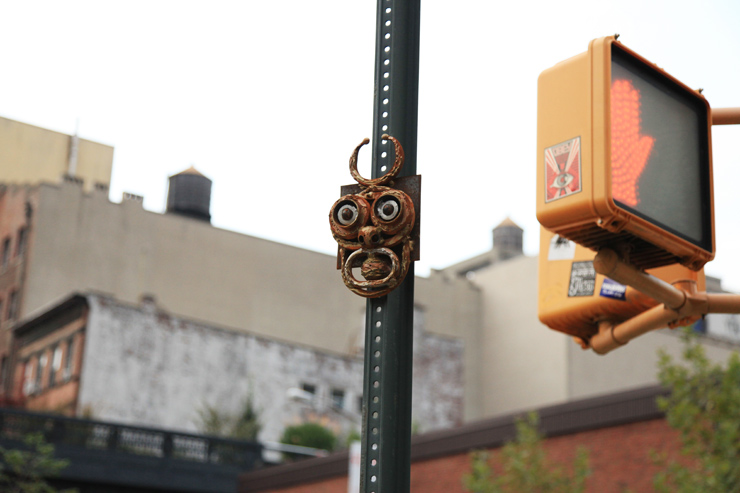 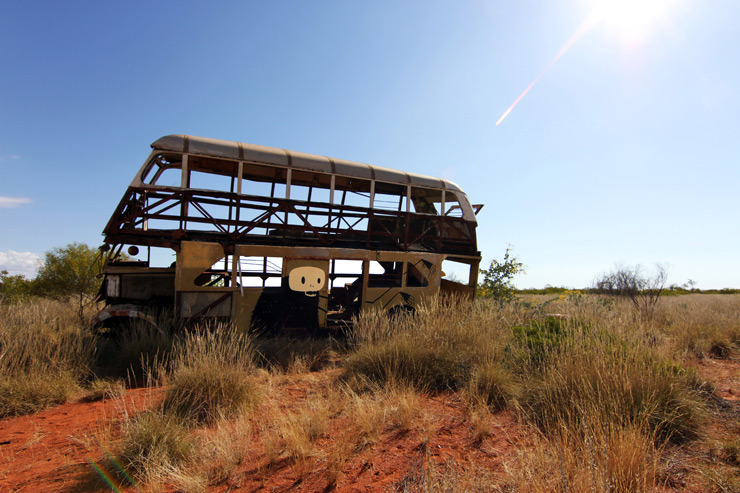 Creepy in the Pilbara desert adorns the carcass of a double decker bus. (photo © Kyle Hughes-Odgers)

“I traveled up to Port Hedland which is an industry Port in the North West of Australia and painted some walls and found objects in the desert as part of a residency with FORM gallery,” says the Perth-based Creepy. 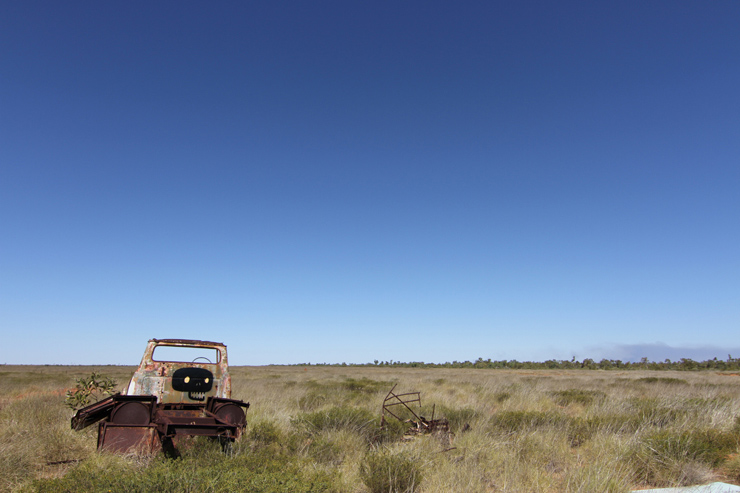 Creepy in the Pilbara desert on the back of an old pickup. (photo © Kyle Hughes-Odgers) 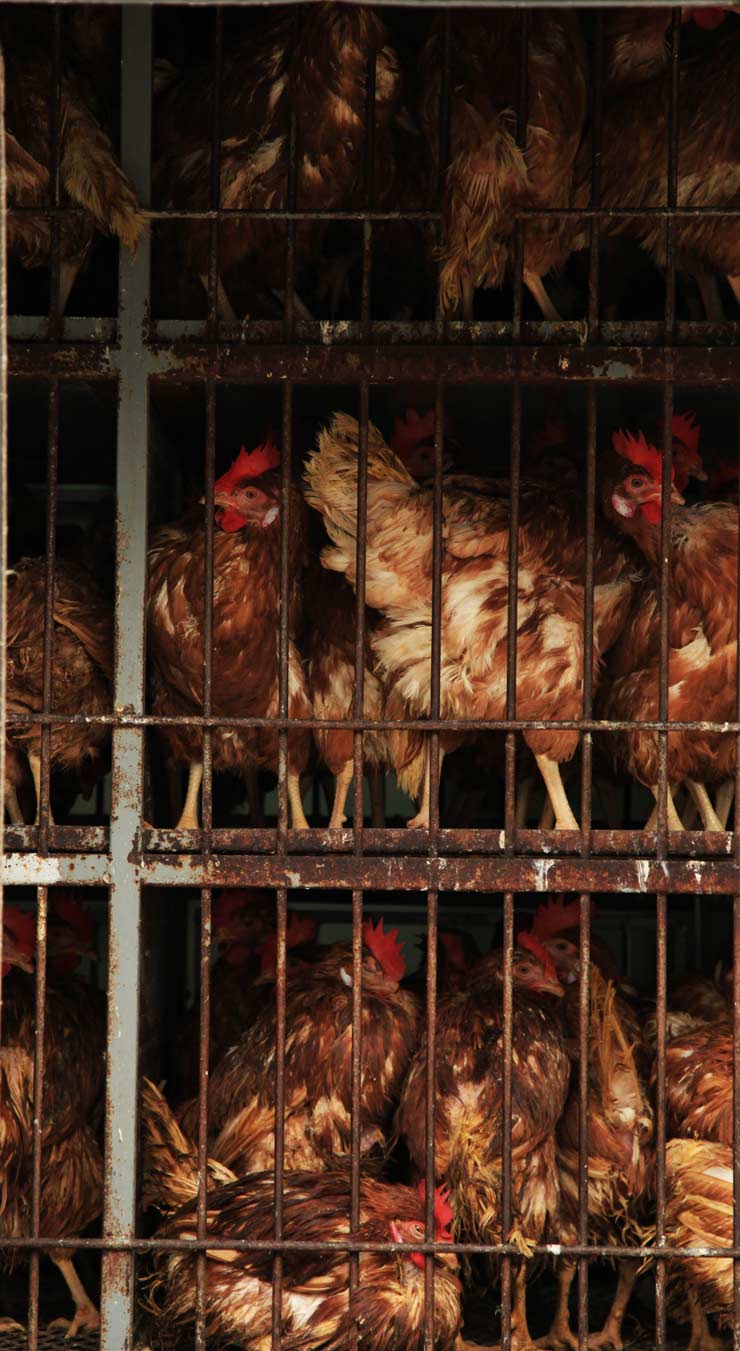 Yes, this was shot in Brooklyn, in case you were wondering. Untitled (photo © Jaime Rojo)

BSA Images Of The Week: 11.02.14
Marathon Day in NYC today with people running in the streets more than usual, the time clock moved back an hour today, mid-term elections are this Tuesday, and New York's first ebola patient is fe...
BSA Film Friday: 01.10.14
Our weekly focus on the moving image and art in the streets. And other oddities. Now screening : 1. Vhils x Pixel Pancho in Lisbon 2. How Nosm in Lisbon 3. NEKST FOREVER from Pose & Revok ...
Snow In Day in NYC : Let's Head to the Park
Art in the Streets! Art in the park! Okay, a really loose interpretation here, but who can deny that the hand of nature often looks like it belongs to an artist? Central Park. February 2017. NYC. ...
#4 Wish: BSA Reader Zia; 12 Wishes for 2012
For twelve days we're presenting twelve wishes for 2012 as told by an alternating roster of artists and BSA readers, in no particular order. Together, they are a tiny snapshot of the people wh...
Pop Culture at Citric Festival in Torreblanca, Spain
Celebrity, photorealism, illustration, fantasy, spectacle. These have always been part of popular art culture and have had an increasingly strong representation in Street Art culture, particularly in ...
Bast Billi Kid Brooklyn Brooklyn Street Art Call Your Mom Classic Emergence Festival Espo Home Sick Italy J Jaime Rojo JB Rock Jeice 2 Manhattan Meeer Sau ND'A New York City Olek OverUnder PM AM Portugal Reader Sevin's Errline Sicily Steven P. Harrington Ugo Rondinone