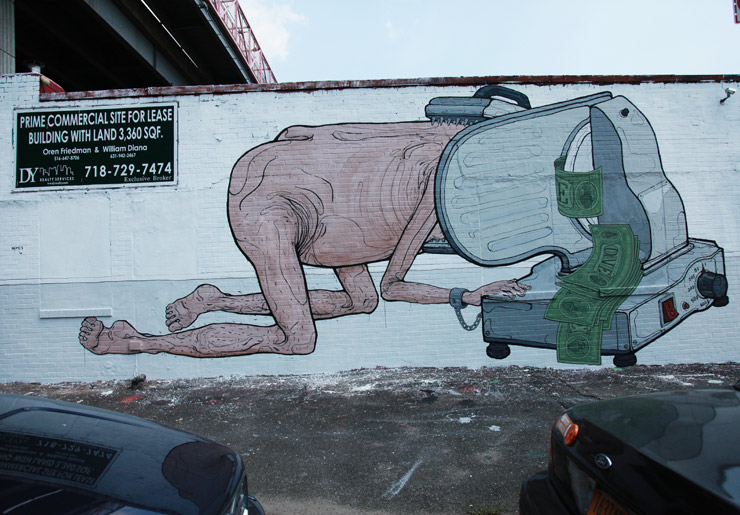 Italian Street Artist NEMO’s made his first trip to New York last week and immediately gave one of his desperate men to the cityscape in Williamsburg.

We should mention that the subject was obviously a man until some neighbors complained and one particular detail had to be buffed to satisfy their tastes. The artistic metaphor of a person being fed into a meat slicer to produce dollars was not offensive by the way. NEMO’s made the change perhaps reluctantly and as an act of a polite guest, but not without some serious consideration and conversations. 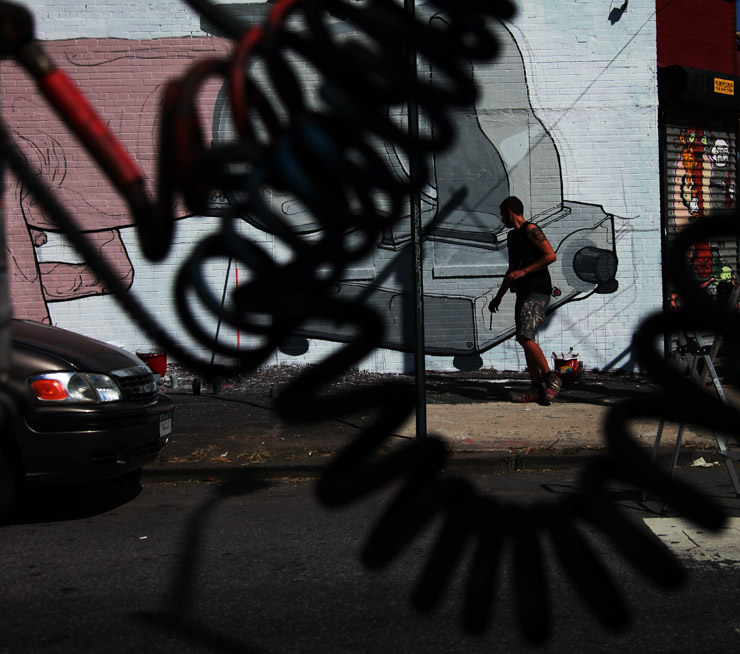 A social and political commentator, this illustrator of the comedic and the grotesque is not afraid to portray some dirty hypocrisies and conundrums of modern existence. Since we have featured Nemo’s a number of times, we were eager to find out first hand who are his influences and what motivates him to depict these fleshy ghoulish men who simultaneously  perpetrate and are exposed to dangers of the world.

The tenor of his answers didn’t surprise us, it only confirmed what we had thought – Nemo’s is an adept observer of our dualities with an fondness for gallows humor, in possession of a sense of wonder at our potential as humans that is tempered by disgust at our weakness and folly. 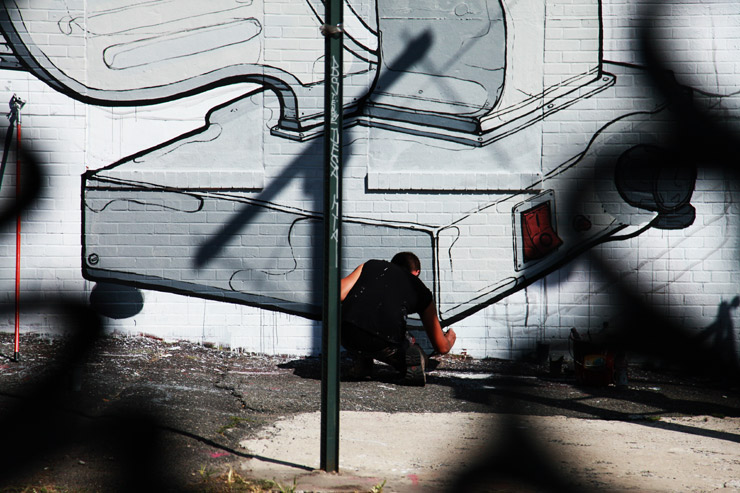 Brooklyn Street Art: Is this your first time in NYC?
NEMO’S: Yes, this is my first time out of Europe as an adult. I was born in Bolivia, La Paz but my parents are Italian and they took me to Italy when I was 4 years old. My father is a doctor and he was in Bolivia working with the miners. My mother is a homemaker.

Brooklyn Street Art: What’s your impression of NYC so far?
NEMO’S: I love New York very much. Las year I was in London but I prefer NYC to London – I don’t know why. New York is really big but I like the New Yorkers. People were very friendly with me the second day I was here. I like the fact that New York has tons of different cultures and immigrants from all parts of the world. In Italy the politicians don’t like diversity even though we Italians are immigrants as well.

For example in the early 1900s many Italians emigrated from Italy to America and South America –there is a Little Italy neighborhood here in NY for example. Al Capone was the first gangster in America and he was Italian. We Italians are good people but when we talk about immigration and other people we are the worst ­– especially the politicians. 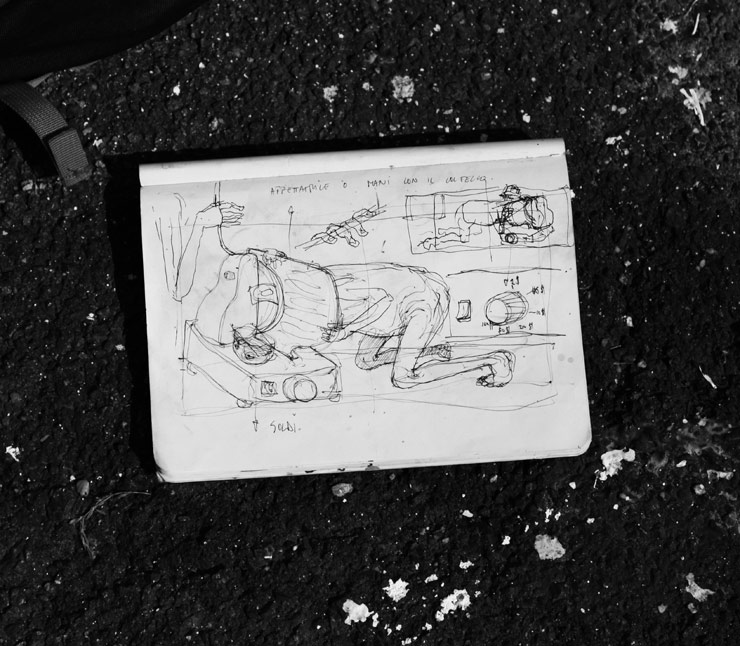 Brooklyn Street Art: So your first time painting on the streets in NYC is in this noisy neighborhood under a bridge. How do you like painting here?
NEMO’S: Yes this is my first time painting in NYC but it isn’t my first time painting in a heavily trafficked area. In Italy, especially in Rome and in Milan, the traffic is worse. Actually for me here under the bridge the condition is good ­– this bridge is not as heavily trafficked as they are in Italy. When I came to NYC I couldn’t believe the environment because in Italy is much worse. NYC is probably four times bigger than Milan but the noise is much less. 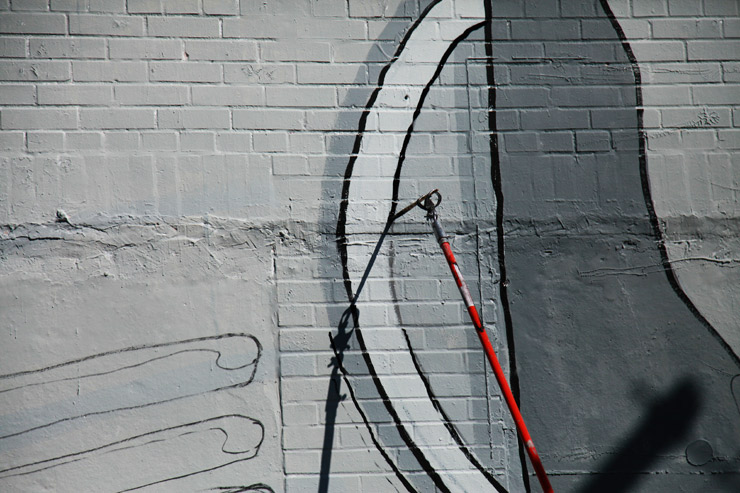 Brooklyn Street Art: How do you consider yourself as an artist: A muralist? An illustrator? A Fine Artist?
NEMO’S: I usually I don’t like to call myself an artist. In our society artists are considered super-heroes and I’m not a hero. I’m a normal guy and I paint what I think. I’m happy if people like my drawings but really I’m happiest when I paint in the streets. I began as a writer with a can when I was 16 years old. I did graffiti only for a year because I really didn’t really have a good can control. I almost always would much rather paint my characters with a brush.

Brooklyn Street Art: Who are your inspirations?
NEMO’S: I take a lot of inspiration and a lot of direction from the filmmaker David Cronneberg. I like his work and very much his interpretation of the relationship between men and insects in his movie “Naked Lunch”. I like surrealism and some Italian and French illustrators. One favorite is Francis Bacon and I also like the Italian painter Antonio Ligabue. He was like Van Gogh but much sadder. He was interested in animals as subjects as well as men. 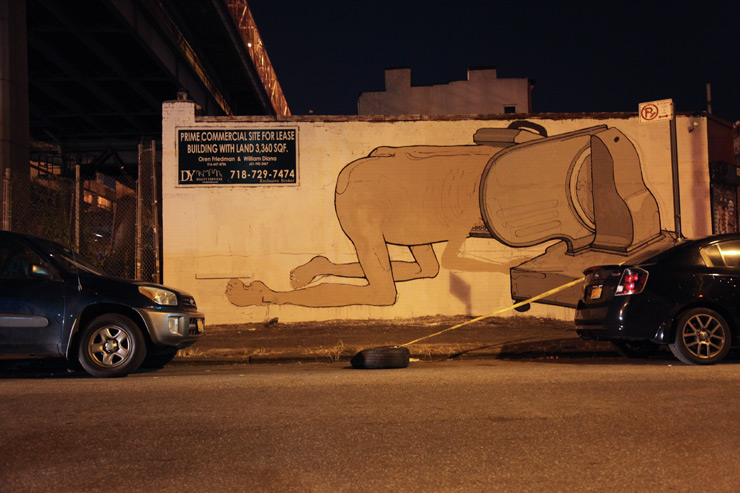 Brooklyn Street Art: How about music influencers?
NEMO’S: I like Trip-Hop music. I like Radiohead, Interpol. I also like Rap music but not the new contemporary rap music – only the black rap music. I like the Fugees and Lauryn Hill, rap from the 80s and also blues-rap.

Brooklyn Street Art: Can you talk about your work? Why are your characters so sad?
NEMO’S: I usually try to portray our society and the current situation of our humanity with my work. I try to draw my characters and build them around what I observe happening in the world. So my men are sad creepy and wrinkled. My characters have the burden of humanity on their shoulders. I personally suffer a lot from what I see every day.

Daily existence is difficult for me because I see a lot of bad things happening in the world. I try to put aspects of my own condition and the bad condition of humanity into my characters. I draw the men without clothes because that’s how I see the current condition of humanity. I see our society being constantly humiliated so I depict what’s happening in and to our society in my characters. 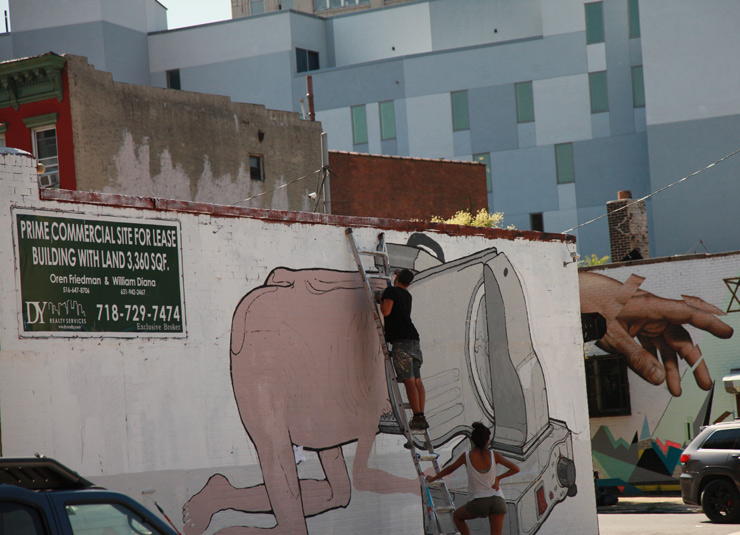 Brooklyn Street Art: During the first couple of days the character on the wall had a small penis. The final piece shows the character without it. What happened?
NEMO’S: Because the owner of the wall is a religious man and because the district where I painted is full of religious men I had to erase penis.

Usually I paint my character naked to portray human vulnerability. The penis or others sexual/sensual organs are important to convey the feeling of my drawings. They are important because they are not accepted by society. The penis is a little symbol of what society doesn’t want to see. 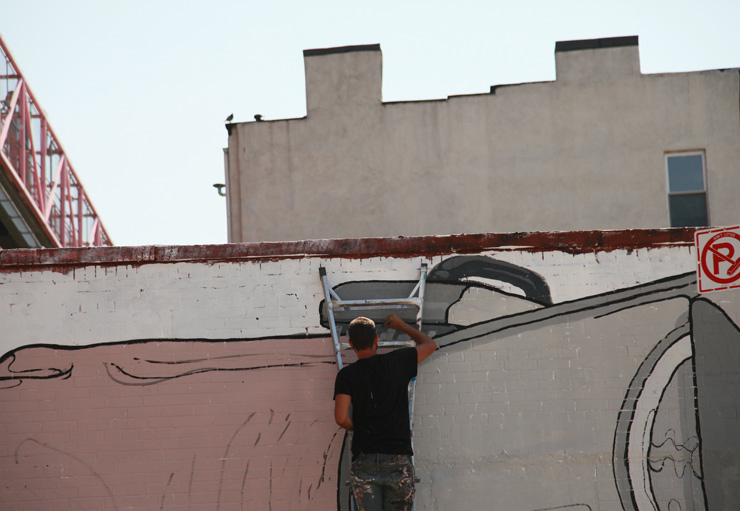 Brooklyn Street Art: Permitted walls usually come with strings attached from the landlords. They sometimes insist on certain themes not to be portrayed on their walls. Most people would consider this censorship. How do you feel about this?
NEMO’S: The word “legal” in this context is a paradox. Drawing a penis is “legal” and censuring it is “illegal”. Someone can say that the penis is an obscene thing, but I’m from Italy and some of the best pieces in world art history have a penis; David by Michelangelo in Firenze, the Nettuno in Bologna, even the Bull near Wall Street in Manhattan. In Roma, in the Cappella Sistina (Sistine Chapel) Pope Pio IV censured and “dressed” God and other Saints painted by Michelangelo.

So when someone says art is somehow “illegal” the situation is really about what people think and are afraid to see. In my opinion real “Street Art” fights against these things! Real “Street Art” is illegal and totally free! I try always to paint what I think not to compromise. 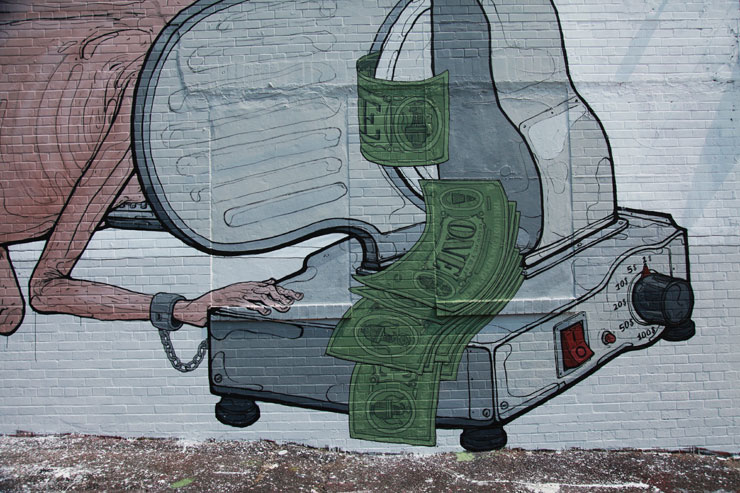 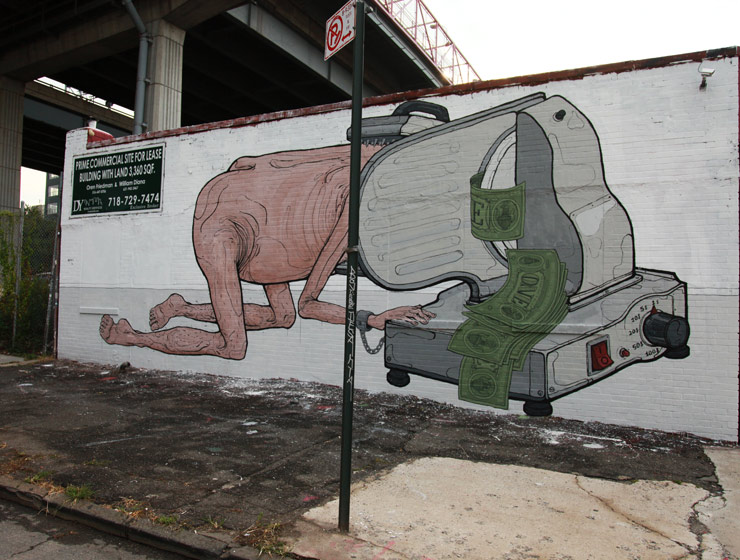 BSA Images Of The Week: 01.10.16
You did it! First week of 2016 DONE! Congratulations sis we still have a few blocks to go. Exciting new gallery shows already this weekend with Esteban Del Valle in LA and Dalek / Interezni Kazki ...
Kashink Uses Hairy Four-Eyed Men to Examine Gender Assumptions
The international Street Art scene boasts a small percentage of women artists and KASHINK may perplex even that statistic with her mustache. It’s the same mustache you’ll see on many of her big hairy ...
Giacomo RUN x Basik Wrestle with the Renaissance and Modern Economics in Florence
The Church of Santa Maria Novella, The Opera del Duomo Museum, the Uffizi Gallery. Florence is forever tied to Renaissance art history and shares its cultural riches with the world daily, including a...
BSA Film Friday: 02.16.18
Our weekly focus on the moving image and art in the streets. And other oddities. Now screening : 1. "The Clown" Harmen De Hoop 2. Artist's Artist: The Process of Gary Lichtenstein 3. FinDAC: "...
Mother Nature At Top of Her Game on the Street
What’s the name of the original Street Artist? That’s right brothers and sisters, it is Mother Nature. While we all are stumbling and climbing on the streets now, digging out of a snow storm for the r...
Brooklyn Brooklyn Street Art Jaime Rojo NemO'S NYC Steven P. Harrington