“Public, Urban, Street, Unauthorized, Permissioned, Private, Graffiti, Vandalism, Fine Art, Installation, Throwie, Portraiture, Poetry, Sticker, Sculpture, Aerosol, Line Drawing, Wheat paste, Yes. All of it applies and all of it is part of a large conversation that has been happening in New York for about 50 years, probably before that. The intersection of art and the street is by nature open to the interaction of every person. At its core is an expression that is human, and the reactions to it are likewise. ” – Steven P. Harrington and Jaime Rojo in PANTHEON: A history of art from the streets of NYC 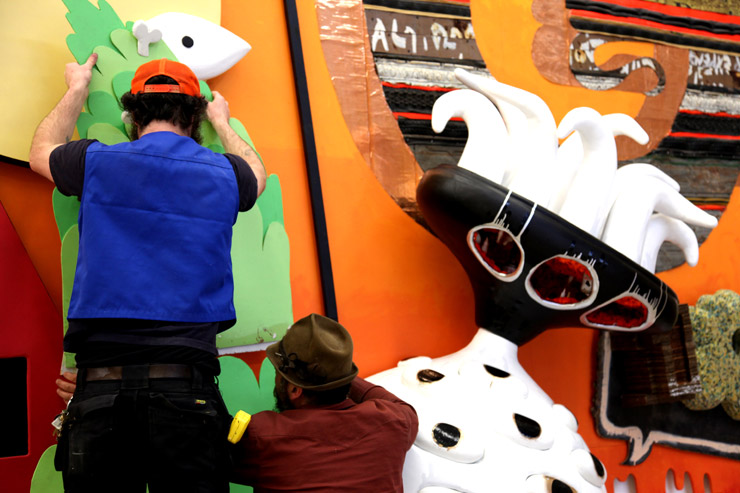 When the erudite artist and alchemist Daniel Feral first talked enthusiastically in the summer of ’10 about his plans to mount a tribute to NYC graffiti and Street Art across the street from the Museum of Modern Art (MoMA) in ’11, we surveyed the large display windows of the former Donnell Library with their grand sweep on 53rd Street in Manhattan, and thought, “Why the Hell not?” As months rolled by and we continued to communicate with Feral and co-curator Joyce Manalo, the once medium sized exhibition grew larger in depth and scope – each time.

Truly a grassroots effort that was free of institutional or corporate restrictions, the PANTHEON show was funded by a modest Kickstarter campaign and administered under a non-profit. Each role and skillset was donated, as was all the labor – freely given by people involved in the scene. When the windows were unveiled in April of 2011 to the thousands of daily passersby, their Pantheon dream had grown into a full fledged installation of historic and current NYC graffiti and Street Artists, a 426 page tome of academic quality and behind the scenes insights, and the new iconic “Feral Diagram” that was quickly snapped up for display and sale at the historic “Art in the Streets” show in Los Angeles. 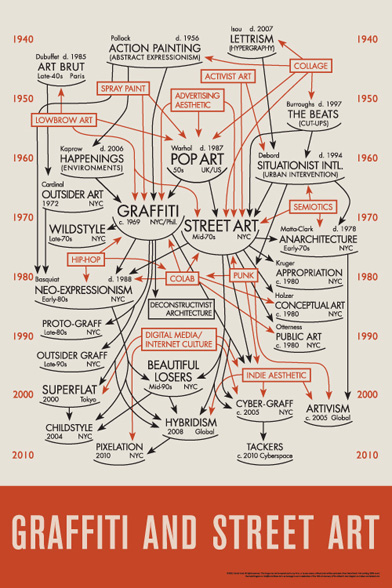 PANTHEON, the book, was one of three published works that BSA was honored to write for and provide images for in 2011. In the process of building PANTHEON, the exhibit, many new ideas and relationships were born, and like it’s muse – graffiti and all it’s cousins, it continues to organically grow in influence in New York and around the world. As 2012 begins, Daniel and Joyce are beginning a publishing and curatorial company, Pantheon Projects. Together in 2011 the artists, writers, historians, academics, curators, and photographers in PANTHEON told a story about an organic movement over time, helping us to understand this moment. 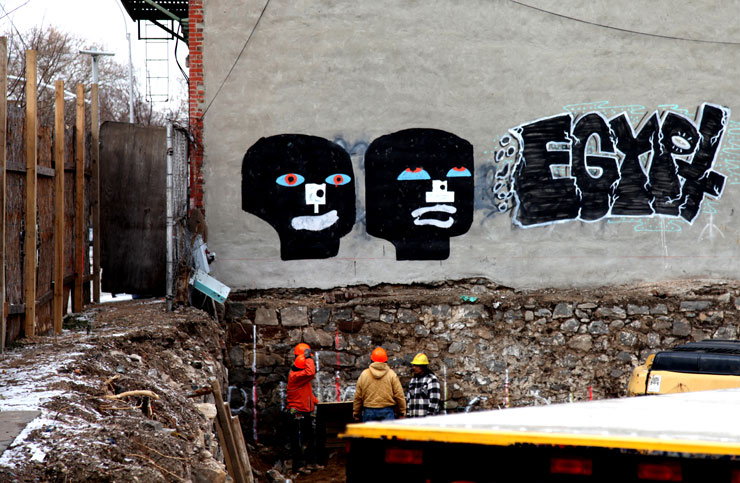 For our part, BSA furnished a chapter in the book about the first explosive decade of Street Art in the 2000s in neighborhoods where it was most impressive and untamed, especially Brooklyn. “PANTHEON: A history of art from the streets of NYC” allowed us to put in context the importance of the public sphere and how people create in it, whether commissioned, approved, or otherwise.

“Brooklyn Street Art (BSA) has been watching, recording, curating, interviewing, and interacting with this scene and its many players and passing on what we’ve learned to readers on our blog, which now number into the thousands daily. As experts in a field of many experts and opinion makers and fans, we like to assess and synthesize the messages and movements among the madness that is the “Street Art Scene”.  As artists and creative professionals in New York for 25 years, the primary draw for us is the creative spirit that is alive and well on the streets and its fascinating ability to continuously recreate itself without the dictate of any one overriding legislative body. This organic growth of art on the street is like seeing Spring eternally. It didn’t ask anyone for permission, and it defines itself. Un-bought and un-bossed, this is a truly free movement born of the people. Not that we are overly romantic about it, mind you.” 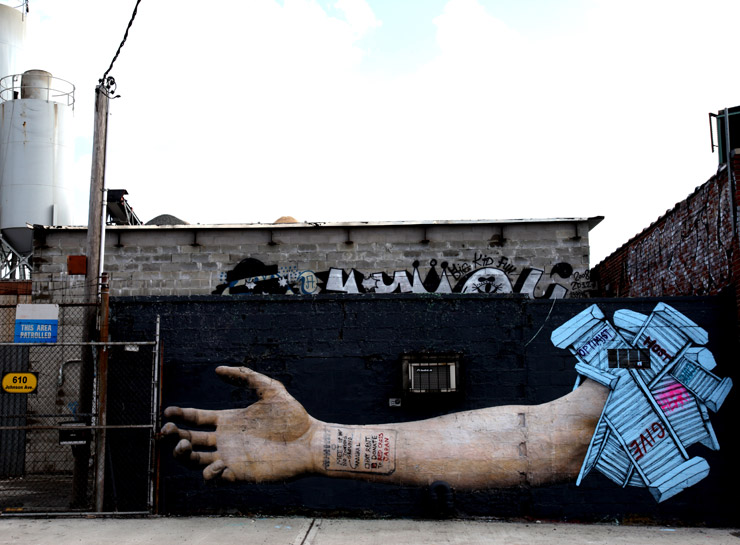 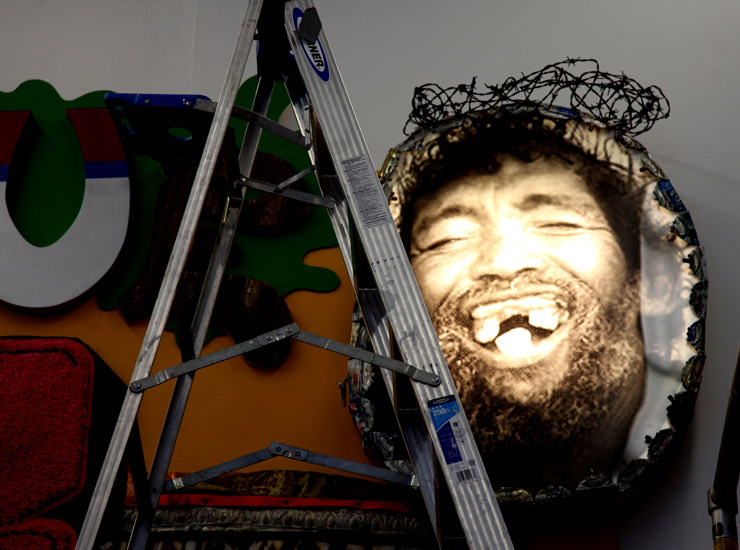 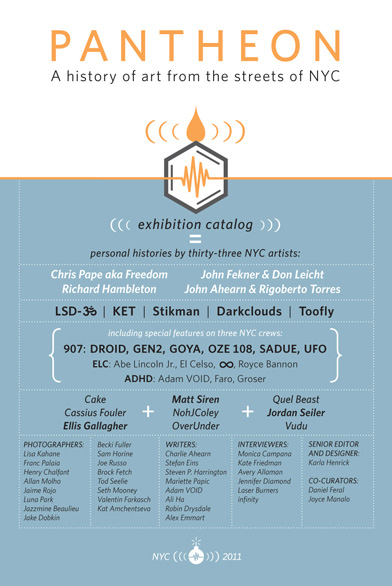 The 426-page catalog is a hybrid of scholarly journal, popular magazine, and graff zine. 33 artists from the 1970s through today tell their own histories, in their own words and pictures, while local writers and photographers give an overview of the cultural milieu. The catalog includes a dedication to Rammellzee by Charlie Ahearn, essay on the Feral Diagram by Daniel Feral, Street Art in the 2000s by Steven P. Harrington with photographs by Jaime Rojo, in addition to 20 essays, 20 interviews and over 400 images from the efforts of over 30 individuals.

US Election Day 2020, Trump v. Biden, and Politics on the Street
Street art in the last five years has been lit on fire with politically themed illustrations, installations, slogans, opinions, and insights that implore passersby to take action and to be engaged in...
Judith Supine Stars in MANLBDRO: The Cowboy Series
A quick shout out to the new collaged gender fuckery Judith Supine uses that openly plays with the man. The Marlboro man that is; the ubiquitous cowboy that appeared in advertisements for thirty-five...
Selina Miles Captures Bordallo II, FinDac, Millo and Case Maclaim at ONO'U 2019
There are times when an artist needs to be completely obvious to get their message out into the world, and Bordalo II is setting the tone for this year’s unofficial ONO’U festival in the gorgeous nat...
MTO and “The Wynwood Family”
Street Artist and muralist MTO spent the entire month of December in Miami. Sounds terrible right? The photo realistic painter also brought his family – or maybe you would say he left them. “The whol...
ROA Paints a Memorial Tribute in BK : "Pet Bird RIP"
"I could paint a regular parakeet - something pretty - but that's not me and anyway Peter would f*cking like this!" says Belgian Street Artist ROA as he talks about his newest gift from the natural wo...
Abe Lincoln Jr. Adam VOID Cake Cassius Fouler Charlie Ahearn Daniel Feral Dark Clouds Droid El Celso Ellis Gallagher Faro Freedom Gen2 Goya graffiti GROSER Infinity Jaime Rojo John Ahearn and Rigoberto Torres John Fekner and Don Leicht Jordan Seiler Joyce Manalo KET LSD-Om Matt Siren NohJColey OverUnder OZE 108 Pantheon QuelBeast Rammellzee Richard Hambleton Royce Bannon Sadue Steven P. Harrington Stikman Street Art Toofly UFO VUDU