On the Navajo Reservation the built environment tends more toward the horizontal than say, Manhattan.  The similarity is that the man made structures for both are constructed on soil first belonging to the proud tribes of people we now call “Native Americans”. 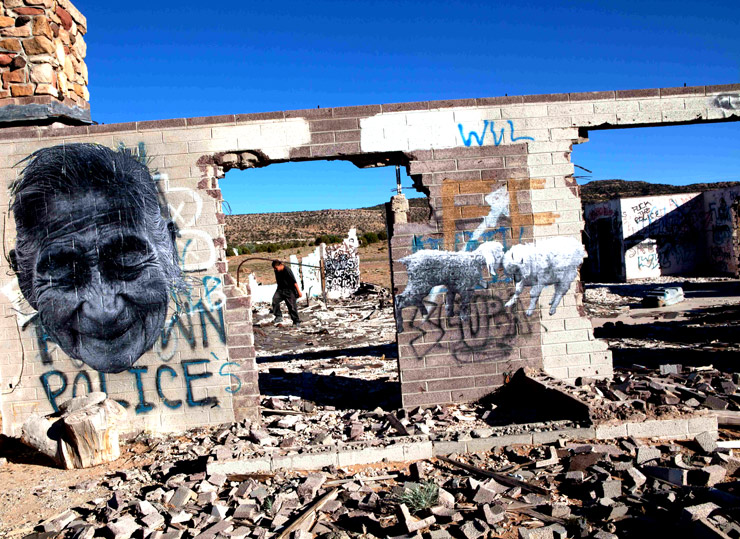 Mary Reese, by Jetsonorama (photo © courtesy of the artist)

Arizona based Street Artist Jetsonorama calls the Navajo Rez home and it is here where he plans most of his installations of wheat-pastes.  The flat lands and sun parched structures, sometimes crumbling back into the dust, provide a suitable open-air gallery for his photos.  The images are not somber, rather they are pulsing with life and possessing some urgency as if to remind you that these places are very alive and life stories are unfolding here.

These recent pieces are at the Cow Springs Trading Post. Judging from the scene, not much trading takes place there nowadays but Jetsonorama enlists its walls one more time to display the inhabitants of the area. 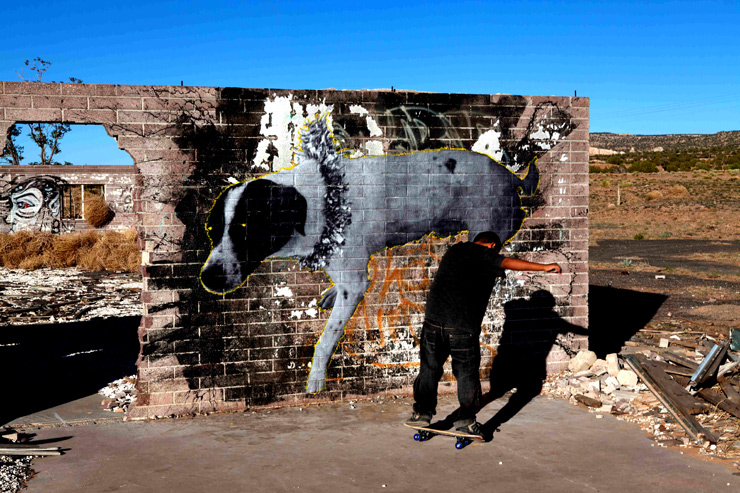 “Deshaun”, Jetsonorama.  (photo © courtesy of the artist). “While installing at cow springs, we met a local youth named Deshaun.  His skateboard broke while he was showing us a trick.  We’re going to get him another one but he doesn’t know that yet.  Thanks for the love Deshaun” Jetsonorama

Bryson with his nephew Owen. Jetsonorama (photo © courtesy of the artist)

Belgian Street Artist ROA visited Mexico in January (see “ROA’s Magic Naturalism”) and now we have a video of his large installation in Mexico City. Whether in the detritus of the big metropolis or the bucolic country landscape, his unique and now iconic images of dead and alive animals rendered in perfect monochrome palette are never out of tune with their surroundings. Perhaps one key element in achieving this sense of context is ROA’s insistence on using as subjects the animals native to the land where he is painting.

ROA was invited by the art promoter MAMUTT ARTE in collaboration with the Antique Toy Museum Mexico (MUJAM). In the country for 3 weeks, ROA left  about 15 murals in various locations like Mexico City, Guanajuato and Puebla and also collaborated with Mexican artists Saner & Sego.

Giulio Vesprini Hits the Court in Italy
“L A N D S C A P E / Struttura G051” Giulio Vesprini. “L A N D S C A P E” / Struttura G051. Monte Urano, Italy. April 2021. (photo © Alessio Bracalente) So many basketball courts have been used...
Pop Culture at Citric Festival in Torreblanca, Spain
Celebrity, photorealism, illustration, fantasy, spectacle. These have always been part of popular art culture and have had an increasingly strong representation in Street Art culture, particularly in ...
Shepard Fairey: "Covert To Overt" Book and Show in London
“How exactly does one become an authority on questioning authority?” we asked in our 2011 interview with Shepard Fairey called “Too “Street” For Corporate, Too Corporate For The Street”. Even though h...
Hyland Mather. Street Assemblage and his Scupture at Artmossphere 2018, Moscow
BSA is in Moscow as curators of 50+ international artists in the Artmossphere Biennale 2018 for its 3rd edition called Street Art Wave. Till the end of the month we’ll working with a stellar cross s...
LMNOPI, Native Peoples, Climate Change, and NYC Streets
November has been "Native American Heritage Month" since 1990 and ironically the growing right-wing extremism of the intervening decades appears to have further erased our collective knowledge of nat...
Antique Toy Museum Mexico (MUJAM) Arizona Brooklyn Street Art Guanajuato Jaime Rojo Jetsonorama MAMUTT Arte Mexico Mexico City Navajo Reservation Puebla Roa Saner Sego Steven P. Harrington USA