Street Artist and burly bear Veng came out of hibernation this spring with a roaring hunger for walls and so far he’s foraged plenty of them in BKLN. From the breezy shores of La Isla Conejo to the rusty thickets of Bushwick, the borough of Brooklyn has a few hundred feet more of aerosol paint since this guy poked his head out of the cave during the thaw. 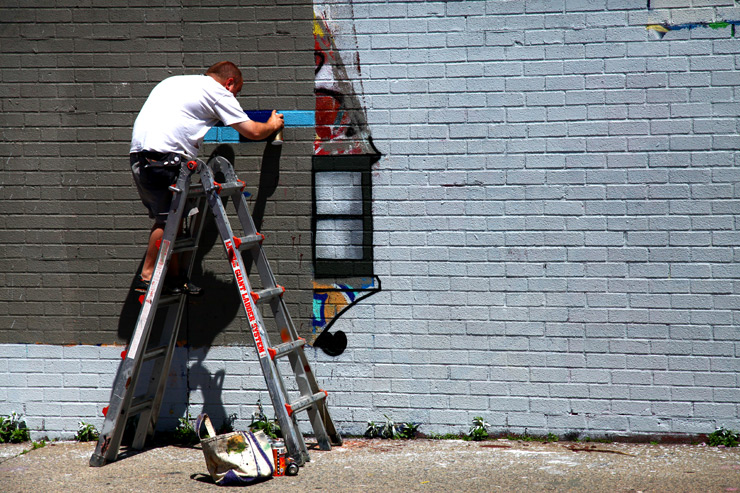 Just this week we found him placidly smacking his choppers and savoring the last taste of lunch while sitting on a sidewalk and surveying the sweeping Veng Vista across the street; almost one entire block length wall that he’s completing this weekend for the big Bushwick Open Studios 2011.

Now in it’s 5th year and produced by the volunteer army Arts in Bushwick, the studios and streets are fair game for visitors and artists of all stripes and abilities. Each year it is entertaining and educational to witness who’s moved on, who’s still hanging on, and who’s just arrived to claim credit for it all. Veng is one of the hangers-on; in fact one of the starter-uppers when it comes to Street Art here.

As we reported yesterday, Factory Fresh Gallery has two entries in this year’s festival, a veritable double bill of Indoor and Outdoor. Inside the gallery is “Surrealism,” perhaps in honor of the British-born Mexican Surrealist Master Leonora Carrington who passed away May 25th or perhaps to acknowledge Surrealism’s many currents running through pop culture and street culture today. 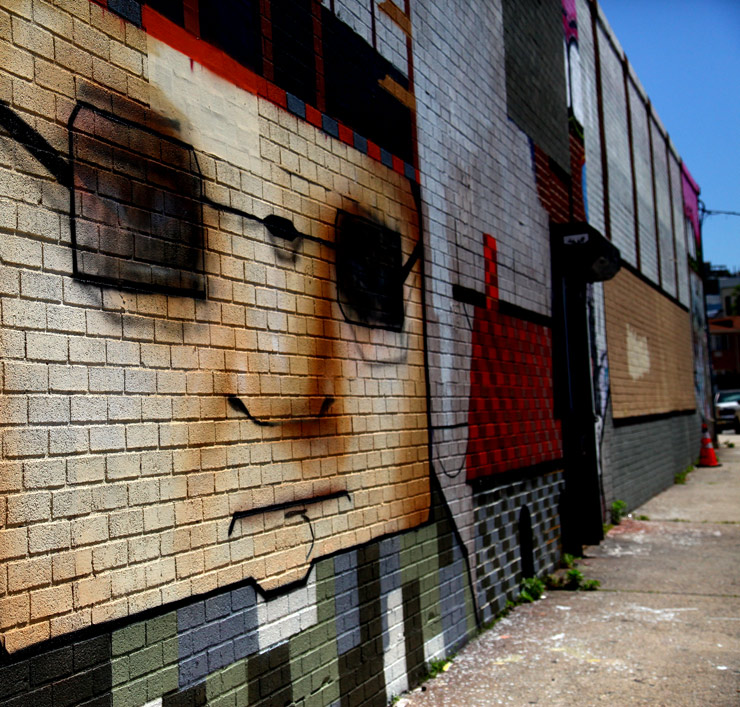 The Outside portion showcases the “Bushwick Art Park”, FF’s entry to the New Museum’s Festival of Ideas, which proposes to build an art park on this very block of Vandevoort Place where Veng is painting. No stranger to surrealism himself, Veng often depicts his characters in other-worldly portraits with birds as hats and hats as boats and intricately detailed scenes nested within scenes.

These process shots from Thursday show him trampling along on the immense wall and by Friday he told us he’d be done. You’ll need to check this one yourself to verify. While bears can move fast sometimes, they also tend to favor long naps. 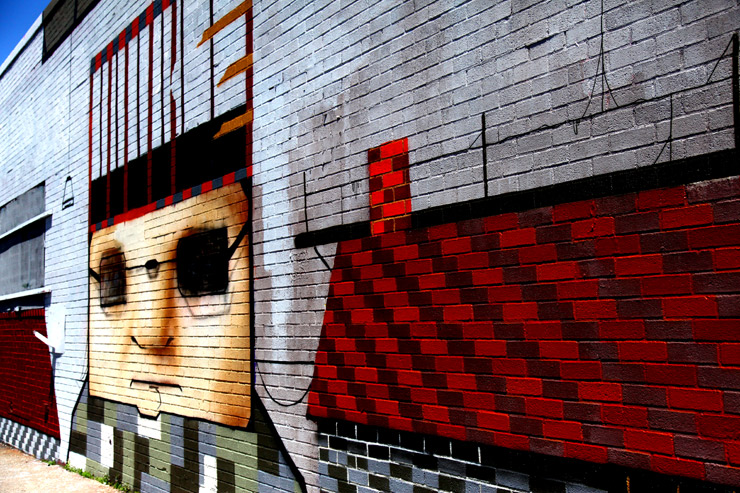 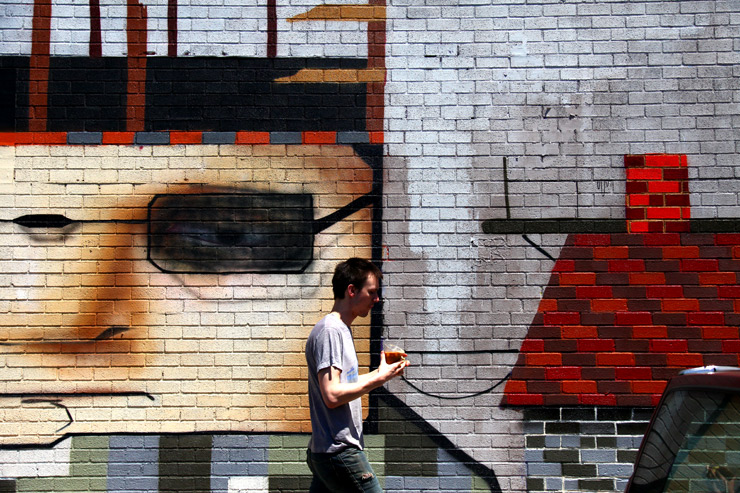 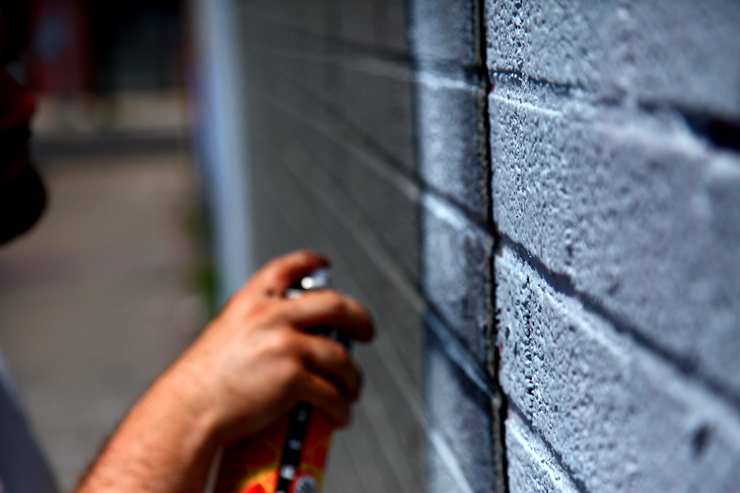 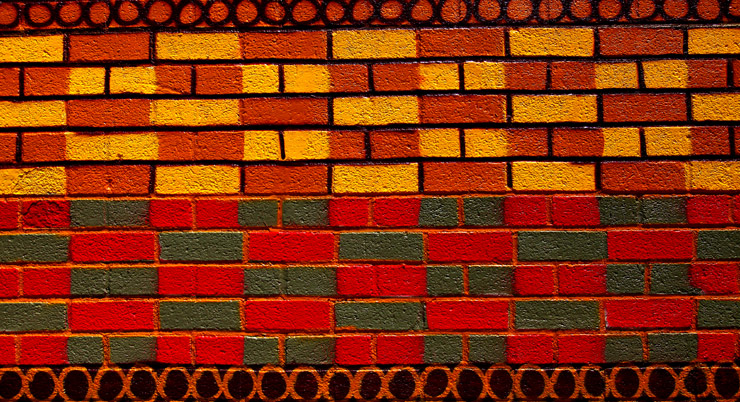 Veng (photo © Jaime Rojo). Brick walls make Veng very happy as he loves this pattern and the demarcation of the bricks makes his job a lot easier.  He was beaming with joy. 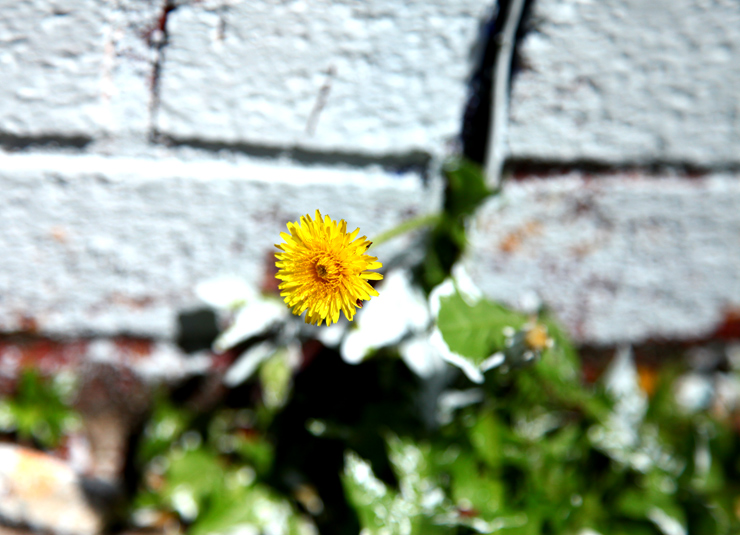 Ah Summer: At the base of Veng’s ladder this dandelion stood sunny and willful amidst the aerosol fumes and drips and the trash (photo © Jaime Rojo) 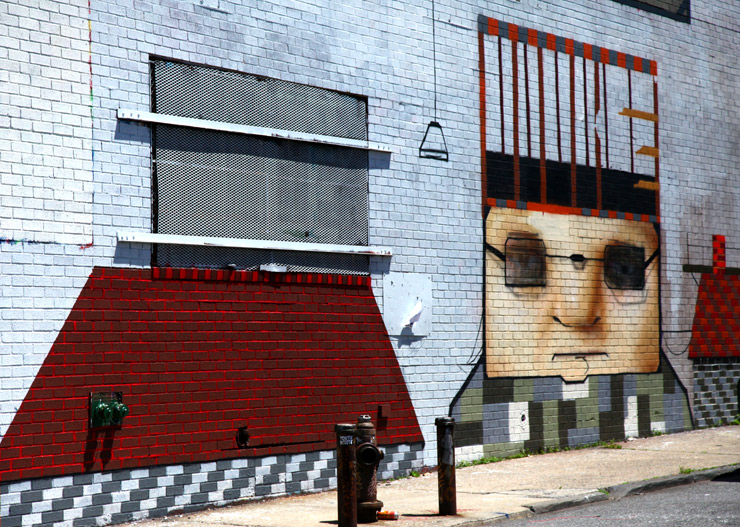 To learn more about Factory Fresh “Surrealism” Show click below:

To learn more about “Bushwick Art Park” click below:

For a complete and detailed listing of all the events taking place at BOS2011 click below:

Poles in Italy: Natalia Rak and Etam Cru at Memorie Urbane 2014
The Polish duo Sainer and Betz, who together are named ETAM CRU, have just completed walls at Memorie Urbane along with their countrywoman Natalia Rak, who comes from Lodz.  Together the illustratio...
Photos of 2020 : #12 : 907 Crew says, "Mask Up" !
Happy Holidays to all BSA readers, your family and dear ones. We're counting down some of our favorite photos to appear on BSA in 2020 taken by our editor of photography, Jaime Rojo. We wish each per...
Udane Paints Light and Color, A Guy and His Backpack, for Contorno Urbano
Udane Juaristi (Udatxo) A painter. On the street. Capturing the figure with brush in hand, obligating the gaze, summoning the flesh and texture from the public space, making it personal and private. ...
Icelandic Murals, Northern Lights, "Wall Poetry 2016" in Reykjavik
The concept album was born in the Stoned Age when TV was black and white, back when disaffected teens had to trudge for blocks and blocks outside on the sidewalk to the record store and carry their ro...
Street Artist Olek Goes To Jail in Poland
Street Artist Olek went to jail this week. We’re pleased to report that she made quick friends and crocheted a 65 foot long wall hanging. “Pocaluj Przyszlosc” (Kiss the Future) is inscribed in a hand...
Arts in Bushwick Brooklyn Brooklyn Street Art Bushwick Art Park Bushwick Open Studios 2011 Facory Fresh Jaime Rojo Leonora Carrington NYC Steven P. Harrington Surrealism VENG