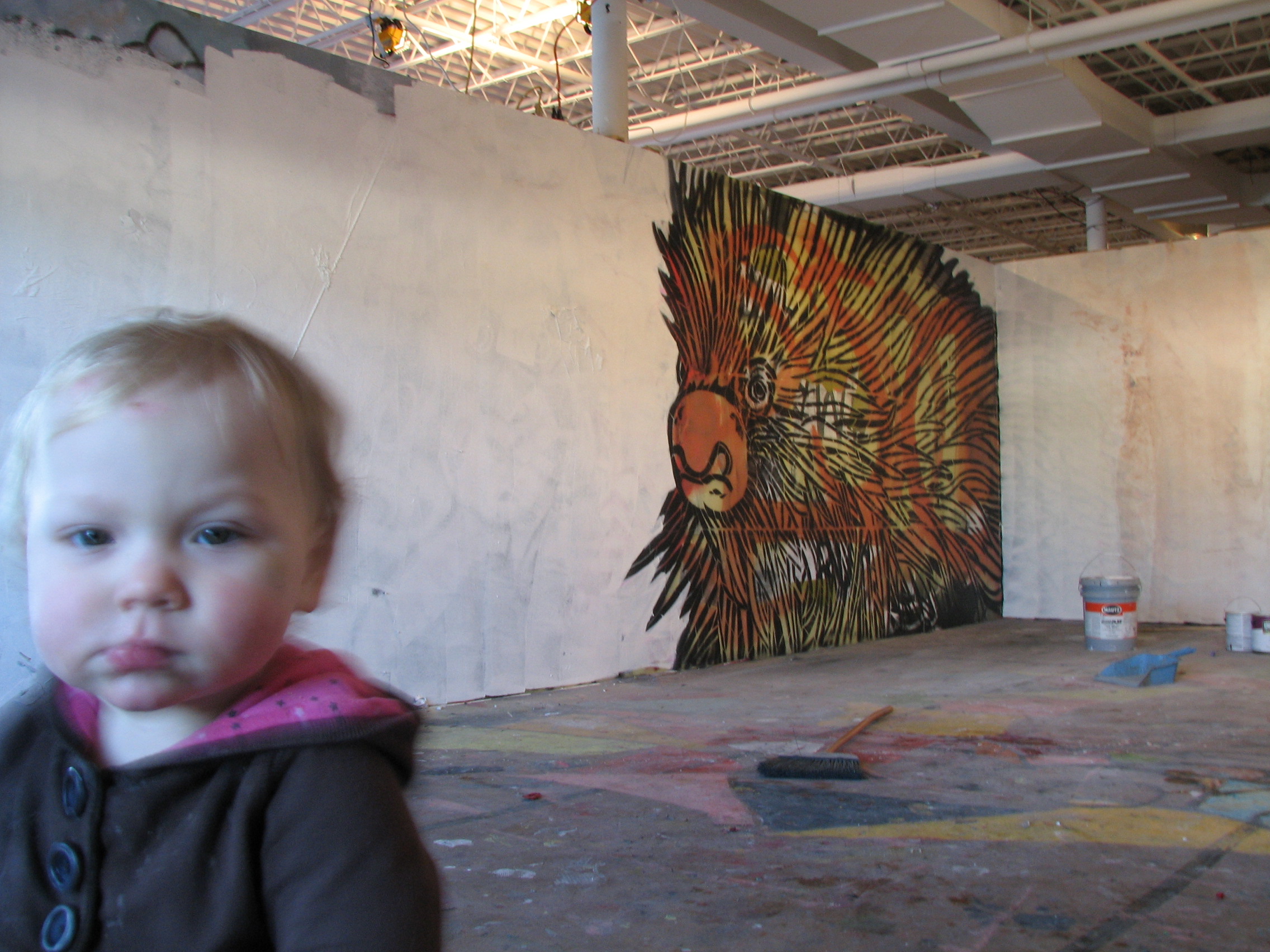 If you’ve tooled around the northside of BK recently you probably saw a giant porcupine and bear up there. Yes, Broken Crow was in town to participate in two art shows and put up three walls before heading on back to Minneapolis, where they participated in a 24 hour art creating event and painted a gigundo mural on the entire side of a building, with their bud Over Under.

So to recap – They drove from Minn. to Brooklyn in a beat-up loaner van, installed work in 2 art shows, painted 2 murals in Brooklyn, 1 in Manhattan, then drove the van all the way back to Minn. and painted 2 more murals… in 3 weeks. Kind of blows that stereotype about lazy shiftless artists, huh? Now they are exhausted, famished, delirious, and waaayyyy creatively satisfied. John and Mike reflect on jobs well done;

Brooklyn Street Art: You guys have been really busy for the last 21 days! How did the two shows go?

John: The two shows were great, as far as I can tell. I was happy with what we painted, and we got some good feedback, I think that’s the best you can ask for.
Mike: I had lots of fun at the shows. It was great to meet so many talented, and like-minded people.

Brooklyn Street Art: What else have you been up to?

John: Last week we painted two murals in Brooklyn and one in Manhattan, this week we’re back home in Minnesota we did a 3 hour slot in a 24 hour art-making marathon working with teenagers, and we’re also painting a 20×80 foot wall. Who knows what we’ll be doing next week..
Mike: We want to paint it all, but it is nice to be home and have a balance between art and family.

Brooklyn Street Art: How do you guys lay out a plan for the piece in Williamsburg?

Mike: We try to plan, but mostly our plans don’t work out. We usually just start with something that we want to paint. The creative problem solving happens while we are living in the painting.
John: There’s a lot of guesstimating going on, and then usually someone says something like “what do we have that will fit?”, and then the next thing you know, you’re stepping back from it and it’s done.

Brooklyn Street Art: Did you bring all your supplies to Brooklyn or did you have to make preparations once you got here?

John: We brought paint with us, but we spent 2 days cutting stencils while it was raining cats and dogs outside. It was actually a blessing in disguise, the rain, because if it had been nice out, the last thing we would have wanted to do was sit inside cutting holes in stuff.
Mike: While everything might be more expensive in New York, bringing your own supplies comes with the price of 38 hours in drive time.

Brooklyn Street Art: John’s angel boy character can see into the future. What about the porcupine dude?

Brooklyn Street Art: Are you optimists?

John: We are opportunivores.
Mike: Yes.

Brooklyn Street Art: Are those airplanes flying out of the bears’ mouth, Mike?

Mike: They are paper airplanes. Over Under makes them. He loves origami and windsocks.
John: Over Under loves puppies and unicorns. And machine guns.

Brooklyn Street Art: If these animal buddies were talking, what would they be saying to each other?

John: It’s sort of like the scene in Green Mile where the bees start flying out of Michael Clark Duncan’s mouth when he’s on healing people..
Mike: The bear is saying “Move or I will projectile vomit in your face!” The porcupine is thinking”Not again. It will take me forever to pick this sh*t out of my quills.”

BSA Images Of The Week: 03.27.16
Happy Easter to the folks who are celebrating this day of Christ's rise from the dead. The rest of ya'll can just enjoy the Sunday roast dinner we made for you. Cousin Charlemagne has already eate...
BSA Film Friday: 04.15.22
Our weekly focus on the moving image and art in the streets. And other oddities. Now screening:1. Dyva & Haeck painting on the Molotow train.2. THIS IS INDECLINE: A Showreel3. Edoardo Tres...
Pichi & Avo & Goddess Athena in Barcelona
Bringing their unique blend of old-world European white classical sculpture and the bright side of modern urban vandalism to Barcelona, the artistic duo PichiAvo paints the Greek goddess Athena engul...
Mexico City: Aerosol Artists, Aztecs and Magic on the Street
Every city has its own particular energy; it’s own articulated rhythm, its own unique chaos. Mexico City's is full of flourish and aspiration and fascination for the international new, while firmly r...
Adele Renault: Paints a Stinging Nettle in Sweden
Stinging nettle (Urtica dioica) is a staple in herbal medicine and has been since ancient times. Egyptians used stinging nettle to treat arthritis and lower back pain, while Roman troops rubbed it on...
Broken Crow Jaime Rojo Over Under