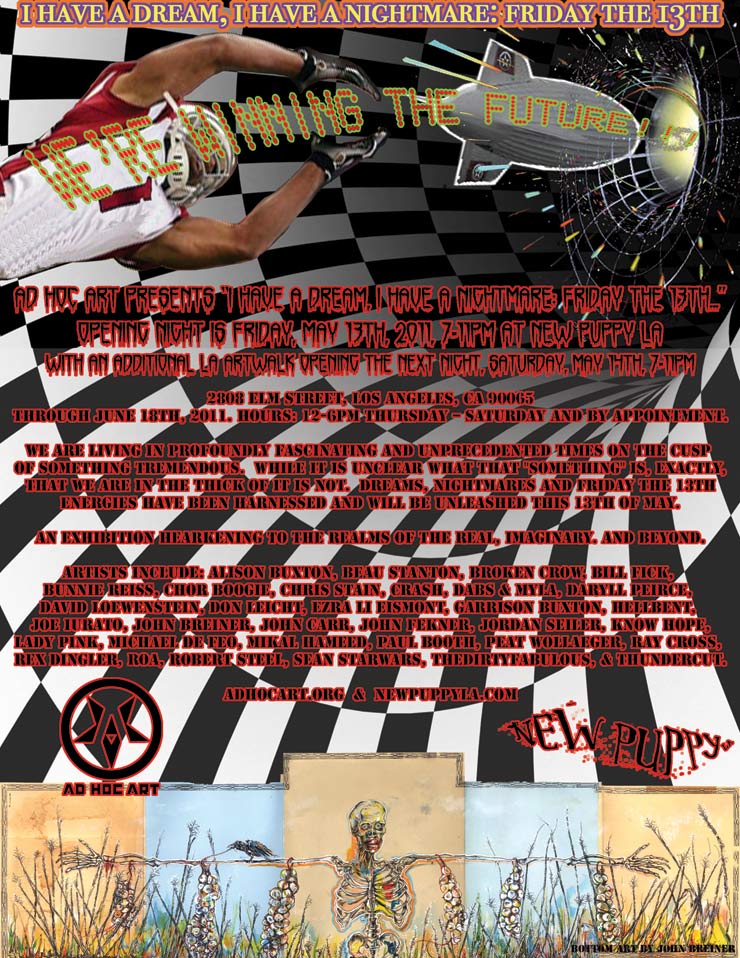 — An Art Exhibit Celebrating the Expansiveness of Consciousness & Culture —

with an additional Artwalk Opening: Saturday, May 14th, 7-11pm

WHAT:            AD HOC ART presents “I have a dream, I have a nightmare: Friday the 13th”, an eclectic and electric charge of vast creativity, synapses, and neural networks seeping into Los Angeles’ artmind via New Puppy LA.

That we are living in very fascinating and unprecedented times on the cusp of something is crystal clear.   What that “something” is, exactly, is not.  What waits on the other side?  Is it beautiful or horrendous, sustainable or cataclysmic, truthful or deceptive, just or fraudulent?  We all play a leading role in guiding the future of this sweet unraveling already well underway.

Around the world, energies are coming together, people are relating, and the future is so bright.  Is the light from the billions of shining smiles of a humane and democratic existence that sustains life; or is it the glistening blast from a bomb dropped by the sociopathic ceo/politico at MegaGlobalBankCorp determined to take all or nothing at our expense?

To divine an answer, dreams, nightmares and Friday the 13th energies have been harnessed, channeled and will be unleashed this 13th of May in the City of Angels.

Enjoy these visual nuggets swimming through the realms of spacetime.