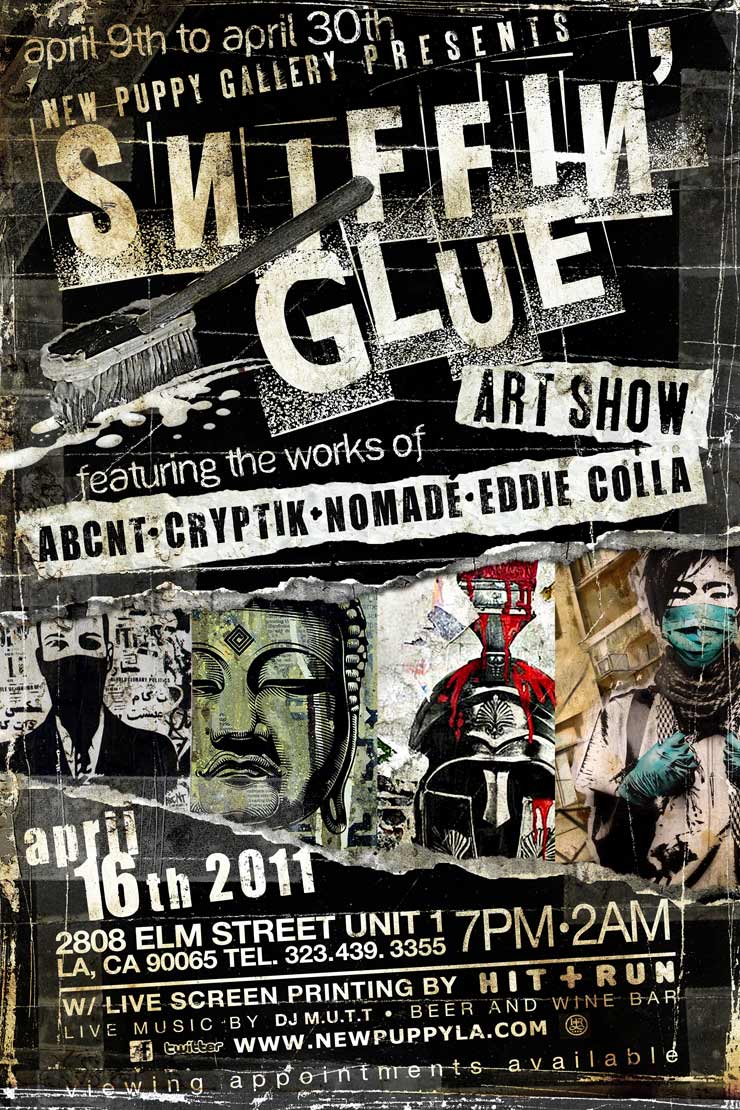 Who better than Nomadé, Eddie Colla, ABCNT, and Cryptik to poke the MOCA institutional bear smack in the nose on April 16th with their new explosive show “Sniffin’ Glue.”

Armed with intense imagery and a collective history of street credibility, this fierce

institutional tank, refusing to allow Jeffery Deitch be the only street

art voice heard on this night.

It is a manifestation of a street art revolution that cannot be ignored.

The themes of their work span from power, peace, individualism to protest.

Fueled by revolution, ABCNT’s work pierces into the heart of our deepest political establishments. Cryptik’s art comes from a place of spirituality and his zen visual mastery.

Nomadé are the warriors of creation, not powered by weapons but by intensity and a powerful visceral style. The world of Eddie Colla captures the consciousness of the individual and the relationship to the ever-growing environmental challenges to conformity.

Etnik Splashes a Watery Icosahedron in Jacksonville, Florida
“If you look on the map, Florida is like Italy, all surrounded by water,” says Etnik as he finishes this new spatial composition of geometrical forms. “Ocean, river, fishes and everything that is in t...
Herakut In Paris With A Message for the Kids About Magic
“Le duo allemand vient de signer sa première fresque à Paris,” says Galerie Mathgoth as they present Herakut and their new mural on rue Goscinny in #Paris13. Herakut. Paris. (photo © courtesy of Ga...
Oakland Murals from Zio Ziegler, Meggs, Ryan Montana and Ernest Doty
Athens seems like its on the brink of disaster but Athen B is having amazing success. With apologies for the lame name comparison today we bring you shots of new grand scale murals in Oakland done as ...
BSA Film Friday: 02.26.21
Our weekly focus on the moving image and art in the streets. And other oddities. Now screening participants at Festival Asalto 2020: 1. Silence Shapes by Filippo Minelli2. Apocalypse Now / IN...
BÄST, New York Original, In Memoriam
His wit is what we’ll miss the most! BÄST took no statement so seriously that he couldn’t satirize it – including ones that came from your mouth. A sweet-faced wiseguy with sartorial style, his illus...
Abcnt Art In The Streets Brooklyn Street Art CA Cryptik Eddie Colla Jeffrey Deitch Los Angeles MOCA New Puppy Gallery Nomade