Street Art can be a very singular activity, and if you desire, you can do your own thing without ever hanging with the crew. Royce Bannon has never been interested in the Lone Wolf approach, preferring to work with friends on projects. In fact, as part of the Endless Love Crew, he brought about the big “Work to Do” show in Soho a couple of years ago with a truckload of mostly New York Street Artists, all working collaboratively to pull off one of the most lively freeze-frames of the current scene, without attitude. 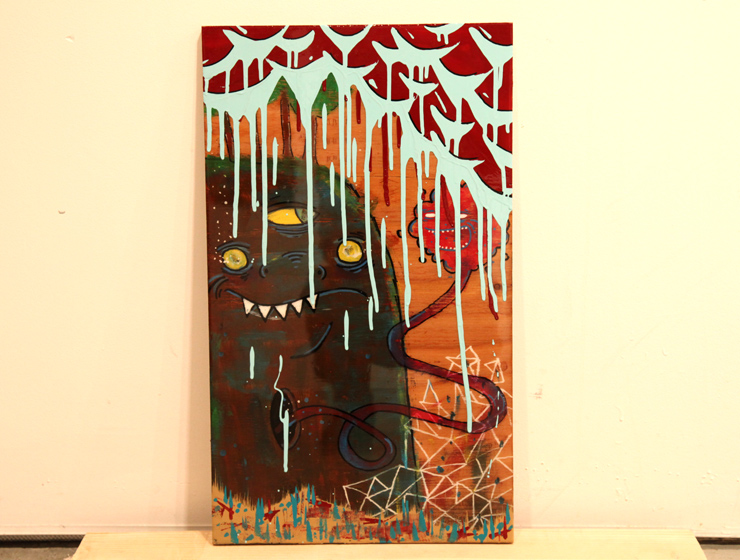 For “Unusual Suspects”, opening Saturday,  the curator and artist invited some of these same artists to this nice open community space in Williamsburg with one important requirement; They all needed to collaborate on a piece with a least one artist in the show.

When asked why he wanted the artists to collaborate he explained that a lot of them work together in many shows but most of them have not painted together on a single piece. In a collaboration you are more cognizant of the working style of the other, and, while not losing your own identity, you are part of a conversation. The resulting work is something entirely different from what either one could have produced solo. The process here involved passing the work back and forth over a period of time with each artist adding his or her contribution. Instructed Royce “Do what you want – just make it look good!” 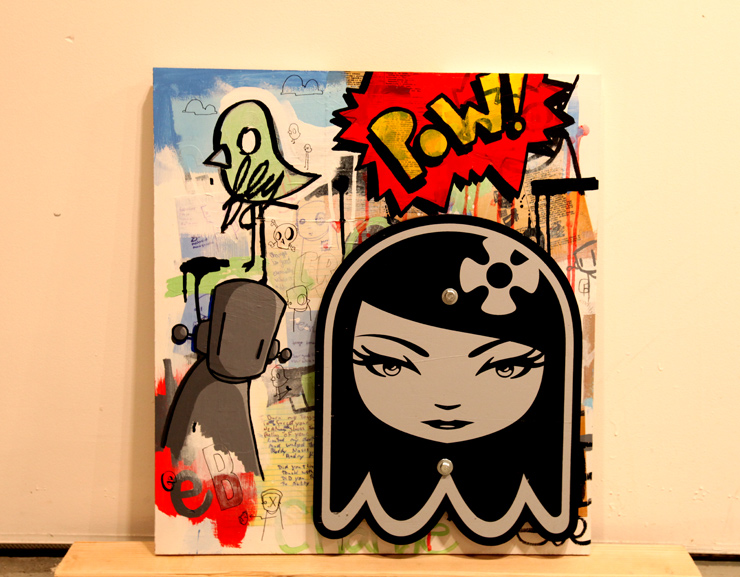 Most of these names are seen on the street and it is always interesting to see how the work translate to the framed pieces on gallery walls. Included in this offering are a number of individual pieces that span a wide range of styles and one can clearly see these Street Artists going forward in their personal explorations. 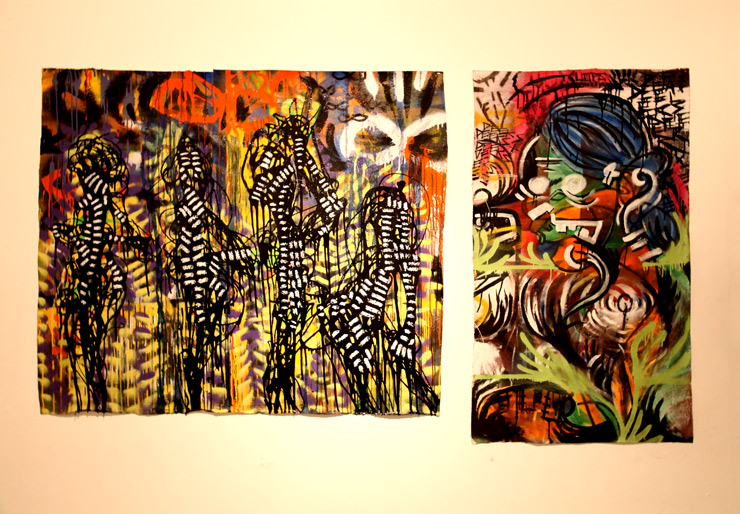 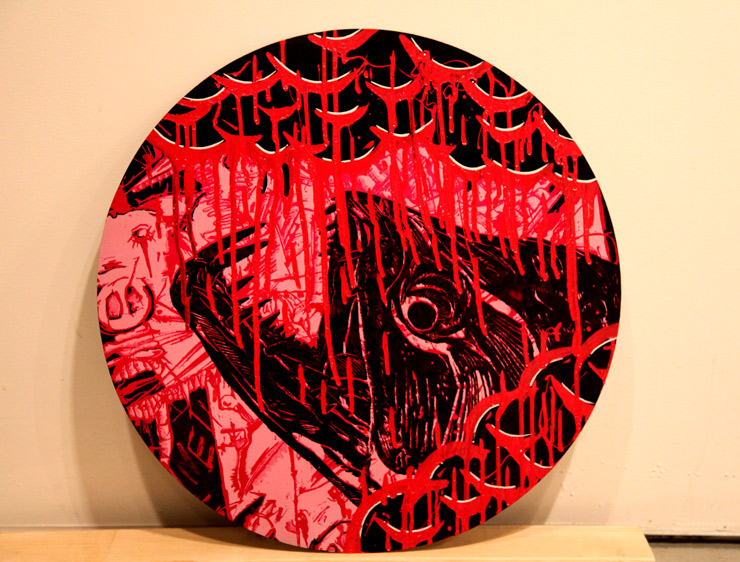 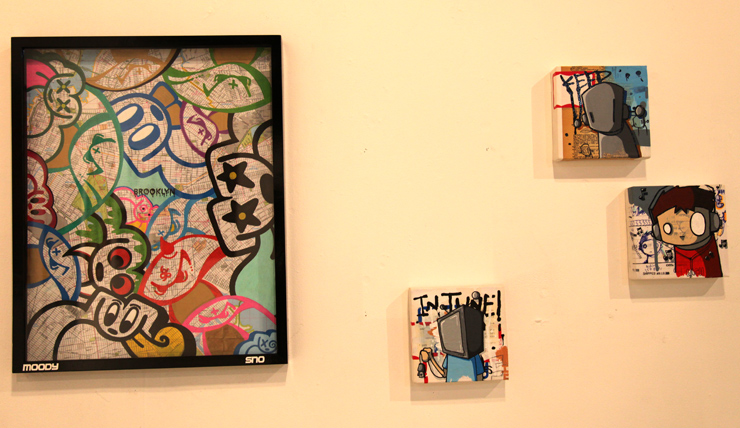 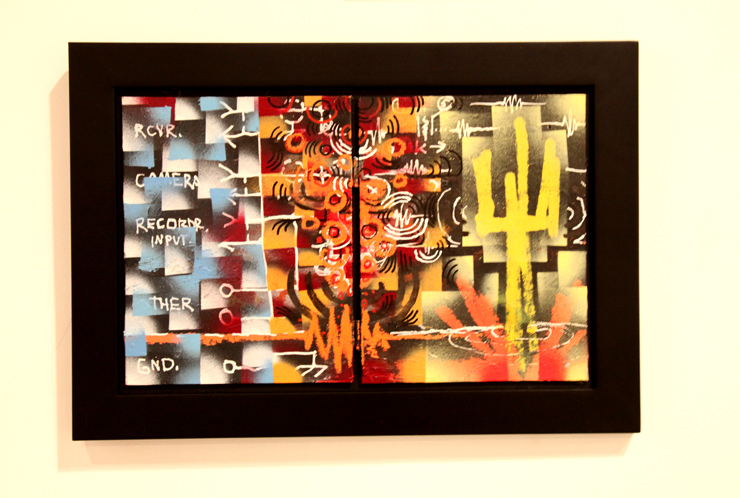 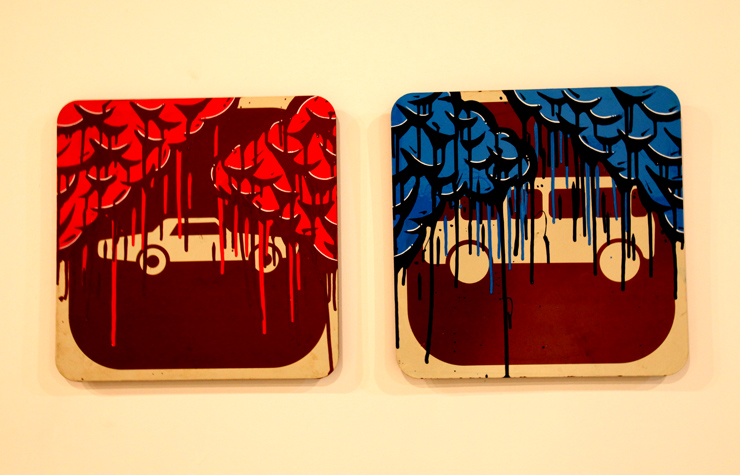 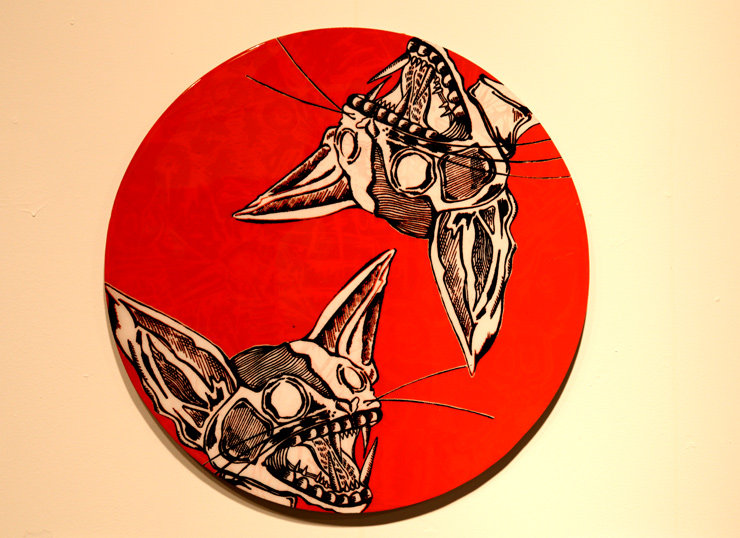 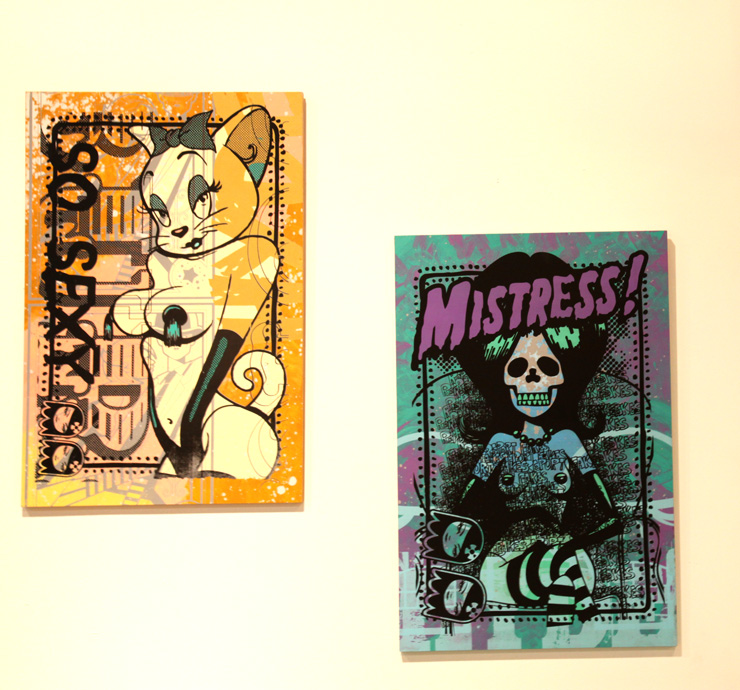 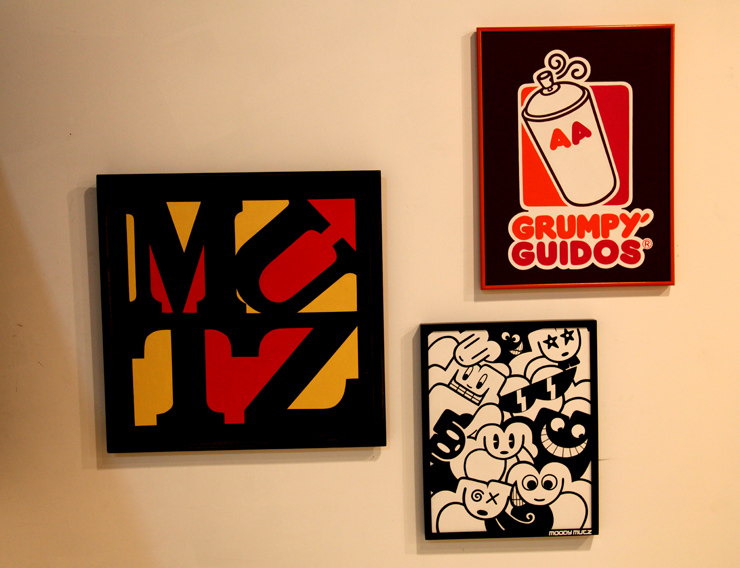 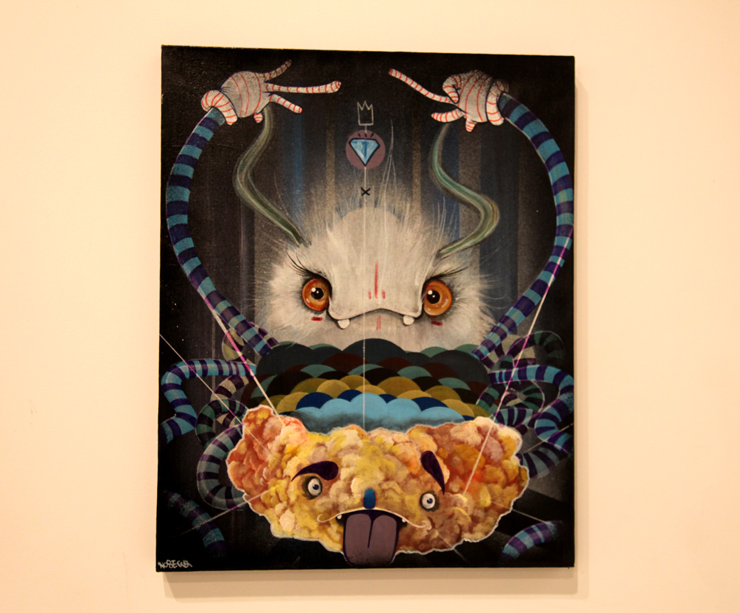 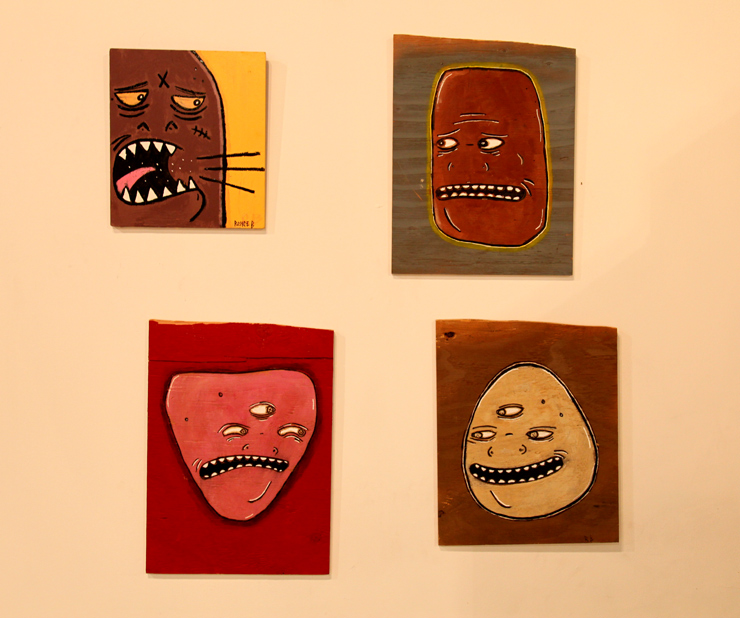 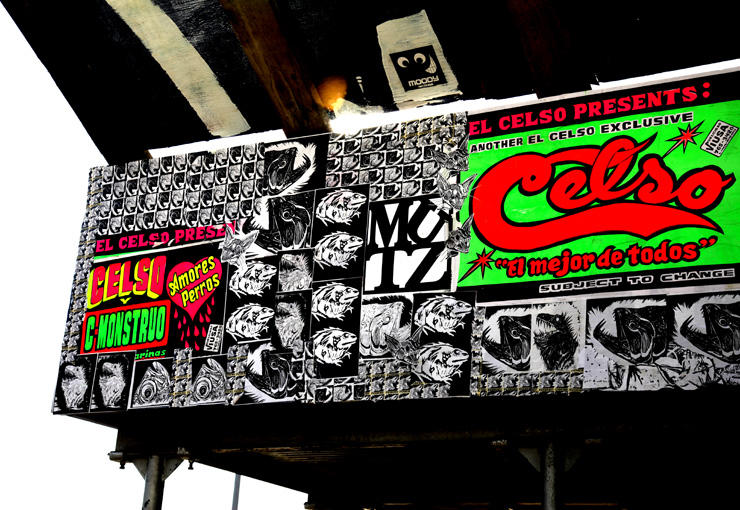 Celso, Keely and Mutz collaborate on the scaffolding outside the gallery (photo © Jaime Rojo) 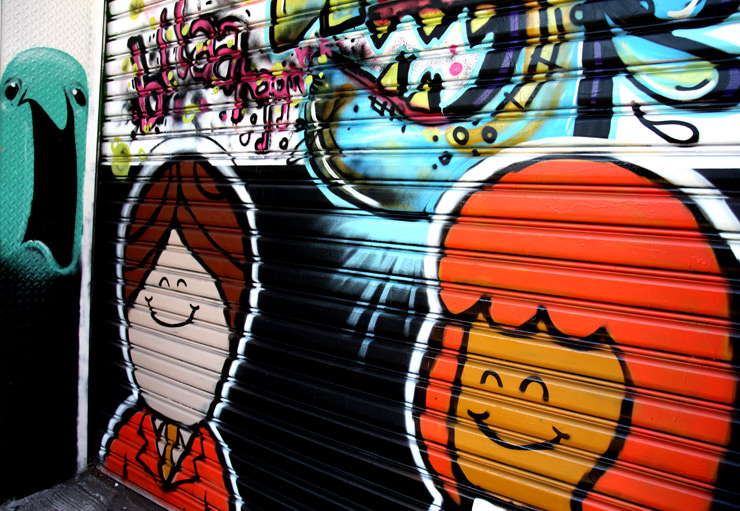 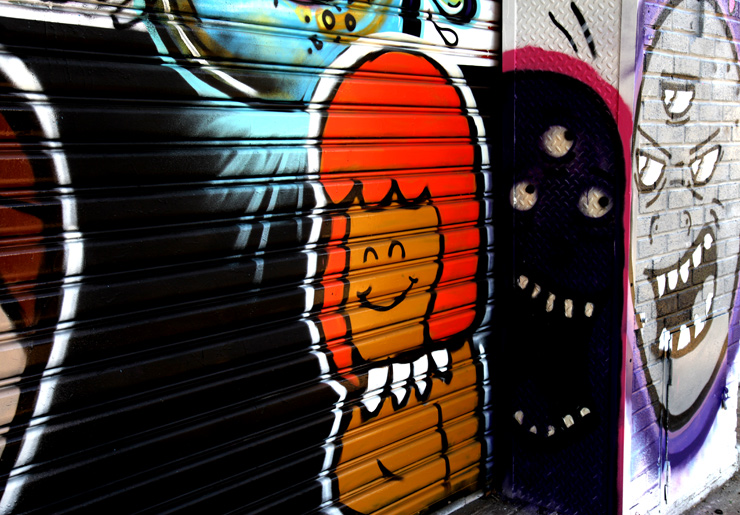 To read more details about “Unusual Suspects” click on the link below:

Swoon "To Accompany Something Invisible"
A good way to familiarize oneself with the additional dimensions that Swoon has taken on since you last caught up with her is the Street Artists show called To Accompany Something Invisible newly exhi...
Borders and Boundaries : A Multi-Disciplinary Exhibit at St. Petersburg's Street Art Museum
Rafael Schacter Takes a More Nuanced Approach to the Migration Crisis Commerce and technology have been eroding traditional constructs of the borders and boundaries, especially in the age of the In...
0907 Pays Homage To 'Hero' Keith Haring And #LGBT Community in Xi’an
Xi’an is a large city of about 7 million, the capital of Shaanxi Province in central China, often called the birthplace of Chinese civilization. It's also been sprouting Street Art in recent years. ...
BSA Images of the Week 03.26.17 : Hong Kong Edition
This week BSA and Urban Nation (UN) are in Hong Kong for the 4th edition of HKwalls to capture a very international and local mix of artists in this East/West nexus; a world-class city for...
BSA Film Friday: 03.05.21
Our weekly focus on the moving image and art in the streets. And other oddities. Now screening participants at Festival Asalto 2020: 1. FAITH XLVIII 410 BC - 340 BC2. Ozmo / "La visión de Ton...
17 Frost Gallery Abe Lincoln Jr. Brooklyn Brooklyn Street Art Celso Chris RWK Dark Clouds Deekers Infinity Jaime Rojo Keely Matt Siren Moody Mutz Nose Go NYC Royce Bannon Sno Steven P. Harrington Stickman