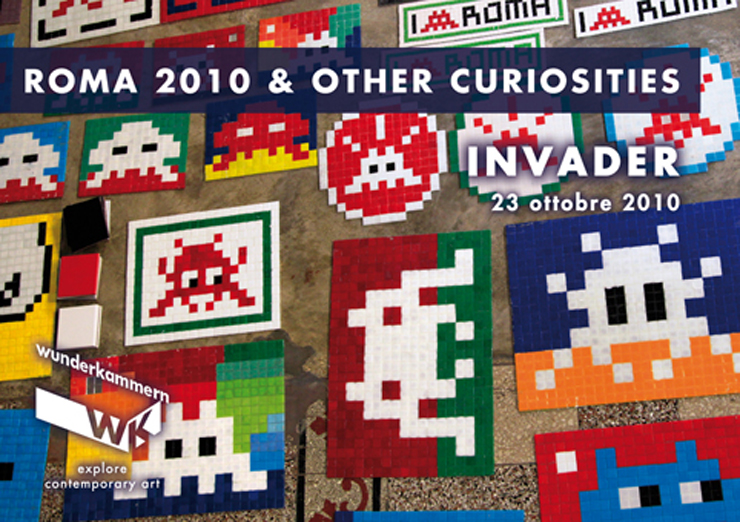 Roma 2010 and other curiosities

From 23rd October to 21st December, Wunderkammern exhibition space will host the first Italian solo show of Invader: “Roma 2010 and other curiosities”.

Invader is an artist working in anonymity. Born in 1969 in Paris, he is one of the most important and original international street artists and has exhibited in many prestigious galleries and museums across the world.

Invader is known above all for his public interventions inspired to the Arcade Game Space Invaders, created in 1978 in Japan. His operations are tied up to creative practices of “interference” through which he traces unique trails in the collective space, shaping new signs in the urban landscape. The naturally public formality of his interventions – suspended between visibility and anonymity and between real and virtual spaces – as well as the choice of icons present in the collective memory and practices of the youngest generations, offers a meaningful and original reading of our cultural patrimony.

With the invasion of Rome occurred over the summer, the artist has finally added the Italian capital in the list of the more than forty cities he has invaded so far: from Katmandu to Bangkok, from small urban centres to great city metropolises such as New York, Hong Kong, Los Angeles and above all Paris.

The exhibition at Wunderkammern will present various aspect of his work: from the alias replicating the space invaders of Roma to works made with his original RubikCubism technique, by means of the coloured modules of the famous puzzle, re-presenting images extrapolated from the realm of art history or popular culture, along with specific installations and curiosities. The invasion guide of Roma and the brand new 19th printed invasion map will also be presented in exclusivity at the opening.

On the occasion of the artist’s presence in the city, Wunderkammern’s exhibition space opens once again to the dialectic comparison between ordinary and extraordinary, by drawing its own poetry closer to Invader’s narrative language. The artist revisits the urban space generating wonder and transforming daily routes into unique journeys.

BSA Images Of The Week: 01.17.21
Here's our weekly interview with the streets, this week featuring Chupa, Elsie the Cowww, Gane, Gemma Gene, Kai, Li-Hill, Mr. Babby, Panic, Peachee Blue, Pork, Skewville, Sydney G. James, and Zex...
Various & Gould Tell a #PublicTale as Scavenger Hunt in Berlin
A new elaborate and inventive public art / scavenger hunt installation in Berlin brings you back inside the combined imaginations of Various & Gould, where you must trust them as they lead you a...
Street Art Sancocho : "ArteSano Project" Brings Dominican Flavor (VIDEO)
New Year, new mural festival!  Truthfully, the appearance of new mural festivals today is faster than annual – it’s more like quarterly – but this one in the Dominican Republic was inaugurated thre...
Pop Culture at Citric Festival in Torreblanca, Spain
Celebrity, photorealism, illustration, fantasy, spectacle. These have always been part of popular art culture and have had an increasingly strong representation in Street Art culture, particularly in ...
OWB2 : Open Walls Baltimore 2 Winding Up (VIDEO)
Two years after Baltimore opened its walls to Street Art, the street artist Gaia has again summoned artists this spring and summer to regale walls with murals throughout the up and coming neighborhood...
Brooklyn Street Art Invader Italy Rome Wunderkammern