BSA is in Berlin this month to present a new show of 12 important Brooklyn Street Artists at the Urban Nation haus as part of Project M/7. PERSONS OF INTEREST brings to our sister city a diverse collection of artists who use many mediums and styles in the street art scene of Brooklyn. By way of tribute to the special relationship that artist communities in both cities have shared for decades, each artist has chosen to create a portrait of a Germany-based cultural influencer from the past or present, highlighting someone who has played a role in inspiring the artist in a meaningful way.
Today we talk to Specter and ask him why he chose his person of interest, Sally Montana.

Specter is multi-disciplinary on the street, including sculptural installations, photography, and hand-painted large-scale one-off wheat pastes. It was the latter practice that first drew us into his personal stories and portraits on the streets in the 2000s, enlarged versions of people you might meet in the neighborhood. There was the guy with a grocery cart full of recyclable bottles, the food delivery dude on a bicycle, the burly homeless gent wrapped in a red blanket.

These are everyday people on the streets of Brooklyn, and Specter elevates them for passersby to stop and consider.

For his PERSON OF INTEREST Specter is painting another Brooklyn artist as a way of honoring the thousands who have made a thriving and buoyant scene in the 1990s-2010s in neighborhoods like Bushwick, Gowanus, BedStuy, Williamsburg, and Greenpoint – similar in many ways to Berlin’s neighborhoods of Kreuzberg, Friedrichshain, Prenzlauer Berg, Schöneberg and Mitte.

To find his portrait subject, Specter just looked next door to his studio. “Sally Montana is my neighbor. She is from Germany but lives in Brooklyn and is a professional photographer and one of the nicest people anyone could ever meet. The reason I choose her is because I feel she embodies this project. The connection between NY and Berlin art communities being the two of the largest in the world and the back-and-forth sharing of people and influences from each others cultures.” 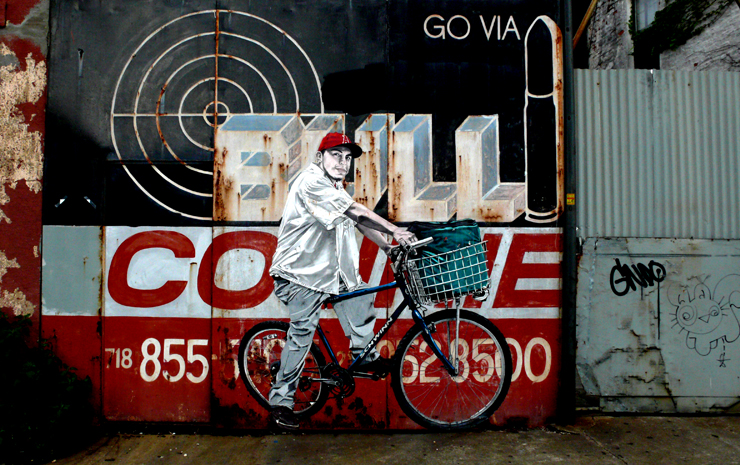 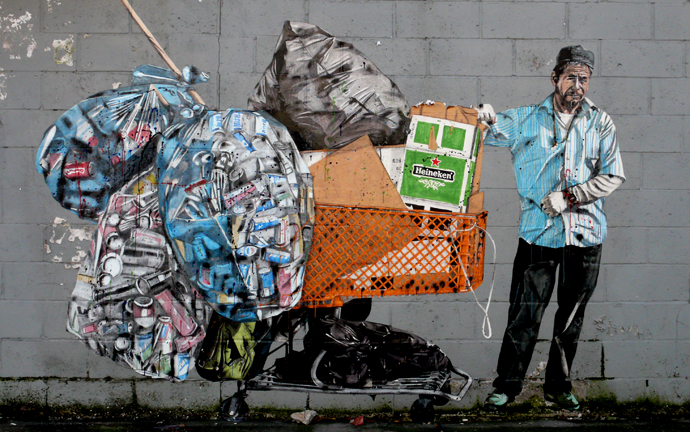 Dismantling Architecture and Industry with Greg Jager in Sicily for "Bitume"
Rome-based artist Greg Jager is “dismantling” the forms of architecture in much the same way that modern graffiti writers have been “deconstructing” the letter form in the last decade. The results ha...
DAZE: "Daily Commute", Solo in NYC
Most people commute to and from work. Some spend hours caught in rush hour traffic, trapped in their cars. Others use their bikes or skateboards or a bobbing, roaring ferry. Some lucky ones just walk....
Jardin Rouge: A Unique Garden for Street Artists to Grow In
The soil in this garden is a deep rich red hue, as is the lifeblood that pumps through this modern compound with echoes of Egyptian mastaba architecture. Jardin Rouge invites Street Artists, graffiti ...
Claudio Ethos and Alex Hornest aka Onesto Collaborate in Sao Paulo
A line drawing illustrator and photo-surrealistic fantasist combine their styles to form one long peculiar collaboration under Sao Paulo traffic. Both Claudio Ethos and Alex Hornest (aka Onesto) have ...
BSA Images Of The Week: 06.12.22
Welcome to BSA Images of the Week! There are always so many hype-dope-cool-rad-slaps things to do in New York period - and often plenty graffiti and street art options. There's the new Rememb...
Berlin Brooklyn Street Art BrooklynStreetArt.com Jaime Rojo Persons of Interest Project M/7 Sally Montana Specter Steven P. Harrington UN Urban Nation