BSA is in Berlin this month to present a new show of 12 important Brooklyn Street Artists at the Urban Nation haus as part of Project M/7. PERSONS OF INTEREST brings to our sister city a diverse collection of artists who use many mediums and styles in the street art scene of Brooklyn. By way of tribute to the special relationship that artist communities in both cities have shared for decades, each artist has chosen to create a portrait of a Germany-based cultural influencer from the past or present, highlighting someone who has played a role in inspiring the artist in a meaningful way.
Today we talk to Esteban Del Valle and ask him why he chose his person of interest, George Grosz.

An interdisciplinary artist living in Brooklyn, Del Valle has been rendering figures and scenarios on walls here and in his native Chicago, San Antonio, Kansas City, Spartanburg – even at 5 Pointz, the graffiti holy place in Queens that was recently buffed and destroyed. A performance artist in the public sphere as well as painter, his complex stories run deep with his contemplations on an imbalanced world. His is an activist approach to tearing apart and rebuilding to reveal influences, emotions, and motivations. In these ways and others he is not unlike his selected subject, George Grosz, a pivotal figure in Berlin’s Dada movement.

A German artist known especially for his drawings of people as caricature during the roaring days and nights of Berlin’s 1920s, Grosz was acerbic, crude and corrosive in his depiction of corruption and abuse of power. Eventually moving to New York and settling down in Bayside, Queens, the artist continued his work as a painter and cultural critic. For his portrait of Grosz, Del Valle inserts the artist into Grosz’ own 1926 painting, Eclipse of the Sun, along with ex Chicago mayor Richard J. Daley and some headless businessmen. Too much to describe here, Grosz can speak for himself:

My drawings expressed my despair, hate and disillusionment, I drew drunkards; puking men; men with clenched fists cursing at the moon. … I drew a man, face filled with fright, washing blood from his hands … I drew lonely little men fleeing madly through empty streets. I drew a cross-section of tenement house: through one window could be seen a man attacking his wife; through another, two people making love; from a third hung a suicide with body covered by swarming flies. I drew soldiers without noses; war cripples with crustacean-like steel arms; two medical soldiers putting a violent infantryman into a strait-jacket made of a horse blanket … I drew a skeleton dressed as a recruit being examined for military duty. I also wrote poetry. —Grosz  Friedrich, Otto (1986). [note] Before the Deluge. USA: Fromm International Publishing Corporation. pp. 37. [/note]

“I believe art is inherently powerful,” says Del Valle, “and that power can be used to reflect and reshape reality. Much like I aspire to do, George Grosz used satirical imagery to call attention to social inequalities while blurring the line between illustration and painting. His poignant content and aesthetic seems just as relevant today as it did in post 1920’s Berlin.” 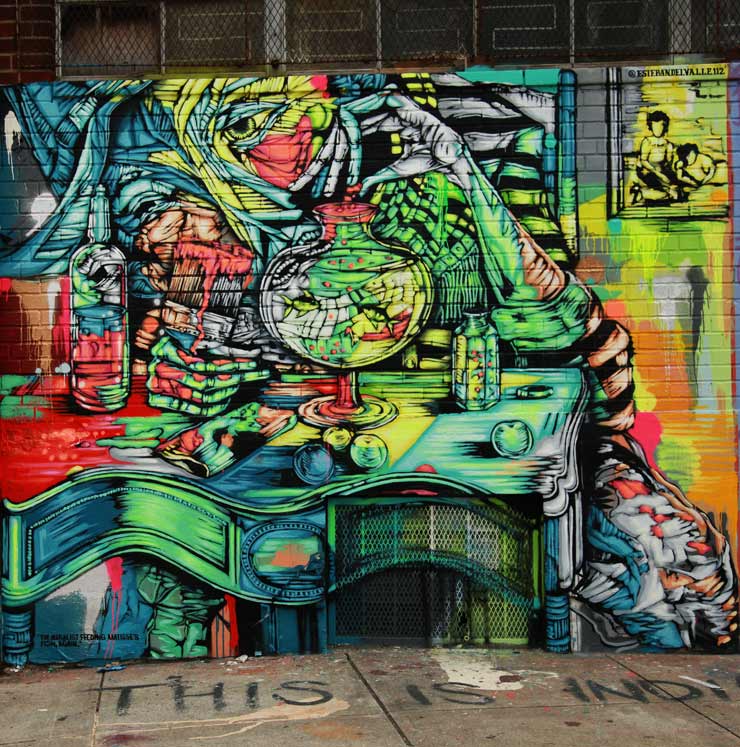 BSA Images Of The Week: 07.10.22
Welcome to BSA Images of the Week! Abortion. Ukraine. Bitcoin. Guns. NFTs. These are topics/themes that street artists are addressing this week in New York - pretty much wherever you go. I...
Barcelona: Open Walls Mural Festival and Conference 2015
Barcelona was known as a city at the epicenter of a bustling lively organic Street Art scene in the mid 2000s. Today that has greatly been cracked down upon by authorities but the Spanish city now boa...
Blek Le Rat Tours the US South
Tennessee and Texas Sample a Certain Street Savoir Faire Look out for Le Rat! He’s getting up in places down south that you wouldn’t normally associate with a French Street Artist, much less t...
Rafael Schacter Investigates "Street To Studio"
“These are artists who are thus not slavishly reproducing their exterior practice within an interior realm but who are, rather, taking the essence of graffiti – its visual principles, its spatial stru...
BSA Film Friday: 10.13.17
Our weekly focus on the moving image and art in the streets. And other oddities. Now screening : 1. Swoon: Fearless BSA Special Feature: Swoon: Fearless Using existing and new footage of S...
Berlin Brooklyn Brooklyn Street Art BrooklynStreetArt.com Esteban DEl Valle George Grosz Jaime Rojo murals Persons of Interest Steven P. Harrington Street Art UN Urban Nation