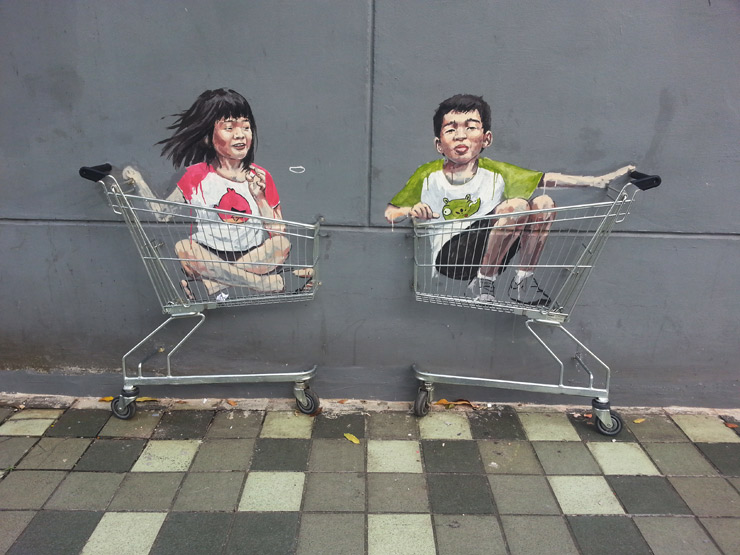 A quickly rising Street Art installation artist from Lithuania is keeping his work refreshingly down-to-earth and sincerely engaging with the public. While some artists working on the street can lose sight of how to have fun, Ernest Zacharevic keeps his eye on creating installations that punch through the third dimension and pull passersby into his work, and some times on it.

It’s not surprising to find his sculpture-paintings including wheels, as in this new one he’s just finished in Singapore. “It’s a part of ‘play’, but also a wider narrative about the continuous desire by human beings to travel, push forward, explore unknown horizons,” he explains to BSA.  “Cars and bicycles and tricycles were invented because just walking is too slow to most of our imaginations.” 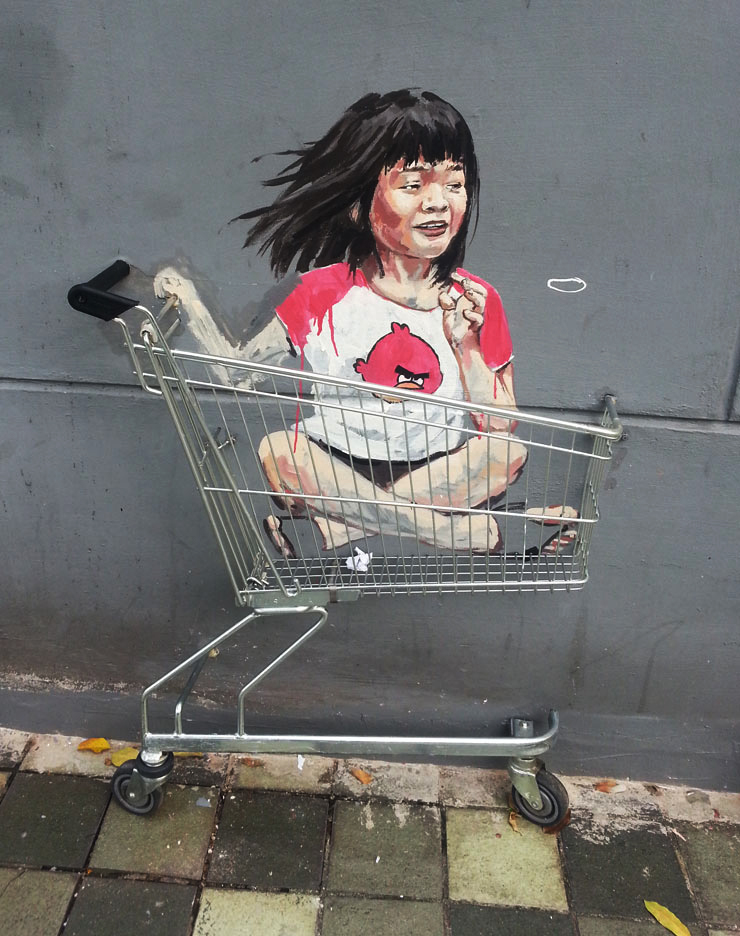 The new work on the street is rare considering Singapore’s very severe punishment for graffiti and street art, which actually includes severe beatings that can rip skin off the backside, called caning. “We feel that it is a ground breaking project that will hopefully open Singapore up for other artists,” says his friend and photographer Gabija Grusaite, who shares these images of his new piece that uses a sawed in half shopping cart. Possibly the organizers saw the success of his piece last year in Penang, Malaysia, which became a popular tourist destination and still draws people to see it and pose with it daily.

“Most of my work is photography based and site-specific, so I photograph my subjects and later choose angles for painting. Working with children allows more anonymity, I don’t consider my artworks to be portraits of a specific person, rather a universal experience,” says the energetic and curious Zacharevic, who is still in his mid-20s and has done installations in Japan, Italy, Norway, Lithuania, and Singapore so far this year.  “It is also easier to work with children – they are not self-concious and are not afraid to look stupid or ugly. So we play together and I take pictures that later translate into my artwork.” 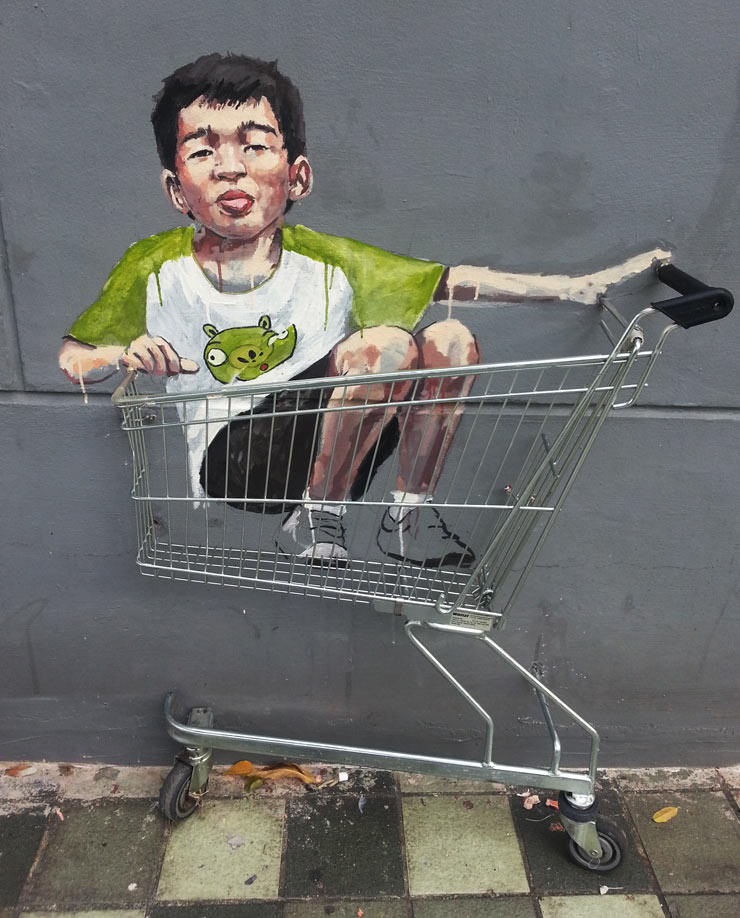 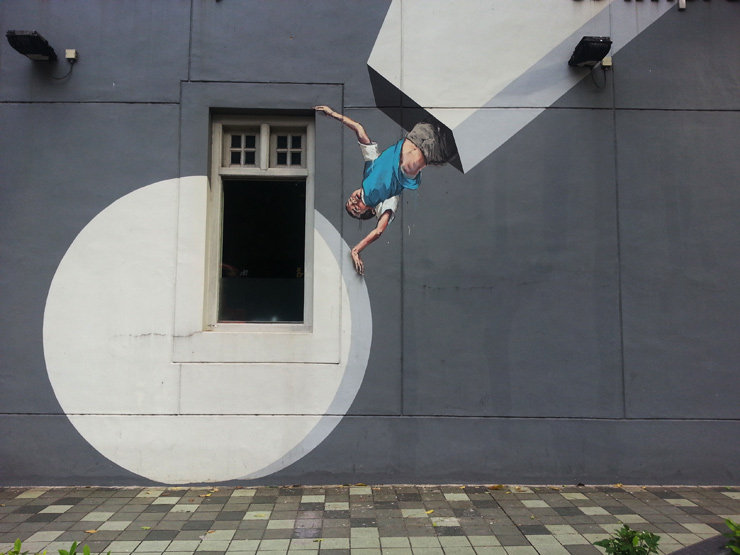 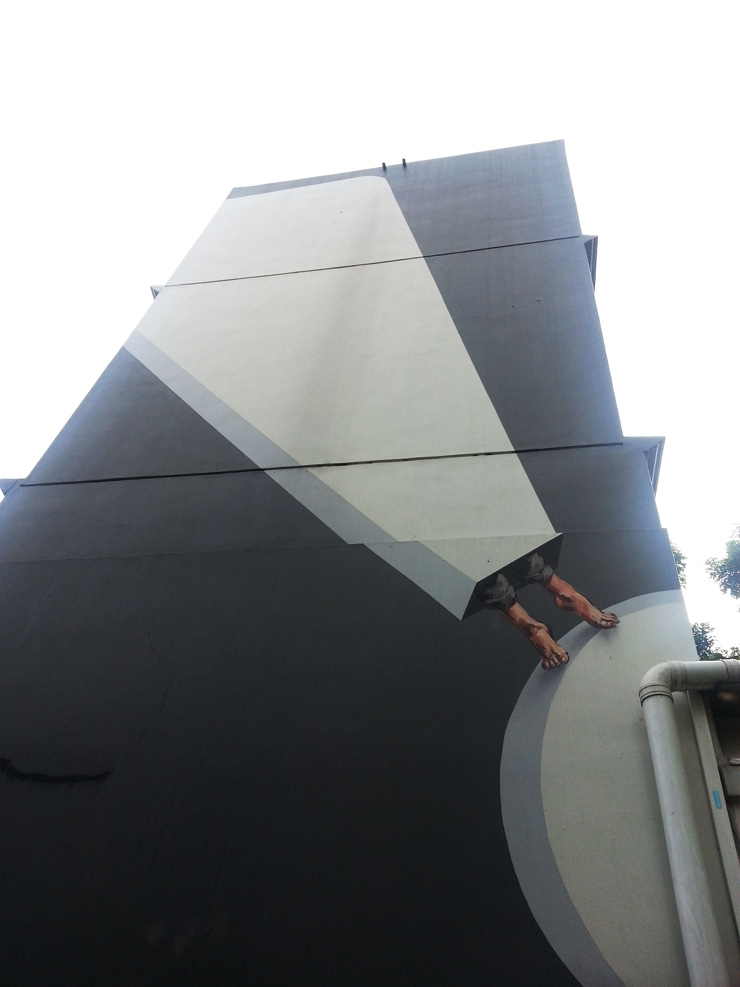 Take a look at Ernest’s installation last year in Georgetown, Malaysia, that had hundreds of people interacting with it moments after it was finished and is a celebrated tourist destination. 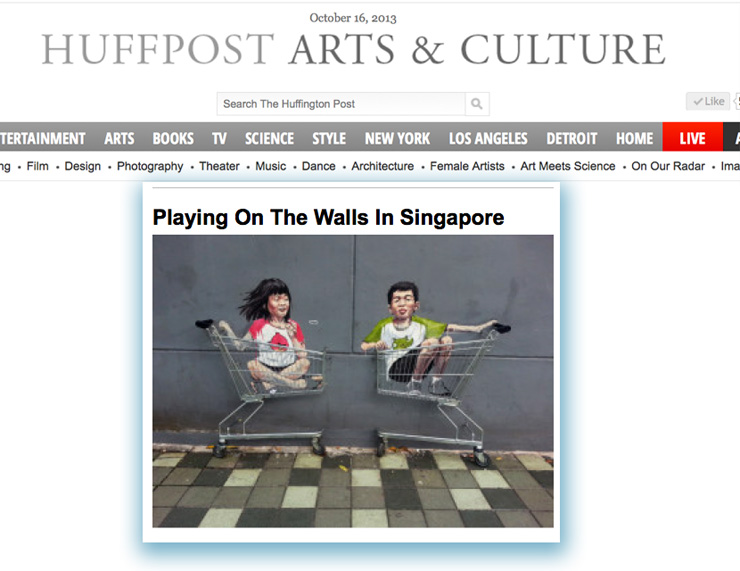 BSA Images Of The Week: 09.28.14
Here's our weekly interview with the street, this week featuring Bikismo, Cera, Conor Harrington, indie184, Knarf, London Kaye, Nemo, NemO's, Pyramid Oracle, Sheryo, Stikki Peaches, The Yok, Tro...
Fanzara, A Tiny Spanish Town Reinvents Itself With Help From Artists
Coming up during the third weekend of July will be the second installment of MIAU (The Unfinished Museum of Urban Art) in the tiny town of about 325 people named Fanzara, Spain. Begun by local artists...
Joe Caslin in Dublin and On a Castle for Same-Sex Marriage
Irish illustrator Joe Caslin has just completed a two-mural campaign this spring in Dublin’s city center on the side of a castle in Co Galway in support of this May’s country-wide same-sex marriage re...
Johannes Mundinger "Below The Fog" in Berlin
Indoor and outdoor merge in shifting slabs of memory that slip and stick in this new Berlin wall by Johannes Mundinger. In work that similarly slides from representative and abstract, the work of the...
BSA Images of the Week 09.17.17 Urban Nation (UN) Special
Welcome to Sunday! This week we have a special edition of BSA Images of the Week; Dedicated to stuff on the street for last nights opening of Urban Nation Museum of Urban Contemporary ...
Brooklyn Street Art Ernest Zacharevic Gabija Grusaite Jaime Rojo Singapore Steven P. Harrington