Nuart 2013 continues to engage and converse with people in Stavanger Norway as the big formal opening Saturday night was packed with guests and tours have begun around town with Gt Aamdal and Kristel Talv, who yesterday had a group of a hundred people following them around as they helped explain the new works that have been appearing and the artists who have been creating them.

Today we bring you some recent photos of works in progress shot by Gabija Grusaite and a brief interview with one of the artists this year at Nuart, Ernest Zacharevic from Lithuania, who has a pretty large following of ardent fans who dig his technique of interplay with mural and sculpture for an integrated third dimensional experience.  By focusing on the spontaneity of children’s play, Zacharevic can tap into the original instincts of adult viewers who may have lost their ability to access their playful nature. His street work is unpretentious and sometimes ingenious, while steadily staying away from being cloying or overly sentimental. 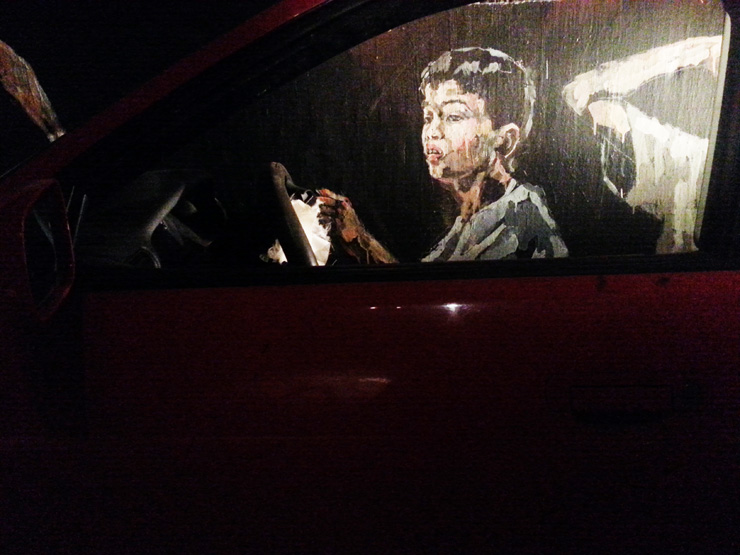 Ernest took a few moments during a break from this weekends preparations to talk to BSA about his work.

Brooklyn Street Art: Many of your pieces include play and more specifically, children at play. How important is that theme for you and what attracts you to it?
Ernest Zacharevic: Most of my work is photography based and site-specific, so I photograph my subjects and later choose angles for painting. Working with children allows more anonymity, I don’t consider my artworks to be portraits of a specific person, rather a universal experience. It is also easier to work with children – they are not self-concious and are not afraid to look stupid or ugly. So we play together and I take pictures that later translate into my artwork. I really like this unrestricted energy. 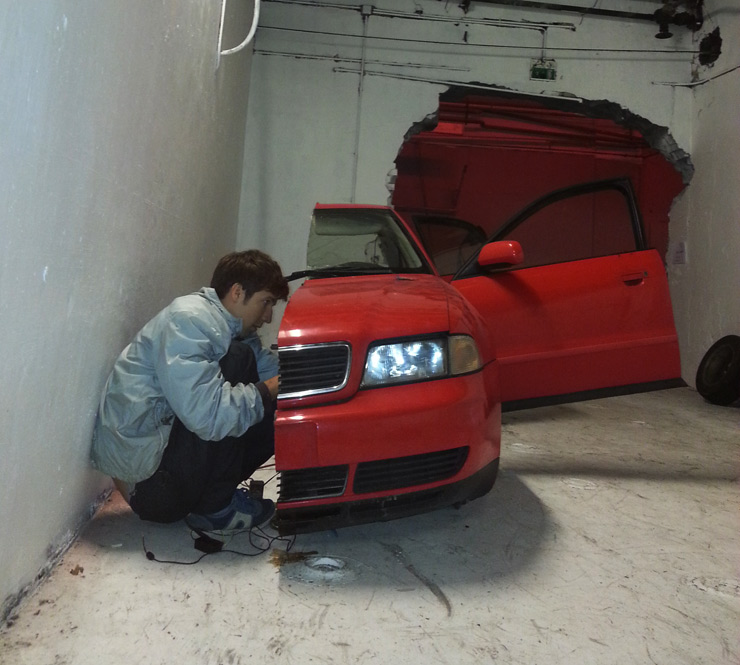 Ernest Zacharevic at work on his installation. (photo © Gabija Grusaite)

Brooklyn Street Art: You have been traveling a lot in the last year – where have you gone and can you talk about one of your favorite experiences on the street with your work?
Ernest Zacharevic: I do travel a lot. Japan, Italy, Norway, Lithuania, Malaysia – to name few places I’ve been this year. At the moment I am based in Penang, Malaysia, but originally I come from Vilnius, Lithuania and I graduated from Middlesex University, London where I lived for 5 years. My artwork is heavily influenced by all these layers of geographical backgrounds.

Probably the most memorable project I’ve done so far is Mirrors George Town murals that I created for George Town Festival in 2012. The murals became so popular that they started having a life of it’s own – there are people lining up to take pictures with it and Malaysian Government recognized them as valuable tourist objects. Crazy! It was even copied by one Chinese town near Shanghai. It is really nice for an artist to realize that his piece of work means so much to other people. 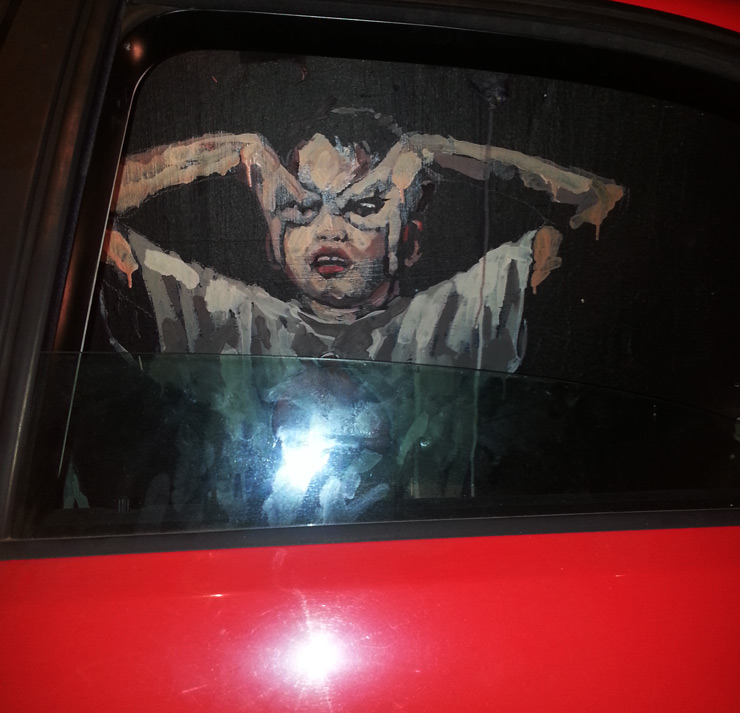 Brooklyn Street Art: Many of your characters have mischief in their eyes and their actions. Are you getting into trouble in Stavanger?
Ernest Zacharevic: I wish, but the weather is taking it’s toll. Stavanger is great! Everywhere you go there are traces of street art and amazing murals round the corner, places you would never expect to see it. It really inspires me to do a few smaller pieces if the Norwegian summer will be kind to me tomorrow.

Brooklyn Street Art: Can you talk about using wheeled forms of transportation in your vignettes – bicycles, shopping carts, rickshaws… do you use them to create a sense of movement?
Ernest Zacharevic; Yes! It’s a part of play, but also a wider narrative about the continuous desire by human beings to travel, push forward, explore unknown horizons. Cars and bicycles and tricycles were invented because just walking is too slow to most of our imagination. That is way my main installation for Nuart 2013 will feature a car – half sliced – continuing the theme of my previous work.

Brooklyn Street Art: Sometimes you integrate something that is already on the street or the wall into your piece. Do you find yourself doing this mentally as you walk through the streets?
Ernest Zacharevic: I find everyday objects to be fascinating. Signs that look like animals, doors that smile, little holes in the wall that look like part of a Tom & Jerry cartoon. It’s fun and I love to reveal this to other people just to make them smile. 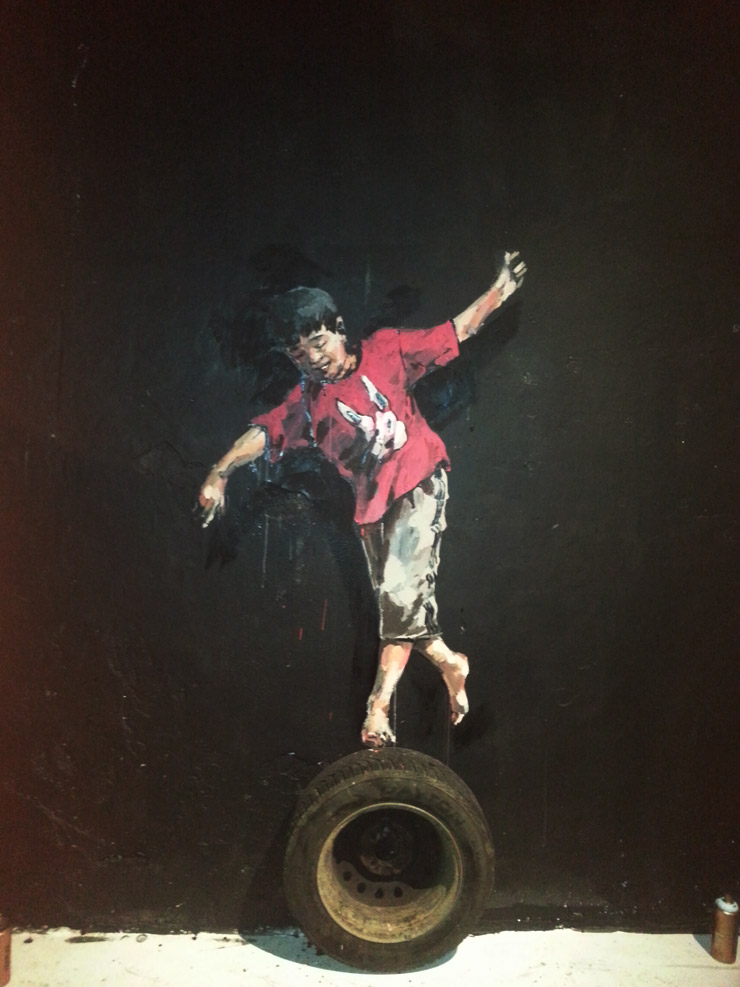 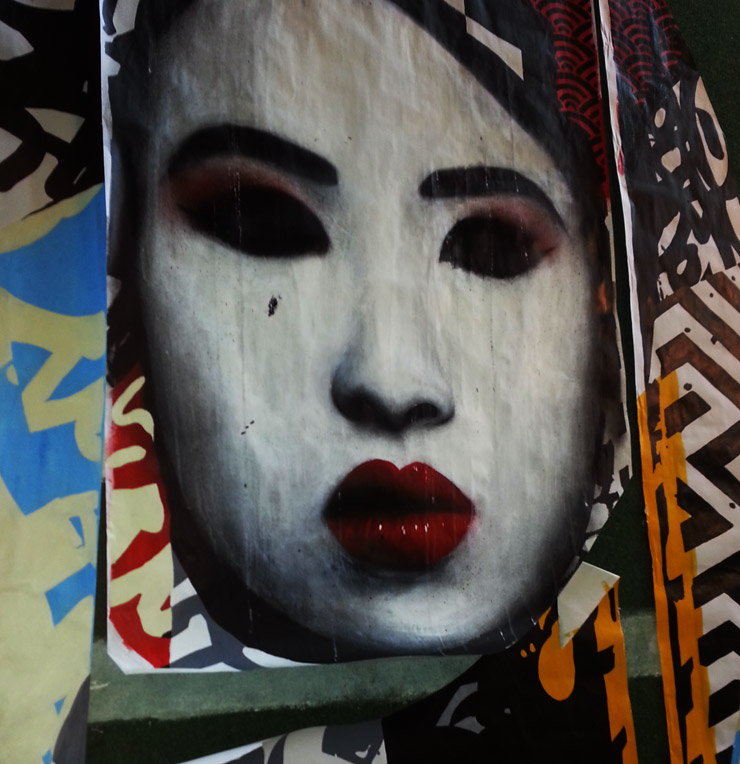 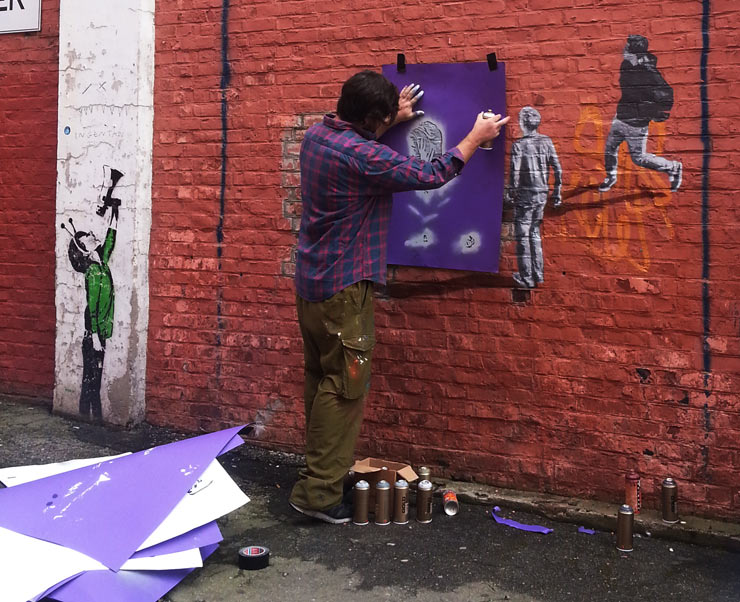 STROK at work on his wall. (photo © Gabija Grusaite) 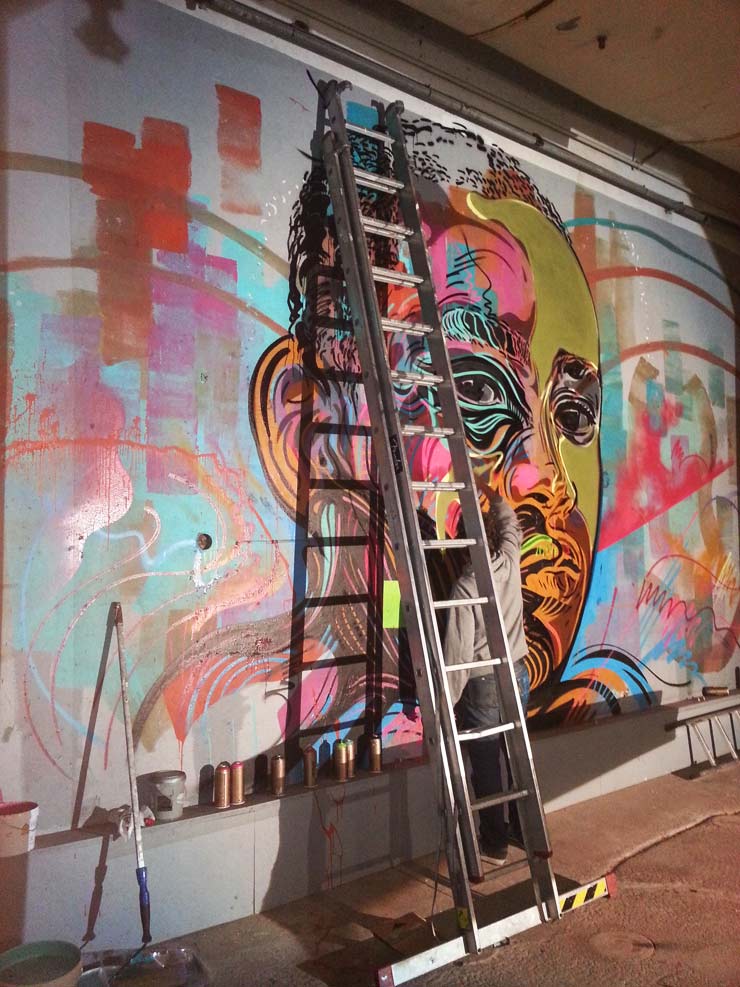 Miss Tic Leads the Women in the Streets : Paris Dispatch 1
Ah, the women of Paris! Street artists have many interpretations of the female form, visage, and image. We have been thinking of female street artists in particular for the last few days because ...
A Brief Look at NY Art Fairs : Spring/Break & Scope
Did you have a chance to hit some of the shows during New York’s Amory Week? Part blessing and curse, New York has this pre-Spring ritual of organized galleries tucked into little booths in far-flung ...
Tracking Phlegm in Wynwood, Miami.
Phlegm. Wynwood, Miami. (photo © Jaime Rojo) It’s over a year old, but this mural by UK's Phlegm along rail tracks in Miami has a certain timeless quality. Maybe it is the illustrator’s monochroma...
Live Stenciling in Berlin with Street Artists for "Cut It Out"
The stencil has been a steady presence on the street since the beginning of graffiti and Street Art. Possibly picked up from commercial or military methods of labeling shipments, machinery, signage, a...
Painting the Eye of a Ukrainian Storm: My Dog Sighs in Cardiff, Wales
As the conflict between Russia and Ukraine continues to unfold street artists around the world are taking to the streets to express their sentiments for peace. According to those who have lived it an...
Brooklyn Street Art C215 Ernest Zacharevic Gabija Grusaite Gt Aamdal Hush Jaime Rojo Kristel Talv Norway Nuart 2013 Stavanger Steven P. Harrington Strok