New work from Alice Pasquini in Shoreditch, Sydenham, Camden, and boatside along the River Thames where mud boots are required and someone to hold your ladder is appreciated .

Jessica Stewart shares these images with BSA readers of Alice in distinctly different areas of London, where the responses to the sight of an artist painting on your street vary greatly.

In Shoreditch, Alice was taken rather as part of the expected show, says Jessica. “Shoreditch is the hub of Street Art and Alice got everything from random reporters to a guide who does street art tours walking by,” says Jessica. The fellas in the spot next door seem particularly unimpressed of the lady on the ladder as they discuss the news of the day.

In Sydenham, a neighborhood that is newly embracing art to illustrate its vibrancy, the response was welcoming. “In Camden, which funnily enough doesn’t get painted much, people were much more fresh in their observations and really excited to see something go up,” observes Stewart. 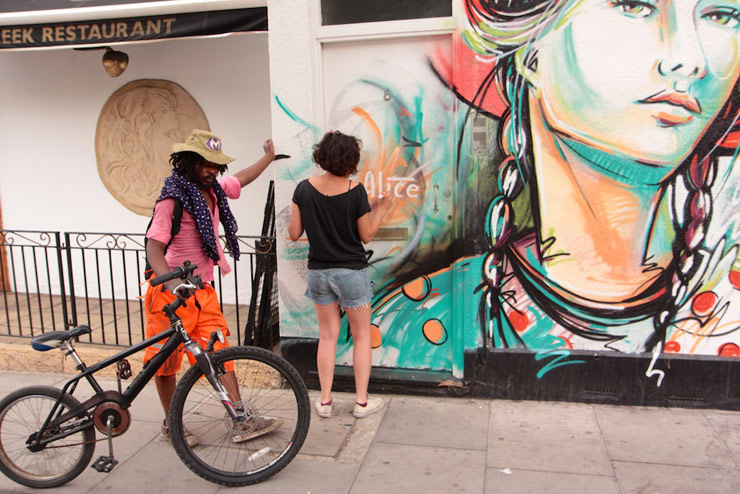 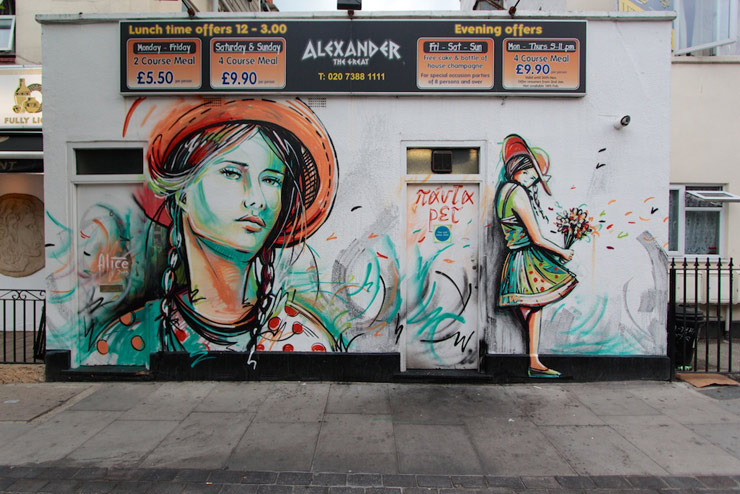 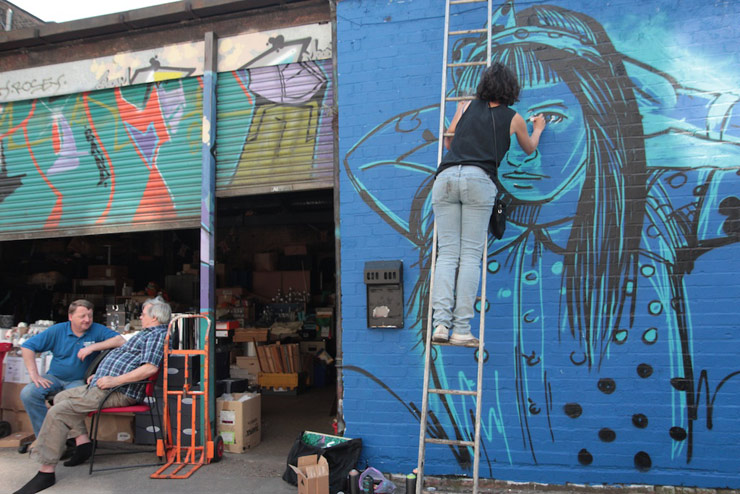 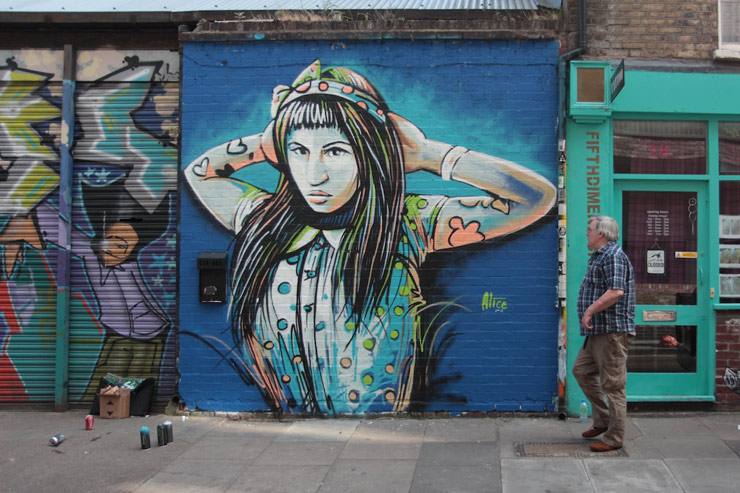 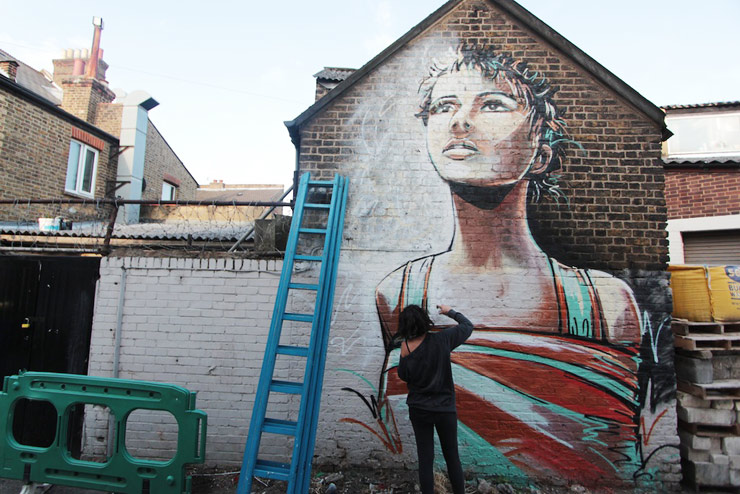 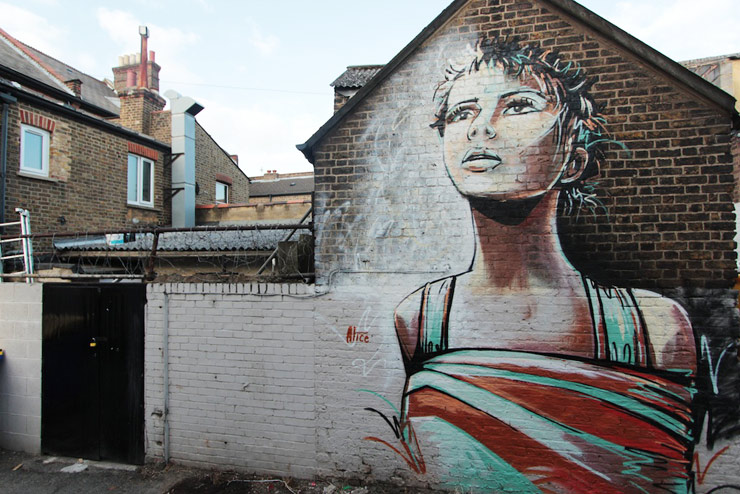 Then in the muddy moorings of a dry dock barge in Bermondsey, just up river from Tower Bridge, Alice worked alongside Miss Van, Ciro Schu, Sheryo, and The Yok painting on the side of a boat while the water raised and receded and at times the artists felt like they might get sucked into the earth and the water.

“It was a crazy few days of racing against the tides to get in painting time,” says the photographer as she recalls the hotly humid air and continuously changing conditions.  In the video of the boat painting party below that was shot and edited by Ben Grubb, it’s good to see Alice alongside the others even while the water rises. 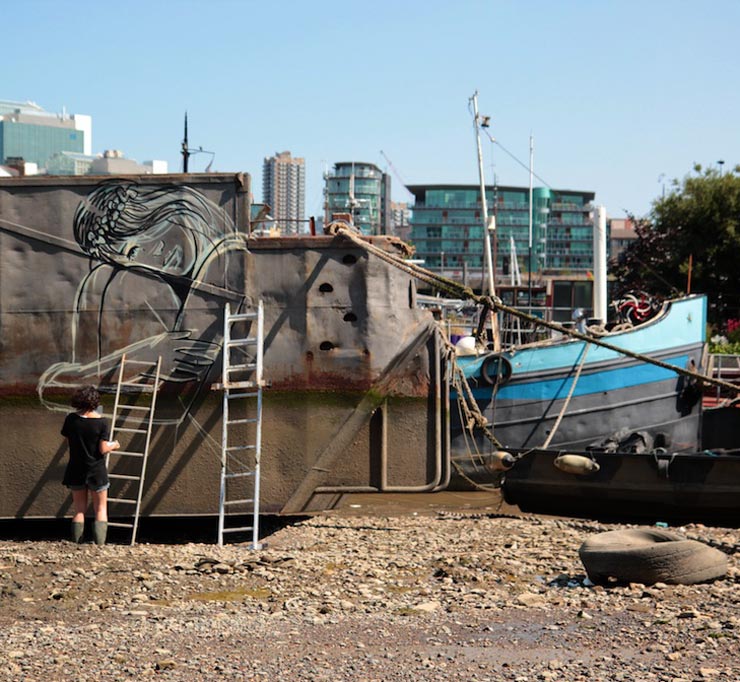 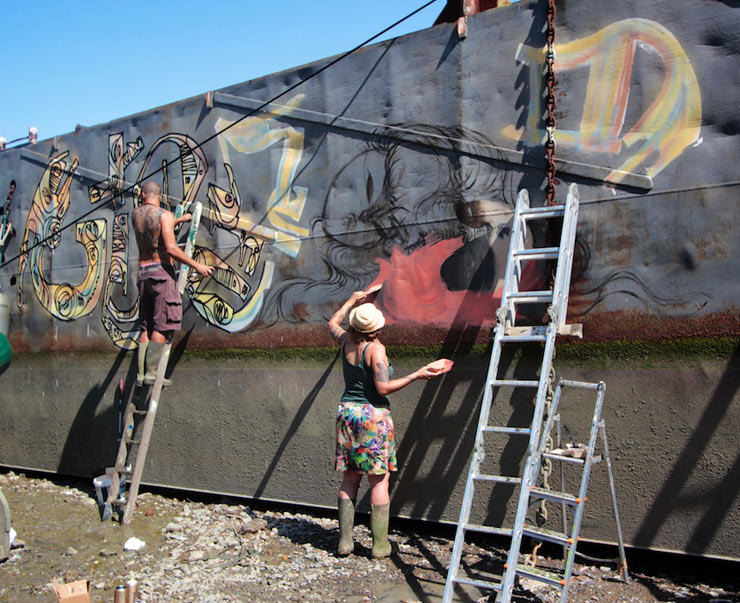 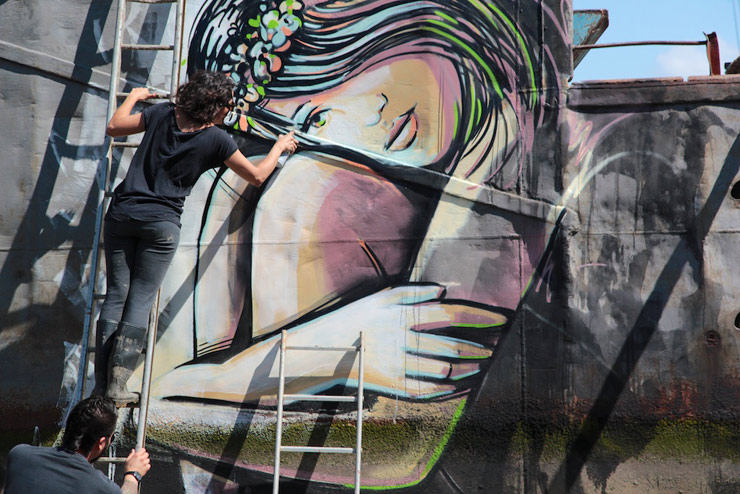 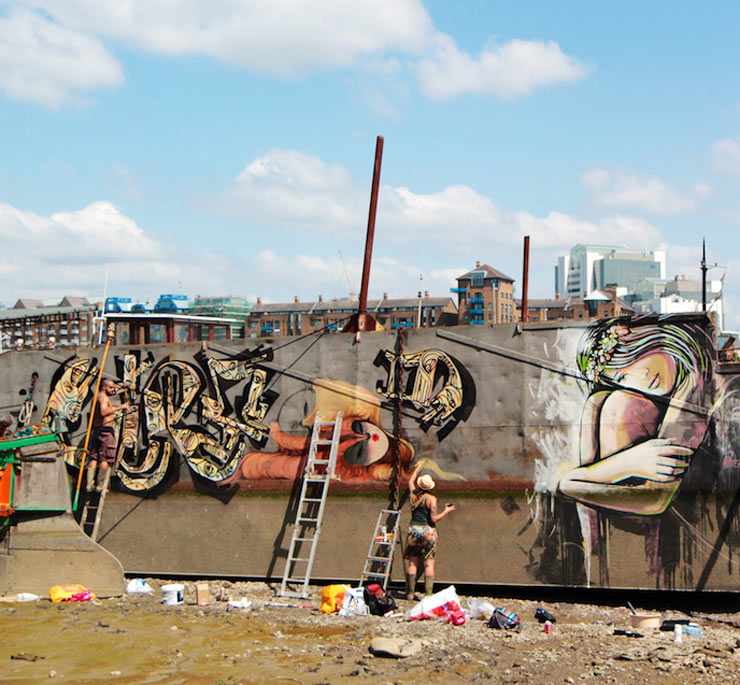 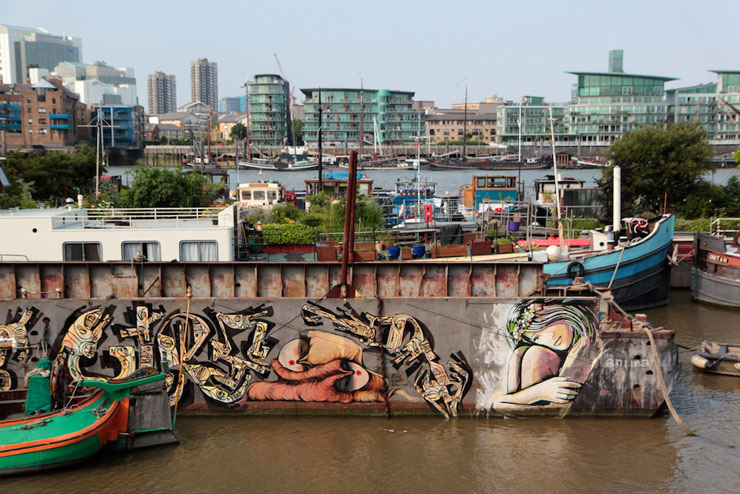 The Sydenham wall was coordinated with GlobalStreetArt.com.

The Bermondsey Boat painting was coordinated by Propa Stuff (www.propa-stuff.com)

A short film documenting the artists filmed and edited by Ben Grubb.

BSA Images Of The Week: 08.03.14
It's the Dog Days of Summer and there are a lot of cool cats on the street right now. Here's our weekly interview with the street, this week featuring Adam Fujita, Be Everything, Che Man, Clint M...
INDECLINE Hijacks Billboards in Memphis to Defund the Police
That charming GEICO gecko looks like he’s darned fed-up with the highway police in Memphis, Tennessee. Why else is he telling drivers to defund them? Indecline. Memphis, TN. October 5th, 2021. (ph...
Where Graffiti Art Is The Rose of The Desert : Spraying Outside the Jardin
When you are a renowned graffiti writer living 25 minutes outside of Marrakech at an artists compound and painting in your studio to prepare for an upcoming exhibition on canvas, sometimes you still a...
Graffiti and Street Art Lock Up "21st Precinct" in New York
This weekend the NYPD police precinct is hosting a graffiti and street art show, and the public is welcome to see every floor completely swimming in aerosol and plastered in wheat-paste. Admit it, it...
Olek Warms Little Italy With Giant Multi-colored Freedom
The previous NYC record for frigid cold on January 7th was 6 degrees (F). Tuesday broke that record at 4 degrees. Olek decided we needed a blanket. Olek for The L.I.S.A. Project NYC (photo © Jaim...
Alice Pasquini Ben Grubb Bermodsey Brooklyn Street Art Camden Ciro Schu GlobalStreetArt.com Jaime Rojo Jessica Stewart London Miss Van Propa Stuff Sheryo Shoreditch Steven P. Harrington Sydenham The River Thames The Yok Tower Bridge U.K.