Street Artist, teacher, and cultural emissary Specter just returned from Uzbekistan, Kyrgyzstan and Kazakhstan where he was working with local artists in a project called  Global Art Lab to try their hand at painting walls, including these inside a crumbling theater building. The under-utilized Tashkent space is spare and open and analogous to the abandoned and neglected places that many Street Artists and graffiti writers are attracted to around the world, not to mention its storied past that adds to the somewhat haunting quality of the roughened interior. 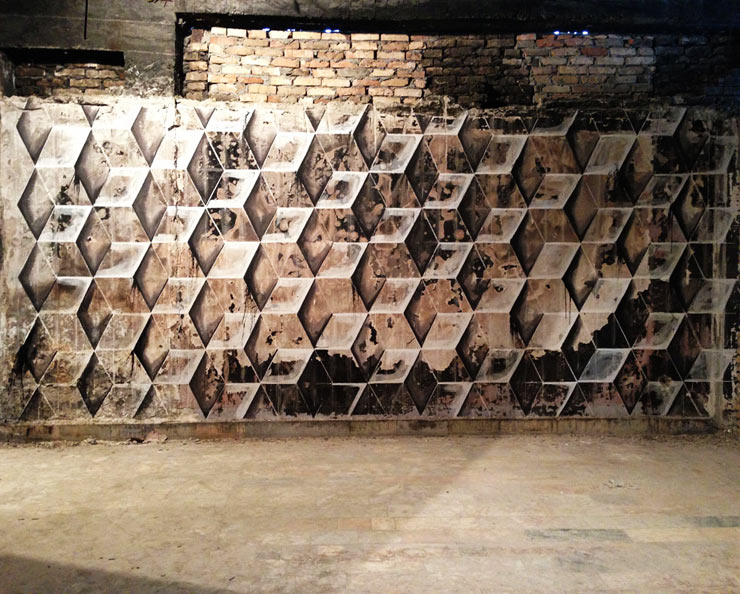 The top two floors of the Ilkhom Theater (Ильхом Театр Марка Вайля) were destroyed in a fire two decades ago and its founder Mark Weil was murdered at its entrance  the day before a performance in 2007. Today performances and rehearsals take place in the spaces that remain usable – but the roof still gives them problems.

Working through the organization CEC ArtsLink, the Brooklyn artist feels like his teaching style was perfect for the environment and was happy to have bright minds engaged to activate the walls here. “The artists were extremely talented,” he says.  “They worked hard and I think we created a really special exhibition.” The organization also has featured others from the street art/public arts scene including Mark Jenkins and  Evan Roth of Graffiti Research Lab.

Included in the largely monochromatic program are three large walls he painted himself that he says were inspired by local traditional patterns. Here are his new walls and many of the walls created by the students, many who pose here with their work at a reception that was held at the end of the project. 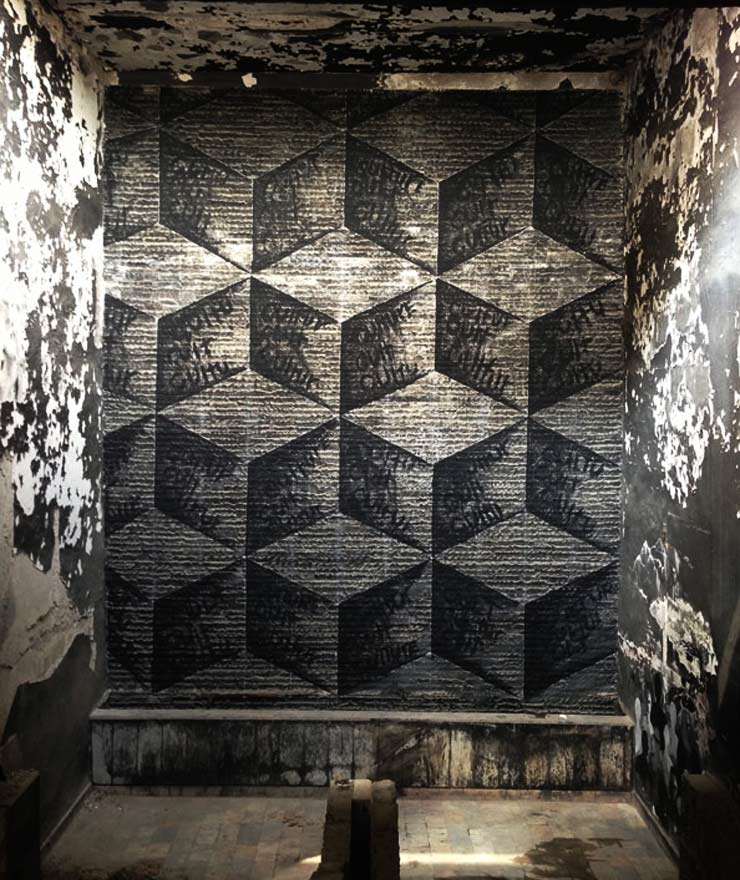 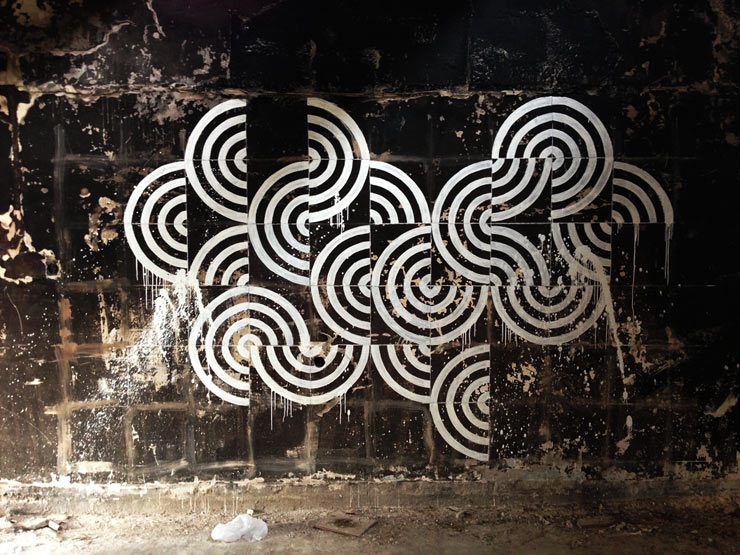 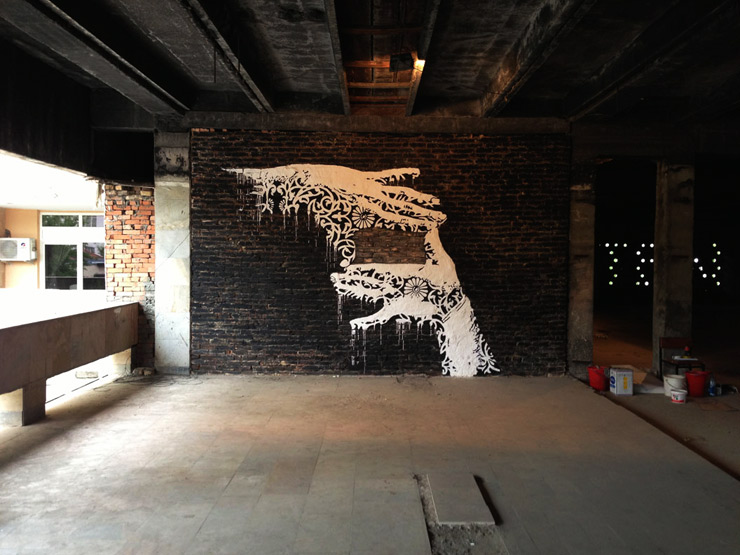 A piece by a local artist who participated in the exhibition. (photo © Specter) 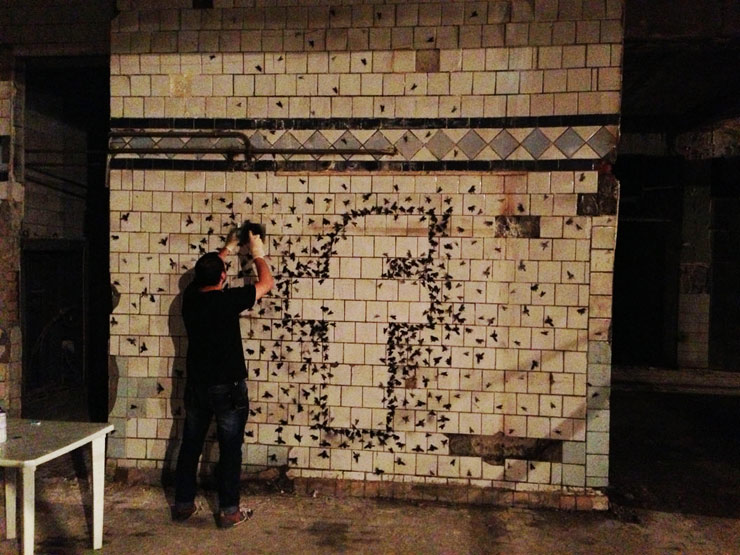 A local artist working on his piece that appears to form the logo for Facebook. (photo © Specter) 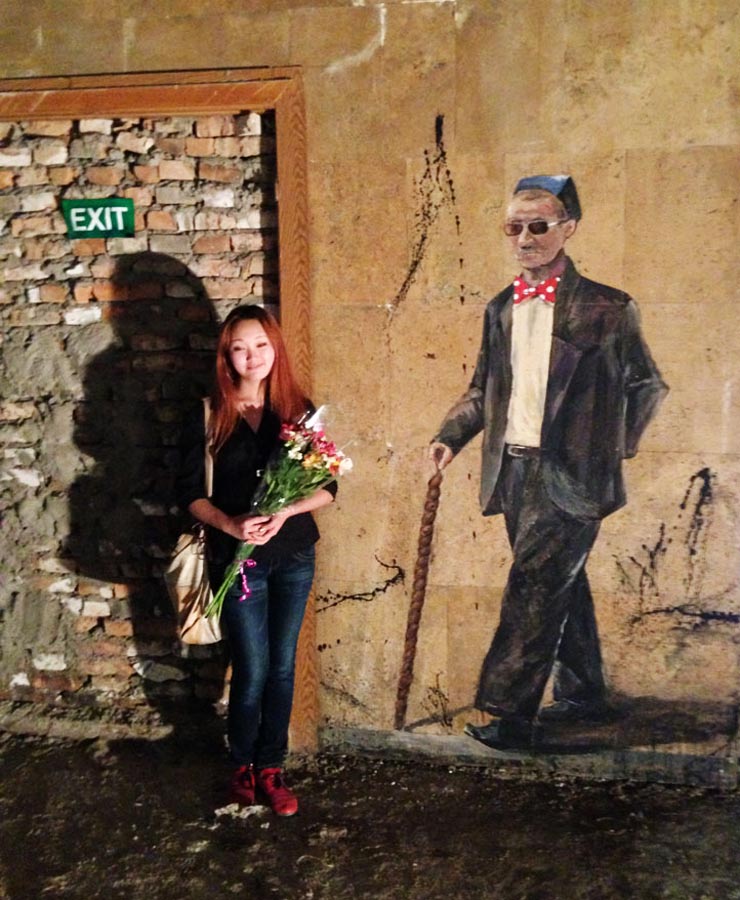 A local artist posing in front of her piece. (photo © Specter) 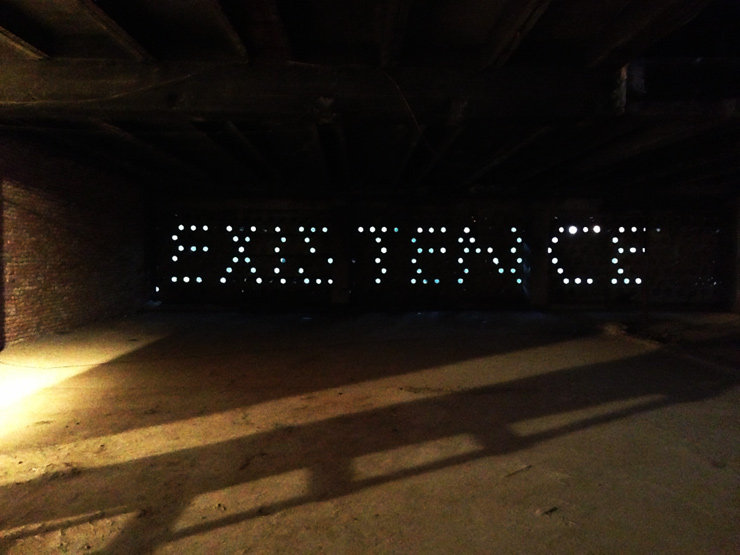 Selective plugging of holes in this serrated concrete facade creates a digitized piece by a local artist who participated in the exhibition. (photo © Specter) 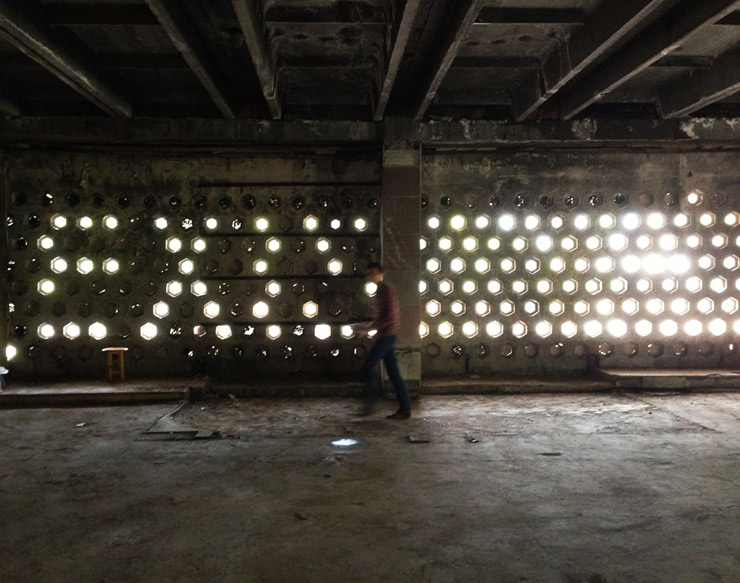 A local artist walking in front of his piece. (photo © Specter) 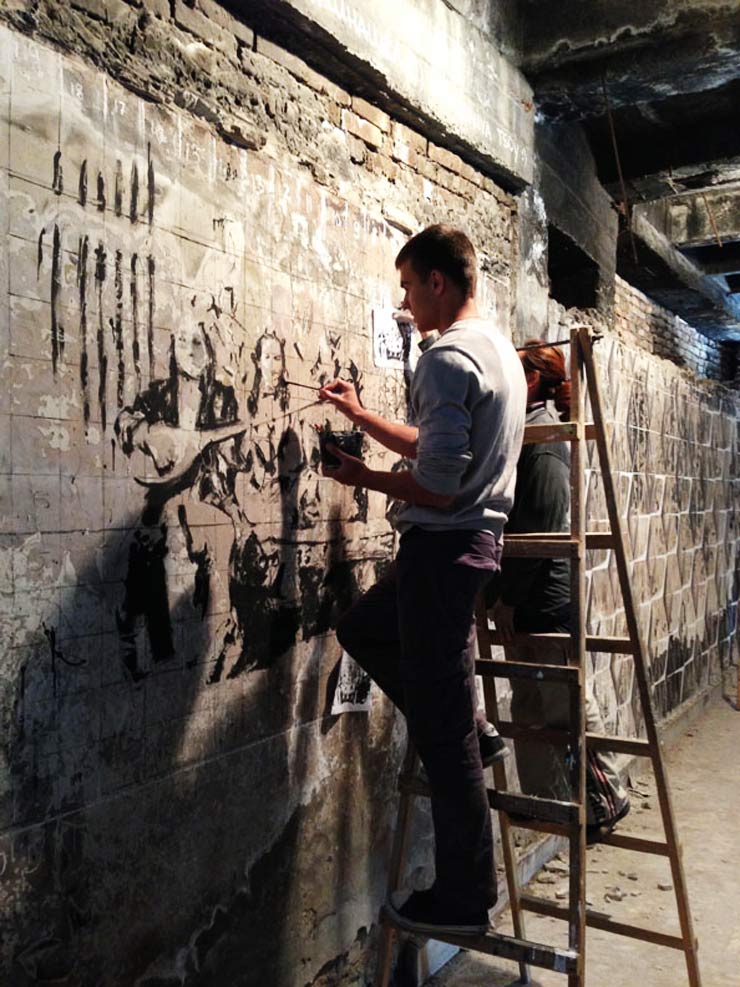 A painter at work. (photo © Specter) 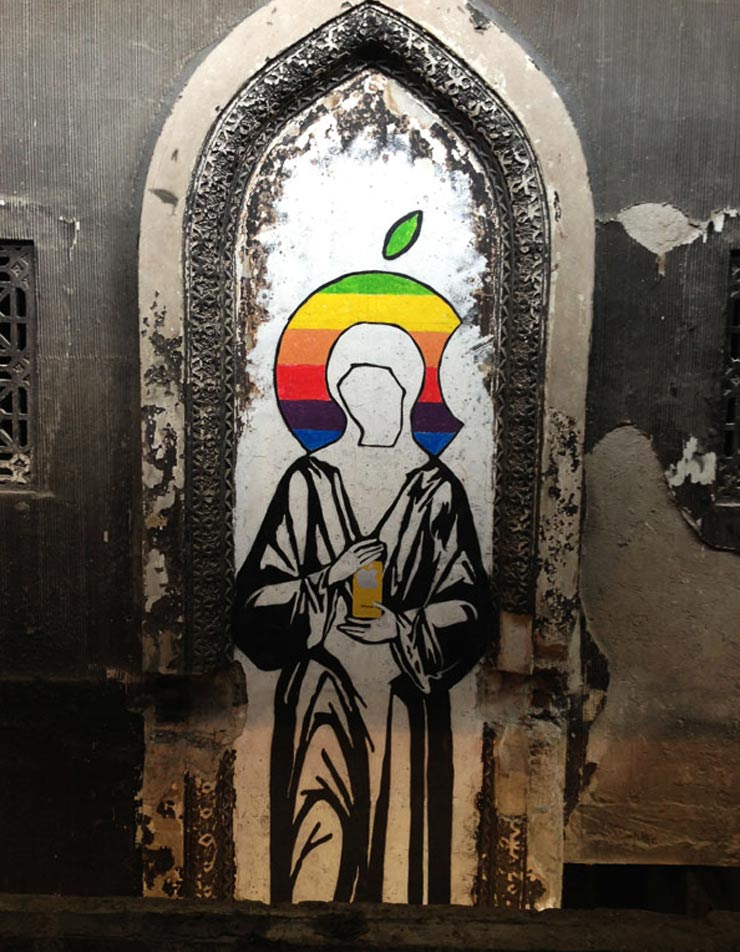 Apple as religious iconography. A piece by a local artist who participated in the exhibition. (photo © Specter) 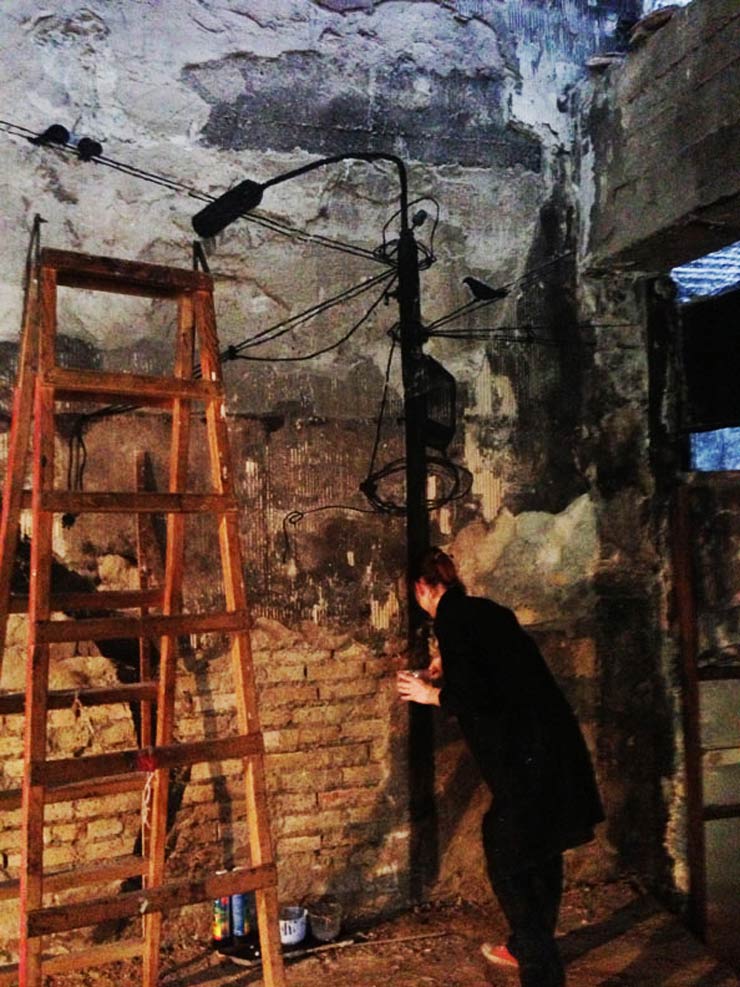 Birds on a wire in this piece by an artist in the program. (photo © Specter) 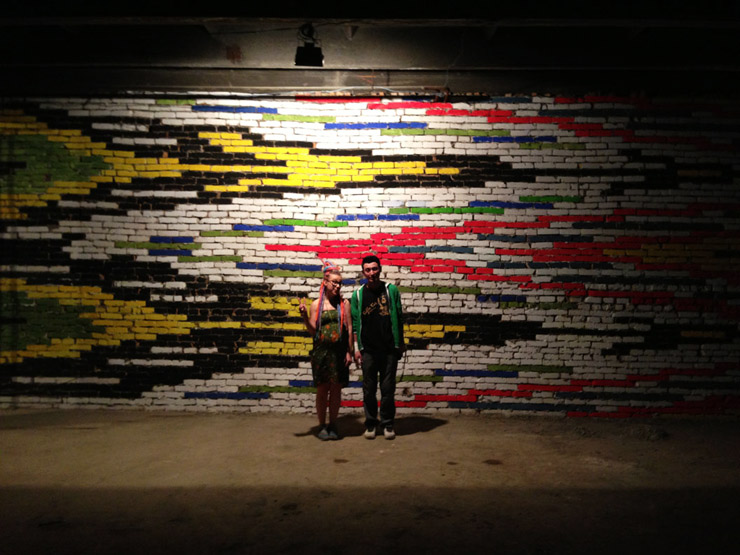 Two participants pose in front of their piece. (photo © Specter) 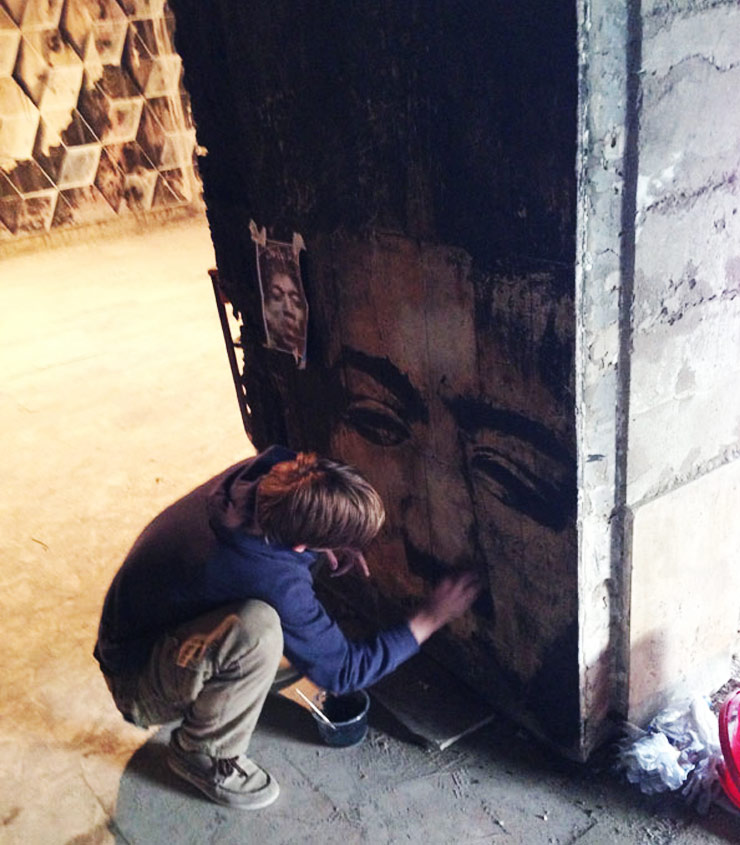 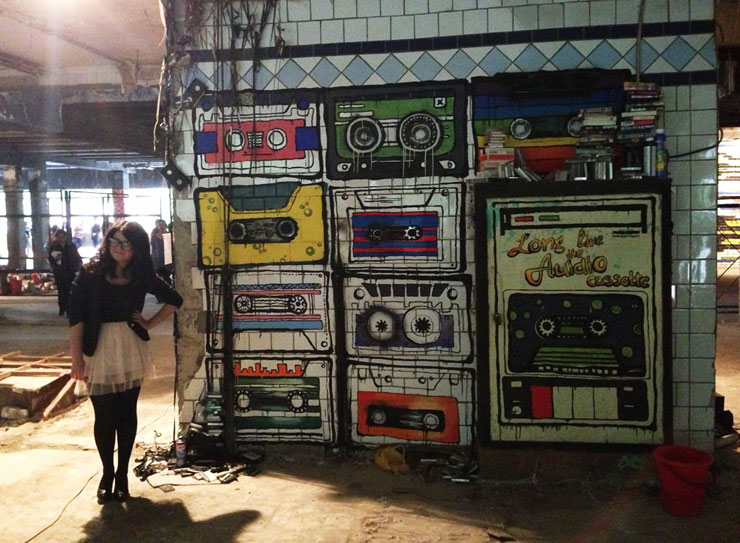 A local artist posing in front of her piece, a collection of cassette tapes and a player. (photo © Specter) 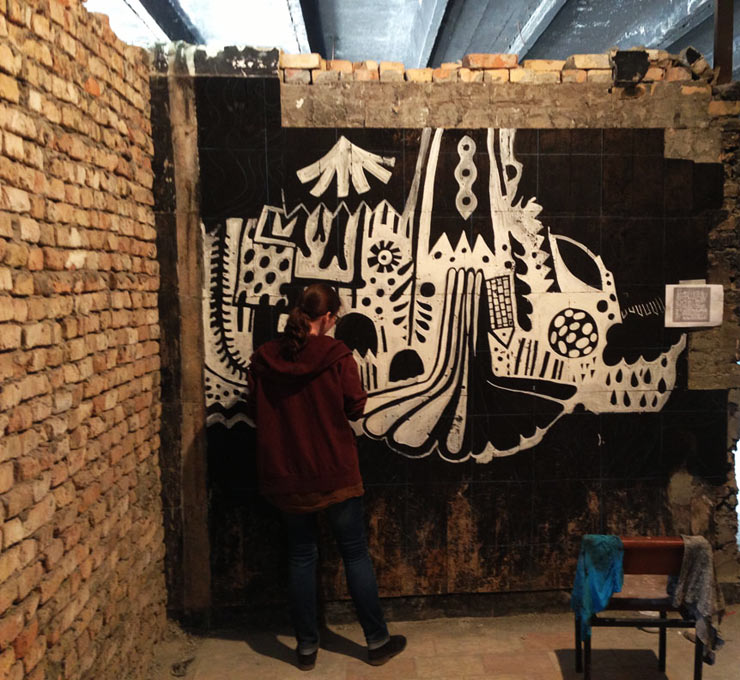 A local artist working on her piece. (photo © Specter) 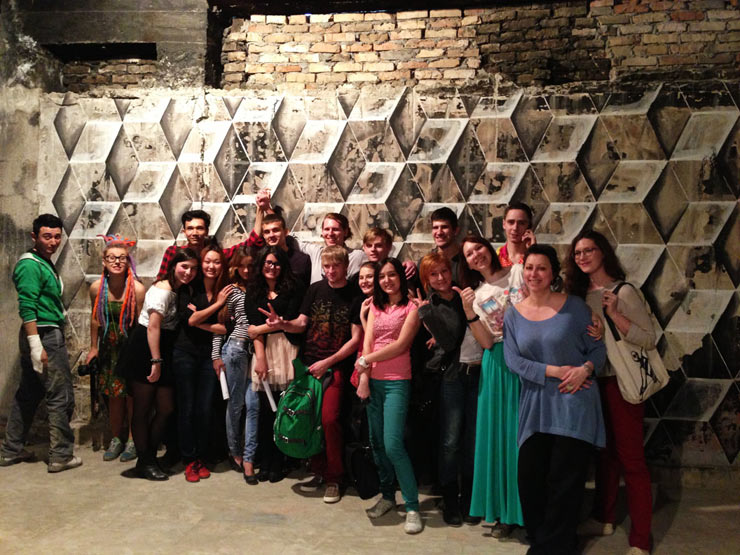 A group shot of all the participating artists, mentors and organizers. (photo © Specter)

BSA Images Of The Week: 12.02.18
Sliding into the chaos this week with great new stuff that hits on pop, poetry, technology. The madness of New York sometimes fuels the message on the street; other times it feels like NYC is merel...
Images of Week 06.14.09
Black Heart in the Sun (Bishop 203)  (photo Steven P. Harrington) Yo, check out the color! (JMR) (photo Jaime Rojo) Department of Parks Pool Rules: No. 4: Please check ...
You're the Heart and Soul : Oliver Rios Creates Tribute to "Native New Yorker 2020" / Dispatch From ...
While New York has always been a melting pot of cultures and languages and people from all over the world, it’s also a fundamental responsibility to also keep our eyes and ears on the folks who are “...
"Lost Optics" and his Post-Graffiti Mural for SISF Festival in Sibiu, Romania
“My proposal for this year's mural is a kind of post-graffiti,” says the Bucharest-based member of Sweet Damage Crew, using a term being bandied about by scholars and academics these days to describe ...
Dan Witz Paints Skinheads, Slam Dancing, Erotica
Because you can’t get your fill of angry white men from all the Donald Trump rallies this spring, painter and Street Artist Dan Witz is presenting Mosh Pits, Raves and One Small Orgy at Jonathan Levin...
Brooklyn Street Art Central Asia Gabriel Specter Jaime Rojo Specter Steven P. Harrington Tashkent Uzbekistan