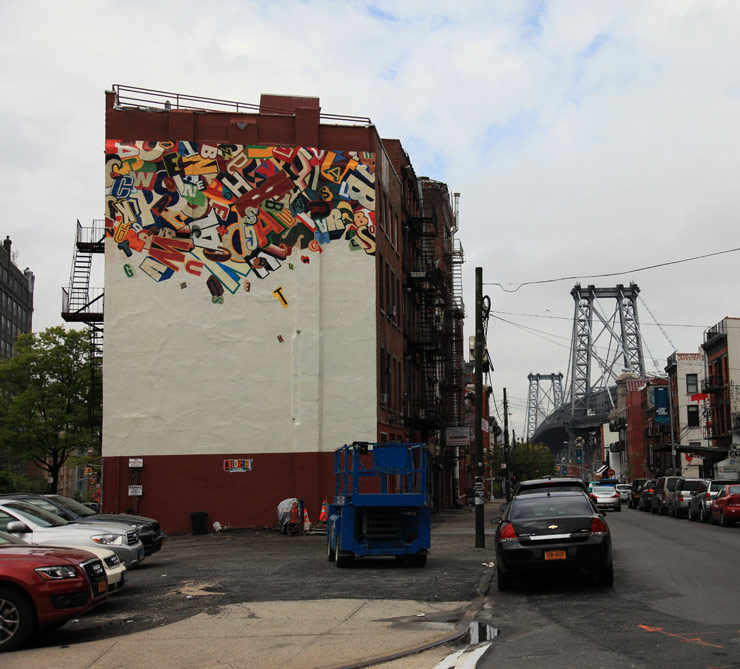 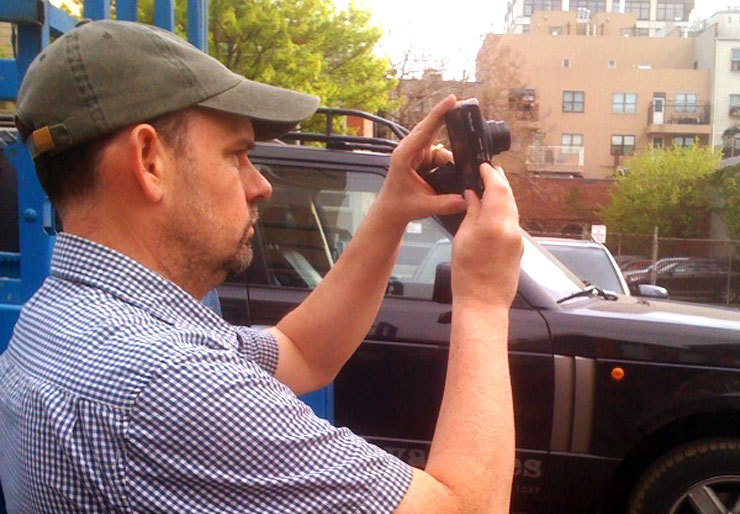 The inaugural wall from a new program called “The Big Brush” by commercial outdoor advertising company Colossal went up this week in Brooklyn featuring a work by 1980s/90s New York graffiti writer SP One,  who is now better known as collage fine artist Greg LaMarche. The company figures at least tangentially into the street art scene by virtue of the sheer amount of work they provide for a large number of painting artists who create about 300 walls per year, all hand-painted. They even have an apprenticeship program for painters who would like to learn how to do this work. “Big Brush” will be unleashing a slew of new art on walls that are not zoned to be commercial, so they’re actually inching a little closer to Street Art than before.

For his part, LaMarche told us he was pretty blown away as he watched his original small collage go up over the course of a couple of days, painstakingly recreated on this same wall that had the D*Face piece not too long ago – with the view of the Williamsburg Bridge to the right. We can’t wait to see the video that was created, as we hear that some interesting techniques were employed in the shooting. 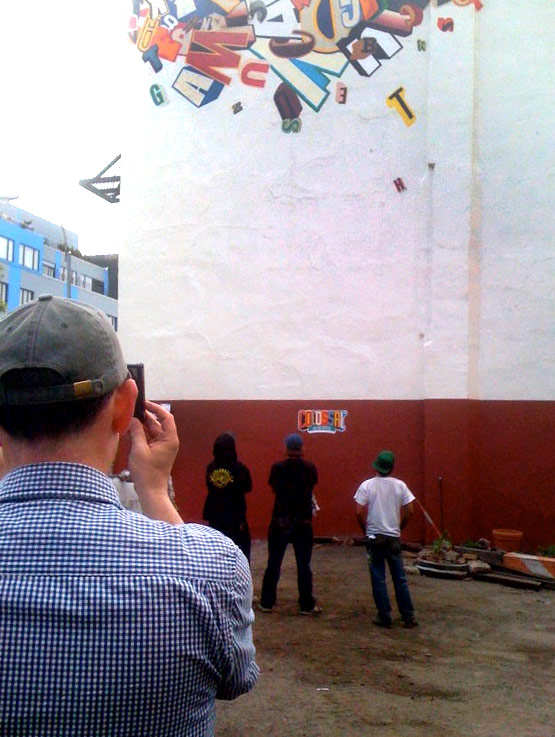 “Basically it’s a re-creation of a collage I made last year – it was on the cover of a magazine from Paris called Graffiti Art magazine,” said LaMarche as he guided himself up and down in a cherry picker to get shots of his work. “So it’s crazy that it was on the cover of that magazine this spring and now it’s on the side of a building in Brooklyn. The last year or two has been pretty amazing. I’ve painted some large murals myself but to have some of my smaller work, the collage work, realized in this larger format is really incredible. 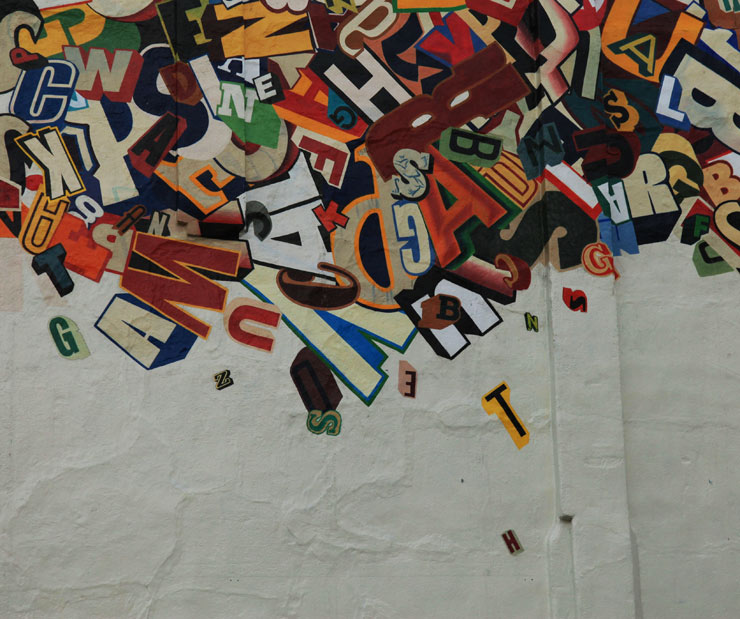 BSA: The original work was made with all hand-cut small pieces that are glued to canvas, right?
Greg LaMarche: Onto a board, yeah. It’s funny because when we did the ratio calculations – the actual piece is 15″ wide by 20″ tall and the way they set this up the width was actually perfect. These guys are professional and they know what they are doing. And artists like this are a dying breed – it seems like there’s no challenge that they can’t handle. 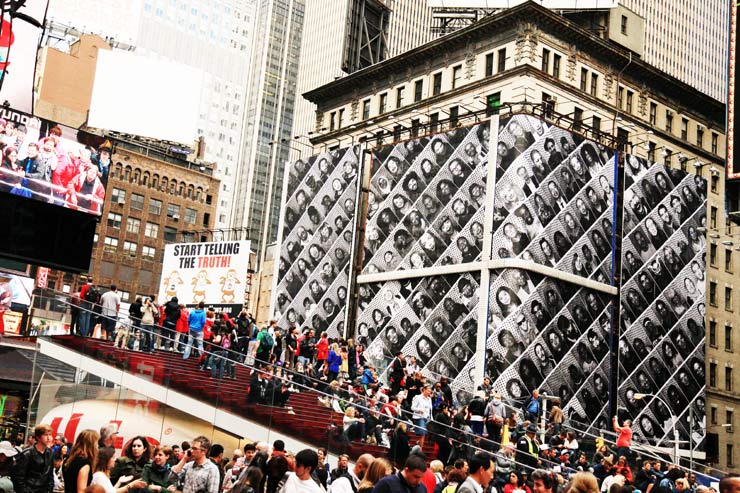 JR. The culmination of the “Inside Out” project that drew to a close Friday in Times Square, NYC. Congratulations to all the volunteers. (photo © Jaime Rojo) 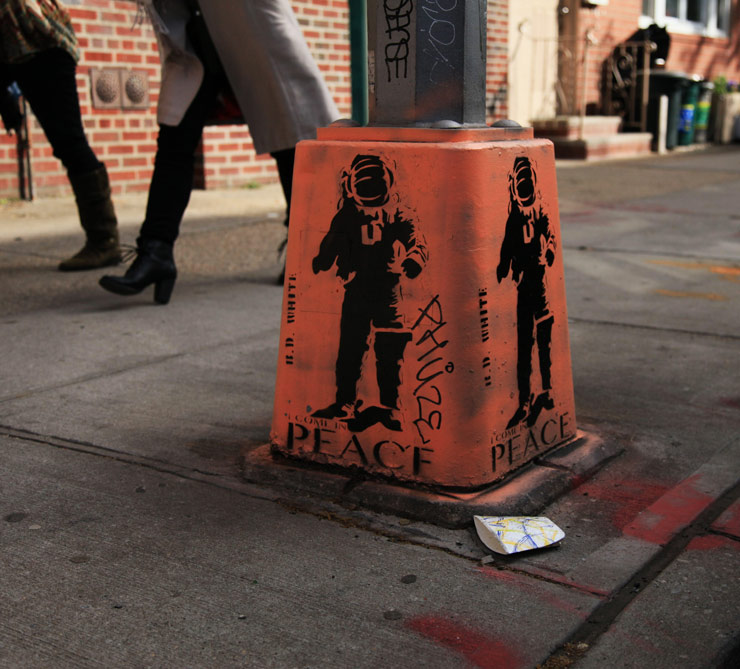 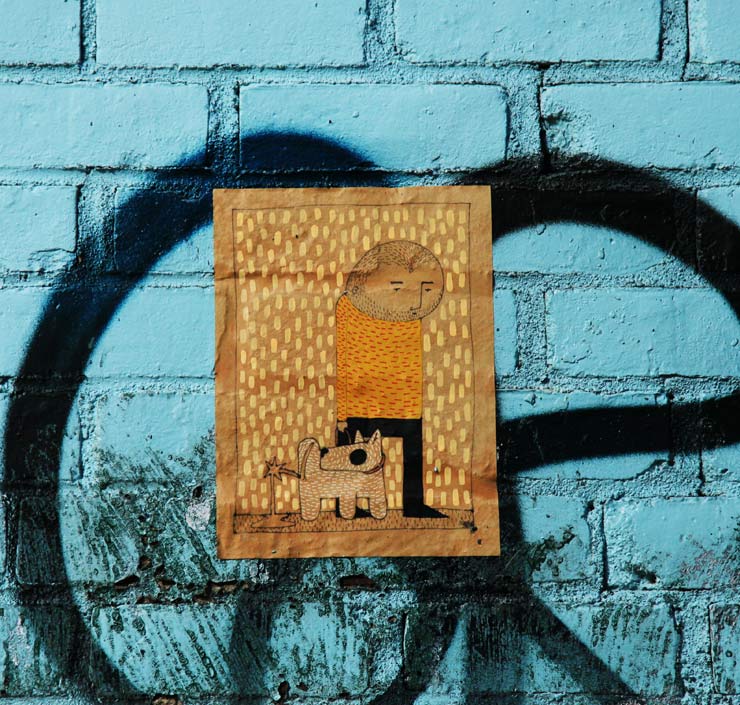 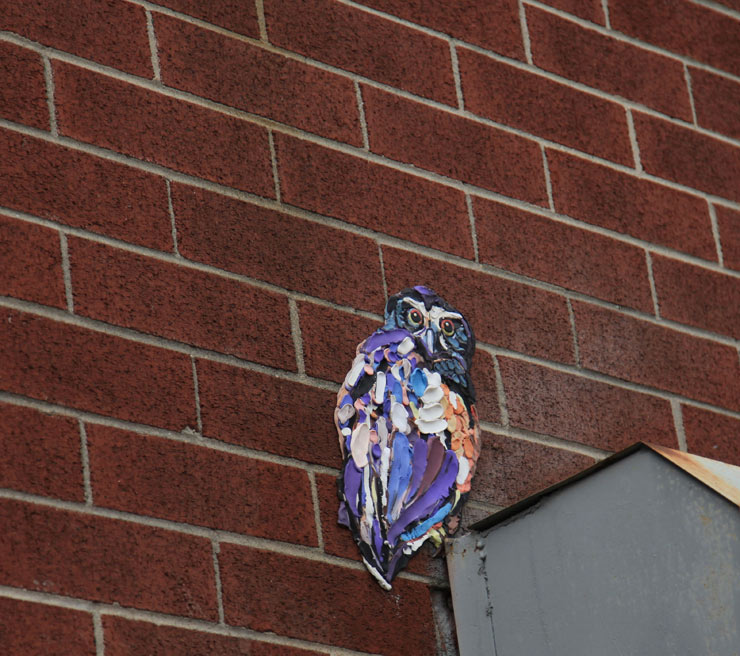 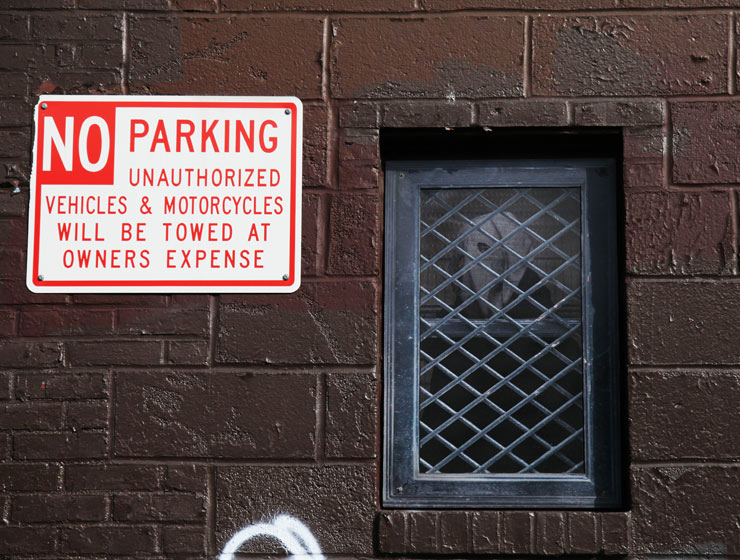 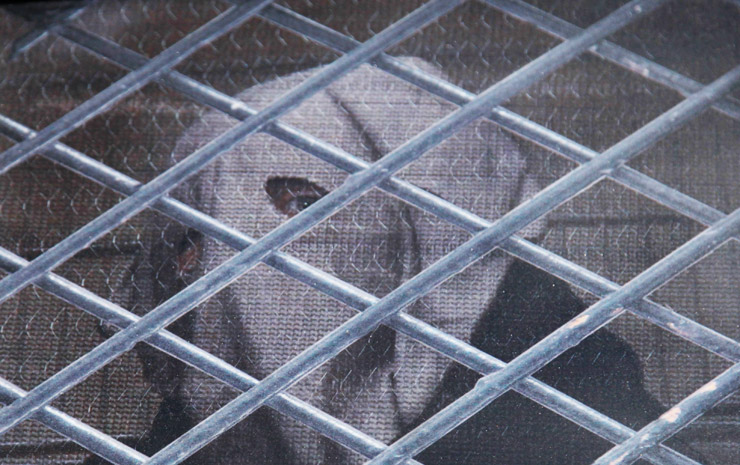 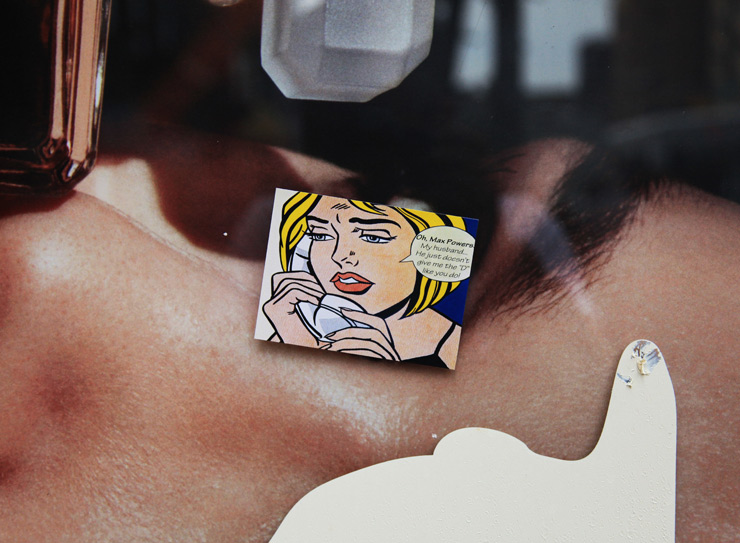 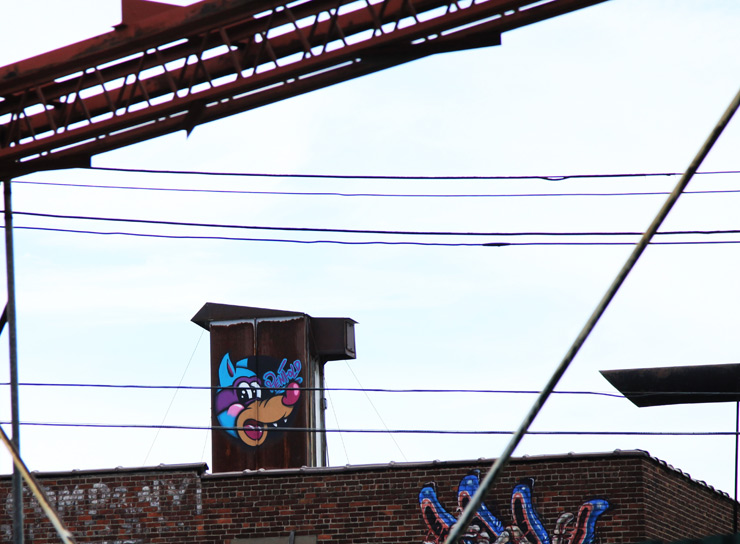 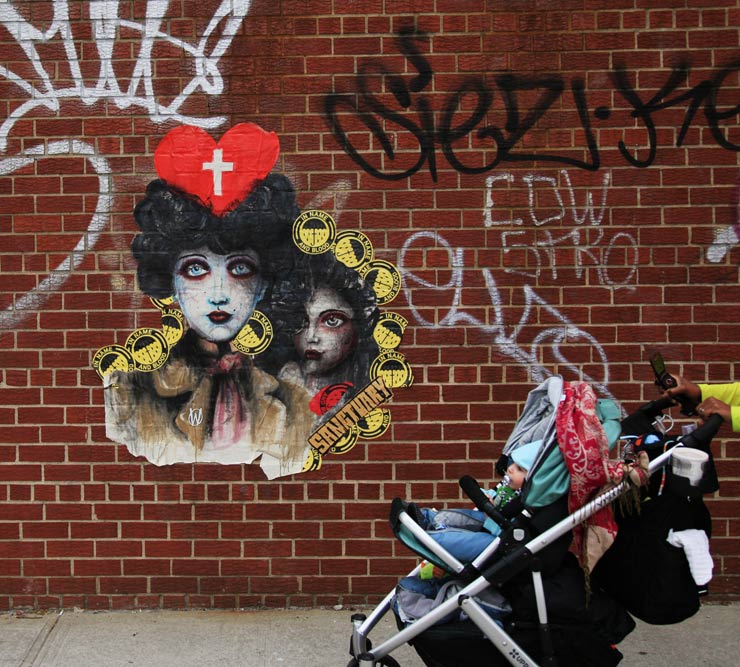 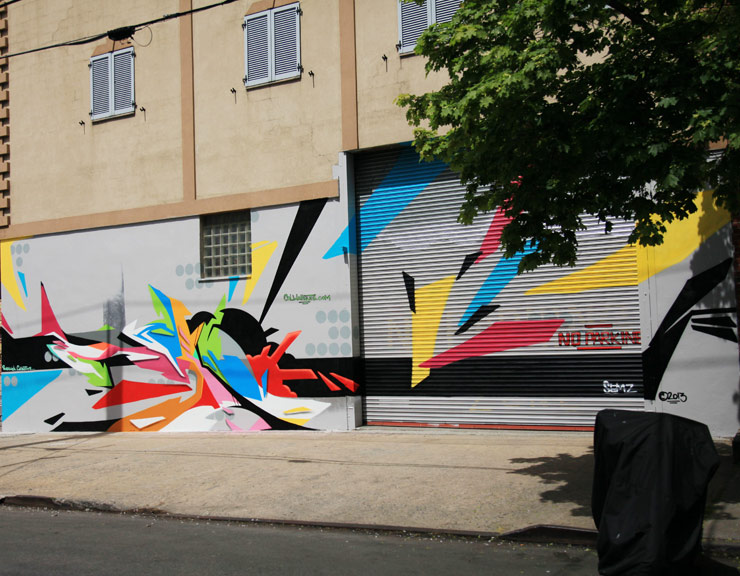 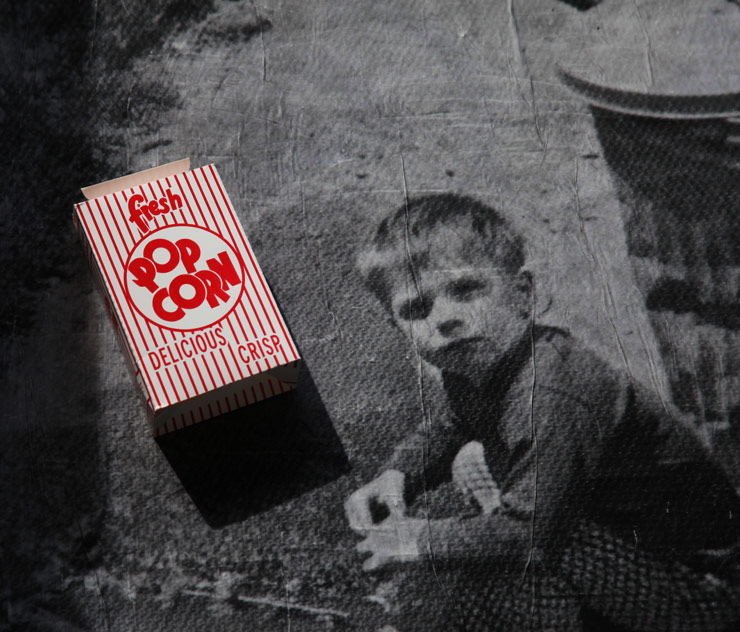 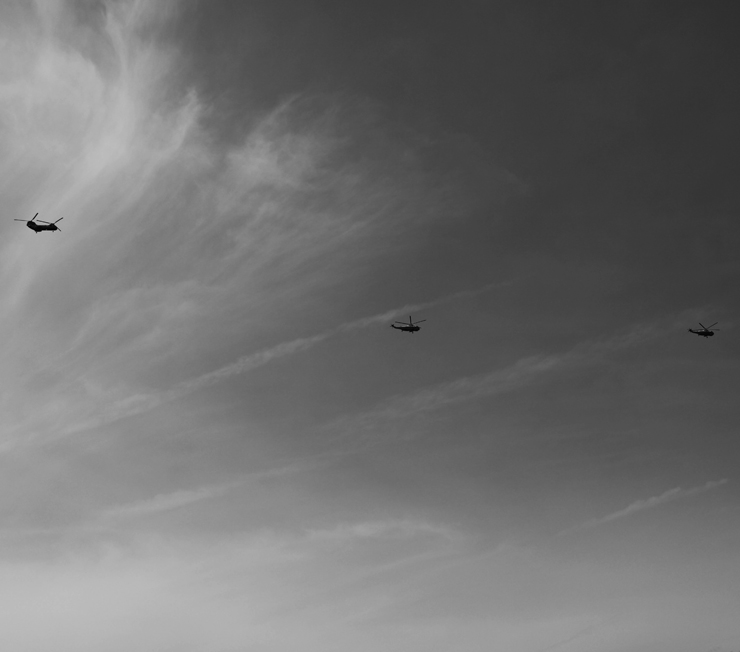 Images of the Week 01.29.12
The streets have been seeing an uptick in socio-political messages recently, whether because of the Occupy protests, or because artists are exercising their speech in low cost, low-tech, person-to-p...
Satirizing the Corporate State with "Hygenic Dress League" in Madrid
Sorry, didn’t mean to drop a caterpillar in your Chablis darling, just wanted to make art that has meaning. In an era of rapid change, three-card monte, and staged misinformation, satire is one usefu...
BSA Images Of The Week: 07.08.18 Selections From Welling Court 2018
"Anxiety is normal in an unjust society" says the new piece by Disordered in Welling Court, Queens, a working class neighborhood of New York where the latest Ad Hoc mural party was held a couple o...
Swoon Flying in "Cicada"
The three-dimensional figures cavort with the thickened and filigreed waves of memory and emotion. They emerge from the wall, flicker across the screen, mesmerizing. Swoon. "Cicada" Deitch Gallery...
Sewing the Walls: Elbi Elem "Gemotrias Variables" in Berga, Catalonia
Street artist Elbi Elem is revealing shapes that are inside this old building in Catalonia- a series of “Variable Geometries”. Elbi Elem. Geometrias Variables. Konvent. (photo courtesy of Elbi Ele...
B.D.White Brooklyn Brooklyn Street Art COL Wallnuts Dan Witz Greg Lamarche Inside Out Project Jaime Rojo Jon Hall JOSEF KRISTOFOLETTI JR Manhattan Mr. Penfold Mr. Toll NYC Steven P. Harrington Times Square W