Last April 24th we told you about a Kickstarter campaign by a 22 year old student attending Rhode Island School of Design (RISD) who was raising funds to make a film about the early days of Shepard Fairey. We always are supporting artists who are following their dream, and Julian Marshall seemed to have the hunger and talent needed to tell the story about this other RISD student and his personal take on art in the streets approximately two decades earlier.

“One morning I was sitting in my bedroom brainstorming story ideas for my RISD thesis film,” he explained on his Kickstarter page, “and staring me in the face was the Andre The Giant poster that Shepard Fairey had given to me when I worked for him three years ago. It was then that creativity struck. I thought to myself, wouldn’t it be wonderful to tell the story of the conception of Shepard’s OBEY GIANT street art campaign from when he attended RISD in the early 90’s?”

Happily, we can report that Julian raised more than twice the amount he had initially sought and today April 15, 2013, his film Obey The Giant is being released.

Directed by NYC’s Marshall, the film is a narrative biopic about the early life of well known Street Artist Shepard Fairey and the origins of his OBEY GIANT street art campaign. Based on the true story of Fairey’s first act of street art, Obey The Giant tells the story of the young skate punk challenging a big-city mayor, screen-printing his own stickers, and pulling a high-profile wheat-pasting stunt that got him fame and into a lot of hot water.

Congratulations to Julian and all the crew and backers for completing their auspicious goal. 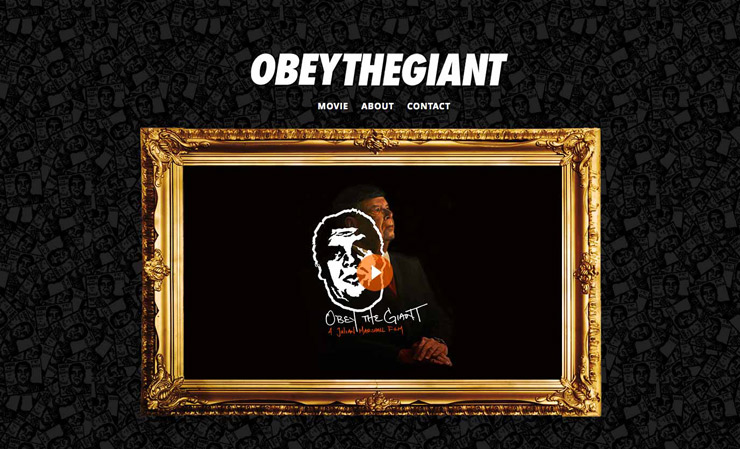 For more about Obey The Giant, please click this link:  obeythegiantmovie.com

A "Secret Dinner" at the Nascent UN in Berlin
Since its explosion of pigment and hue on subway cars and in the streets of New York and Philadelphia a half century ago to its spread to the hundreds of cities worldwide, the truly grassroots movemen...
Destroying Desert Water Bottles; Chip Thomas' New Work in AJO, Arizona
“To raise the call of our faith traditions as an act of resistance against the cruelty and violence that dominate US policy and actions,” says Street Artist and social activist Chip Thomas (aka Jetson...
Paris Dispatch 2 : C215 and the Guys on the Street
We return today to the streets of Paris for Dispatch 2 with Norwegian photographer Tor Staale Moen, who tells us that the streets are alive with stencils and aerosol paintings as much as ever. Ou...
SPECTER and Glowing Abstractions On Your Way Down into the Subway
Yes, you were expecting an ad. Maybe one from News Channel 3 and charming Chuck and beautiful Belinda and that wacky weather guy and the whole 6 O’clock News Team. Instead, you got a glowing abstracti...
SpY Pierces Space: Creates "Barriers" in Ostende, Belgium
Madrid, where street artist SpY is from, is currently covered in its most prodigious snowstorm in years – a feat of nature that takes hold of and transforms our very environment in all dimensions. ...
Brooklyn Street Art Jaime Rojo Julian Marshall Obey the Giant Obey The Giant The Movie Shepard Fairey Steven P. Harrington