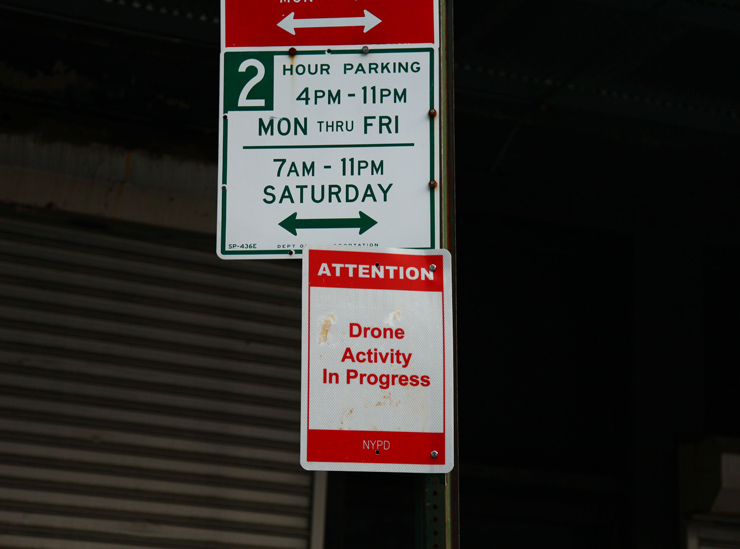 Street Artists use their medium of message on the street sometimes to entertain, engage, or educate the passerby. Whether it’s a personal, cultural, or politically relevant message, often the work provides a mirror for us to look at and examine ourselves. Sometimes the sentiments are seemingly irrelevant, other times prescient. Last year photographers of Street Art, who already had been accustomed to the multiple fake and usually comical “official” messages posted around the city on signposts by Trustocorp, began noticing the street signs that warned of drone surveillance.  Most people had a vague idea of what drones were, but couldn’t see the connection between drones and our streets. This week we had a 13 hour national education when the very conservative Libertarian Kentucky Republican Rand Paul filibustered on his feet about the use of drones in the US and abroad, stirring up a huge controversy about their use that could actually rise to become a genuine crisis for this president as citizens contemplate the constitution and the use of technology like this.

It brings to mind of course the Street Artist and his further work and what may ultimately be revealed as his role as the canary in the coalmine. According to news reports he is still under arrest for putting his art up, and there is a fundraiser for his benefit, and while the major networks talked about his signs when they came out (New Yorker, Complex Magazine, Portland Press Herald, CNN, Fox Business…), you don’t see as much news about it today. Today we feature this mini-doc about Essam and consider the impact of Street Art on public policy and how sometimes it can have the power to advance important conversation and debate. 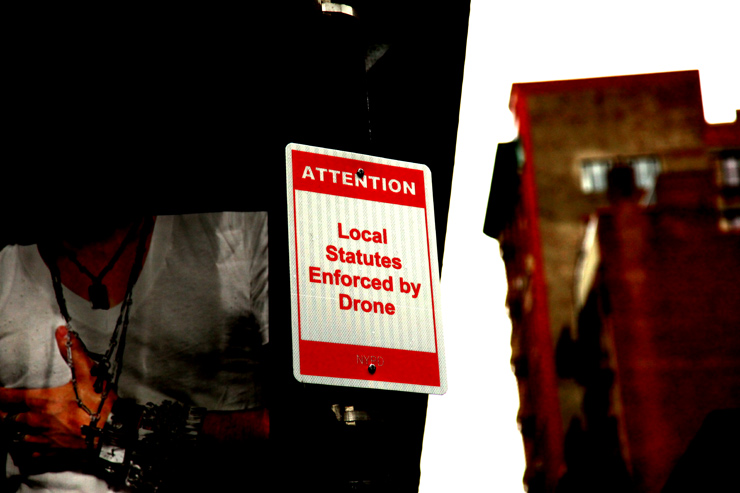 A new mini-documentary on events of the past year surrounding Street Artist Essam and the national and local news coverage it generated.

To read more about this visit: http://www.freeessam.com/

Faring Purth and "Grace" in Forest Park (Chicago)
"A woman's guess is much more accurate than a man's certainty." ~Rudyard Kipling We mention this Kipling quote in this description of Street Artist Faring Purth because a.) she often seems like she...
CRKSHNK Cadaver Blows Nose Behind Porthole: Dispatch From Isolation # 23
These portholes that pop up on walls in New York are often more spooky than you might expect; their framing so realistic, their contents so perplexing. At first these inner views appear as a subt...
Banner Dissent: Protesters Unfurl Anger Inside Guggenheim
Religion and its practices should be voluntary, not mandatory. For some reason historically, it takes men longer to realize this than women. The killing of Jina Mahsa Amini for not wearing a heads...
QRST Sends You Dead Flowers : The Time of the Season
For everything, there is a season. Now that autumn turns to winter we see the remainder of the leaves and the flowers succumbing to the cold temperatures and bitter winds. As an experiment this fall t...
"Where the Wild Robots Are" - A New Mural (and video) by Robots Will Kill at Espeis Outside, curated...
Where are the Wild Things in Brooklyn? Just hang out on the sidewalk. Just spend a day and a half on the sidewalk painting a big mural and you'll be met by a barrage of noise - audio and visual - tha...
Brooklyn Street Art Dega Films Essam Jaime Rojo Jilly Ballistic OverUnder Sheryo Steven P. Harrington The Yok