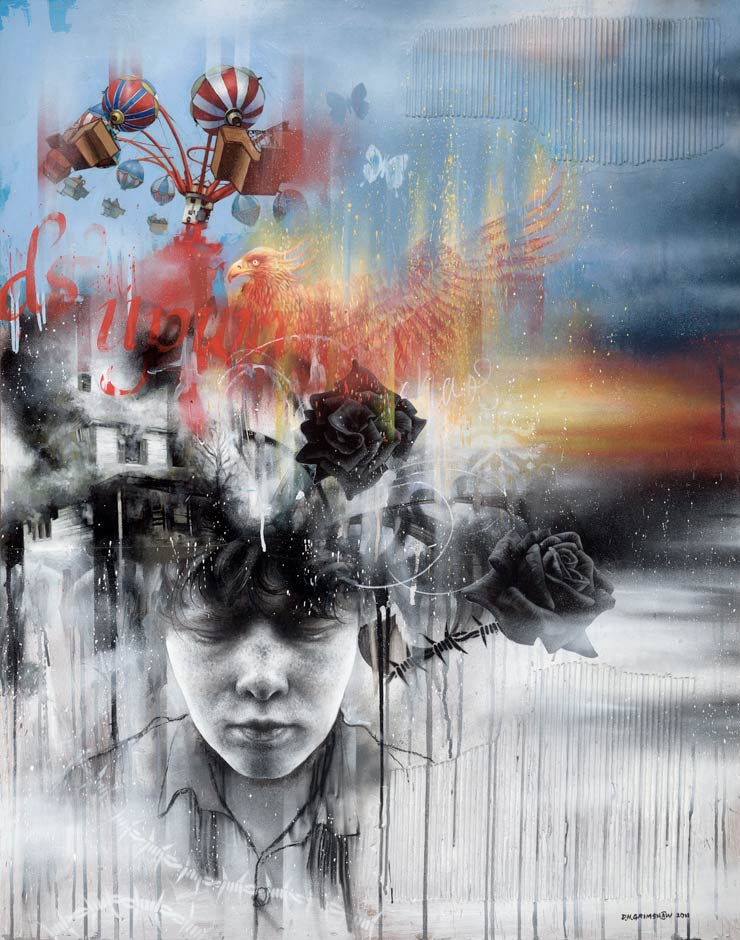 Dale Grimshaw is a dynamic artist calling on powerful emotions and strongly held belief to fuel his creative output.  This tumultuous energy has produced a marvelous series of paintings over the past five years – works that have often been highly personal, but because of their directness and honesty, have succeeded in resonating with very many people.

In his new show, ‘Moreish’ Dale is deeply concerned by the increasingly desperate dance of excess that he sees so many of us jig along to. As the artist says ‘It’s a case of enough is never enough. The ‘haves’ want more and the ‘have nots’ can pay for it. Once we get that acquisitive taste, we just want more and more’.

Indeed much of the imagery references the increasingly overblown world of the baroque, a world that was on a collision course with the French Revolution. There is an underlying sadness, as if the artist is saying that this unsustainable behaviour will surely come to a crashing end at some point soon.

This will be Dale’s fifth solo show at Signal. His work has been seen in galleries across the world, notably in Paris, Rome, Berlin and in the USA. Dale is also getting recognition for his street art. He is now considered to be the leading street artists in the UK to use the woodcut print ‘paste up’ medium. He has also been invited to take part in a number of street art festivals across the UK and Europe, producing large mixed media works in his inimitable style.

THE PRIVATE VIEW IS TAKING PLACE ON 1ST NOVEMBER 6 – 9PM. PLEASE EMAIL US TO BE INCLUDED ON THE GUEST LIST info@signalgallery.com

Situated in the fashionable Hoxton area of London, the Signal gallery is well served by all the main means of transport;

Car
Parking – some very limited on-street is available. There an NCP car park 50 meters away on Paul Street.

BSA Images Of The Week: 08.09.20
Welcome to BSA Images of the Week. If you are not seeing opinions and theories being expressed on social media or raging cable, you can always go to the streets today, as the voice of the peo...
Team Robbo Disses Banksy at Berkshire Prison as He Creates Escape
What is this, 2011? Two things you can count on with graffiti/street art;1. Beef2. Banksy will quite likely wiggle his way into the situation Despite the death of graffiti writer King Robbo in ...
Opiemme Writes Poetry and Letterforms Across Italy
”What do you write?” For decades graffiti writers have been checking out one anothers’ bonafides with this question. Even as tags turned to large complex pieces, evermore stylized through means of ex...
You've Got to Be "Delusional" : Art Competition Prizes Announced
Friendly reminder that the Delusional Art Competition is coming up and if you are going to submit your artwork to this years big shoo with Jonathan Levine Projects you have about 53 days. How Long? ...
No Barriers Dismantle Themselves: JDL Paints "Outside In" - In Rome
Artist JDL has created an enormous split image of the same person in Rome, and the message is one of celebration and acceptance. JDL. Inside In - For the LGBT Movement. Rome. 12-2020 (photo © Bene...
Brooklyn Street Art Dale Grimshaw London Signal Gallery U.K.