Atlanta just finished the Living Walls festival, a collection of 30 female Street Artists who came for 10 days to create 18 new works around the city. The third festival in as many years, the event is equal parts inspiration and perspiration, and with a team of about 60 volunteers and 30 local businesses all working together to support the artists in whatever capacity is needed, it is largely non-commercial.

“You really don’t need much money to do this, just lots of heart and dedication. Taking back your public space, humanizing it, and reactivating it without selling anything to the public, is something that money can’t buy,” bemuses co-founder Monica Campana, and the point couldn’t be a finer one if it were a razor tipped Sharpie. 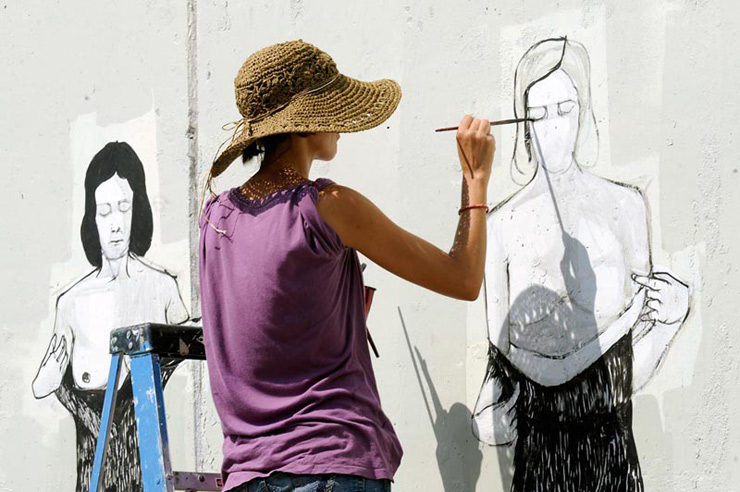 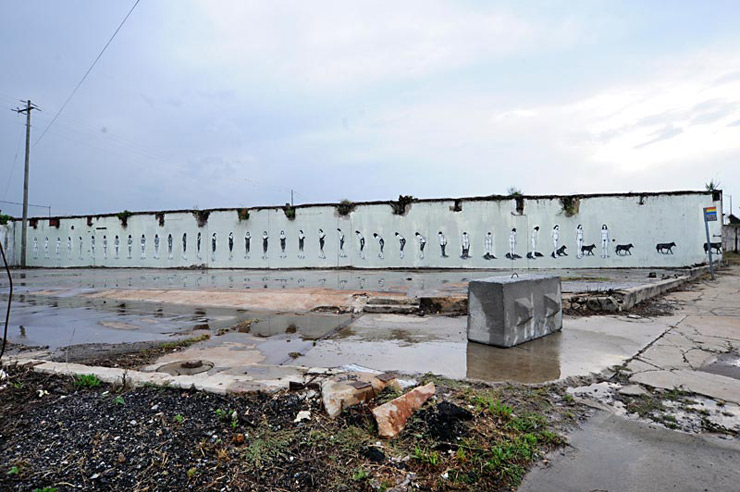 While Street Art festivals are seeming to blossom in cities around the globe that want to enliven the local cultural values (and possibly real estate values), more scrutiny is beginning to be paid by the watchers of the Street Art scene to see if mainstream acceptance will simply mean an enhanced currency stream for opportunists. In some cases Street Art festivals are looking like they’re getting ready to start moving some serious “lifestyle” product as events are being branded by sneakers and energy drinks. Of course, we’ve seen this movie before, along with it’s accompanying feelings of confliction. 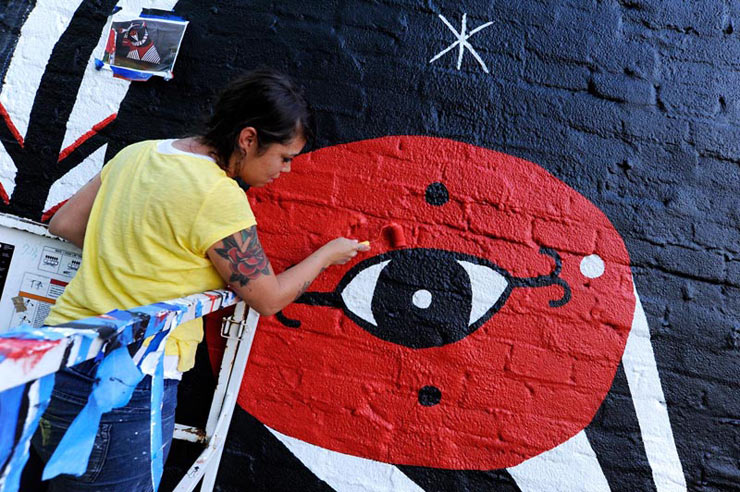 Living Walls has always had as a core component a series of lectures and panels dedicated to education and discussion about the role of art and artists in the public sphere. But that’s not the focus of everyone who throws one of these shindigs. 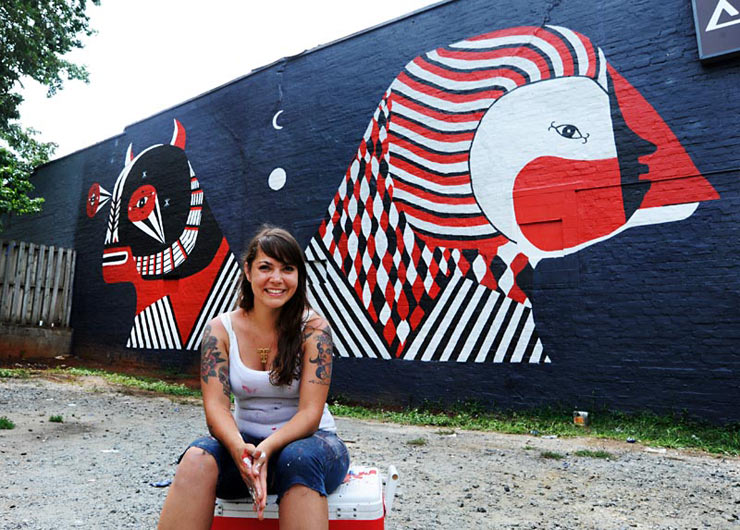 Occasionally a wall in one of these festivals runs afoul of local tastes, as was the case for Street Artist Hyuro, whose line up of a female figure in various stages of undress brought at least one ornery feller out of the woods, or the recent depiction of two bears by ROA in Rochester that reminded some observers of a sexual position known best by it’s numeric moniker. Often you can look at these aesthetic flare-ups as a welcome opportunity for sophomoric jokes by teenage boys, selective umbrage by self appointed morality guards who rush passed the soup kitchen line to wave an angry finger, or the animated outrage of a story-hungry local newsreader reporting live on the scene. For a large part, surprisingly, many of the artists tell stories of Atlanta neighbors bringing food, their kids, sometimes a paintbrush.

For Alexandra Parrish, one of the festivals small army of volunteers, Living Walls and all of the raw youthful enthusiasm of the new D.I.Y. Street Art scene represents hope in an American city that she sees as having been abandoned, drained dry in the face of lowered economic prospects. “Since the 1990s, there’s been an overwhelming creative void in the city, as sort of ‘art-flight’,” says Parrish. “Many who galvanized the art scene in Atlanta left when it got too rough. Then, something like Living Walls comes around – with no money, no rhyme, no reason, in the midst of an urban sprawl least likely to care.” 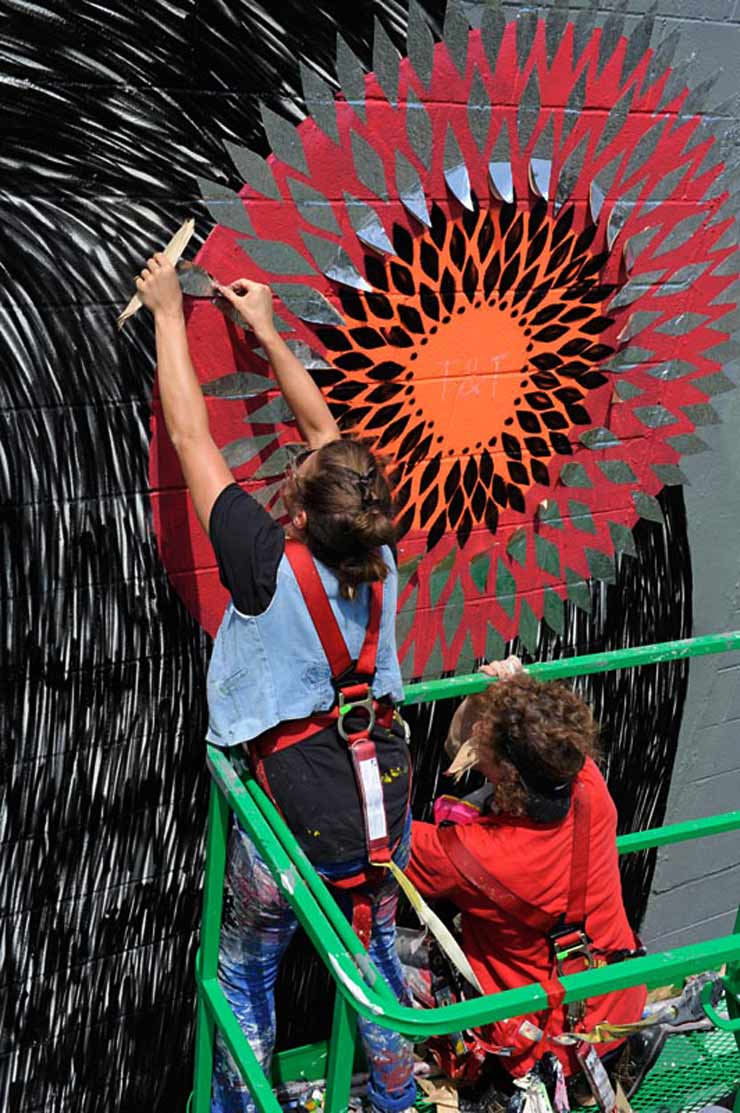 In an economy that also feels abandoned and ever shifting downward in search of a new baseline, you can see a certain jadedness in the Millenial generation you wouldn’t have seen a few years ago, but here is a new ruggedness too.  Alexandra looks at the attitudes and the relentless efforts that a loosely woven group of art kids have made with little funding to create a genuine lifeblood. “Three years later, with the help of countless local businesses, foundations and individuals, it is overwhelmingly clear to us that yes, people do care.”

Here’s the evidence, an onslaught of walls shot by the dear Ms. Martha Cooper and expressly picked by her for BSA. We’re happy to share the bounty with you and this small interview with Monica. Ultimately these are fruits of labor by some who didn’t wait for permission to create a scene. It should be a surprise that they are accomplishing something that many urban planners and masters of industry have found illusive in cities during these harrowing economic times.

Says Parrish, “Our scrappy organization has somehow put Atlanta back on the map.” 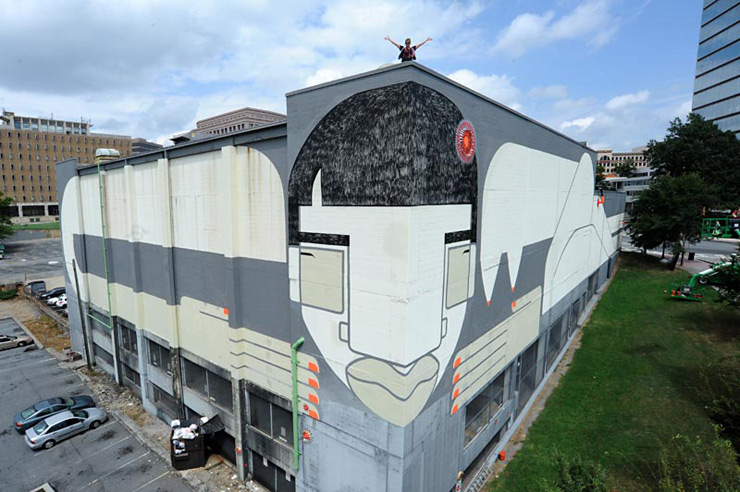 Brooklyn Street Art: Because you worked closely with the community and a large team of volunteers, do the artists feel welcomed to the event?
Monica Campana: Living Walls is an all-volunteer organization of about 60 people who act as staff or artists assistants – whatever role is needed. There are also about 30 different local restaurants that helped feed the artists during their 10-day stay in Atlanta, not counting the sponsors who hosted the artists and events during the conference. So many people are a part of each conference every year that it truly makes it a community project.

The whole city wants to welcome the invited artists, and during production week everyone will try to make an effort to make the artist feel welcome. Sometimes they show up to the events we are hosting or stop by the walls with water or food. During a giant family-style dinner given by a friend, one artist told me that she had heard we were nice in Atlanta but she was really not expecting this level of nice… I guess we really reinforce the “Southern Hospitality” concept here. 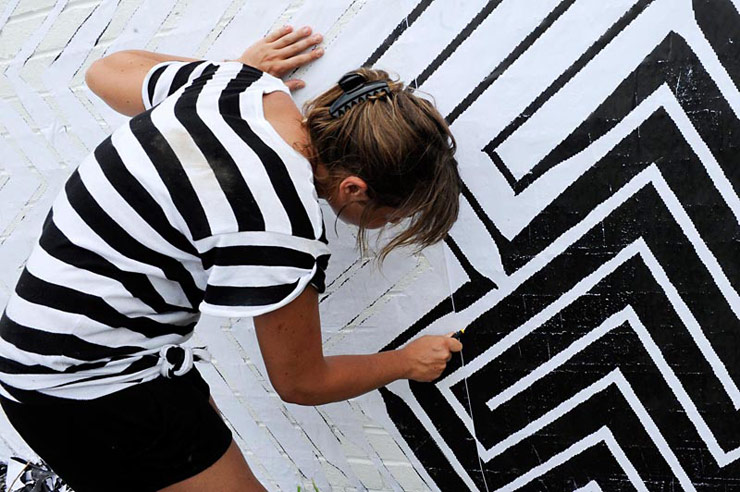 Brooklyn Street Art: How are festivals like this going to affect the greater Street Art scene, given that they are large, organized, and authorized?
Monica Campana: Festivals of this kind are definitely affecting the street art scene, positively and negatively. I believe that as long a street art festival works with its community, educates, promotes conversations in their communities about street art/graffiti origins and its motivations, as long as it reactivates spaces and helps create community, then it’s all good. Street art should remain illegal, but I also believe that organized street art festivals can help as a platform for dialogue about this craft. 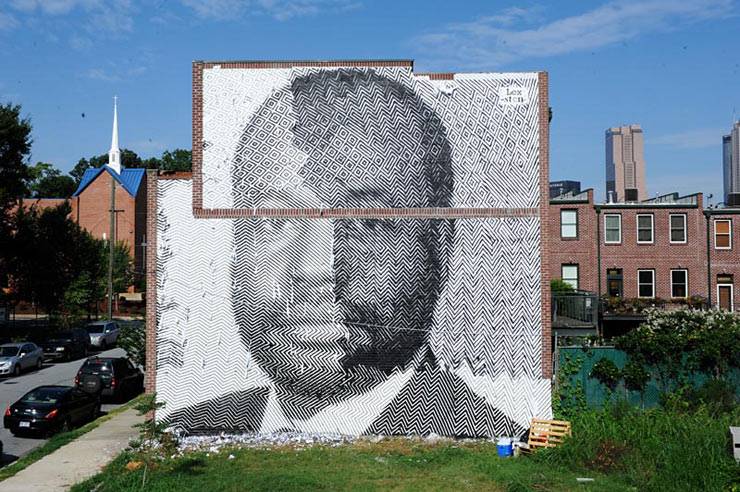 Brooklyn Street Art: Organizers spoke initially of this being the first and largest organized festival of female street artists together. Does that include festivals like the “B*Girl Summit” in 2005 and the rest of the “B-Girl Be” events of the late 2000s ?
Monica Campana: When we decided to mainly focus on female street artists for this year’s conference, we researched as much as we could to see if this had been done before. We found art shows, showcasing only girls in the street art world – we found graffiti jams only showcasing female graffiti writers- we found b-girl festivals – but we were not able to find a street art conference that showcased only women.

This was a conference with 5 days of events, the creation of 18 pieces of public art, and lectures discussing urbanism and gender roles in public spaces. Living Walls 2012, focusing on only female street artist, was the first of it’s kind as of yet – and hopefully it’s not the last one. 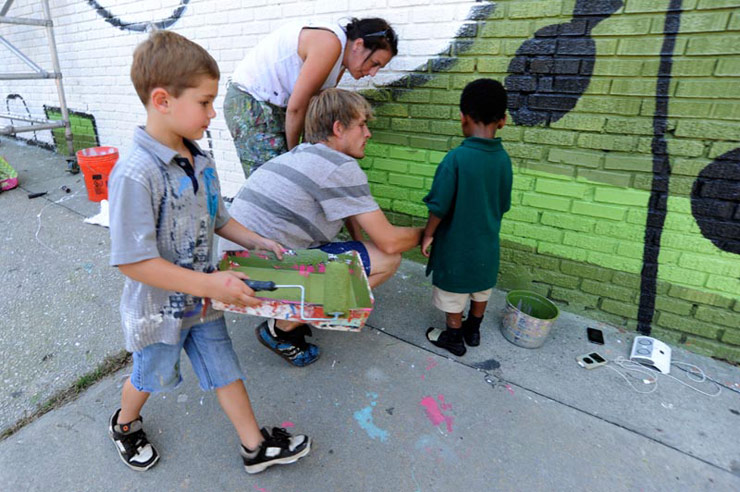 Members of the Atlanta community helped with a number of murals, like this one by Olive 47 (photo © Martha Cooper)

Brooklyn Street Art: Having primarily women on the scene this year, how was the work and the environment of Living Walls Atlanta affected?
Monica Campana: Working with primarily female artists gave LW a very different sensitivity. I don’t want to sound stereotypical, but in the past the guys have been more wild than the girls. This year it was amazing to see how the girls would wake up early, stick to their schedule, would be more aware of keeping things cleaner and safe.

The work on the streets also had a different feel and artists experimented with new materials, like yarn, colored powder, balloons and even hair weaves. Some murals even continued from their walls onto the ground. I feel like this year the artists wanted to push themselves more and experiment with their space in new ways. 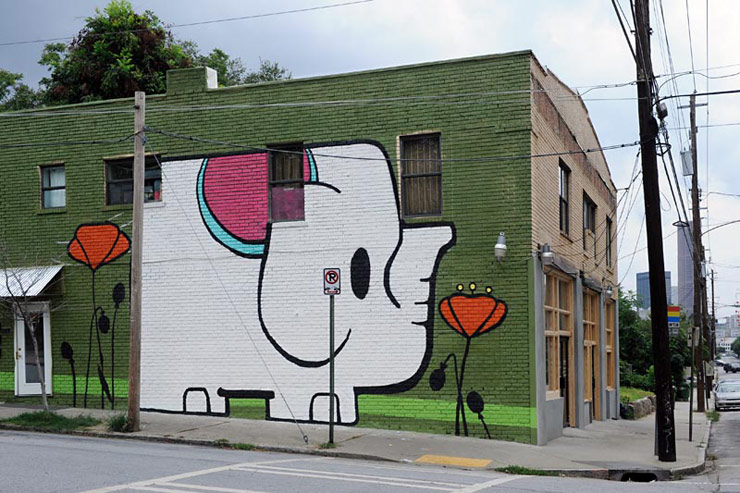 Brooklyn Street Art: Are you up for another year of Living Walls?
Monica Campana: Yes! This is the first year that I finished the conference wanting to start the next one right away. Every year it is so hard and so much work but we really are a family, and I cannot wait to continue working with everyone and planning for the next conference. I’m motivated by so many motivated and talented. We’re already planning to have next years desired lineup by this October. 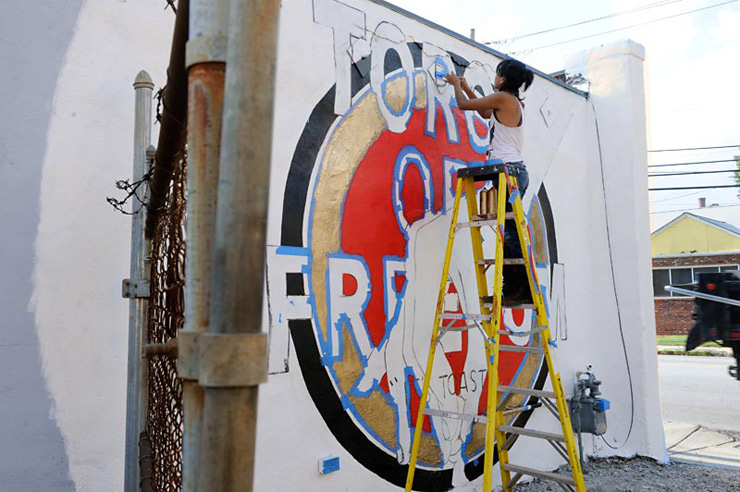 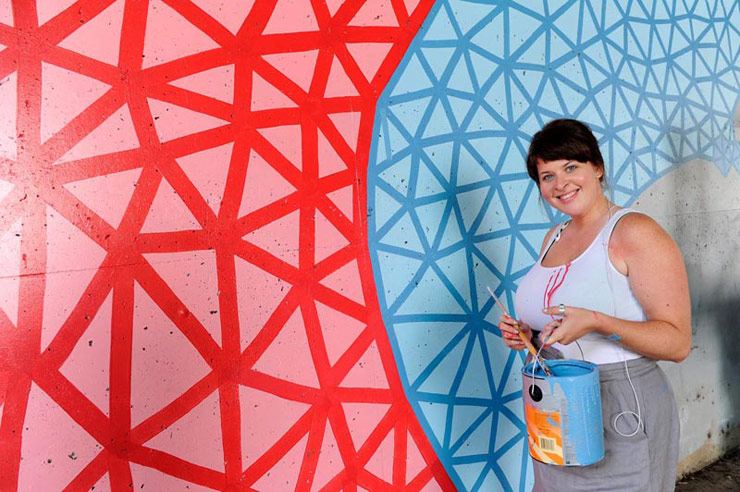 “Every day I wake up thinking about all the art we are putting on the streets, all the conversations being sparked by the art, all the love and hard work each artist puts into leaving something so great in our city.” – Monica Campana 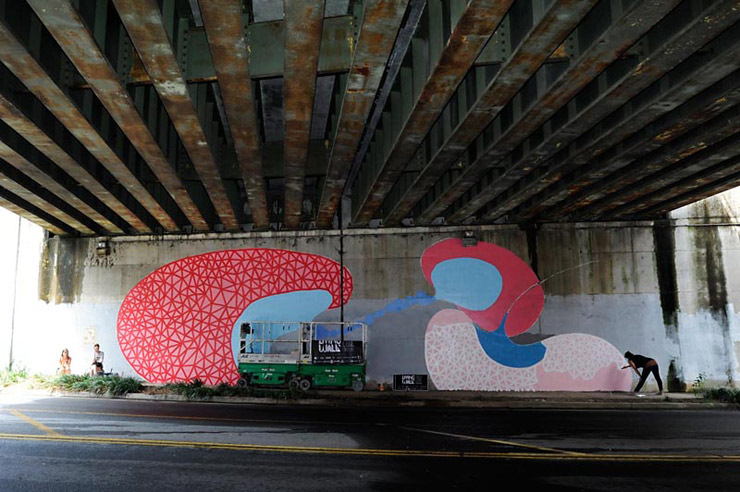 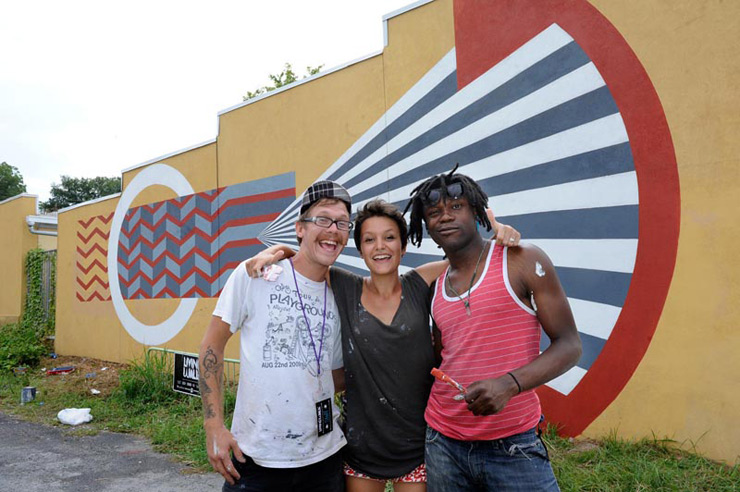 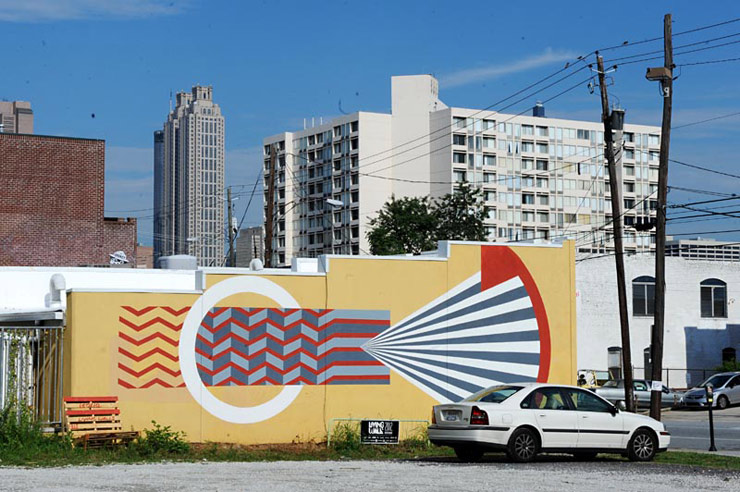 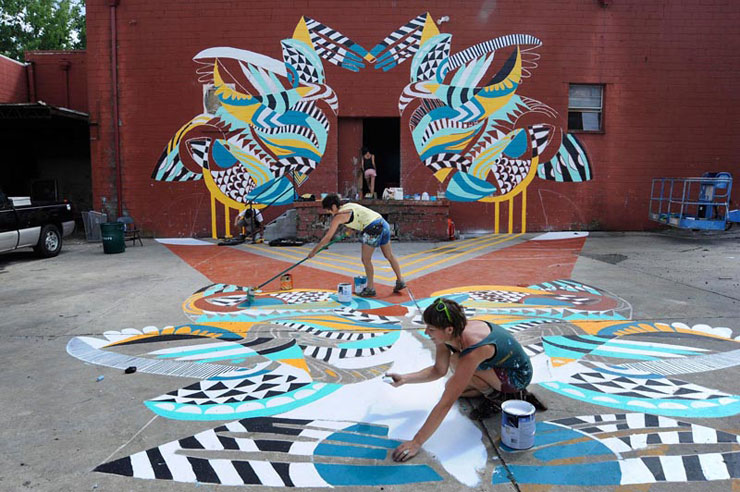 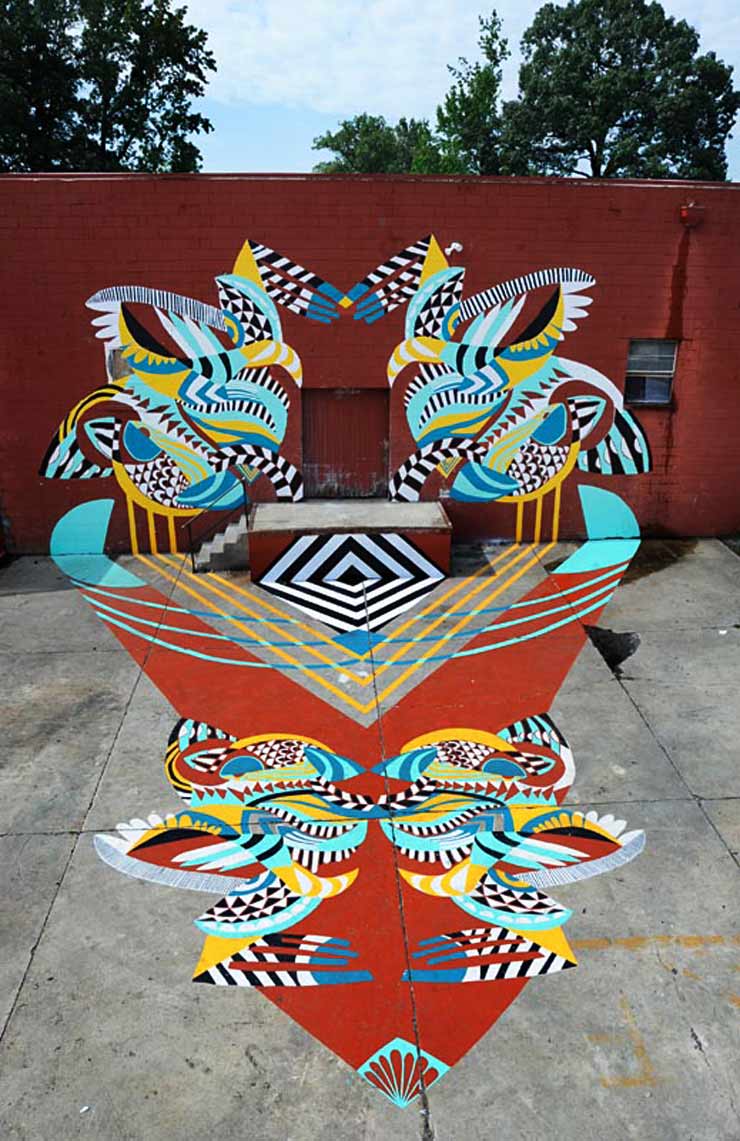 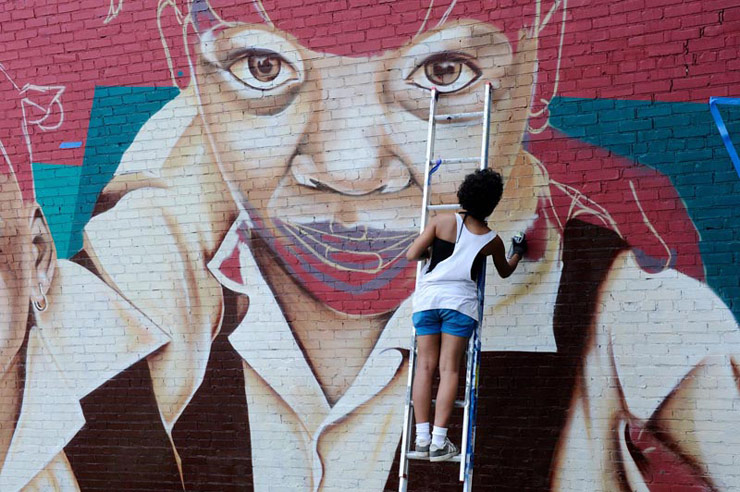 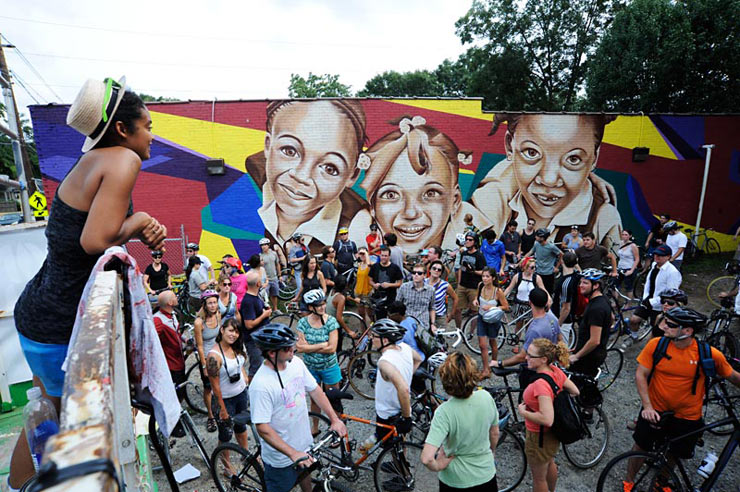 “It is a great feeling to know that we might be inspiring others. Here is the thing though…what Living Walls does for Atlanta, it can be easily done in any other city. I encourage everyone that wants to promote street art and the creation of new public spaces in their communities to do something like Living Walls.” – Monica Campana 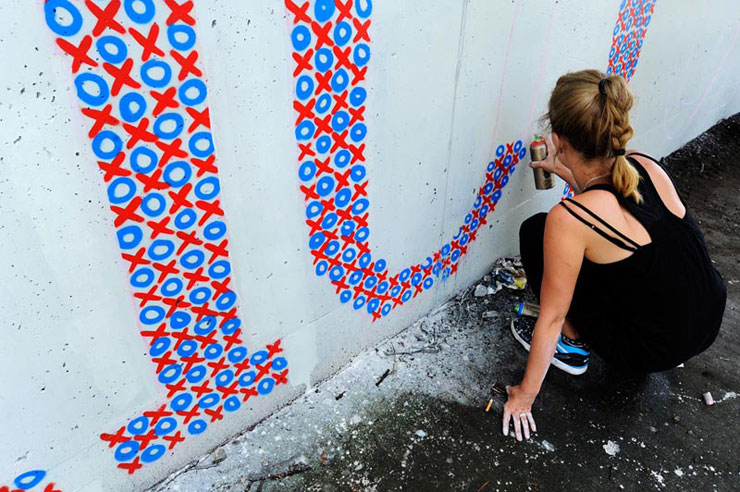 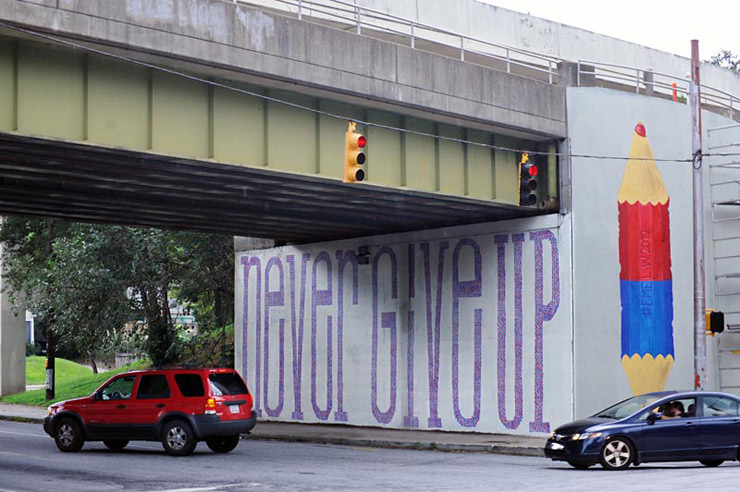 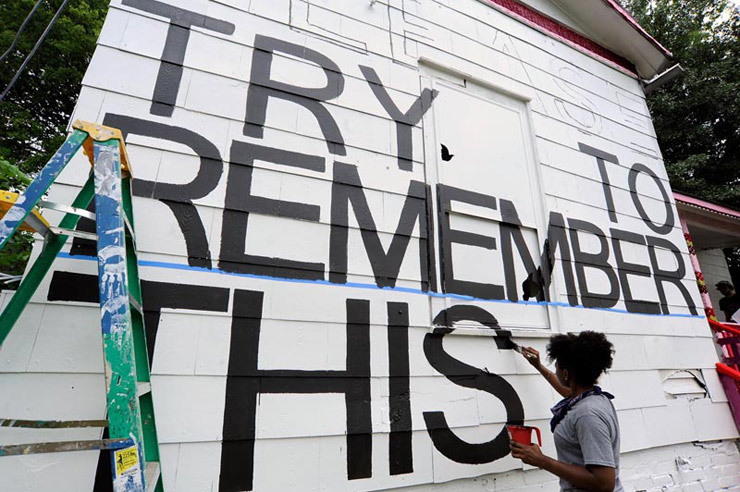 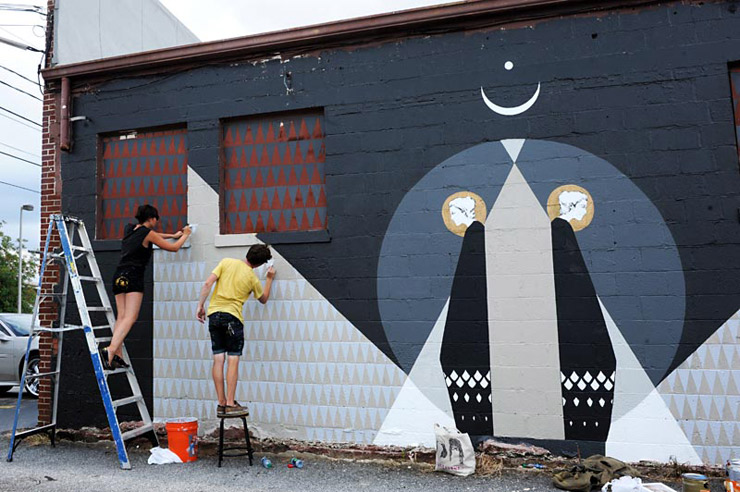