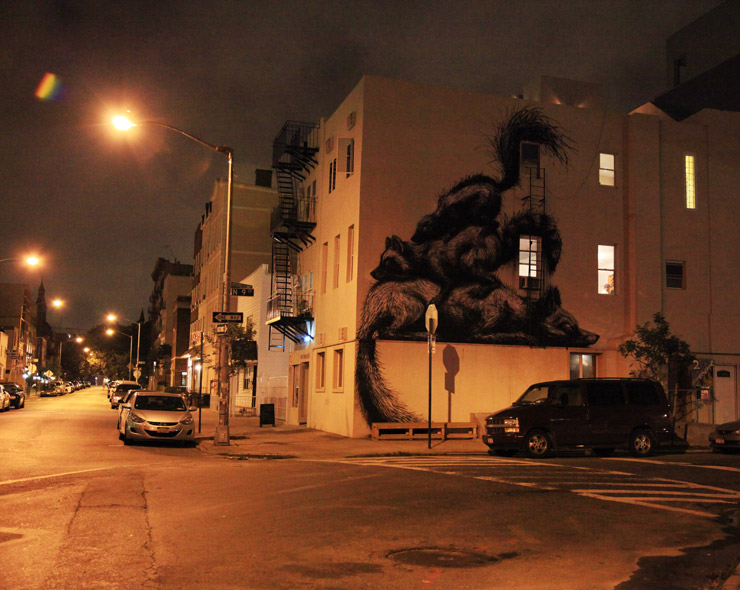 941 Geary is pleased to present “Dominant Species,” making San Francisco the latest home to ROA’s talent for the first time since his solo show at White Walls last year. “Dominant Species” will open Saturday, September 15th, from 6-9pm, with the exhibition free and open to the public for viewing through November 3rd, 2012.

Belgian-born artist, ROA, is known for his striking, and expressive depictions of animals, often stretching to multistoried heights. Even when not massive in scale, ROA’s animals are massive in impact, created with vivid details and the keen eye of a naturalist. Through a focus on local species, ROA reintroduces species that have been forced to the outskirts of urban areas back to the land they once inhabited freely. With this selection of creatures natural to the area, ROA is able to create a powerful sense of intimacy between the viewer and the animals represented. ROA’s paintings often show multiple anatomical layers of the same representation. The work is interactive and the depicted animals can be manipulated by the viewer.

ROA cemented his reputation as one of the world’s most prolific and recognizable street artists by painting members of the animal kingdom throughout major cities of the world, including Mexico City, New York City, Los Angeles, London, Paris, Sydney and many more. His work has now become a global affair, reaching between the Andes and the coast of Chile, the Australian Outback, the African Savanna, the Asian tropic, the American prairie and back to the abandoned factories in the backyard of his hometown in Belgium.

ROA’s “Dominant Species” is his latest body of work created directly after his road trip from the East to the West of America. Driving through the states he experienced and observed a diversity of habitats and species, including the American eagle, the historic symbol of imperialism. Even the icon of the American country is endangered by nature’s most combative intruder: humans. “Dominant Species” refers to humanity aside the history of the States, from the Spanish conquest that consequentially, and brutally, changed the native life up to the contemporary human invasion of the landscape. Travelling throughout the tragically magical landscape of Northern Arizona, ROA was fascinated by the illustrative examples of the Good, the Bad and the Ugly, seen in the paradox of the harmony of the Navajo with Mother Earth alongside the chaos of commercial feed lots, bear hunting, and landfills.

ROA’s site-specific process gives his art the ability to conform to the dimensions of a space and grow from within it, and 941 Geary will be entirely used by the artist to create his installation. “Dominant Species” will be constructed from found objects and salvaged materials, with the large-scale installation guided by a dystopian narrative and ideas of how civilization can run down the land it grew from. Aging wood, rusting metal and skeletal remains come together to remind us of the interrelated workings of our manmade cities and the natural world, with ROA’s mastery of anatomical form and beautiful renderings making these discarded objects something to value anew.

Faith47: "Aqua Regalia", Mundane, Sacred
The mundane is made sacred in the full-wall alter created at the back of Jonathan Levine’s gallery for the first solo New York show by Faith47. Small collected ephemera is displayed in groupings of si...
Barlo "Upside Down" in Hong Kong
Street Artist Barlo sends us this mural he did in his hometown Hong Kong in the back of a bar that features caricatures sculpted of Mao, Stalin, and Hitler – which gives you an idea of what sorts of r...
Cane Morto in Txakurrassic Park (Video & Poster) / Dispatch From Isolation # 46
The idea that the boys of Canemorto are in danger is both repelling and dinosaurian. But the paint-roller free thinking rapping brutalists of Italy are staying safe in quarantine, thank Dios. But...
Meres One Says "Love Is Love"
When a real graffiti head hits you in the heart, you know it's going to burn brightly. NYC writer Jonathan "Meres One" Cohen has been getting up on the streets for 3+ decades with his distinctive ...
What's In the Box? An Unusual Graffiti / Street Art Show Opens in NYC and Worldwide
An unusual worldwide quarantine requires unusual solutions. Because the virus is preventing us all from going to a gallery show at the moment, it's been fun to see artists, museums, galleries, galler...
941 Geary Gallery Brooklyn Street Art CA Roa San Francisco