As New York marks the 11th year since the September 11 attacks on our city, a sort of solemn sadness was evident on the subways and on the streets this morning, or maybe we’re just projecting our own sadness and feelings of loss.  In those days afterward it felt like we had put down our differences and unified in our sorrow and our determination.  We were changed by those events, and are still learning from them.

Now in 2012, news organizations are estimating that 6 billion dollars will be spent during this presidential campaign. “17 angry old white men will wake up and realize they’ve just bought the country,” said Senate Majority Leader Harry Reid this summer. He was referring to our new system that for the first time enables anyone from anywhere to contribute as much as they want to a campaign and do it secretly. Free speech sounds pretty expensive, and we don’t even know who is speaking. 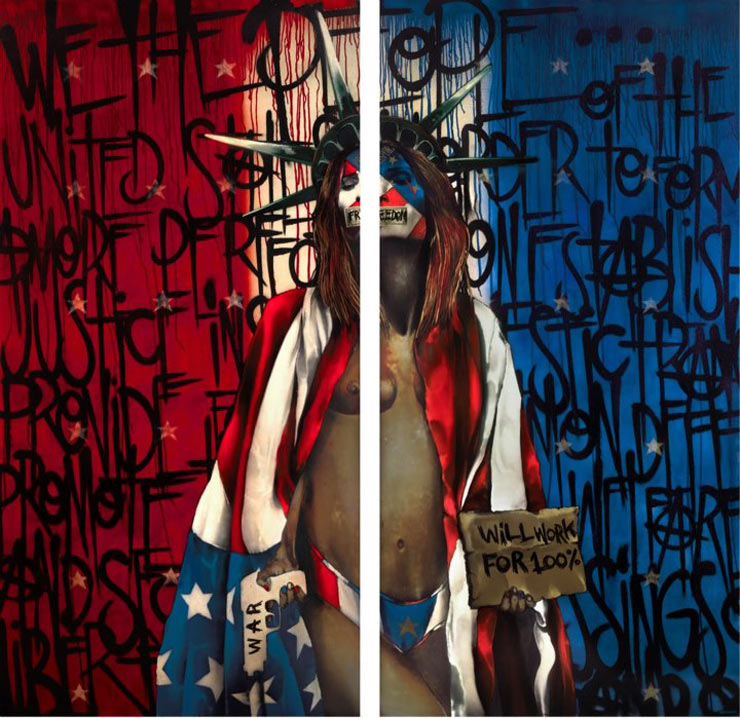 “How do we revive Lady Liberty from suffocation of war, pain and inequality?” Chor Boogie

Coinciding the release of the paintings with the just concluded theater of the Republican and Democratic national conventions and anticipating the upcoming debates, Chor wanted to emphasize what he sees as our current and most pressing problems that directly and daily affect the lives of American citizens such as immigration, energy resources, poverty, class and the erosion of liberty and democracy. The collection is full of plain symbols and texts that can stir emotions and opinions and will be on tour through the US leading up to the elections, encouraging people to speak up and debate the issues that are not always talked about by the politicians and that definitely are are not always easy to grapple with.

Politics and art are frequently strange bedfellows because meanings are open to interpretation, and invariably passions are inflamed. So be it, Americans can handle a good lively open debate, with respect for others and their opinion. That’s how the system was supposed to work. 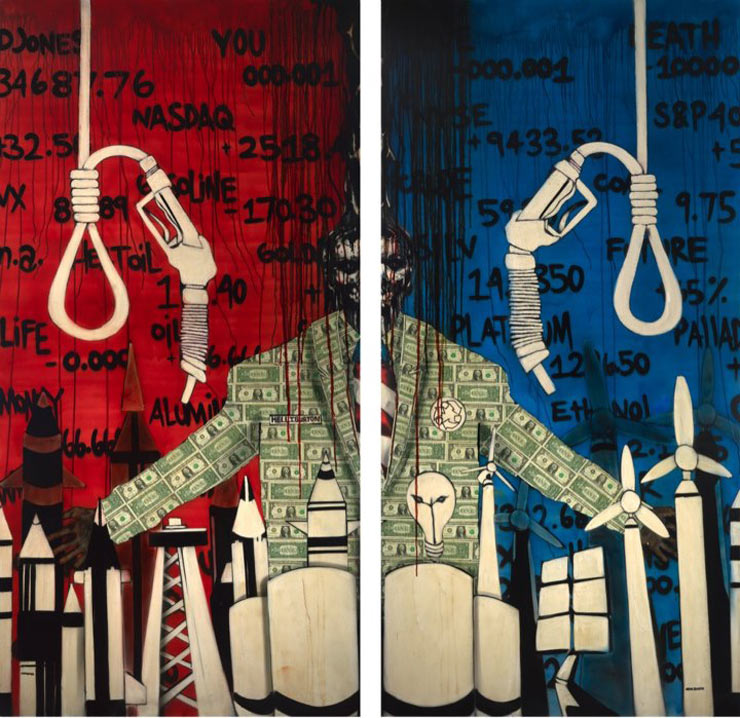 Chor Boogie “Pain at the Pump” (photo © courtesy of the artist) 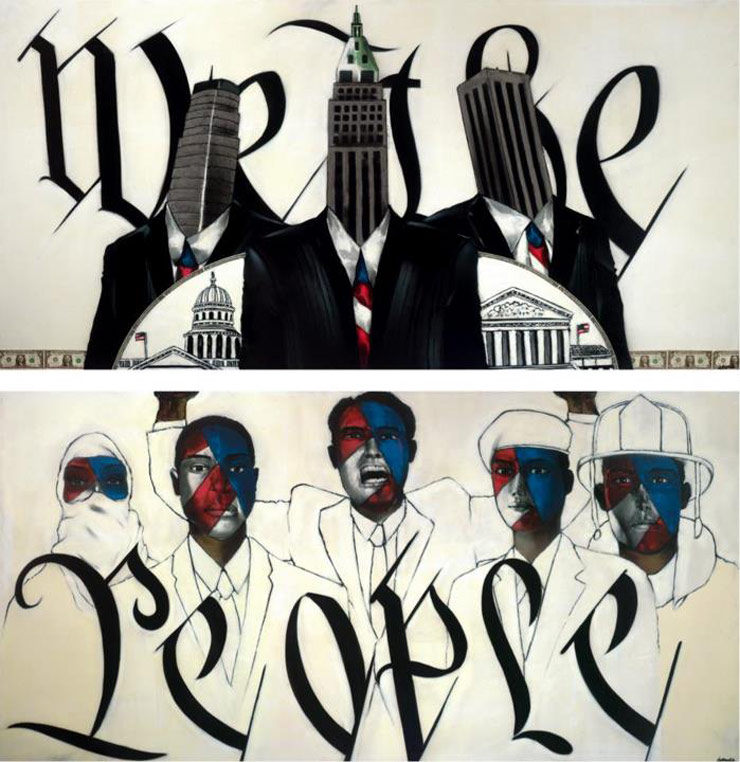 “How do we restore the voice of the people as the political authority in the United States?” Chor Boogie 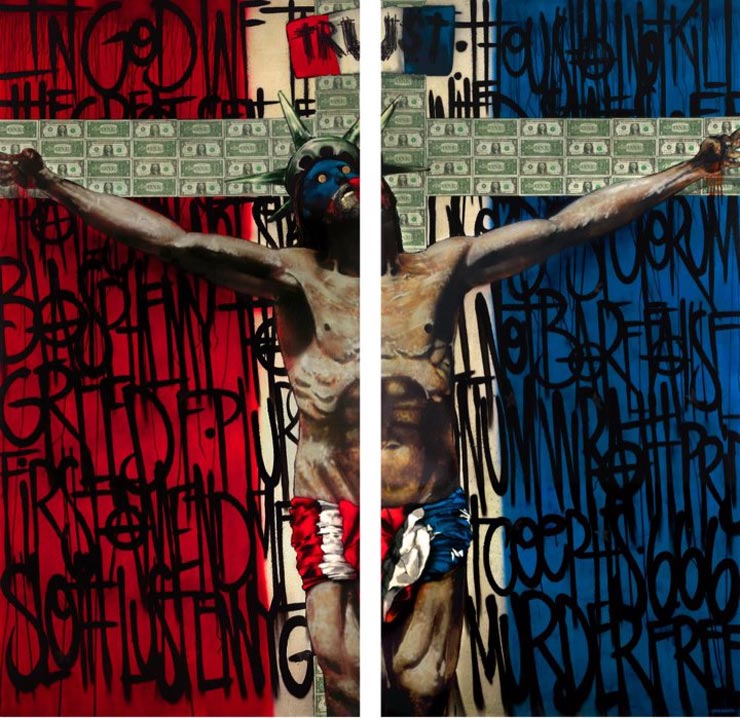 Chor Boogie “The Ultimate Sacrifice” (photo © courtesy of the artist)

“How do we recapture our faith in American values, and forsake our fanatical lust for money and power?” Chor Boogie 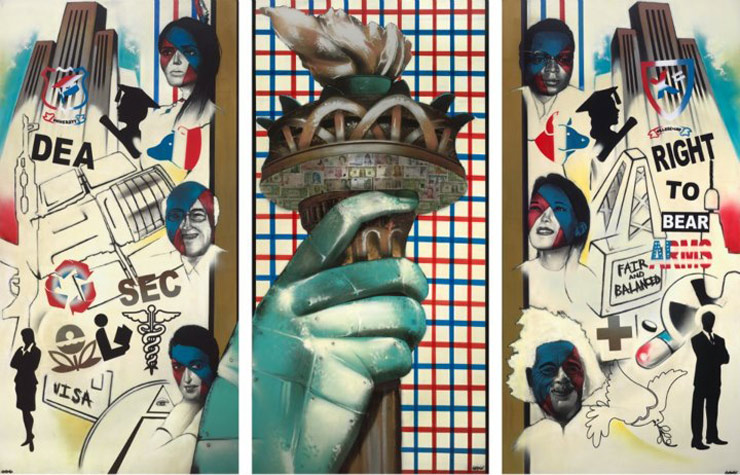 Chor Boogie “The United State” (photo © courtesy of the artist)

“Will we plot the right course to bring America from divided to united?” Chor Boogie

Chor Boogie works and lives in San Francisco. His more abstract work will be shown at GEOMETRICKS opening on Sept. 22 in Brooklyn, NY. Click here for more information on GEOMETRICKS.