Two Street Art brothers, Icy & Sot, born in Iran and encouraged by their parents to pursue their dreams and aspirations have ventured outside their country and landed in New York, their first foreign trip, their first international city, their first art show in which they were able to attend. “Made in Iran” is now open to the everybody at the Open House Gallery in Manhattan. 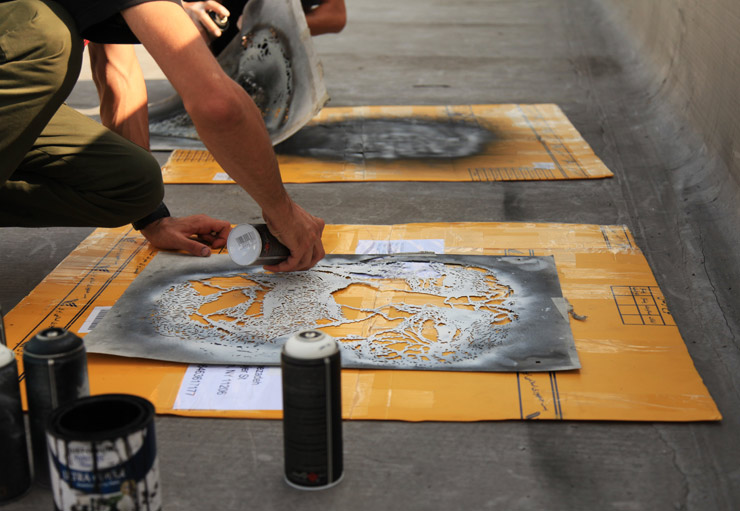 The University of California, Berkeley Art Museum and Pacific Film Archive (BAM/PFA) mid-career survey of San Francisco based artist Barry McGee.  From the press release: “Using a visual vocabulary that borrows elements from comics, hobo art, sign painting, and other sources, McGee’s work addresses a range of issues, from individual survival and social malaise to alternative forms of community”. This exhibition is now open to the general public. 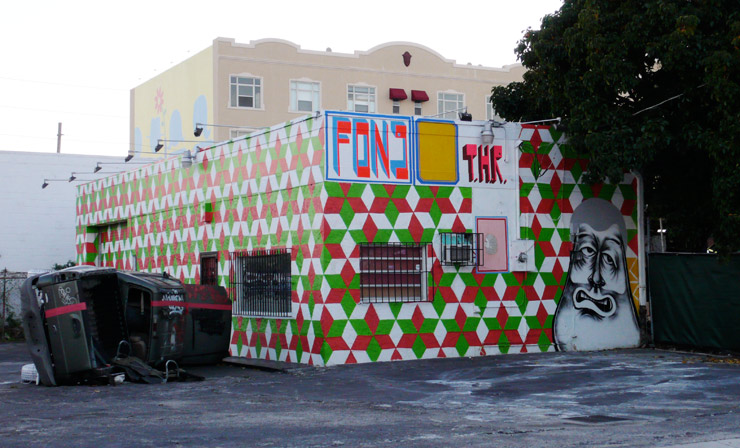 Junior, what up with the car? Barry McGee in Miami for Primary Flight 2009 (photo © Jaime Rojo)

Detroit native BORF has traveled to England for his solo show “Walls Are Two-Sided” at The Outsiders Newcastle. With this new body of work, Borf illustrates the derelict aspect of Detroit and elevates the decay to art by zeroing in on a detail of the building’s peeling and corroding facade and transporting that vision on to the canvas. The result in the words of the press release is: “Rothko talked about wrestling with opposing and competing elements to eventually discover an equilibrium, what he called a pocket of silence” says BORF. “For this show I was fighting through layers of ambivalence and opposites: graffiti as youth expression and Rothko as adult expression; the art market and property rights; education and improvisation, youth and adulthood.” This show is now open. 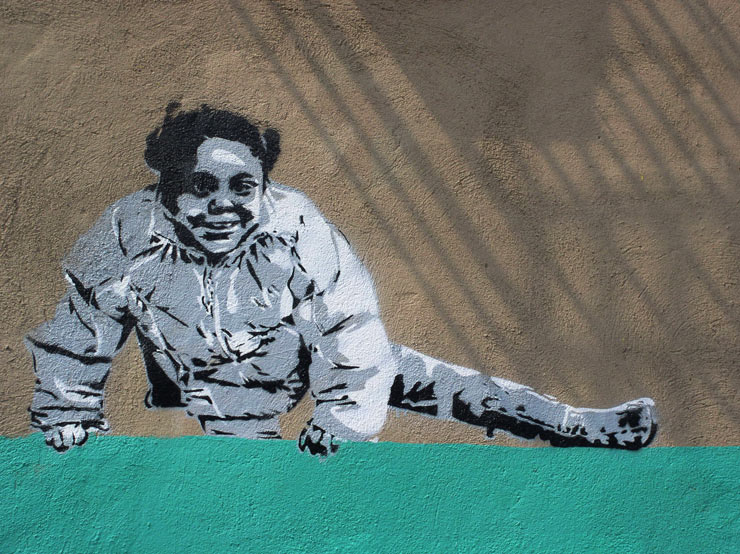 Gustav Klimt the famous Austrian painter is turning 150 years old and The Vienna Tourist Board has teamed with The Lazarides Gallery in London to give Klimt street creed in the hopes that younger audiences will start following him on Twitter to gain knowledge on the secrets of his longevity and hopefully on his craft as well. To this effect curator Sydney Ogidan tapped nine international artists to take inspiration from some of the master’s most iconic masterpieces and create their own paintings. The opening reception for this show “Klimt Illustrated” is tonight at Lazarides Gallery in SOHO. 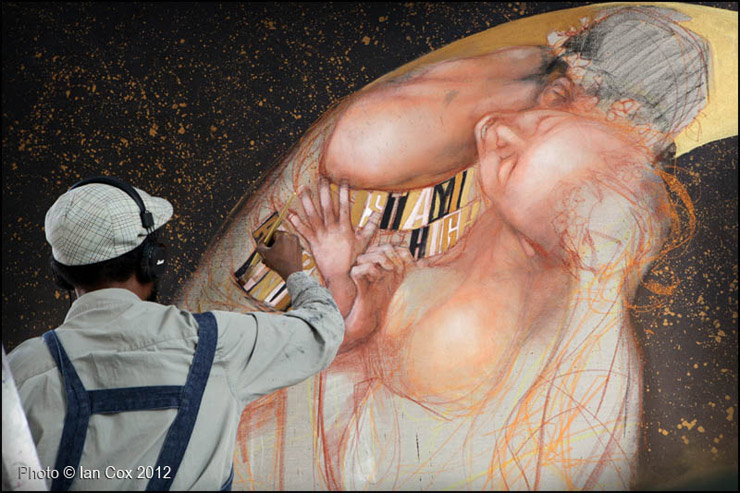 We thought we noticed a change in the air when the Australian storm called LUSH landed on these shores. Well here he is, likely to offend a few uptight prone-to-nose-bleeds stiffs and even more likely to amuse a lot more of us loose New Yorkers. LUSH has been madly working on a series of drawings/illustrations for his show “Shitty Drawings In New York City” opening Saturday night at the Klughaus Gallery in Manhattan. Half political cartoons/ half comic book with a blunt appreciation of the mechanics of the male and female reproductive organs, LUSH’s commentary on social, political and popular culture can be right on the spot. Dimwits need not apply. 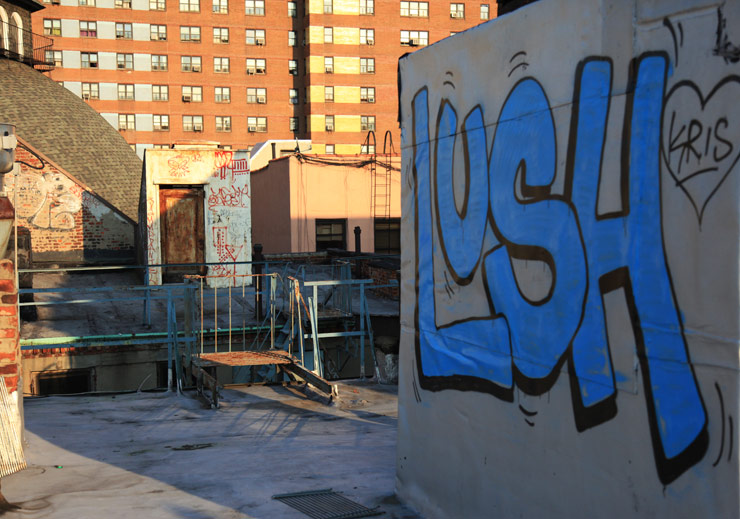 Shepard Fairey needs no introductions at this point in his career or this point in our dang blog. One can always be certain to find him busy at work and getting involved in as many projects as he can humanly fit in his schedule. Mr. Fairey is constantly looking for inspiration and finding it often in popular culture that is around and accessible to all of us. For his new show “Americana” opening tomorrow at the Perry Rubestein Gallery in Los Angeles the artist has created a new body of work inspired by the songs of the great artist-musician Neil Young.  Shepard has found material for his canvases in the songs of Mr. Young new album “Crazy Horse”. 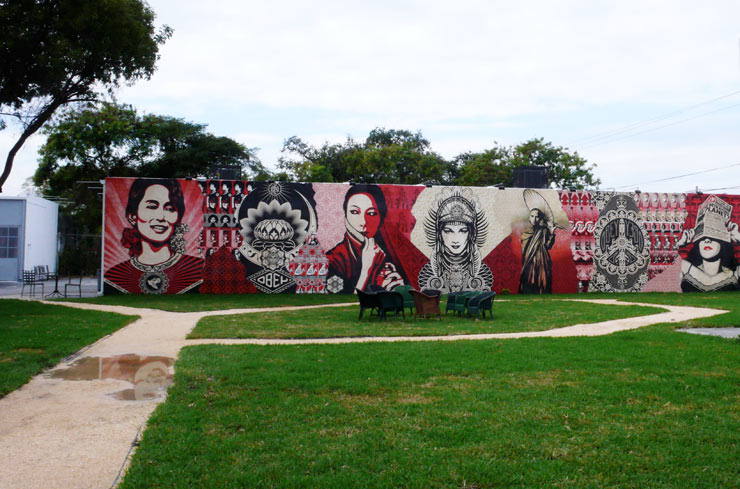 ALL STYLES Dance Battle at Postmasters Gallery in NYC (VIDEO)

You gotta give it up peoples! These are some of the best kids doing their thing right now. BSA Love to all of y’all.

BSA Images Of The Week: 10.21.18
Spooky! Days are getting shorter in Brooklyn. The winds of change are blowing, but few can discern the direction they'll go in the upcoming elections as the city is going full tilt into fall an...
David Walker Contemplates the Role of His Mural in a French City
“I was conflicted about making the mural in France,” says Street Artist and muralist David Walker about the new sky-gazing countenance of a woman he painted there during the recent terrorist attacks. ...
BSA Images of the Week 03.26.17 : Hong Kong Edition
This week BSA and Urban Nation (UN) are in Hong Kong for the 4th edition of HKwalls to capture a very international and local mix of artists in this East/West nexus; a world-class city for...
Images of Week 07.12.09
Our weekly interview with the streets The desire to regenerate Viking manhood through heroic struggle meets Dior. (El Sol 25) (photo Jaime Rojo) Interstitial musings on cranial sacral ...
"ABOVE" in New York City
In dense cities like Hong Kong and Tokyo and New York there is so much activity that takes place above you, yet we primarily grant relevancy to what happens at street level from our pedestrian perspec...
Barry McGee Berkeley Art Museum and Pacific Film Archive (BAM/PFA) Borf Brooklyn Street Art CA Cyrcle Dabs Myla Detroit Gustav Klimt Icy Iran Jaime Rojo Klughaus Gallery Lazarides Gallery Los Angels LUSH Manhattan NYC Open House Gallery Perry Rubenstein Gallery San Francisco Shepard Fairey SOT Steven P. Harrington The University of California