Armory Week is back in town and Fountain Art Fair is nailing it. At the moment – literally. Walls are going up as you are reading this. 200 feet of walls are dedicated to Street Artists – Enough said. Fountain has moved inland this year from the floating, sometimes harrowing, gallery and submarine Murder Lounge on the Hudson waterfront, and in many ways the new Fountain also feels more grounded. Don’t worry, not too much.

Apart from being in an actual Armory building, a 106 year old institution that lends a certain New York Beau-Arts grandness to it all, Fountain is still anybody’s guess in terms of content and execution; which in our minds is precisely the point of going. The chaotic nature of the creative spirit as wielded by many of these youngish artists means that they are better thought of as corralled, rather than curated, into this grand sweeping space that has plenty of headroom.  Part punk D.I.Y. art party and part Occupy Art Fair, the promise of Fountain lies in the work and your own sense of exploration, rather than the prepackaged pomp of slick-talking retailers.

Naturally there are a slew of Street Artists in Fountain this year, including Chris Stain, Know Hope, GILF, Imminent Disaster, Joe Iurato, LMNOP, Elle, ShinShin, LNY, Cake, En Masse, Sophia Maldonado, Hellbent, Radical! and Wing.  BSA caught some of them working in the last couple of weeks as they completed pieces and we give you some sneak peeks here. 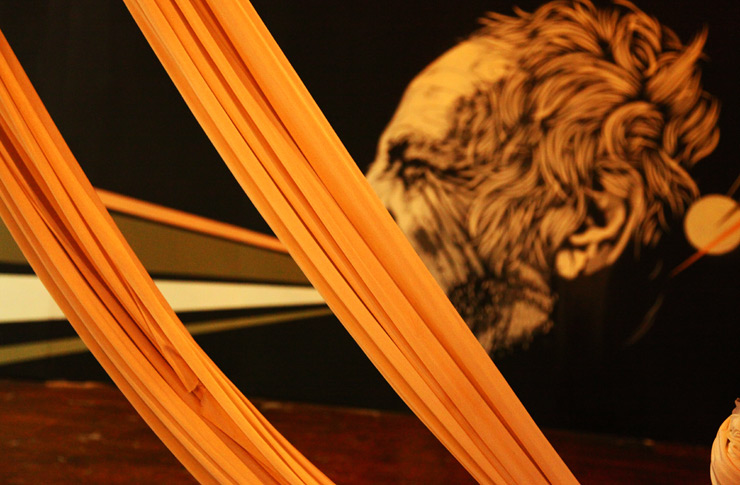 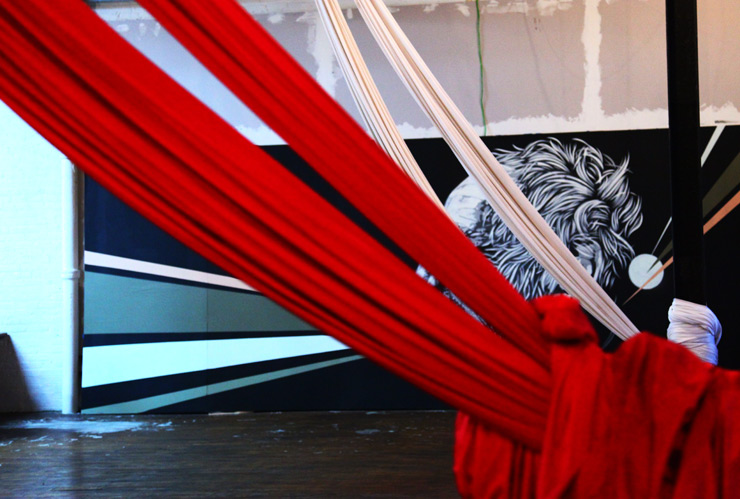 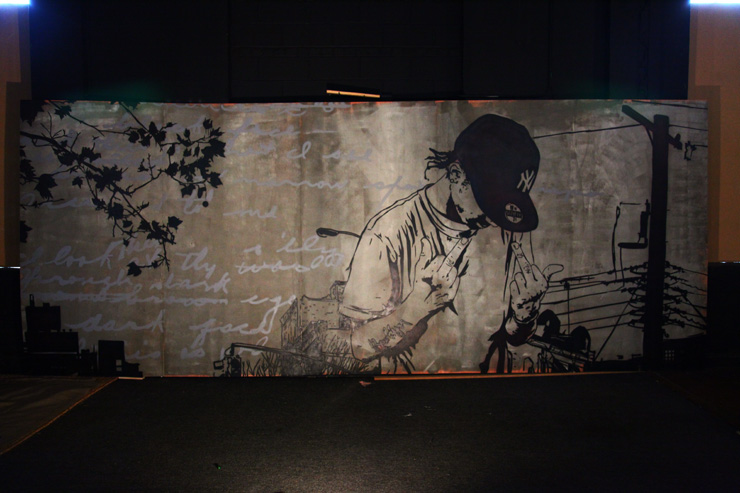 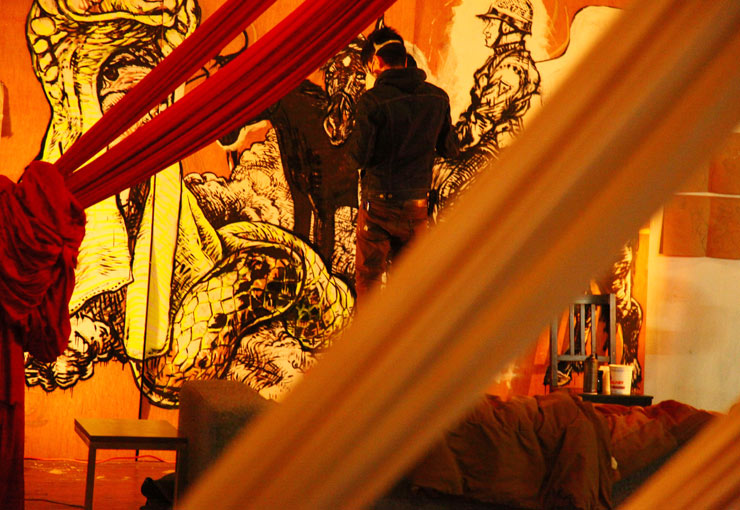 LNY, one of the newer Street Artists of New York at the moment, talked to us as he prepared his Fountain piece deep in Bushwick. His careful illustrative style has an unassuming quality, a sort of hand rendered fantasy he is channeling, and discovering, mixing and remixing symbols and imagination.

Brooklyn Street Art: How did you arrive at your current hybrid style of human/animals? Your depictions keep the humans remaining wholly human and the animals remaining wholly animals. They just seem to be attached to each other?
LNY: Animals are very interesting on their own but at the same time they have been used symbolically so much everywhere. For instance I noticed that many countries use the eagle as a national symbol: Egypt, USA and Mexico all have eagles in their national symbols. When I have an inclination to draw I often find myself drawing animals.

Brooklyn Street Art: On this piece you are working on for Fountain you have NYPD Mounted Police with wings on them?
LNY: Usually my ideas just sort of pile up and then they get to something else. For instance the wings are going to be fire actually. I will add a couple more riders and they could be an apocalyptic kind of scene. The fun thing about symbols is that you can read whatever you want into them. I like the ambiguity of symbols a lot.

Brooklyn Street Art: How do you find the process of painting?
LNY: I really don’t paint anymore. I used to paint. What I used to do with painting doesn’t work anymore because I lost faith in the idea of painting – so I have to find something else. 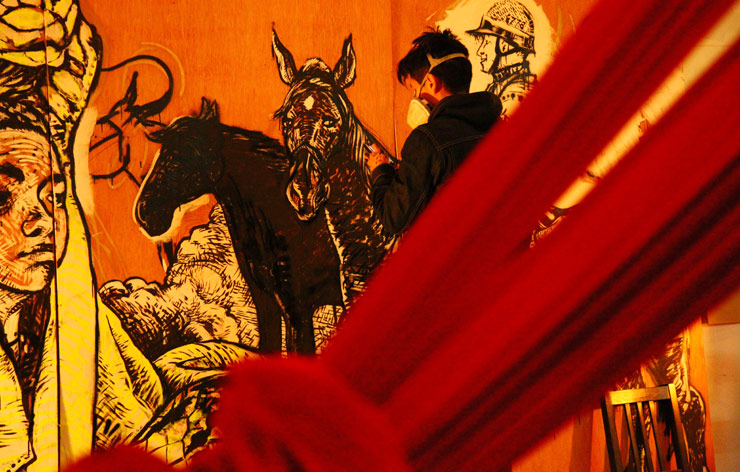 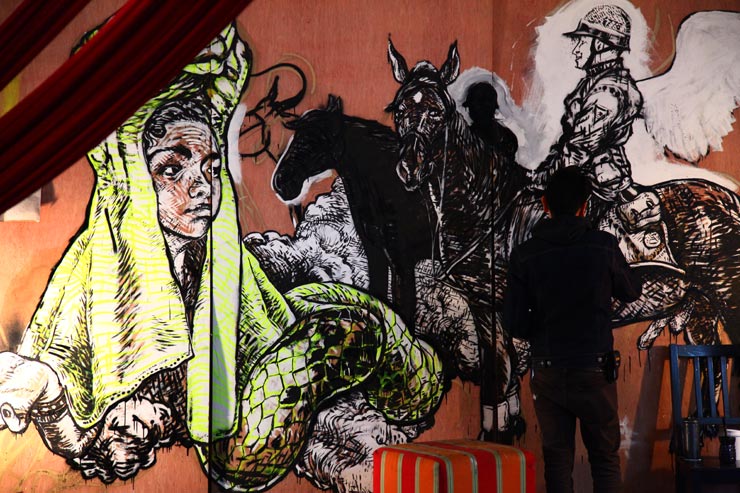 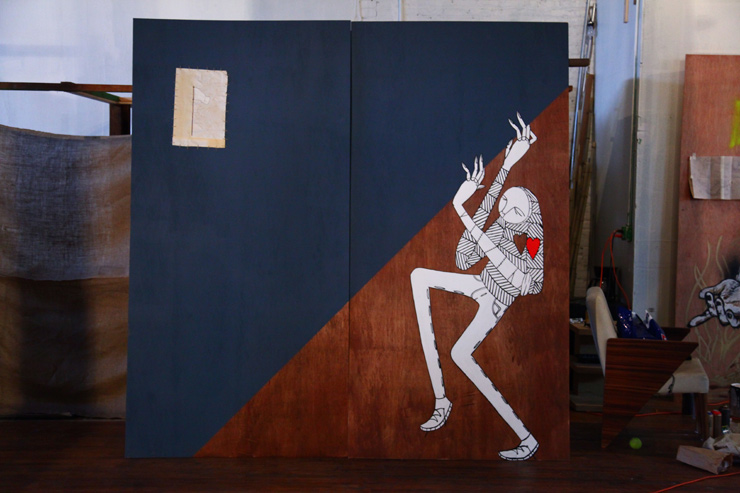 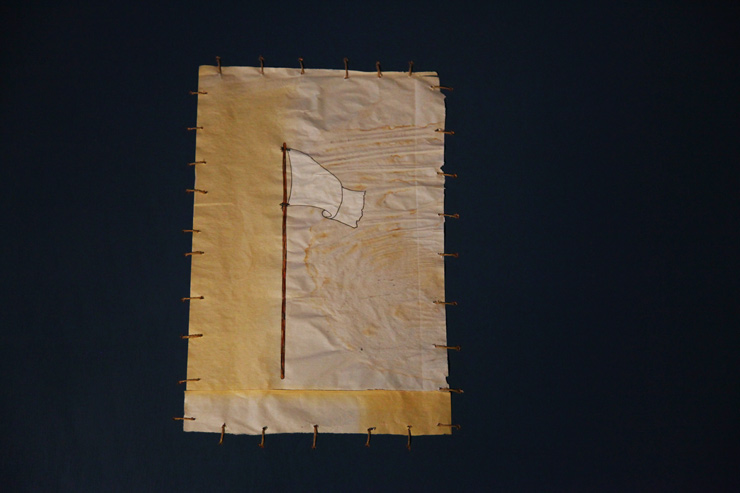 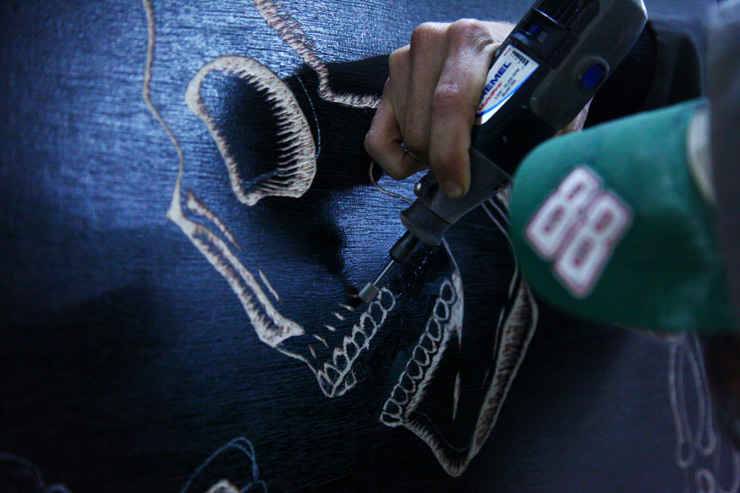 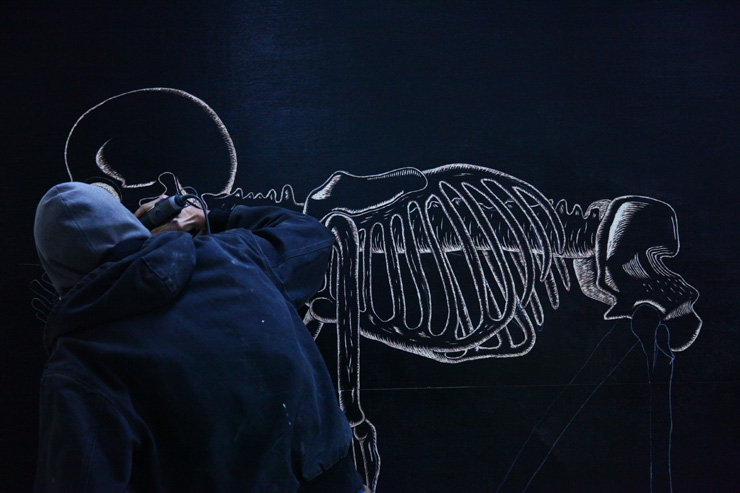 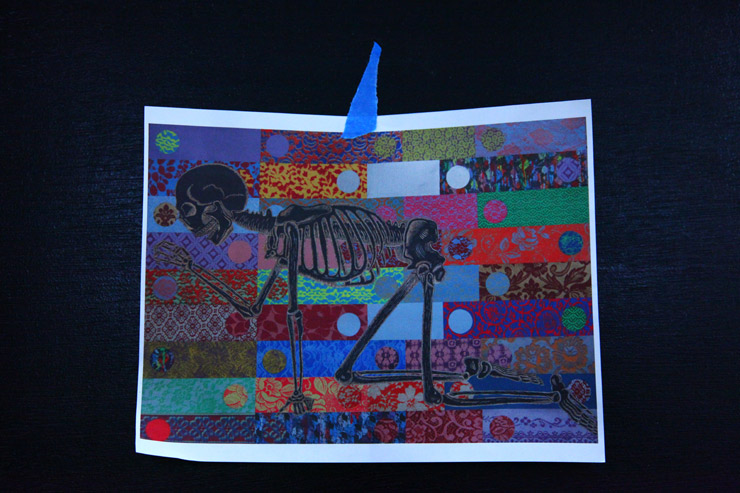 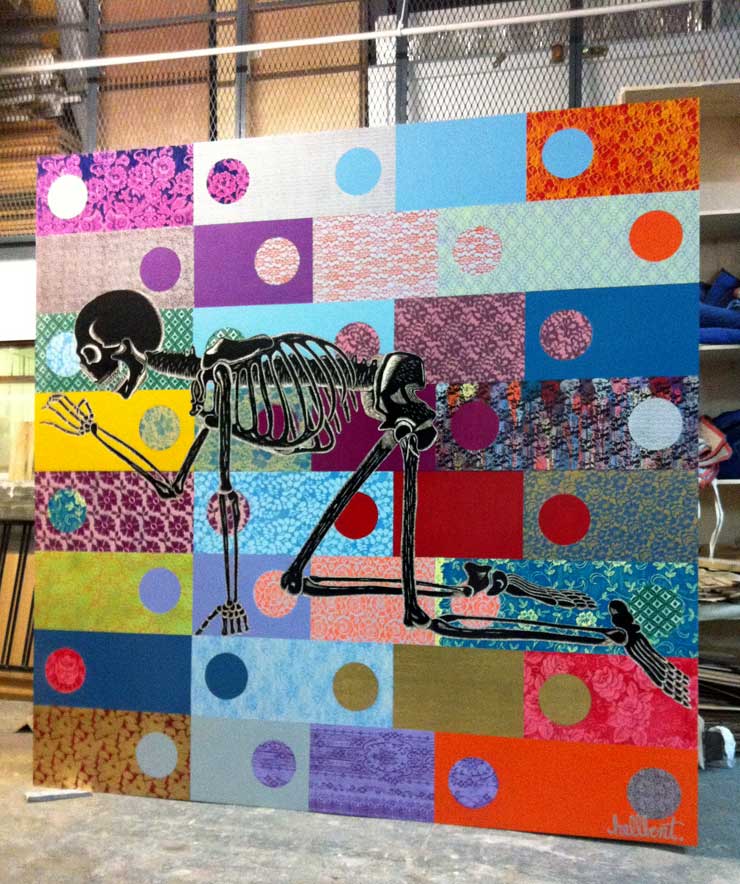 Finished! A semi-blurry cellphone pic of it from last night. (photo © Hellbent) 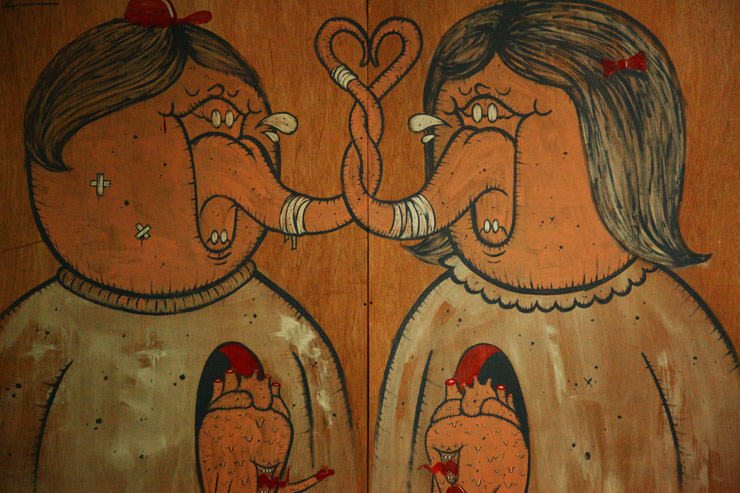 Lapiz: Drowning Refugees and Child's Play in the Mediterranean
“Happy kids are playing the game, but something is off, the chairs have been replaced by life vests and the EU is playing the music.” Street artist LAPIZ says his darkly themed new stencil piece is ba...
BSA Film Friday 07.02.19
Our weekly focus on the moving image and art in the streets. And other oddities. Now screening : 1. Facing The Giant: Three Decades of Dissent Part Two - Shepard Fairey2. Stephanie Boyce: If ...
The "Melting Earth" and INO at Bloop Fest Ibiza 2017
Topical and timely, street artist INO has the scoop on global warming right now at the Bloop Festival in Ibiza, Spain. INO "Melting Earth". Bloop Festival 2017. Ibiza, Spain. July 2017. (photo © Mr...
Fintan Magee and “Follow the Leader” in South of Paris
Back to the south of Paris today to see a trio of children on the new wall done in late September by Sydney based muralist Fintan Magee. Fintan Magee. For Wall Street Art in Savigny-le-Temple, Fr...
Hot KNARF Pushes a Graffuturist Organic Edge in BK
Currently in Miami painting by a bus stop in the midst of the Wynwood storm, Austrian Knarf brought his sketchbook to life with characteristic wit and rhythm in Brooklyn last week on a large wall in B...
Brooklyn Street Art Cake Chris Stain Elle En Masse Fountain Art Fair Gilf Hellbent Imminent Disaster Jaime Rojo Joe Iurato Know Hope LMNOP LNY Manhattan NYC RADICAL! Samson Contompasis Shin Shin Sophia Maldonado Steven P. Harrington Wing