Last month photographer and video artist Carlos Gonzalez tagged along with Street Art duo Dabs & Myla in Los Angeles to do a bit more than the typical mural project. Following them through the steps of their own tradition, Carlos captured some of their humanity along with their serious skillz with cans. Since illuminating different angles of the creative process that provide you with more insight is always a BSA value, Carlos has appeared on these pages many times as photographer and videographer. This time he’s thinking his newest project is a documentary. Let’s see what you think. 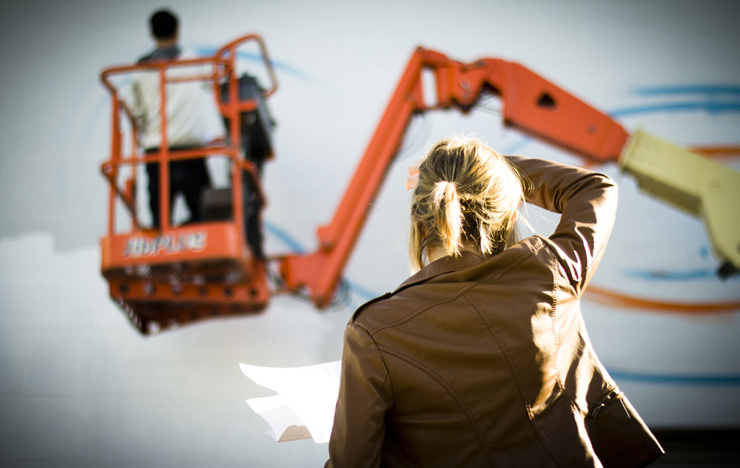 Brooklyn Street Art asked Carlos a couple of questions about his experience shooting on the streets and how many arms he would like to have:

Brooklyn Street Art: You like both stills and video. How do you divide your time when shooting a new installation between still photography and video. Do you wish you could have eight arms to cover everything that happens?

Carlos Gonzalez: I still lean more towards still photography even though I have a background in film and graduated from film school. I like the concept of freezing a moment in time. That’s something you can’t capture in video. When one remembers a certain moment from the past, it’s always an image or a single moment that comes to mind. It’s hardly ever a scene playing out entirely. At least that’s my experience. So I feel like photography captures moments that will never happen again in a more honest way.

Of course this complicates things when making a video because in essence, I have to choose between capturing those moments in stills or filming the moment. The best approach: Be ultra aware of everything that’s going on so when the special moment happens, you’re ready to capture it before it’s gone. What’s really interesting about this Dabs & Myla video, and one factor which didn’t hit me till later on, was how uniquely close the mural footage looked to my photos. In this instance, it was just a matter of predicting when those moments would happen and capturing them as soon as possible. So yeah, it’s a balancing act and at times, I do wish I had multiple cameras all running at once from 5 different angles. But even then, I’m sure I would still kick myself for missing out on a small human expression, a certain movement, a wink or a smile. Case in point, the shot where Myla’s hair is blowing amidst the wind. I wish I had photographed that moment as it happened. I still look back and think, “how did I not get that shot?” 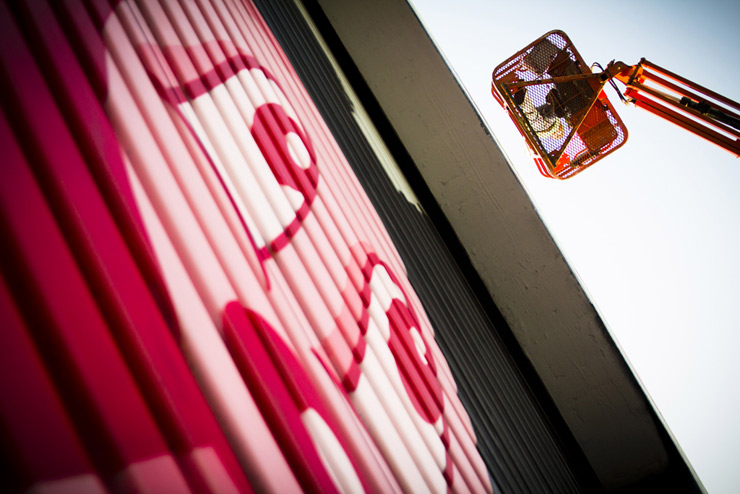 Brooklyn Street Art: You begin the video with the artists going to a grocery store and debating over purchases. At the end we find out what they are used for.  Can you talk about the experience from your perspective?

Carlos Gonzalez: The experience was really interesting and I felt privileged to be a part of it, mostly because I understood how important this tradition is for Dabs Myla. Before the mural even took place we got together and talked about the tradition, their reasons for doing it, and I even saw early sketches of the mural. From that moment I understood how special this project could be and it simply came down to capturing the whole experience in the most honest way possible. The entire process really came down to capturing as much footage as possible. Sure there were ideas of how to edit the video. But those concepts are always changing so you don’t worry too much about those technical aspects in the start. At least with this video, which I treated like a short documentary, I was just concerned with making sure I filmed moments that feel unique and that have a human element that we can all relate to. 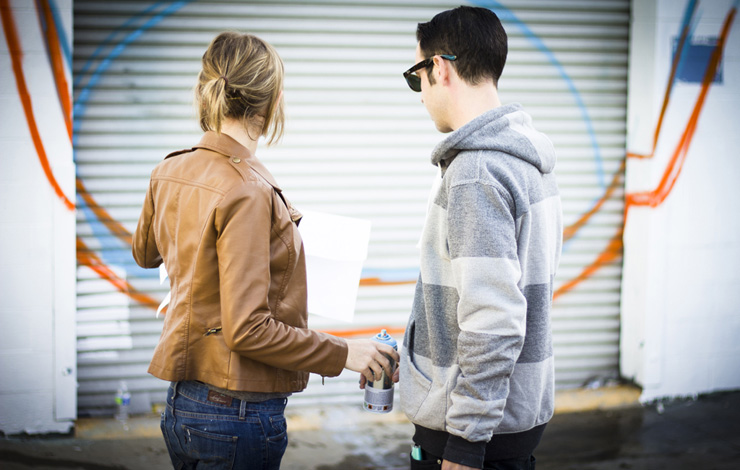 I never once asked Dabs Myla to replay a certain moment just for the camera. I basically asked them to go through their routine as usual and pretend that I was never there. This feeling definitely comes through the video.  From the second they walk into the grocery store to the final shot of the film, it’s all real emotions and actions bursting through the screen. So in a way, this video is not so much about a mural, but rather it’s a story about helping one individual with street art as the backdrop. The last part of the process was to edit the footage in such a way that put a question in the viewers’ minds about what the tradition may be and you keep their attention till the very end so there’s an emotional payoff. 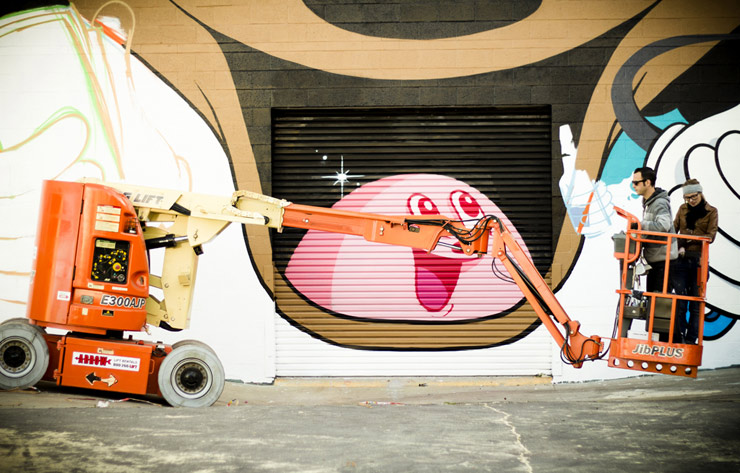 Brooklyn Street Art: When you’ve hung out with artists creating murals on the street, have you had occasion to meet people who live there?

Carlos Gonzalez: I have had the chance to meet individuals whose properties or walls are being painted on. And they’ve always being very supportive of the art. I’ve only had one instance where certain people or neighbors feel like street art is affecting their neighborhood in a negative way. So yes, there’s a bit of stigma still attached to graffiti and street art, but it’s clearly changing and it’s more acceptable now than it ever was. And hopefully videos like this one and others can change more people’s perspective about how this kind of art can have a much more positive aspect across different communities. 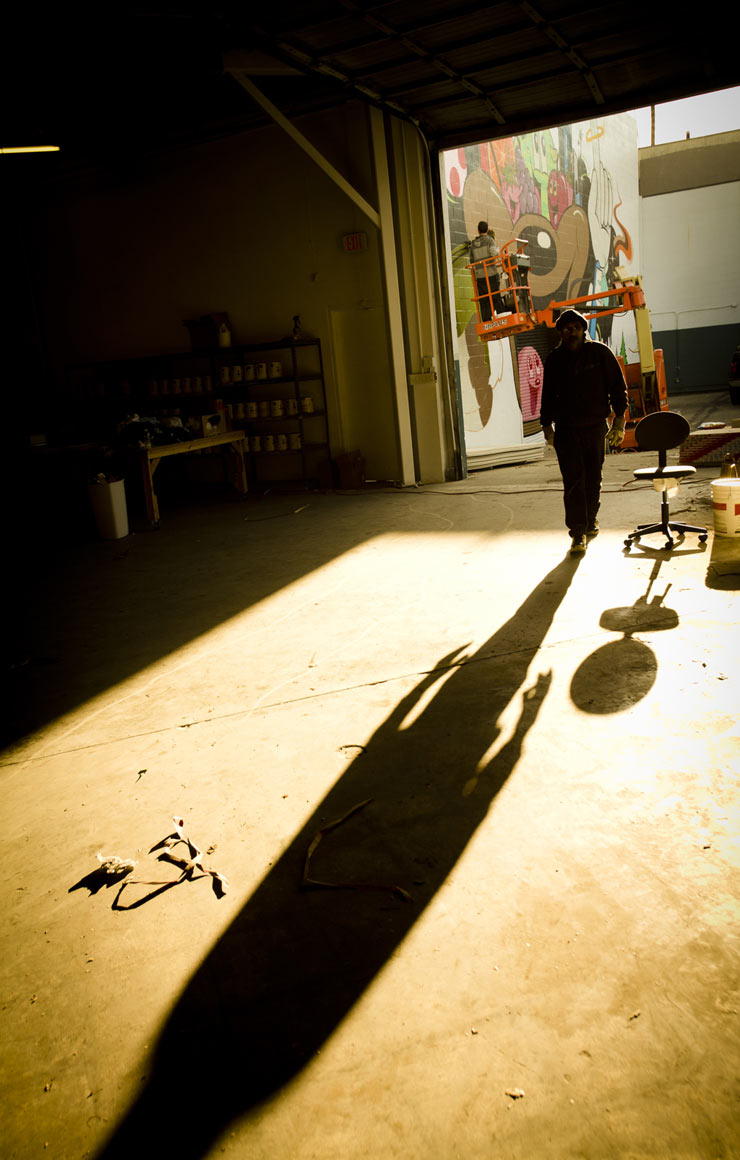 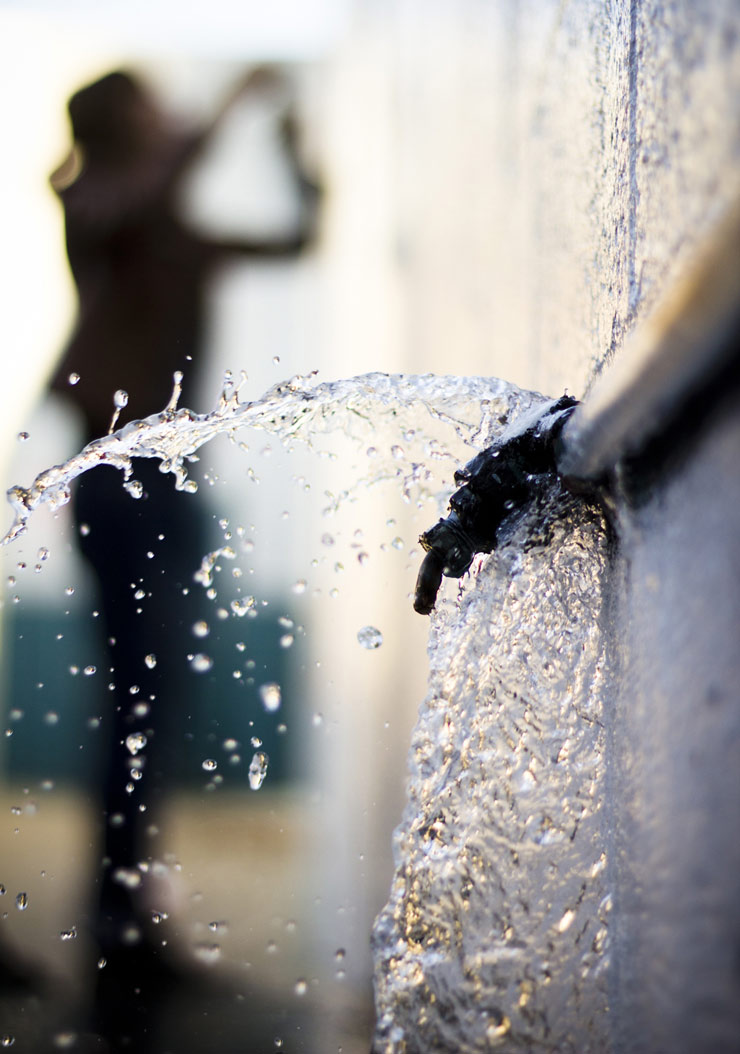 Barlo "Upside Down" in Hong Kong
Street Artist Barlo sends us this mural he did in his hometown Hong Kong in the back of a bar that features caricatures sculpted of Mao, Stalin, and Hitler – which gives you an idea of what sorts of r...
Where Graffiti Art Is The Rose of The Desert : Spraying Outside the Jardin
When you are a renowned graffiti writer living 25 minutes outside of Marrakech at an artists compound and painting in your studio to prepare for an upcoming exhibition on canvas, sometimes you still a...
BSA “Images Of The Year” for 2017 (VIDEO)
Of the thousands of images he took this year in places like New York, Berlin, Scotland, Hong Kong, Sweden, French Polynesia, Barcelona, and Mexico City, photographer Jaime Rojo found that Street Art a...
BSA Film Friday 01.26.18
Now screening : 1. Vermibus - In Absentia 2. Balú - Hutsean 3. Pati Baztán for Contorno Urbano 12 + 1 in Barcelona 4. Ai Weiwei: Human Flow. Trailer 5. Balloons Festoon the Ballet with Jihan Zenc...
Thankful For Immigrants: Manolo Mesa paints Unity, Equality, and Inclusion in Pennsylvania
Tomorrow the US marks the Thanksgiving holiday, our great non-religious gathering of families and friends that most people enjoy precisely because of its non-sectarian foundation. We break bread toge...
Brooklyn Street Art CA Carlos Gonzalez Dabs Dabs Myla Jaime Rojo Los Angeles Myla Steven P. Harrington