It’s always cool to learn about an artist’s process and the story behind his or her work. Street Artist Chris Stain shares with you here where he gained inspiration for his gallery piece called “Give ‘Em Hell”. 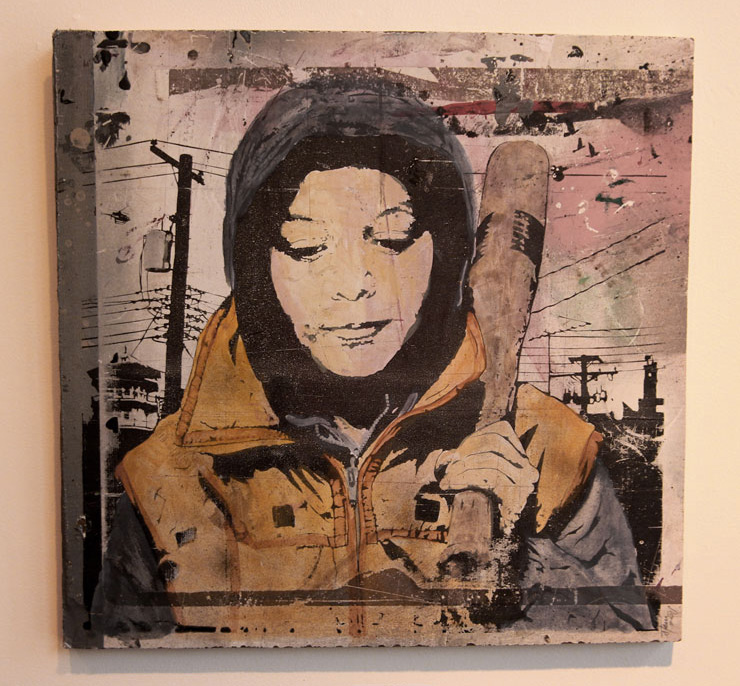 “When I was a kid growing up in Baltimore we always played baseball and pretended we were Eddie Murray or Rick Dempsey when stepping up to bat. It wasn’t until later that I realized that a baseball bat could be used as an equalizer when the bigger kids thought it was a good idea to kick my ass for the fun of it.

This piece represents for me standing up for yourself and the things you believe in. The boy in the picture was originally photographed by Boogie. The background photos were taken by me during a trip to Baltimore. I hand cut the image out of rubylith and screen printed it onto an old table I used to work on. Then I hand colored it with thinned out spray paint and wood stain.”

From our interview with Chris for Juxtapoz:

“Born in 1972 and raised in East Baltimore, Chris Stain is a New York-based, self taught stencil artist and print maker influenced by social realism, the plight of working people, and skateboarder culture. His straight-forward portraits in urban or industrial settings harken back to the Depression, when bankers and masters of industry declared war on the blue collar and poor. With blunt realism and everyday protagonists, Stain encourages passersby on the street to draw direct connections between social and economic conditions of then and today.”

Read Chris’s answers to the Back Talk questions on Juxtapoz here:

Parees Festival 2021 Honors History, Community: Goes "Beyond the Mural"
“Beyond the Mural” is the name of a tour program they had this year for the 5th Parees Festival in Oviedo (Asturias, North of Spain). The intention of the tour is to give people a unique up-close ide...
BSA Images Of The Week: 10.18.15
Groovin' on a Sunday afternoon.... This week was full of great Street Art stories - the main one everyone was talking about was fake TV graffiti by the Egyptian Street Artists who hacked the prop...
Alexandra Parrish : 14 From 2014
Happy Holidays to all of you charming and sparkling BSA readers! It’s been a raucous sleigh ride with you and we thank everyone most sincerely for your support and participation this year. A sort o...
Swoon's New Drawings for Heliotrope Foundation Benefit with BSA in NYC
Here is the first public look at eight of the new thirteen drawings by Swoon which she made while in Haiti a couple of week ago. She is donating her own work to aid Heliotrope Foundation programs in...
Icy & Sot and a Man of Trash in Tbilisi, Georgia
15 centuries old, Tbilisi may not last as long as this garbage man sculpture by Street Artists Icy & Sot. Icy & Sot.  "Human reflection on nature". Tbilisi, Georgia. May 2017. (photo ...
Baltimore Boogie Brooklyn Street Art C.A.V.E. Gallery California Carlos Gonzalez Chris Stain Los Angeles photography Stencil Street Art Street Art Saved My Life: 39 New York Stories thinkspace gallery Venice