The first New York gallery show in three years for Street Art collective Faile opens tomorrow at Rubenstein Gallery; a heavy graphic quilt of past, present, and “jimmer-jam”. With the 12-piece “Bedtime Stories”, Patrick and Patrick debut a densely packed wood painting show of story, texture and humor in a quite intimate setting. 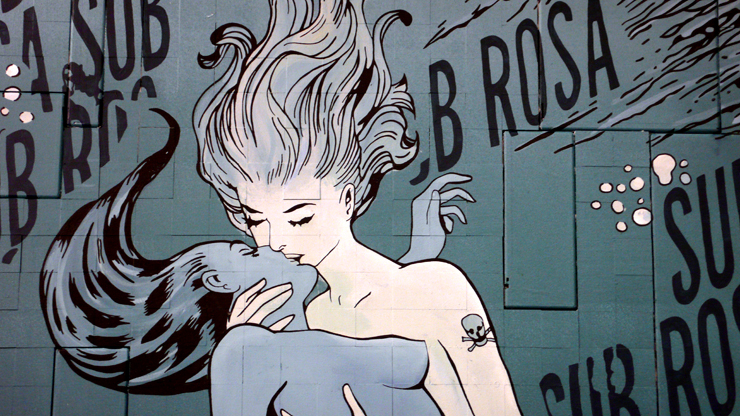 All Hands on Blocks

Checking on progress as they finished final pieces last week, Brooklyn Street Art was treated to completed block tapestries and works in progress in their buoyantly buzzing studio. Long days have turned to long nights at the end of this parsing of pieces, and the output exceeds the storage.

It’s a hard charging exploration of process, with the selective re-combining of broken-apart wood canvasses.

“Bedtime Stories” is a glut of hand-packed eye candy; steel girded graphic thoughts crashing and merging deep into the diamond mine of Faile’s visual verbiage, delivered with storytelling finesse. Each individual piece is a near-dizzying puzzle of pop plied with rigor chock-a-block against the restraints of an unbending welded frame.

Patrick McNeil: It’s like eating chocolate cake with chocolate ice cream and chocolate pudding and a cup of hot chocolate. They are a lot to take in.

As they talk you get the idea that they needed some psychological space from the constrictions of a themed show and they became enamored with the wood painting process more than the exact outcome. It’s clear that the new approach has been gratifying.

Patrick McNeil: This isn’t really an exhibition about message, it’s more about process. Not to say that it is devoid of any message. It’s just been more about building than about going out and trying to make a statement with the visual.

Patrick Miller: Yeah I think that’s more what we talked about a little before – about how it was about getting loose and have fun making images again and not feeling like it was one big overarching theme that was going to drive the whole body of work. Given that we were really interested in exploring the medium, I think the message is kind of coming through in the process.

Patrick McNeil: Yeah I think our last two shows were so theme related that I was like, “Let’s not think about the space as much.’ It’s more like, let’s just make a body of work and when it’s show time let’s collect it all and see what hangs right and looks good in the show and go about it that way. We wanted to be more organic in the process instead of so structural.

Patrick Miller: Some of our recent previous shows were “a series of” paintings that either ran together or lived together in some way –although these actually do too in a way. 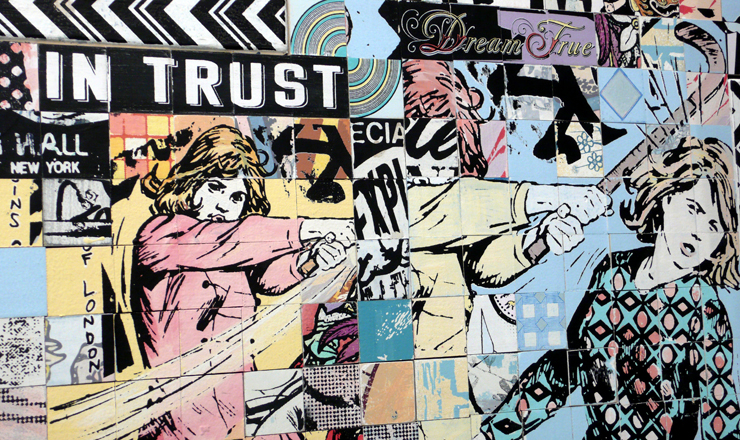 Brooklyn Street Art: Well each piece contains your DNA so they kind of have to reflect your story.

Patrick Miller: Right, they all start as a bigger piece, and then those get broken apart and built back into other pieces. I feel like when you look at them all and they are all spread out you can really see; “Oh, that’s a part of that, and this is a part of that”. So in that way I feel like it is a “Faile” kind of thing. 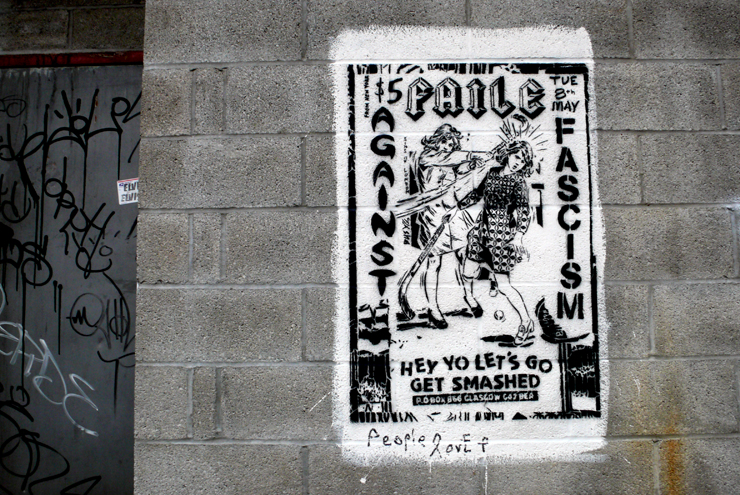 In the middle of the studio a large wooden canvas painted blue with a black lined pulp inspired tryst is lifted by three studio assistants to rest on blocks against the wall so that it’s bottom can be painted. Later this thick wooden canvas will be sawed into cubes, but for now it is a complete 4’ x 6’ duotone.

The process of creating can encompass many pieces developing at once. A smaller or midsize piece that grows beyond its’ original boundaries is re-located into a larger frame where it has more freedom to grow. 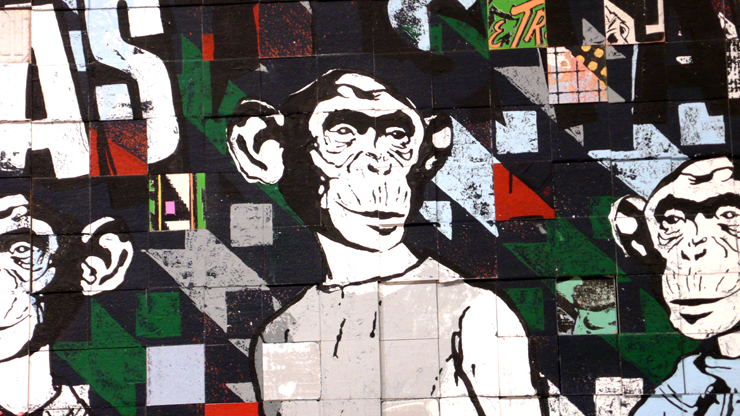 “We don’t want to see any go out without enough lovin’, ya know”

Often a piece will get re-worked multiple times to finally strike the balance that it needs – a intuitive sense that both Patricks have and trust in the other. Studio assistants have also learned the language of Faile and can tell when something probably needs reworking.

Patrick McNeil: There’s a lot of made up words; Shimmer-sham, Jimmer-jam….

Patrick McNeil: Yeah you’ll be like, “That needs a little shimmer-sham right there and some down there.”

Brooklyn Street Art: And does shimmer-sham mean the same thing, have the same definition for everybody? 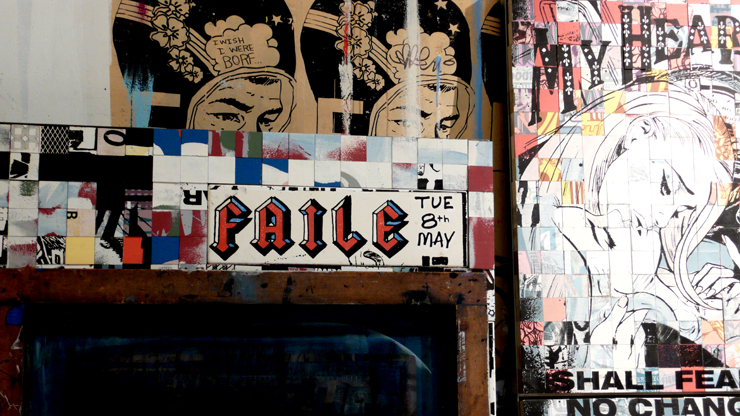 Ask the studio assistants, and they’ll tell you the same; In a close-knit group that works long hours together making art, it’s not unusual to develop a vocabulary and shorthand that speaks to the art and the process. 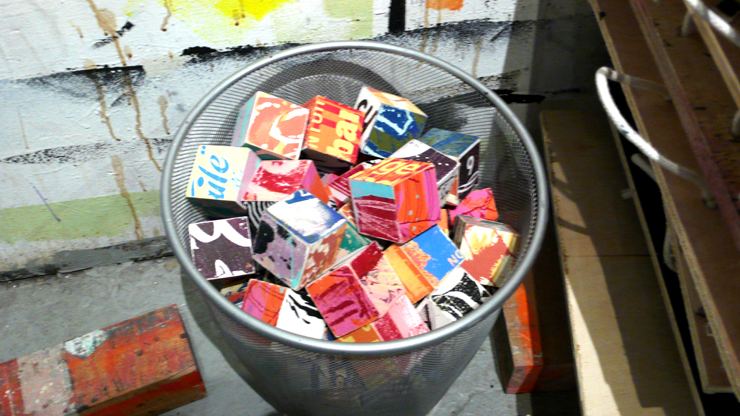 It’s not likely that would ever happen in a Faile show, they care too much. A loose tension. Structure and play. The rebel yell. Details don’t slip by, meanings are hardly incidental, and everything is considered. Smartly aware of concepts like brand and marketing, they stay on message and deliver the goods. New patterns and texts must be vetted and go through a background check. Just kidding. 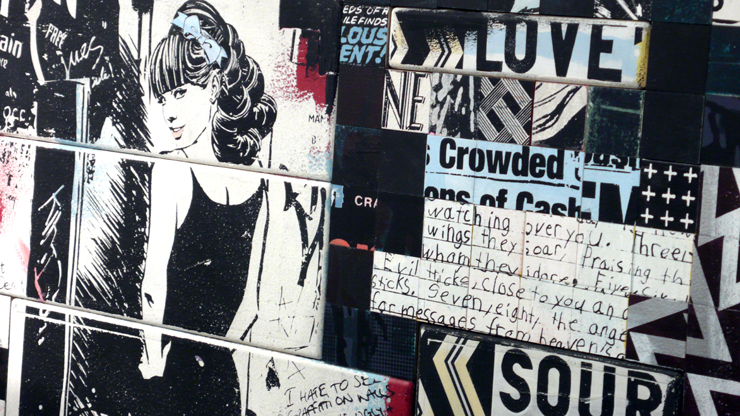 Brooklyn Street Art: What is “Bedtime Stories”? – A reference to your parents, your mates, your children, Madonna, Peter Rabbit?

Patrick Miller: I think we’d been searching for a title. We’d been talking about different things along the way. One of the pieces in the show is called “Bedtime Stories” and it’s a part of one of the new images. I think one thing we kept thinking about was that there was a period when we were both really interested in quilt making. We did a lot of research on it. 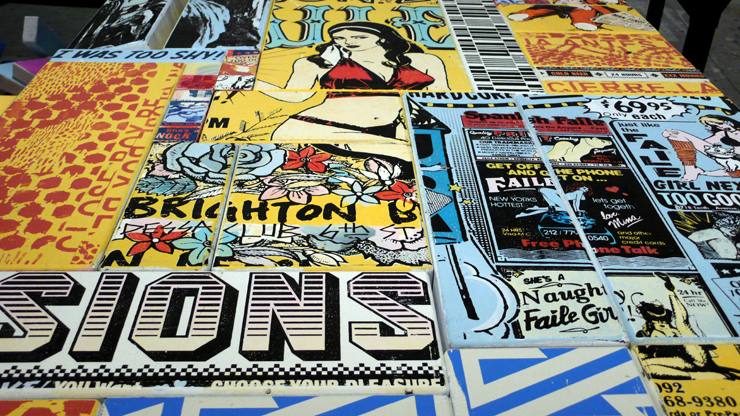 Miller: Yeah, and we kept saying throughout this process to each other how quilt-like these wood paintings were to us in a way. How much the process reminded us of that kind of craft feeling; Old American quilt making and that tradition. There was something about that – and bedtime, and beds. And then “Bedtime Stories” obviously refers to the narrative quality of the pieces and there is so much of that built in. As they come together and we take bits out of one thing and put it into another thing it starts to make new stories. There is sort of this tension between the pieces and how much visual experience that is in all of them and the bedtime being this quiet special moment. All those things, for me, made me feel like bedtime stories was a good fitting title. 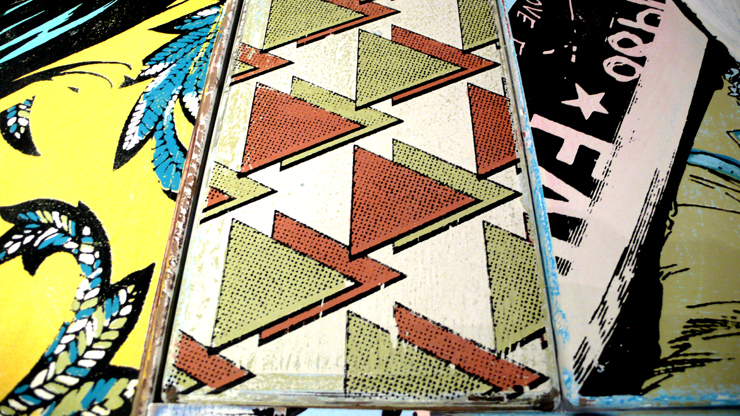 Brooklyn Street Art: (to McNeil) You didn’t have anything to add to that?

Patrick McNeil: That’s pretty much it.

Patrick Miller: It won out over “Block Shock”! (laughing)

Patrick McNeil: It really is shocking through blocks. They are kind of shocking pieces in the sense of the denseness of them and how much is in them. 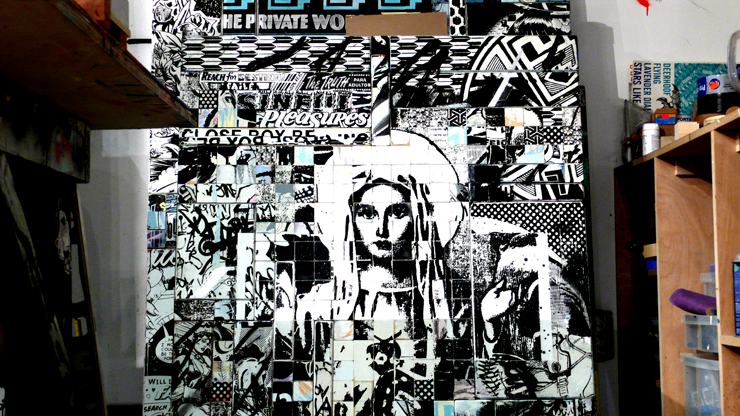 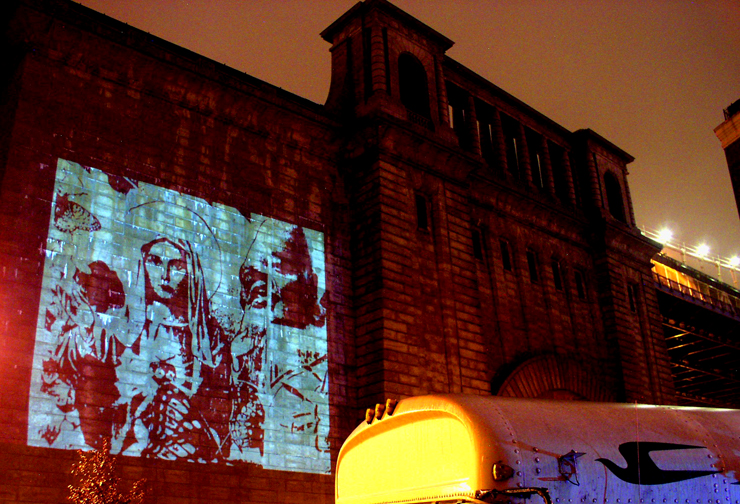 BSA’s “Projekt Projektor” in Dumbo, Brooklyn as part of Under the Bridge Festival September 2008.  Image of Mary by Faile ( photo © by Jaime Rojo )

Brooklyn Street Art: In a way these pieces are also analogous with dream states and what you remember the following day.

Brooklyn Street Art: They could be very intense pieces but…

Patrick Miller: And dreams, like, your memories of them are so fragmented. You are kind of left with “I remember this part and that part”, and that’s how these pieces are. They are assembled parts that make up this kind of weird tapestry.

Brooklyn Street Art: Right, and the parts of the dream that you remember are the most vivid, emotionally charged ones, or psychologically charged parts, not the subtle parts.

Patrick Miller: Yeah, and that’s a great way of seeing it.

Brooklyn Street Art: And you guys are not really marketing subtlety

Patrick Miller: No, not in this show. 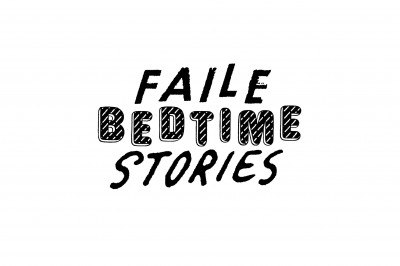 BSA Images Of The Week: 05.15.16
Coney Art Walls is back for 2016 and the artists have already begun painting, Duke Riley is on week two of performance with pigeons in The Brooklyn Navy Yard , the #notacrimecampaign is happenin...
NUART 2014 x BSA Update 5 : Tou Scene Opens Tonight
Beautiful weather here in Stavanger this week - perfect for riding bike all over to find artists walls and check out some hidden spots under bridges and abandoned lots. On a side note, this hotel ha...
BSA Images Of The Week: 01.24.21
Many people in New York and around the world breathed a collective sigh of relief this week when our native son from Queens got on that helicopter with his immigrant wife and A. left the White Ho...
Ann Lewis + StudioSpaceNYC Leave Things "Unspoken" in Manhattan
Some existential thoughts and questions are left UNSPOKEN in our lives. A new collaborative exhibit in a 14th Street pop-up space offers you the opportunity to engage with some of yours. Of cour...
r1 Replicates/Repeats Street Sign Chevron in Johannesburg Installation
The chevron is a common symbol on the streets of Johannesburg and South African Street Artist r1 recently completed a new public art piece made entirely of them. Using 180 chevron plates from street-s...
Bedtime Stories Brooklyn Brooklyn Street Art Faile Jaime Rojo Manhattan NY NYC Perry Rubenstein Gallery Steven P. Harrington