Brooklyn Street Artist Chris Stain just returned from Albuquerque, New Mexico where he participated in a program called STREET ARTS: A Celebration of Hip Hop Culture & Free Expression and he put up a huge version of his “Conductor” piece on this big brick wall. 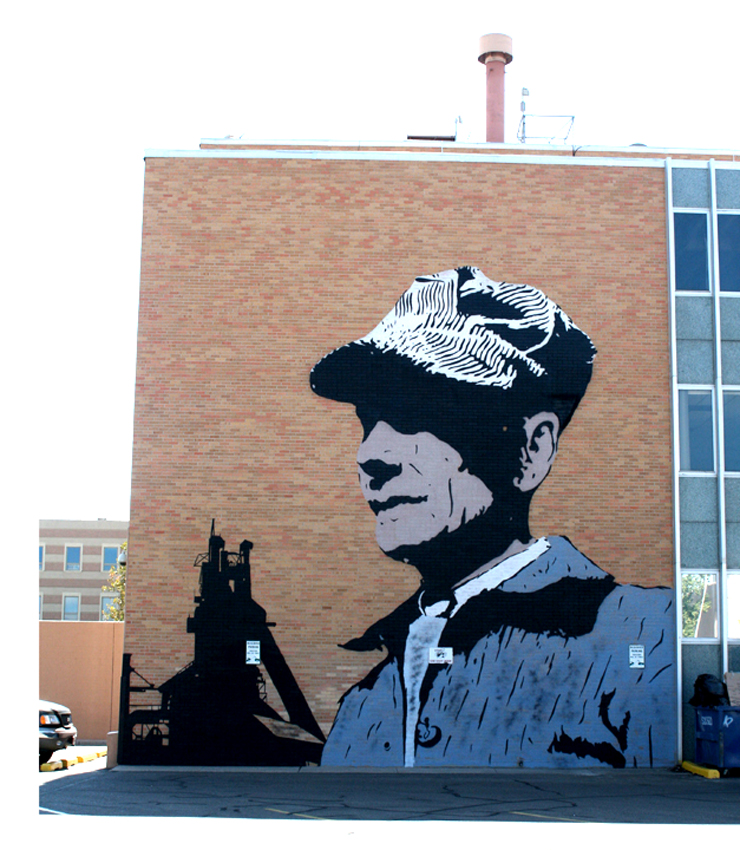 Stain was participating in a new arts collaboration event organized by Fran at 516 Arts and a number of other organizations dedicated to social justice and equal rights. He attended the event as a participating artist but he also took numerous photographs of the art on the street and in the gallery. 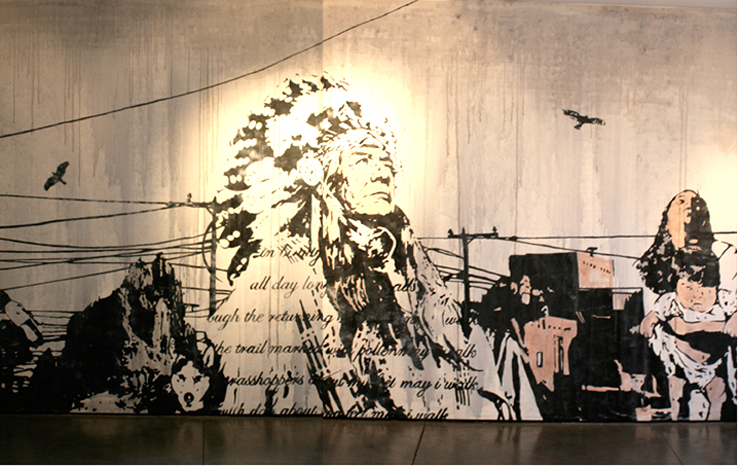 Mr. Stain reports, “I was very fortunate to spend five days in New Mexico compliments of 516 Arts and their supporters. It was certainly amazing to meet some of the people whose work I have admired for a very long time, namely Chaz Bojorquez and Henry Chalfant.” 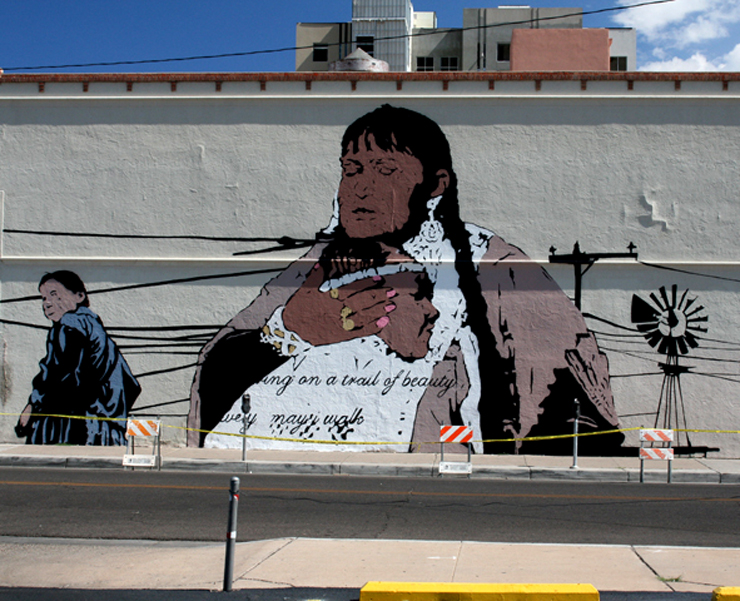 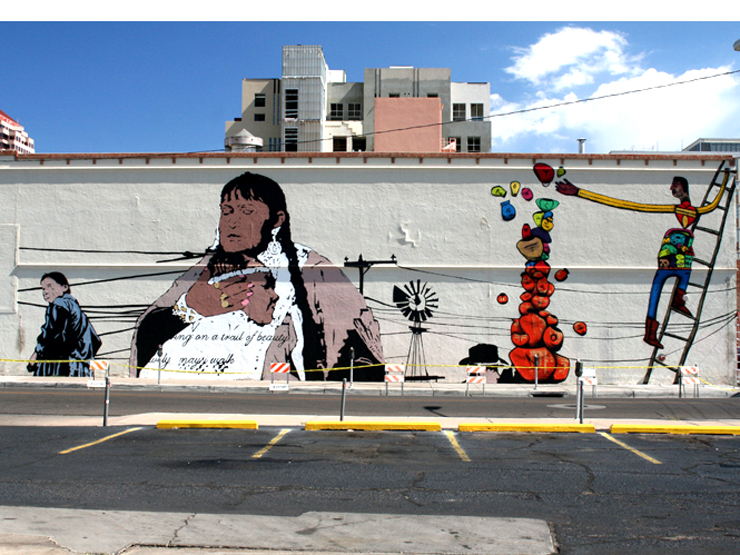 “It seems like Jaque and I have known each other for many lifetimes. There was a feeling of mutual respect for the work and the meanings behind it. Jaque brings his Native American culture off the res(ervation) and out of his heart and onto the street,” observes Chris.

A piece by Swoon © Chris Stain 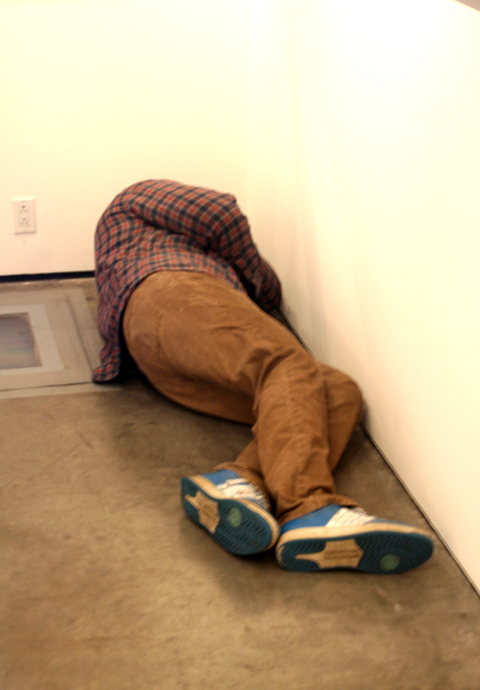 Dude, I am so beat I’m just going to take a little cat nap if you don’t mind.  A piece by Mark Jenkins shot by Chris Stain 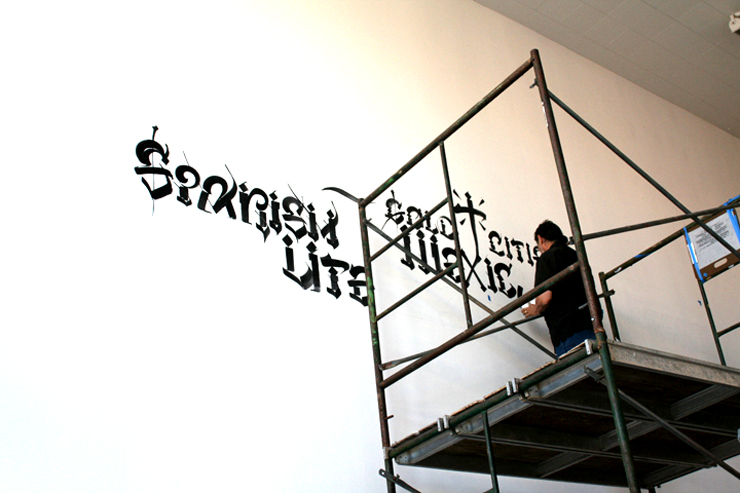 Says Chris, “It was quite a shock to be there watching a master letterer working his craft. I had just got his new book, The Art and Life of Chaz Bojorquez, in the mail a few days before leaving for my trip. I knew he was in the show but I didn’t know he would be installing as well.” 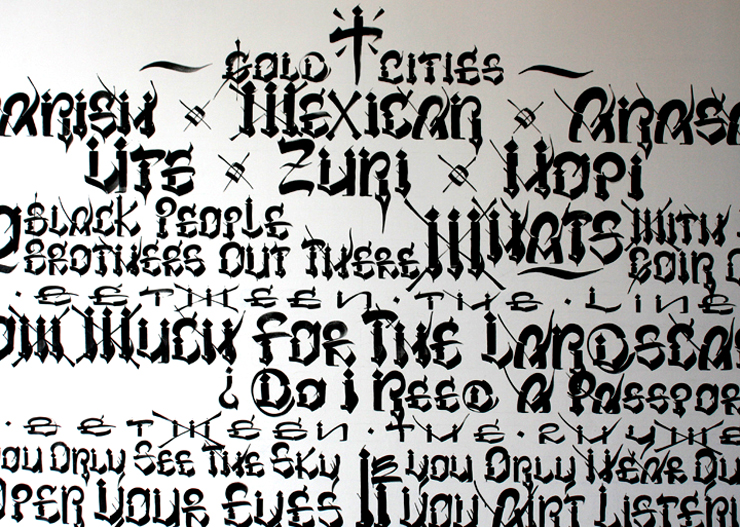 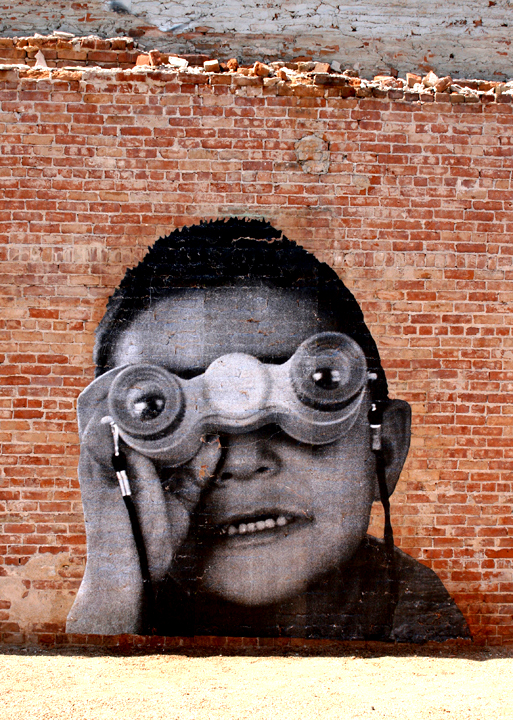 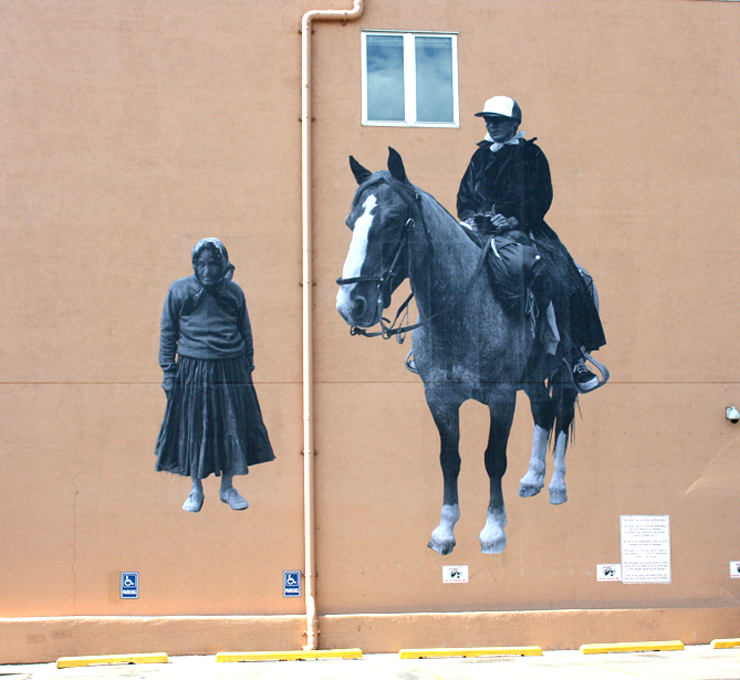 Chip Thomas took some of the photos that he uses for his street art on the Navajo Reservation where he lives and works. According to Chris, “he mixes his wheatpaste from the same Blue Bird flour that most residents use in baking.” 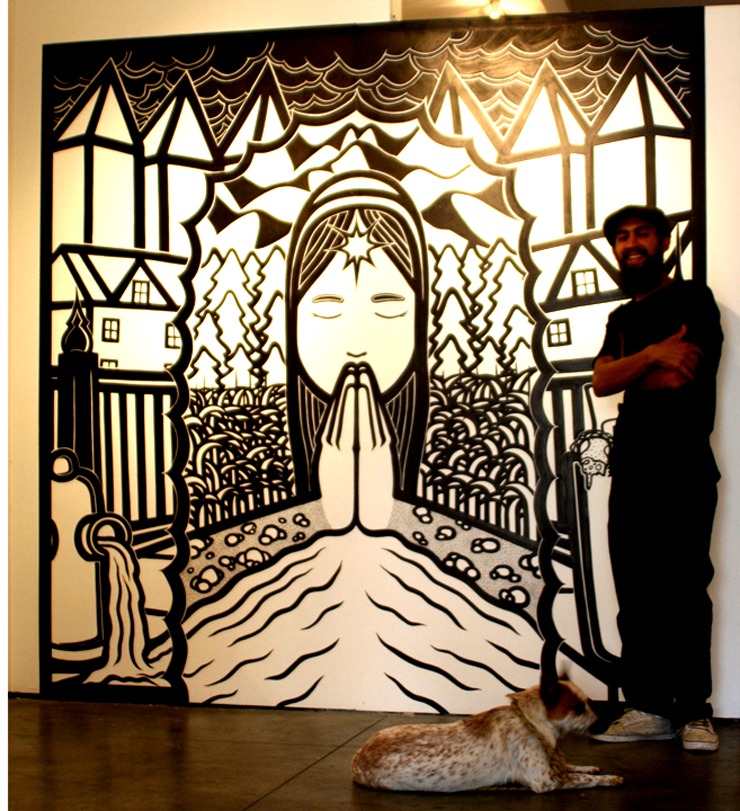 Steven Gutierrez poses with his assistant in front of his piece.

Special thanks to Chris Stain for sharing this with BSA readers. Learn more about Chris  and read his blog on http://www.chrisstain.com/

STREET ARTS: A Celebration of Hip Hop Culture & Free Expression, a new arts collaboration in October and November, organized in partnership with the ACLU-NM and involving 25 local organizations. It centers around a two-part exhibition at 516 ARTS titled Street Text: Art From the Coasts & The Populist Phenomenon, which examines Street Art and its evolution into an international cultural movement. The project celebrates art in the urban environment and explores issues of freedom of expression. It includes an exciting line-up of related exhibitions, new Downtown murals, spoken word, music, dance, talks, Street Art tours, a Hip Hop Film Festival and a Spoken Word Festival titled SHOUT-OUT: A Festival of Rhythm & Rhyme at multiple venues (November 4-7).

"XXL" with Skunkdog, POES, and Mohamed Said Chair at Montresso Foundation
Montresso Foundation at Jardin Rouge introduces a trio exhibition in its still-fresh exhibition space here just outside Marrakesh.  The three French speakers (two from France, one from Morocco) ...
You've Got to Be "Delusional" : Art Competition Prizes Announced
Friendly reminder that the Delusional Art Competition is coming up and if you are going to submit your artwork to this years big shoo with Jonathan Levine Projects you have about 53 days. How Long? ...
M-City: Wishes And Hopes For 2018
As we draw closer to the new year we’ve asked a very special guest every day to take a moment to reflect on 2017 and to tell us about one photograph that best captures the year for them. It’s ...
"ALL BIG LETTERS" : Exhibition of Style, Tools, and Technique of Graffiti
It’s called ALL BIG LETTERS but it could easily be called ALL BIG DREAMS because the outward techniques, the history, and the tools of the trade of graffiti on display at Cantor Fitzgerald Gallery all...
NYC Subway Cars: From Rolling Canvasses to Rolling Billboards
“If I had my way, I wouldn’t put in dogs, but wolves,” New York mayor Ed Koch suggested famously as a facetious proposal for loosing ferocious animals on graffiti writers in the train yards in the ear...
516 Arts Albuquerque Amalia Ortiz Amiri Baraka Brooklyn Street Art Cecil Taylor Chaz Bojórquez Chip Thomas Chris Stain Dafnis Prieto Dave Hickey Gaia Gajin Fujita Henry Chalfant Jaime Rojo Jaque Fragua Jonathan Khumbulani Nkala Kevin Coval Mark Jenkins Molodi New Mexico Shepard Fairey Slinkachu Steven Gutierrez Steven P. Harrington Swoon Thomas Christopher Haag