This historic week for Brooklyn and the U.S. is being marked daily by New York Street Artist General Howe at the sites where the actual “Battle of Brooklyn” took place exactly 234 years earlier.  Brooklyn Street Art is pleased to bring you daily updates on the plundering of boundaries between Street Art, performance art, and historical land-marking along with live social media updates by Kianga Ellis. All week we will travel around Brooklyn tracing the troop movements as General Howe stages small-scale battle scenes to connect us with history and possibly examine the childhood pastime of playing “war”.

To begin the week the General went down to the waterfront where Staten Island connects to Brooklyn with New York’s youngest bridge, the Verrazano-Narrows Bridge. This narrow pass through which all ships must go to get into New York City was the shore where over 20,000 British soldiers arrived today. 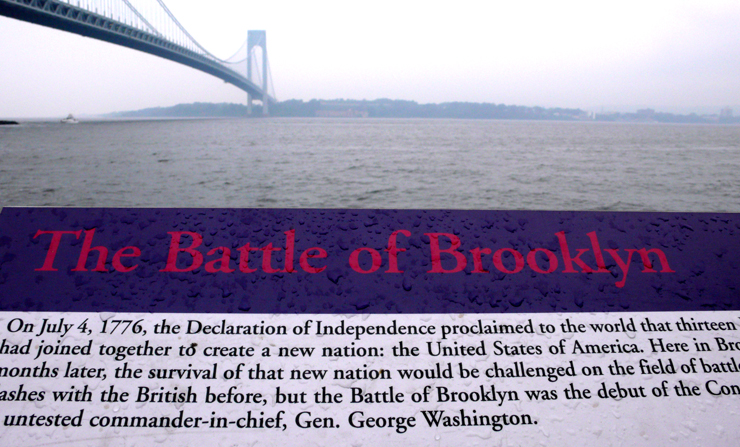 General Howe explains the events of this day thusly: 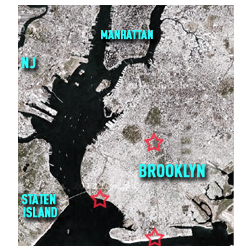 The Action: Before dawn on August 22, 1776, thousands of British soldiers land on the shores of Brooklyn, known then as Long Island. The British immediately control the entire coast from where the Verrazano Bridge is located today to Jamaica Bay. American loyalists by the hundreds welcome the large, bright-red mass of British soldiers. Aware that the long anticipated invasion had begun, Patriot riflemen withdraw into the hills burning fields and killing livestock as they flee. British General William Howe, Commander in Chief of His Majesty’s Forces in America, orders his troops to head north toward the Flatbush Pass, located in modern-day Prospect Park. 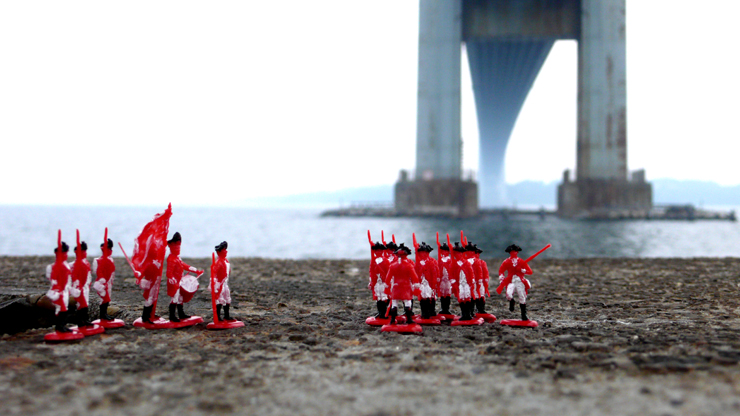 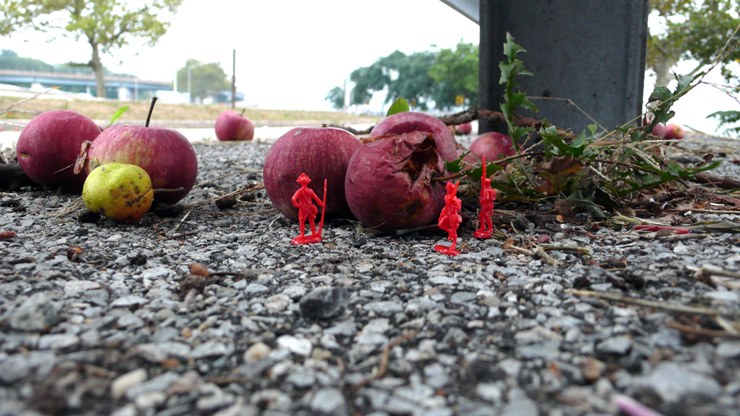 Amazingly, the history books remark on how the British soldiers were shocked by the fruitful bounty of food they discovered on the shoreline when they arrived in 1776 – and today’s installation reveals that it is currently apple season at the same location. Looking at these soldiers, the term “Big Apple” comes to mind. General Howe (© Jaime Rojo) 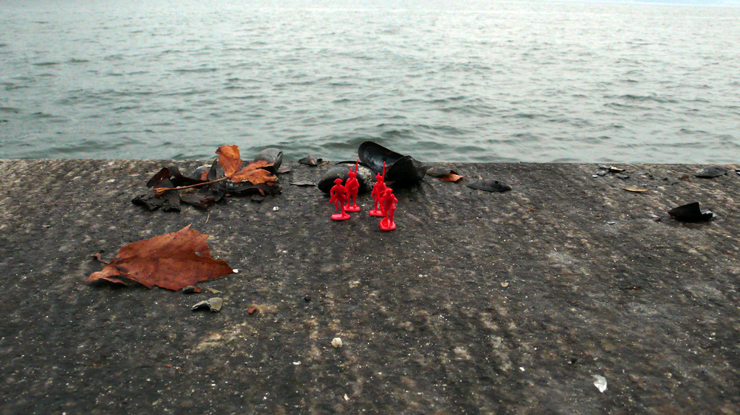 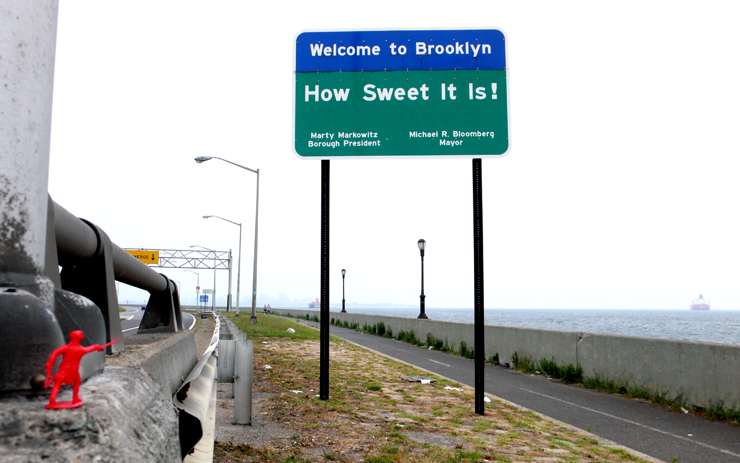 Pointing out to the Atlantic Ocean at an incoming ship, this soldier discovers Marty Markowitz has put up a sign of welcome. General Howe (© Jaime Rojo) 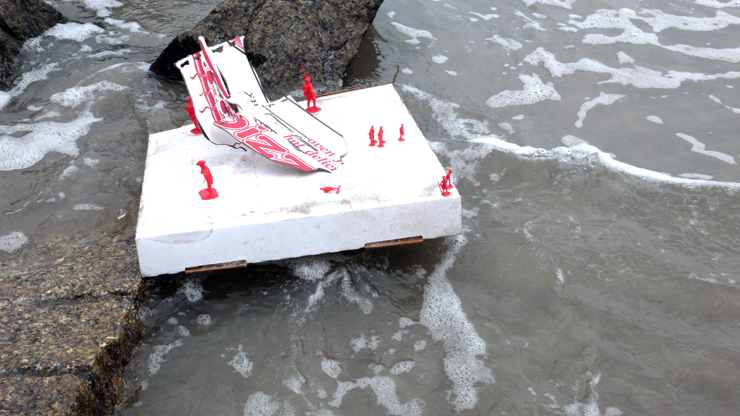 While based on historical fact, the installations inject improvisational touches from an active childhood imagination. Here General Howe fashions a pizza box as a ship with sails on Coney Islands’ beach. (© Jaime Rojo) 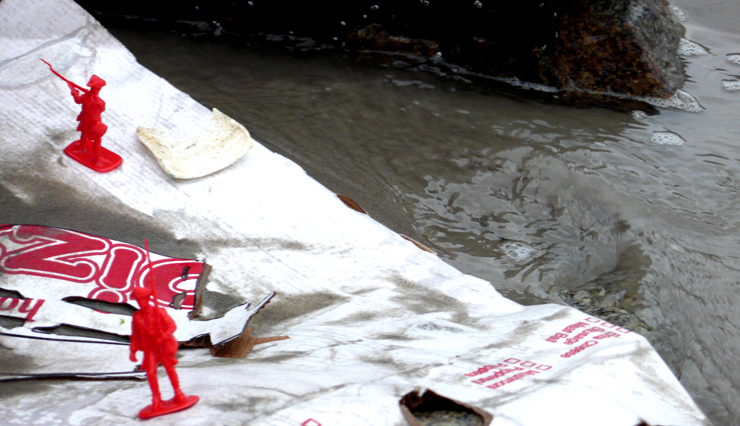 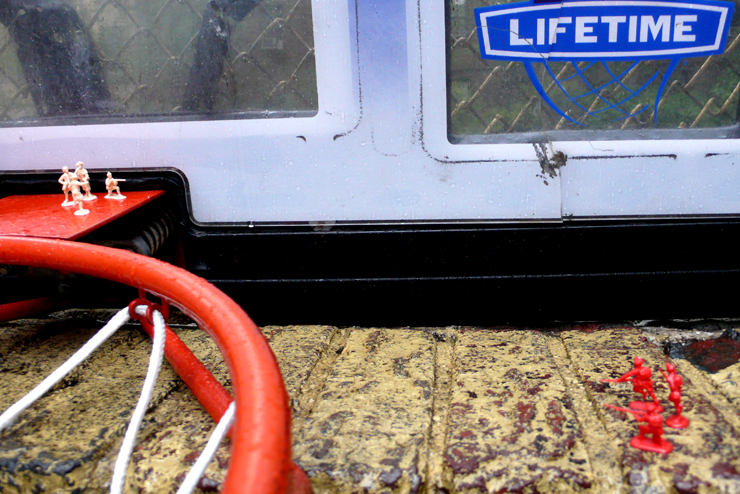