To save their reputation and do a bit of DAMAGE:CONTROL the wise visionaries at Factory Fresh have flown in Boris Hoppek and Alex Diamond from Hamburg sister gallery Helium Cowboy to stage an unforgettable show tonight in Bushwick. 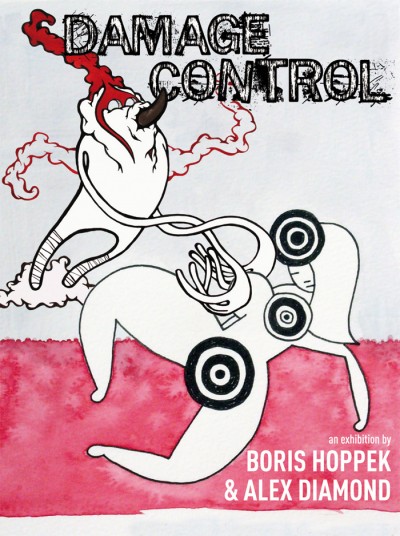 This is what they have to say about it:

“The exhibition is called DAMAGE:CONTROL – each of the artists supplied one of the words when finding a joint theme for the show. Who does the damage and who’s controlling it is hard to tell, all we can leak is that we know who contributed which word 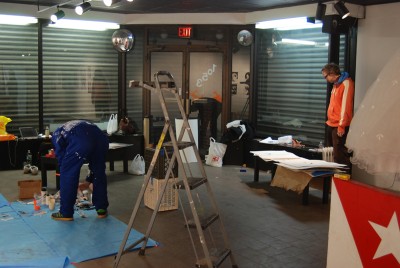 Although being close friends for a long time, Boris Hoppek and Alex Diamond have never collaborated this closely in the past. Everyone involved in the show is really happy with the result: it seems like the perfect match; the works correspond nicely, and the whole set up of the room couldn’t be more harmonic. 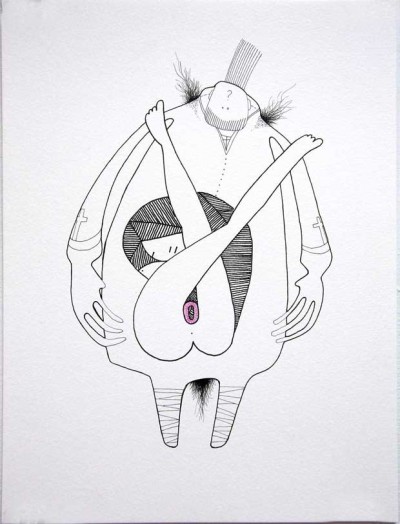 While Boris will be showing photos and watercolors, Alex brought along brand new china ink brush drawings as well as a series of collages. Most of the work has never been exhibited before and was specifically created for the Factory Fresh show. 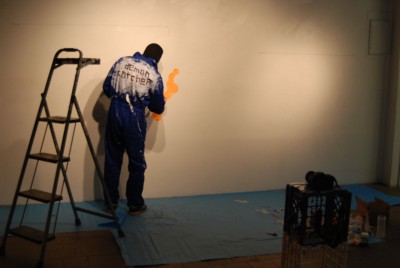 On location, Boris installed a new upskirt installation (this time you have to slip underneath a beautiful, vintage wedding dress), as well as painting one of the walls with markers. Alex has been busy creating a new piece of collage work (assembled and painted on the gallery floor). 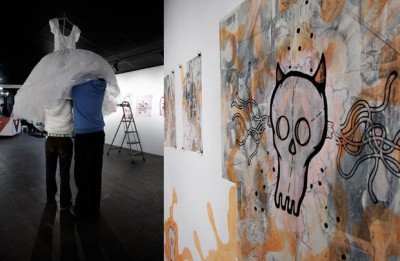 No need to shine your shoes to look up a skirt anymore! (Image ©DA Stover)

It seems to be heavily influenced by this trip, and sports quite an unusual motive compared to others. It comes on 4 wood panels, that are attached to each others, and is integrated into a wall painting, jointly with the six new collages he brought along on this journey. The work is called “Demon skull”.” 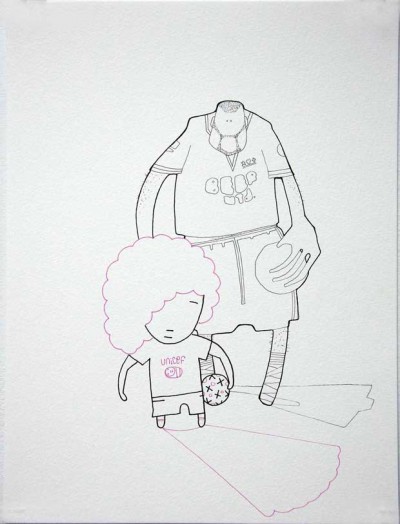 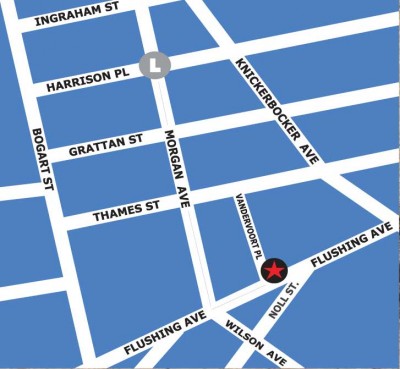 Fresh Geezers in Brooklyn: London Police and Galo open tonight at Factory Fresh
Footage of the Police in Handcuffs! The World Premiere of full-length Galo Video! FRESH Canvasses paying tribute to NYC! Blowing northward along the coast from Miami's Art Basel like warm air from...
Power and Currency: Factory Fresh
“Power and Currency” a new show curated in Bushwick’s Factory Fresh Gallery by Natalie Kates, strikes at the nexus of two words that shake out in the events of most days in New York.  On Brookly...
Coming up Next: Doomsday! Avoid + Bloke + Faro: "2012" at Factory Fresh
It takes a Village to Build a Burning Village Oh, it’s all good fun!  Piles of tires on fire, people running in the streets, acts of desperation, pestilence, unending video surveillance; This is one ...
Brooklin & Brooklyn: São Paulo and MUNDANO
Brooklyn isn’t just a borough of 2.2 million people in New York City, it is also a neighborhood in São Paulo, Brazil. photo credit: Stella Dauer And guess what?  That’s right homie-lera, th...
Winging It With ROA - FreeStyle Urban Naturalist Lands Feet First in Brooklyn
While city birds sing and traffic swells and murmurs, Street Artist ROA shows BSA how his great unsung animals are made. One of ROA's new Brooklyn birds (photo © Jaime Rojo) The eagerly anticipate...
Alex Diamond Boris Hoppek Factory Fresh Helium Cowboy