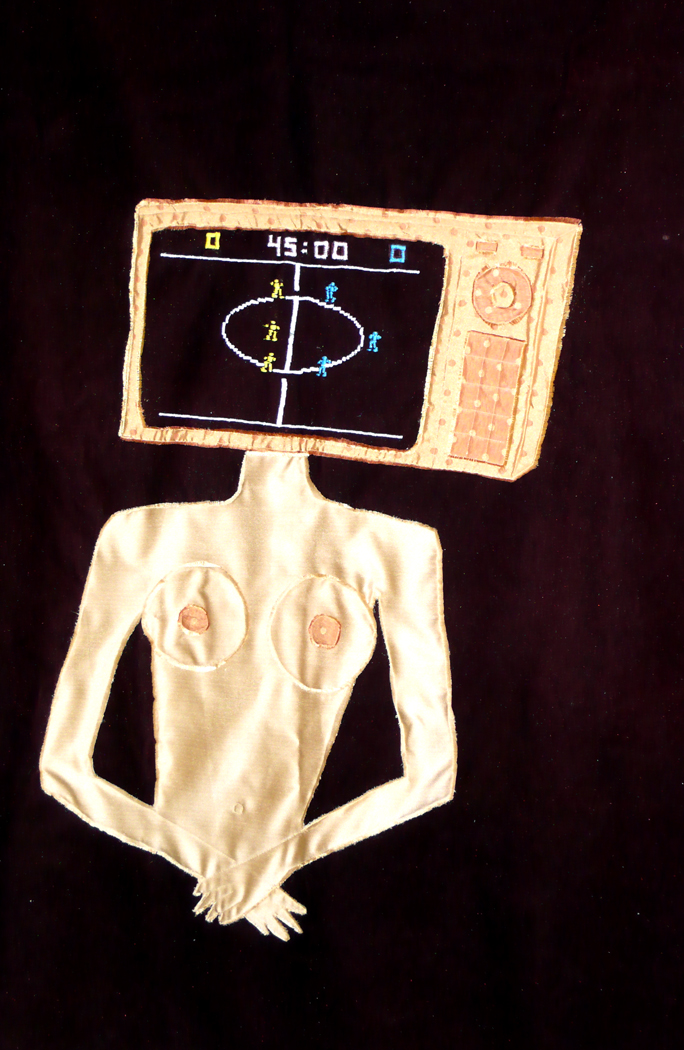 Factory Fresh Presents: Pufferella “I know You Are But What Am I” and Josh Mccutchen “Polymetrochromanticism”

It’s only a one-week show folks, and Adam has built a sit-n-spin ride that will make you blow all that Genesee Cream Ale like Linda Blair around the front gallery, so you don’t want to miss this opening! 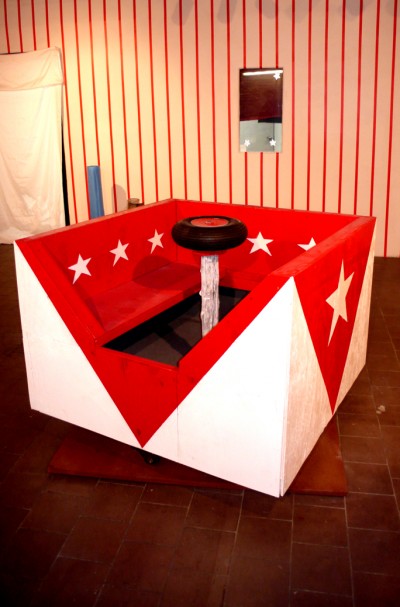 Before we go to the show, a little background; Street Artist Pufferella has played a pivotal role in the New York Street Art scene by running Orchard Street Art Gallery for 7 years with Ad Deville on the Lower East Side of Manhattan, opening the doors and clearing the way for many aspiring graffiti writers and street artists to show their work in a new public setting, many for the first time.

After losing their lease due to greedy landlords, they moved to Bushwick in Summer 2008 to open Factory Fresh, another gallery that opened it’s arms to emerging and better-known street artists and fine artists.  On her own, Pufferella has quietly established her own fine art work, consisting primarily of sewn pieces that may be more traditional flat “canvasses” or full-blown soft sculptures. 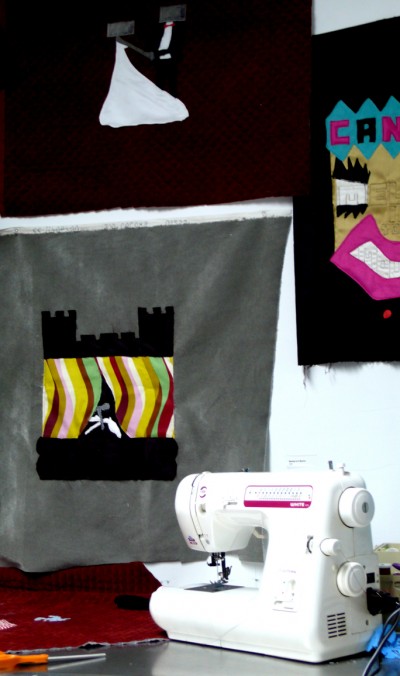 “That sewing machine is like my baby,” Pufferella (photo © Jaime Rojo)

Taking a break from the sewing machine, Pufferella shows us the inner sanctum of her office at Factory Fresh, which is carefully hung with fabric pieces for the show, effectively blocking all eyes from seeing in the window or over the counter.

The collection of new pieces are brightly colorful, boldly warm. The shiny solid shapes and figures are stiffly posed in simple arrangements, floating in awkward proximity to one another, creating a momentary scene or flash of action.  Sewn on lush fabrics, they can take special importance because of the spareness in number and bluntness of geometry.

It’s when these pieces are finished and seen together as a group that Pufferella can get overwhelmed with their significance and she questions if she has been too open as an artist.  Speaking about her art and her life, a dual set of impulses emerge – frequently warring with one another.  It may be this ongoing conflict that gives many of the pieces a raw energy that is captured in action.

Brooklyn Street Art: I don’t see as much sexual activity in this show as I thought I would.
Pufferella: Oh, yeah?  There’s I’d say a good third of the show has those themes. There are some other things going on. Like the tigers!  They are so cute I want to take them home with me.

Brooklyn Street Art: So, about these various couples in positions… do you like to imagine sexual relations in unusual places?
Pufferella: I think these are all personal things.  Stuff I’ve done or things I think about.  I’m very private but I’d say I’m a little wild in certain places.

Brooklyn Street Art: Well, this is the thing; You feel like it is very private and yet you are holding an exposition of it in a very public way.
Pufferella: Isn’t that what art is? Aren’t you supposed to put your soul into it? If I was like, “what am I doing?” then I would produce graphic design.  So for me it is that pure.  I’m not doing it to sell it, necessarily.  So that’s why it’s like, “I think it would be funny if cotton candy fell in love with carrot.” 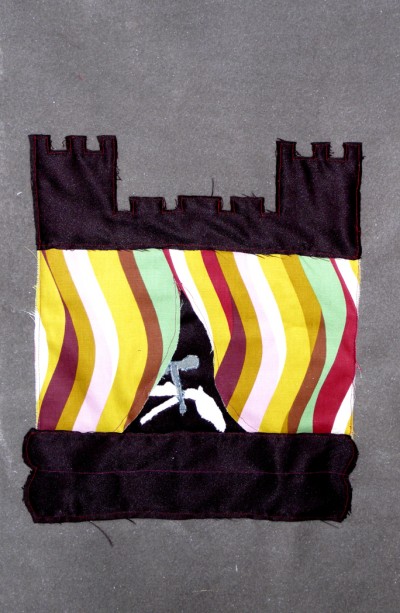 A little hanky-panky in the castle with the prince. Pufferella (photo © Jaime Rojo)

Brooklyn Street Art: Do you ever have problems or fights with your sewing machine?
Pufferella: Yeah, I mean, I have to oil it, take care of it. I know what the problems are. That sewing machine is like my baby.

When stuff falls out of place, like the pins fall out or I get sliced by stuff, I get pissed. Like when stuff moves and you get a ripple and you have to go back… I spend a lot of time fixing stuff.  But I also know what I’m doing wrong.  There’s a backing that I’m supposed to put on all of this and my mom gives it to me.  She’s like, “Why aren’t you using this?” but I don’t like the way it comes out.  It comes out so “crafty”.

So I like it to be a little messed up.  Like those kinks and things, I think for me, are what really keeps it “art”. I don’t know.

Brooklyn Street Art: So it’s an effect that you don’t like when you see it, like it has too much of a “finished” quality.
Pufferella: Well, I come from quilters too, and I went to art school and they didn’t because they were farm people who made beautiful quilts, to keep them warm, and they did them nicely.  So, I try to differentiate.  I know what that (quilting) is, and I’ve tried but I’ve come close.

Brooklyn Street Art: You are afraid of becoming too “crafty”?
Pufferella: Definitely. I think people expect this work to be “craft”. It’s like “appliqué”  – like what’s the defining line between me and appliqué?  Very little, but I’m hanging on to it.

Brooklyn Street Art: Right, there is a fine line… where suddenly someone is saying, “Can you make a pillow for me?”
Pufferella: And I have done that. Like I did Abe Lincoln Jr.’s bird. But I made it poop and poop-balls came out of it. Yeah the other thing that makes it “art” is the idea.  I think when people make quilts they look at patterns. 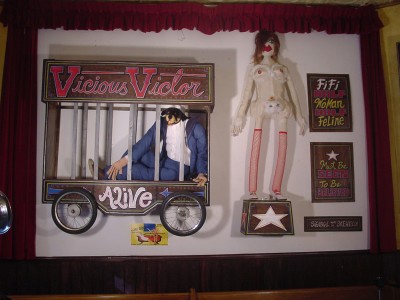 Brooklyn Street Art: Some of these themes are related to circus or performance or childhood fantasy?
Pufferella: Yeah, I guess that I feel like it is always coming back to those things. Like my 2005 show at Pink Pony, where I made a circus.  I guess that is just what I think about a lot.  Funny, carnivale, freaks.  I feel like I’m very normal on the outside but very weird on the inside.

Brooklyn Street Art: Can you give me three adjectives?
Pufferella: For me? 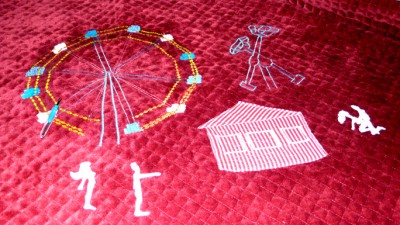 Brooklyn Street Art: Okay.
Pufferella: Like I think there is that dark humor to everything.

Brooklyn Street Art: Did you go to state fairs, or county fairs when you were a kid?
Pufferella: Yes, and I think I have that dual nature because my parents were raised on farms, but then they moved and raised us in a different life. We traveled and did all these things that they didn’t really do. So I think there is that dual thing.  Like sometimes they were having us milk cows but then taking us to New York City.  It was always that way.  I grew up in Morristown, New Jersey, which is just outside New York.  I did the whole club thing at 16, but I had these roots where I would go back to Michigan and see my Grandma. 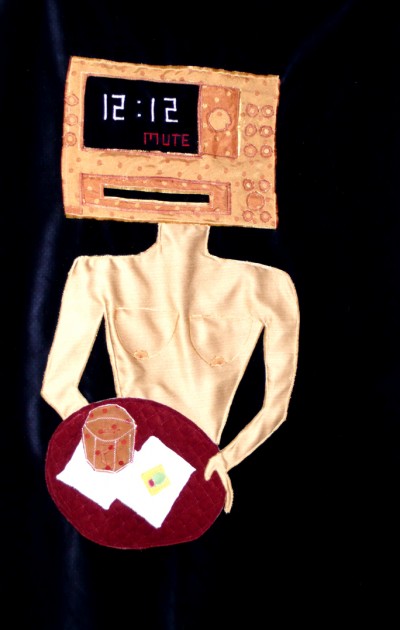 Brooklyn Street Art: Did you tell me this is the ideal woman?
Pufferella: “The Perfect Wife” Yeah, that piece is about how I don’t feel like I get heard a lot of times. Like I have to say stuff a bazillion times. I might as well be like a video game playing and I might as well have my shirt off.  That’s the whole thing with guys. Like I might as well just be serving drinks, playing music, with the mute button on. 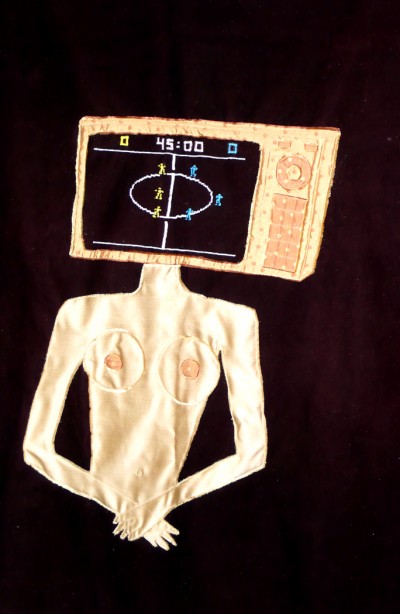 Brooklyn Street Art: What about this powerful image? Can you describe her?
Pufferella: “You Must Be This Tall To Ride” – this porn pose, like she is stripper dancing, but giving you a rule. It’s like a sign for entering an amusement park ride.  So the top of the leg would indicate the height the person must be, and then the other meaning could be for sex.  Like it could say “to ride me”, but it doesn’t.  That one came about from preparing for a show I was supposed to do with Thundercut and Gaëtane (Michaux), but it got cancelled.  So we were all supposed to do a sign. 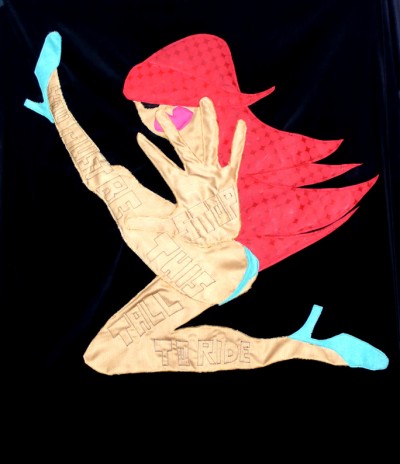 “You Must Be This Tall To Ride”, Pufferella (photo © Jaime Rojo)

Brooklyn Street Art: So it is this “come-on” pose coupled with this rejection at the same time.
Pufferella: It is, isn’t it? It could be used for a boy or a girl. She’s very bold.  I think that’s the boldest piece I’ve probably done, with all that hair. 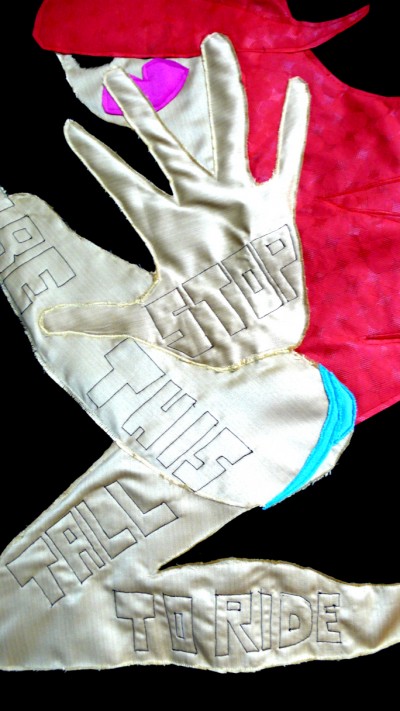 Detail from “You Must Be This Tall To Ride”, Pufferella (photo © Jaime Rojo)

Brooklyn Street Art: It’s full of energy and action and movement and power.
Pufferella: Yeah, it’s funny, I have a hard time looking at that one.  Sometimes when I’m all done, I actually cry. I don’t really like my work.

Brooklyn Street Art: Really?
Pufferella: Yeah, like I had a breakdown. Just looking at all of it and what it all means, and really kind of having that put in your face, in a way, it’s like “maybe this is the reality”. Like “What am I trying to say? Why is this what comes out of me?”

Brooklyn Street Art: It’s revelatory, perhaps.
Pufferella: Yeah, I guess. Like I do the drawing, and I guess it doesn’t mean as much as what it ends up being in the end when it comes to life.

Brooklyn Street Art: That’s interesting how it causes discomfort and emotional turbulence.
Pufferella: Yeah, I probably wouldn’t do this show if I could back out now.  Now that it’s all ready to go I would probably not show it. Because it is like “what am I doing?”  The work is very personal I guess.

Pufferella has been sewing creations for the front room and Josh McCutcheon will be showing himself publicly for the first time in the back room.

And now for your viewing pleasure, a promotional video for the show done by Pufferella’s dearest friends at PLAZTIK MAG

The Artwork of Josh Mccutchen

Josh McCutchen lives and works in Bushwick, Brooklyn and this is his debut show at Factory Fresh. His narrative works are about mythology, science & technology, social commentary, body image, polymorphic shapes, and abstract urban landscapes.

As a television personality Josh hosted “Does This Look Infected” on MTVU network from 2005-2007. When he’s not painting modern masterpieces, Josh is the host, writer, producer, and editor of the Josh McCutchen Show. You can see him in action at http://www.youtube.com/joshmccutchen

Pener Paints a "Kaleidoscope" at School in Olsztyn, Poland
In preparation for the new academic year, street artist and muralist Pener is painting on the wall of a primary school in his city of Olsztyn, Poland. Bartek Pener Swiatecki. "Kaleidoscope". Olsz...
Tristan Eaton and Summer "Intermission" on the Bowery/Houston Wall
And now its time for a mid-year intermission to pause and reflect upon the events that have happened in the first act. We've had plenty of treachery, intrigue, jailbirds and back alley suspense. Clear...
Swoon Flying in "Cicada"
The three-dimensional figures cavort with the thickened and filigreed waves of memory and emotion. They emerge from the wall, flicker across the screen, mesmerizing. Swoon. "Cicada" Deitch Gallery...
Sten & Lex in Paris For Le M.U.R.
Le M.U.R. is a Parisian program of liberating billboards that since 2003 has been formally inviting artists to takeover spaces that would normally be filled with advertisements. So far this year they’...
Nuart X Aberdeen x BSA: Dispatch 1
This white and grey skurry appears rather plump as he waddles across the stone road in Aberdeen toward the cherry picker that holds Jasmine from Herakut aloft as she paints the new piece on the concav...
Abe Lincoln Jr. Ad DeVille Factory Fresh Gaëtane Michaux Genesee Cream Ale Jaime Rojo Josh McCutchen Linda Blair Orchard Street Art Gallery Pink Pony Plaztik Mag Pufferella Thundercut