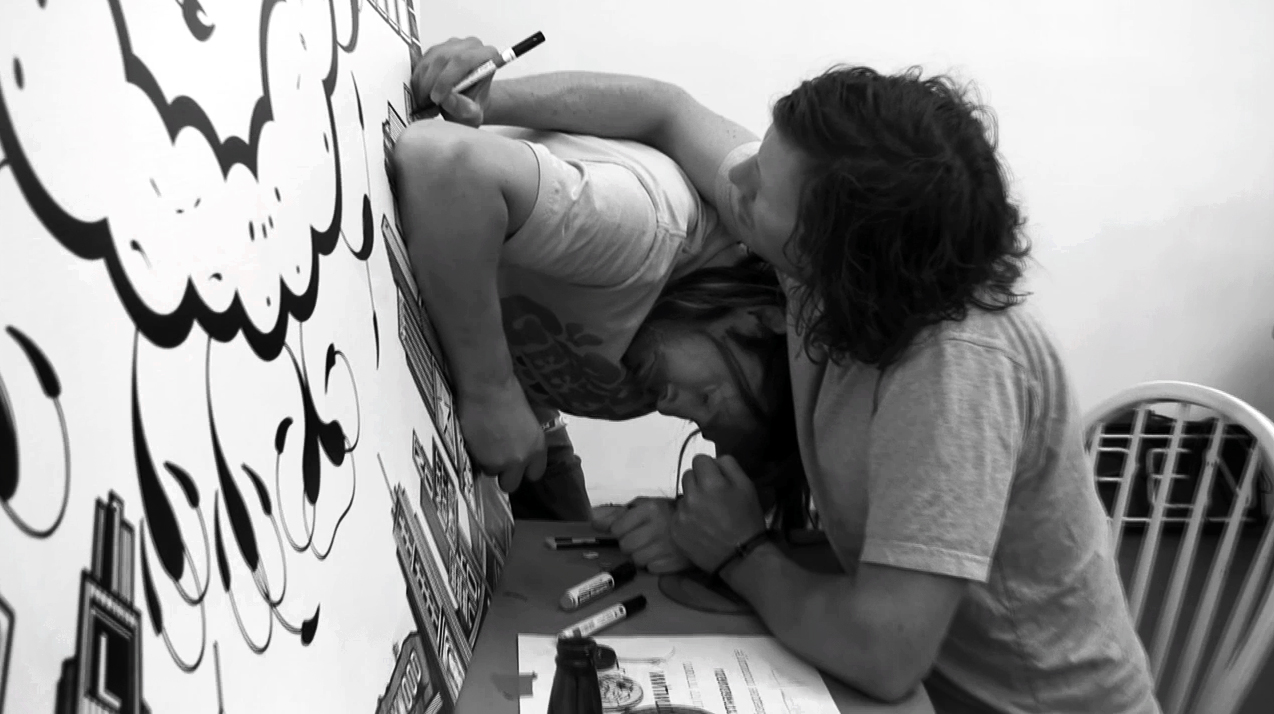 Footage of the Police in Handcuffs!

Factory Fresh welcomes The London Police, who get themselves into the oddest situations while in pursuit of art. (video still courtesy London Police)

A tribute to their host borough, street artists The London Police combine Brooklyn architecture and a stylized central discombulation of their “character” (photo Steven P. Harrington)

Blowing northward along the coast from Miami’s Art Basel like warm air from a subway grate up my homegirls’ skirt, this trio of street art brothers are some really fresh geezers here to warm you at Factory Fresh.

It’s The London Police and Galo – a motley joyfest of brotherly jest in color and black and white. Their hand work is a contrast of free-form (Galo) and pre-meditated crisp line control (London Police). There are still-wet canvasses and the newly constructed Factory Fresh Screening Room to see two cinematic features. Helpfully, the entertaining videos in this show are not conceptual, so you won’t need a brochure to accompany them.

This quickly mounted show (3 days) is only possible because these guys have a bit of mileage under their belts (12 years and 50 countries, in Chaz’s case), are complete professionals, and they know how to turn out the canvasses while having fun.

Galo was previously a graphic designer who decided to dedicate his energies to his art, which is colorful, line-based, and concentrates on what he calls his “character” – who really turns out to be more than one guy.

“This is my character. I just draw until I’m satisfied, you know? I think it has a sort of graphic balance. Normally I’m pretty flexible with myself. I like to have the faces squeezed. It doesn’t matter if they have the perfect eye. It’s pretty much informal,” says Galo.

“It is a sort of family because I first started with the one character with the round eye and slowly I started to draw the same kind of lines but with different kinds of eyes and different position of the mouth and so let’s say that they are three brothers. They are always changing”

One of Galo’s favorites from the show. ” Normally I don’t paint big canvasses like this because it is troublesome to ship them. So I shipped the canvasses and I re-framed them here.” (photo Steven P. Harrington)

Upon his recent return to Brooklyn, Galo retrieved some old paintings stored here, which he says he wants to light on fire. “These canvasses basically disappeared for four years. They were in the storage of a friend of a friend who moved to Mexico. So I didn’t see them anymore, they just got ruined. Just to clean my hands I just want to burn them. So I nailed them together. I’m going to burn these and we’ll see what happens,” says the pyromaniacal artist.

Galo stands with a stack of canvasses destined for destruction in the back yard of Factory Fresh, which he painted in about 3 hours with a big fat cap. (photo Steven P. Harrington)

Galo shows some technique with the can. “Miami was great, absolutely amazing. The best I’ve ever seen – so many people out there. I painted a really big wall so I was busy painting every day, but for sure in the evening it was just partying, hanging out with other artists.”

Galo peers out through his work in this still from his new full length video premiering tonight at Factory Fresh.

The London Police are Chaz and Bob – Bob does the crisp linear cityscapes and architectural detailing, and Chaz draws the “LAD” character (who is based loosely on the man himself), now happily morphing and shape-shifting into blobs and motifs that echo the original little happy fella they are known for.

On the topic of the endless interpretations and generally ripping apart of the original theme, Chaz explains that he felt their fans might have gotten a bit bored with just the one character, “Once you’ve done one head and then two heads and then three or four heads…after going out and doing the same thing it got to the point where I wanted to go out and do ten heads, fifteen heads.”

This year they limited themselves to strictly black and white, but do not rule out using color in the future.

The City according to the London Police; “”We’re really proud and pleased with the work we are doing this year. We enjoy it, and I don’t think you can really ask for more than that. We work a lot on these paintings. It takes a long time. Everything you see here is doubled, because we use the ink pens. The first layer leaves it a little bit shallow so it needs to be doubled up,” says Chaz (photo Steven P. Harrington)

A student of architecture, Bob worked for an architectural firm a few years ago, which sharpened his acuity, “I’m crazy about architecture but as a living it’s a little bit stale. But it was really good because it was so in-depth that your drawing gets better. Your understanding of architecture gets better and your world grows. Now I can pretty much close my eyes, remember an image and then draw it from my brain,” he says.

And about incorporating the architecture of his host city into TLP’s work, ” I did quite a lot of actual research, visually, and reading up on Brooklyn. The contrast between Manhattan and Brooklyn, obviously is huge. But I like the rawness of Brooklyn. I always have. I’ve been here a few times and I like that you have the low-level housing, three or four stories high, and then you’ve got this huge factory next to it. It’s really bold. That’s what is iconic about Brooklyn.”

In this still from the “Brothers in Arms” documentary to be screened this evening, Chaz takes a little catnap as his hand-cuffed art-mate labors on their deadline. (image courtesy the artists)

“In this show we are showing a documentary film we made in L.A. which was basically us handcuffed together twenty-four hours a day. We lasted five days. It was pretty intense. We didn’t break. I thought there would be a breaking point where I would just need personal space, especially at the obvious times”

The “Brothers in Arms” flyer is posted in the gallery just outside the cinema. Check your local listings for times.

Produced by Ashton Kutcher and Jason Goldberg, the brief documentary shows the “brothers” in a variety of natural and staged situations that come off as endearing, entertaining, and a bit goofy.

“It produced a funny, nice documentary so when people come to the show tonight there will be a bit of cinema about every 20 minutes and you can watch the film about Galo, and the film about us handcuffed together, which is stupid, corny, and funny,” says Chaz.

Two new smaller canvasses feature scenes inspired by New York disaster movies that have proliferated in the last 25 years. Both Chaz and Bobbie site the movie “Ghost Busters” as a formative influence in their artistic careers. (The London Police) (photo Steven P. Harrington)

Chaz works on a canvas patiently while handcuffed to Bobbie, who is getting a tatoo. “It’s really simple, it’s just my girlfriend and my son’s name in script. She was really gobsmacked. She really loved it. I was really fearing showing her, and she was really touched,” says Bob. (still from “Brothers in Arms” courtesy the artists)

About the movie, we discovered that really the idea was Chaz’s and Bobbie just went along. Was there a point when Bobbie regretted the decision?

Says Bobbie, “Yeah, about after five minutes. I was having a terrible time”

But don’t mind this brother, because later in the conversation, he reverses himself and says it would have been great to do it for 2 or 3 weeks. “We wanted to do more than five days but the problem was that show was to open so that was the maximum that we could do but if had had more time that’s when you would have gotten some really good material.  It was all novelty, it was all fun. If you went to a party people were really interested – but it would have been great if you could have gone on for two or three weeks.”

Were people waiting for one or both of them to have a meltdown? Says Bob, “Yeah, that’s what they were hoping! But it was five days and because we’re best friends it was never going to happen”.

WALL\THERAPY 2015 : Surrealism and The Fantastic
Surreal is the way the world is portrayed across all of our devices today. It may be the shrinking staff and budgets of newsrooms who are veering ever closer to the sensational or simply the yellow j...
BSA Film Friday: 06.04.21
Our weekly focus on the moving image and art in the streets. And other oddities. Now screening:1. Homily to Country by Artist JR2. Jersey City Artists at Work Painting for the first Mural Fest...
BSA Images Of The Week: 04.19.20 / Dispatch From Isolation # 28
Welcome to BSA Images of the Week! Where is the People's Bailout? Why has the bailout that was promised to small businesses already run out? Why is congress on vacation? Why is Biden staring ...
New Mural for ConectArte & United Nations World Food Programme in San Salvador
At its core, the community mural performs a very important role in unifying a neighborhood by focusing attention and coalescing around a common sentiment. Whether social, political, or poetic, they gi...
Entes Y Pesimo del Barrio, New from Peru
Peru's Entes & Pésimo are back in Lima after a nice few days painting in Miami last month and have brought their eye popping color palette to the side of a handful of homes that line the hills of ...
Brothers in Arms Factory Fresh Galo Steven P. Harrington The London Police