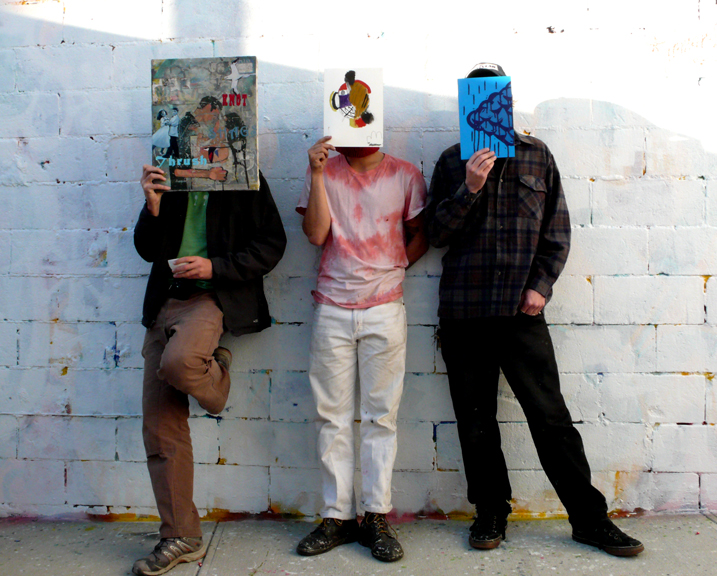 “A Hounding Obsession”  is a great name for this show because it aptly describes the ever present drive that these artists feel to make new art and to get it out in front of an audience.  Usually it’s on the street, but this week it comes together at Factory Fresh in Bushwick.

In a way it’s a reunion show, like the Beatles!  Okay, not the Beatles, but they are a fab four that used to work side by side; now have split to different parts of the world.  Only DarkCloud and Deeker are still in the Grimey Apple so the other two have flown in just to install for this show and to hang out again with old friends.

A recent visit to the lush underground FF Studios with the artists yielded a number of raucous  stories from the four about past wild excursions painting walls and ceilings in an abandoned recycling center, a burned out embassy (complete with chandeliers and 12 foot mirrors), dumpster diving for canvasses, and a discussion on how to draw females into the gallery Friday night.

What to expect at the show? Ask the artists –

Armer: I’m gonna try to go big. The back wall is kind of large.
Deeker: Yeah we’re just going to do a good hard smash-down of the whole thing.  We don’t really have a plan on it.  We’ll just get a whole bunch of paint and do it.
DarkCloud: I’ve got a couple of pieces on glass that I’m really liking. I’ve been working on glass a lot and I just like the way they look.
GoreB: My pieces for this show all start off with Audubon-style bird paintings and I started mixing fonts with them, and each takes off with stories in it’s own direction.  There is one menacing bird that looks like it’s going to pluck your eyeball out so that’s pretty cool.

“I had this really cool book with thousands and thousands of birds and I love picture books like that, ” GoreB (photo Jaime Rojo)

Deeker: For like two solid years Gore and I were painting outdoors, indoors, finding fuckin’ huge canvasses and putting them in our bags and bikIng them home. Then we’d just mess them up and go back and hang them up outside somewhere.
Goreb: There was one time we were painting with images based off of a – what was that photographer guys’ name that we did all those paintings and shit? We found all these old photographs that he had dumped out up on Bedford, like 4 x 8 foot big…
Deeker: Yeah, gigantic
Goreb: Yeah I don’t remember his name but those were actually some of the first collaborations we did – on those photographs. That’s really when I first met Celso and everybody.  (To Deeker) I actually really first met you creeping around the recycling center lot.
Deeker: That was the second time. Actually the first time was fucking drunk on the street.

But we digress. Each artist in “A Hounding Obsession” has a background in graffiti at some point and now continues to explore the street art thing.  BSA wondered if NYC was still hot.

Brooklyn Street Art: Is New York still one of the best places to put up work?

GoreB: It’s a great spot; there’s so much neglect and cutty spots, so much discovery as far as strange places around the city.  Like me and Deeker are always talking about the places you can creep to in Queens and Brooklyn.  I think it’s even better to do your work there now because the street art scene is too popular.  You do anything in Williamsburg or on Bedford or in Soho and people find it right away and it gets on the internet but it’s kind of not what it should be about.

Brooklyn Street Art: What should it be about?

GoreB: For me it’s about withdrawing my art as much as possible and finding little nooks and crannies.

Deeker:  I feel like the one or two kids that find your stuff up in the most random of places – like their reaction is worth more than somebody who finds it right away and ten people go and photograph it and everyone talks about it.

Armer: It’s really about spots. I like spots in high traffic areas but I also like painting in strange places that only young kids might go see.

Brooklyn Street Art: And how did you get the name DarkCloud?

DarkCloud: The concept for DarkCloud came because I was hanging out with a good friend of mine who was always in a shitty mood at one point in his life. So we started joking about how he was like the cartoon with the cloud over him always following and over his head.  He was more of a fine art painter and I was only into graffiti solely and I didn’t really want to do anything but graffiti.

He kind of painted his own version of a dark cloud and I was just like, “What is that”?  He said, “That’s the dark cloud”. I was like, “No that’s not what it looks like!” So I painted my own version and I was so kind of hooked, obsessed with getting work out and I was really into the concept of doing bolt ups on signs.  When I first started I only wanted to do them on signs. “

GoreB, Armer and DarkCloud pose while Deeker is looks for a saw (photo Jaime Rojo)

Thus the Hounding Obsession we have heard about, and the name of the show.  Each one of these artists got hooked a long time ago on making street art, and while it may sound like an exaggeration to call it an obsession, it’s not a far stretch to call it that.  Listen to Dark Cloud…

Dark Cloud: When I first moved to the city that’s how it was. I grew up in Vermont and when I was in Boston I was instantaneously overwhelmed by how people accomplish this stuff. I was so interested right away that it became like an obsession.   Everything else I was into started to fade. It kind of took over. It was too much fun. And the mystery behind it was so much fun.

GoreB: Yeah that is probably a difference between what we do and most artists – we want to get our art out there and don’t want to have it anymore. I think that because of what we’ve done before we have this lack of a feeling of ownership that pervades all of our work. It’s very apparent in how we put it on the public. I think that feeling also comes from that ability to let go of it so easily. Anonymity is powerful too because it raises questions about why the piece is there. You round a corner and you have no idea who this person was or why it was created and it causes a lot more mystery that you wouldn’t get otherwise. It veils the work in mysterious ways.

Armer thinks that girls in particular are going to like this show and encourages them to come.

Armer: This is kind of my first show indoors, and it may be my last. So if there are any ladies that are interested in Armer, they should definitely roll through.

Brooklyn Street Art: So this is a one–time-only opportunity of a lifetime?

Armer: Yes, I’m retiring after this. Not from the streets though.

And a few little hits from the Streets….

A botanical Deeker from a few years ago (photo Jaime Rojo)

GoreB coming in for a landing (photo Jaime Rojo)

“A Hounding Obsession” is opening Friday

Judith Supine Returns: A Cowboy With a Rattle Snake in His Purse.
Cancer and fashion. Cancer and rugged virile outdoorsmen. Lifestyles of the rich and cancer. Judith Supine is swaggering back to the street in rawhide stilletos, shooting out a new a campaign of...
DuorOne and Elodie: This Is Us
About midway through this video, the artist is lifted into the air above the street, away from walls, suspended – and the audio is that of a heart thumping quietly, uncrowded, unfogged, unadorned. ...
Fintan Magee, Lonac in Process at No Limit/Borås: Dispatch 1
Fintan Magee, Lonac in Process at No Limit/Borås: Dispatch 1
BSA Images Of The Week: 02.04.18
Stomping through the streets of New York Friday looking for new Street Art and graffiti, the cold and the wind reminded us of a saying we learned from the Norwegians during recent trips there: "...
"Sprout And Ruler": Gola Hundun Nude In Abandoned Masonic Temple (VIDEO)
Street Artist Gola Hudun likes to get naked and frolic around abandoned old buildings making art. But then, who doesn’t? Gola Hundun for Artesano Project 2016 in The Dominican Republic. (photo ...
Armer Darkcloud Deeker Factory Fresh Gore-B Jaime Rojo Steven P. Harrington