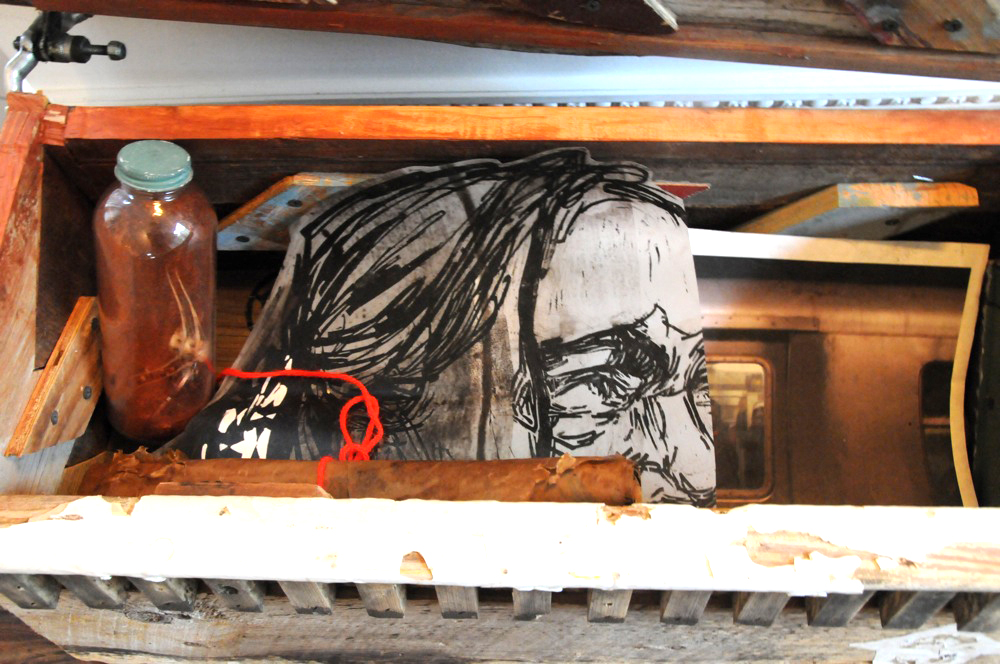 After spending most of 2009 in preparation, Michael “RJ” Rushmore is one week from the opening of “The Thousands”, a retrospective survey covering artists of the last few decades that led to what we’re calling “Street Art” today.

As editor and author of the popular blog Vandalog, RJ has been taking readers on a tour of the Street Art scene from his unique perspective.  Encouraged by his father, an avid and prodigious collector of street art, the recent high school graduate has labored for much of the last 5 months to pull together this show – reaching out to artists, collectors, authors, publishers, you name it.

When RJ first told us about his idea for a “pop-up” show in London, we thought it would be a small affair with perhaps one or three of the larger names and examples of work in an inflatable shop on cobblestone streets. But like so many young people energized by the excitement garnered in an exploding new movement, RJ has worked feverishly to grow this show into what he hopes will set a standard.

A tribute to his dedication and sincere regard for the work and the artists, “The Thousands” will feature many of the antecedent contributors (or pioneers) to the scene (Jenny Holzer, Blek le Rat, Futura 2000) as well as the better known artists that have come to symbolize the current explosion that began in the first half of this decade (Swoon, Banksy, Shepard Fairey) and many others of equal interest.

As if throwing a show of this scope was not enough RJ also created a book to accompany the show, published by Drago, one of the few small presses that have seriously and knowledgeably  documented the growth of the graffiti-to-street art scene.  With dedication, focus, and maturity, RJ navigates the back alleys and side-streets to bring this show in the heart of London to fruition.

Brooklyn Street Art: What sparked your interest in curating this show of Street Art? How did the whole process start?

Michael “RJ” Rushmore: I think it was an idea that I’d had brewing in the back of my mind for a while, but I wasn’t taking it seriously until last January when I met with another street art blogger who proposed a similar idea about a having a street art retrospective. Eventually, we went our separate ways and I continued to develop the exhibition further. This is the show that a major museum should put on, but so far nobody has, and I hope that The Thousands helps to change that.

Brooklyn Street Art: “The Thousands” – is this a reference to the rise in this new wave of street art since 2000?

Michael “RJ” Rushmore: While probably 95% of the show is work from the last ten years, that isn’t where I got the name. It’s probably a more succinct explanation though.

The show’s title comes from a short story by Daniel Alarcón called “The Thousands”. The story is about this community that is built by society’s outcasts and dreamers and they build their city out of the discarded and disused materials of the city they used to live in. So that reminded me of street art and the street art community.

Brooklyn Street Art: Are most of the pieces in the show privately owned?

The process of finding work has at some times been a challenge because I don’t know every street art collector in England, but it’s also been a unique opportunity to view some truly spectacular collections.

Chris Stain will be represented in “The Thousands” (photo Jaime Rojo)

Brooklyn Street Art: What piece surprised the hell out of you?

Michael “RJ” Rushmore: I’m saving pictures of this particular piece until after opening night, because I want people to come into the gallery not knowing exactly what to expect, but Roa’s piece is very cool and different. When Roa was in London recently, we spoke about his piece for The Thousands. He told me to wait and to trust him, that it was something special, so I did. Then he sent me the jpegs and I was definitely surprised. All I will say for now is that the piece is on venetian blinds.

Brooklyn street artists Faile will be in “The Thousands” (courtesy Drago)

Brooklyn Street Art: The show also has a handsome book to accompany it. What was the experience of putting it together?

Michael “RJ” Rushmore: Everybody at Drago, my publisher, has been extremely supportive of the show and the book. I would even say that Paulo, Drago’s founder and head guy, was the first person to actually believe that The Thousands was going to happen and not be a complete train wreck. So working with them has been good fun. But the process of putting together a book in such a short amount of time was very stressful and even led to a few days of working 12 hours straight on the layout and design.

The best part about the reading book was also my favorite thing about putting it together. The book is split into sections, and most sections cover one artist. Since everything was already organized by artist, I was able to get a number of other artists and art world personalities to write about their friends and favorite artists. For example, Know Hope has written about Chris Stain and Elbow-toe has written a piece on Veng.

Brooklyn Street Art: The Swoon Box for “The Thousands”; Did she construct the box herself or was it a found box that she then later decorated?

Michael “RJ” Rushmore: I’ve never asked Swoon, but I would guess that she constructed the chest. It looks like the wood is salvaged from a bunch of different sources, and the hinges are so mismatched that the lid can’t sit parallel to the walls of the box.

Brooklyn Street Art: It could be a time capsule, or a lock box of mementos and inspiring objects. What do you think?

Michael “RJ” Rushmore: Right now, I think of it more like a lock box, but 15, 20, 30 years from now… the meaning will probably change with time as street art and Swoon become more or less important. Maybe one day Swoon will be written about in art history books and the box will be seen in an entirely different light. But at its core, and for my family, it will always see it box as a lock box.

There is this old deerskin chest in my house that my family calls The Treasure Box. It’s been in my dad’s family for generations and dates back to some time in the 1800’s. It’s full of old letters and locks of hair and things like that going all back though more than 100 years of Rushmore family history. My family and I see The Swoon Box as very similar to our Treasure Box, so we will always see The Swoon Box as full of mementos and not just a piece of art history.

Brooklyn Street Art: What’s your favorite object in the box and can you describe it for us?

Michael “RJ” Rushmore: I usually like to get a behind the scenes view of things, so my favorite pieces in the box are the sketches for pieces that eventually became familiar Swoon images. In particular, I think the drawing for Zahra is a favorite. The sketch is beautiful, the end result is one of my all time favorite images by Swoon and I happened to meet Zahra earlier this year as well as her child.

The Zahra sketch is pretty abstract, you can tell that there is a woman, but it’s really rough and seems to be more about the colors than any details about Zahra’s features. Without the image of a rising sun that is in both the sketch and the end result, you wouldn’t even connect the two pieces.

Brooklyn Street Art: If you have a show in ten years called “The Teens”, what do you think we might see in it?

Michael “RJ” Rushmore: What really interests me right now and what I’ve been noticing lately is the continuing fusion of graffiti and street art. In most cities that have graffiti and street art, somebody is trying to merge the two cultures. In London some of those artists are Part2ism, Sickboy, the Burning Candy crew, Kid Acne, ATG crew, Elate and Word To Mother. Maybe that’s just my particular interest, but I’ve heard Pure Evil say that he is seeing something similar.

So if my taste is anything to go by, a decade from now I would like to see a show with classically trained painters showing off their lettering style and hard-core train bombing kings painting with a brush and telling everybody why Lee Quinones is their hero, except we won’t even notice the supposed role reversal I’ve just described.

And of course, since I’ll be nearing 30 years old, I’d want to include some artwork by actual teenagers to help support the next generation of street art/graffiti/whatever we’ll be calling this in ten years time.

What are you looking at? (Swoon courtesy Michael “RJ” Rushmore)

Images of the Week 01.29.12
The streets have been seeing an uptick in socio-political messages recently, whether because of the Occupy protests, or because artists are exercising their speech in low cost, low-tech, person-to-p...
BSA "Images Of The Year" for 2016 (VIDEO)
Of the thousands of images he took this year in places like New York, Berlin, Dresden, Moscow, Marrakesh, Detroit and Miami, photographer Jaime Rojo found that the figurative image still stands prom...
I Know there is AdHoc: Chris Stain and Armsrock (last installment of 3 interview posts)
Tonight marks two occasions; Ad Hoc Gallery's last large-scale opening after blasting open the doors of Bushwick in 2005 to a new audience for street art, urban art, graffiti, tatoo, pop surrealism,...
Swoon "The Road By Walking" and Artist Talk with BSA
An Inside Look at The Imagination and Energy of Swoon and "The Road By Walking" This is how the road is made. Swoon invites you to take another step with her. It’s been an enormous success this week...
Snapping Street Spirit at Miami Art Basel 2013
Miami was sunny and warm all weekend! New York had two snow-related car pileups overnight and a two-hour snow/sleet delay for schools this morning. Thus we explain the attraction of an annual art cir...
Adam Neate Aiko Anthony Lister Armsrock Banksy Barry McGee Bäst Blek Le Rat Burning Candy Chris Stain David Ellis Elbow-Toe Faile Futura 2000 Gaia Herakut Jenny Holzer José Parlá Judith Supine KAWS Know Hope Michael "RJ" Rushmore Nick Walker Os Gemeos Roa Sam3 Shepard Fairey Skewville Swoon The Thousands Vandalog WK Interact