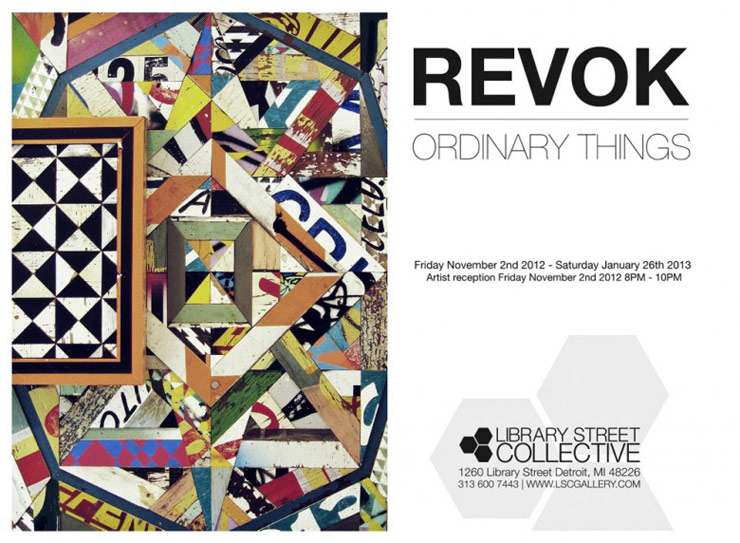 Please join us in Detroit, Michigan this Friday, November 2, 2012 for

The artist reception will take place on Friday, November 2 from 8–10pm.

Never in the history of art has a new genre become so adventurous, honest and powerful in such a short time.  The artist REVOK sits at the forefront of this movement.  His dedication, skill and determination have garnered him the respect and adoration of his peers.  His meticulous attention to detail and willingness to step outside of the lines and his comfort zone not only make him a rebel, but a leader, a pathfinder and a trailblazer in the graffiti art world.  Now as a fine artist, REVOK does this with grace and craftsmanship. Rearranging the memories, messages, words, warnings, colors and textures into coherent patterns with an honest and meaningful message.

These most recent works by REVOK are of particular importance for the city we call home, the city adopted by this artist. Each work consists of material cultivated and cultured in the city of Detroit. Each piece masterfully placed  among  its neighbors to tell a story of growth, inspiration and triumph. Each piece displaced from an urban tomb and certain death, given new life in a work of art that reminds us, exactly how beautiful this city is.  It signifies a rebirth of rebirth, a preservation of decay, encapsulating time and propelling it into a new age.

A one woman urban renewal project, Street Artist Gilf! has been prettifying the decay in a few cities over the last year or so with hand made fluorescent blooms. Not purely decorative, she thinks of them as sculptural, a public works project, and a sort of rorschach test that reveals as much about the audience as the artist. As with any artworks put out on the street, the public will render a verdict. In New York, they ride for about a minute before someone rips them off the wall – to take home in many cases. Also, New Yorkers don’t like “pretty” as much as they like tough stuff – skulls, violence, brooding, etc. With recent blooms popping up inside abandoned buildings, it will be interesting to see how long the garden grows.

We’ve collected a number of these for you to look at together, a sort of urban bouquet for Tuesday. While not wholely representative of Gilf!s various ventures on the street, these installations have a certain signature that’s revealed through these shots from Brooklyn, Baltimore, and Detroit. 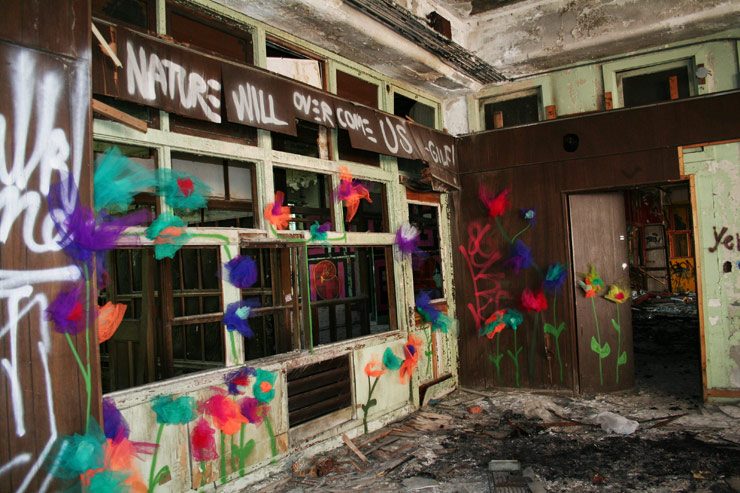 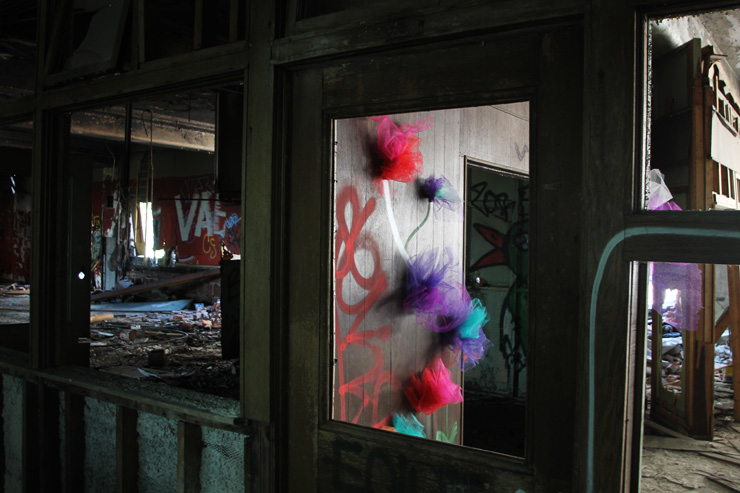 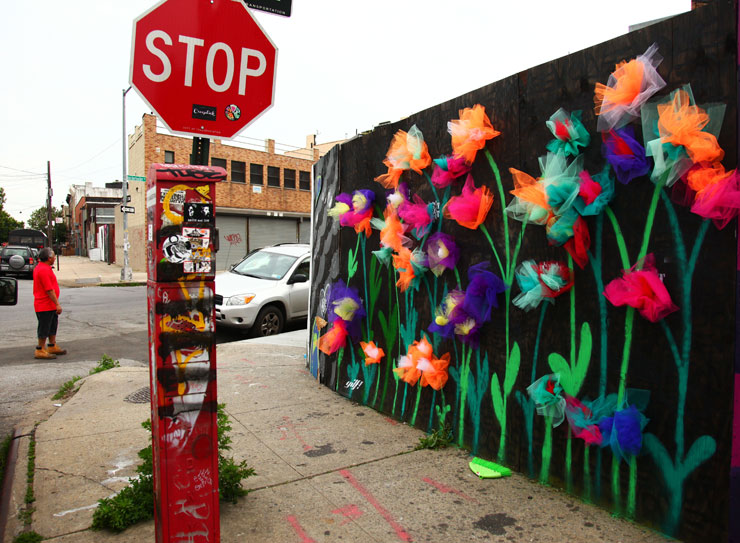 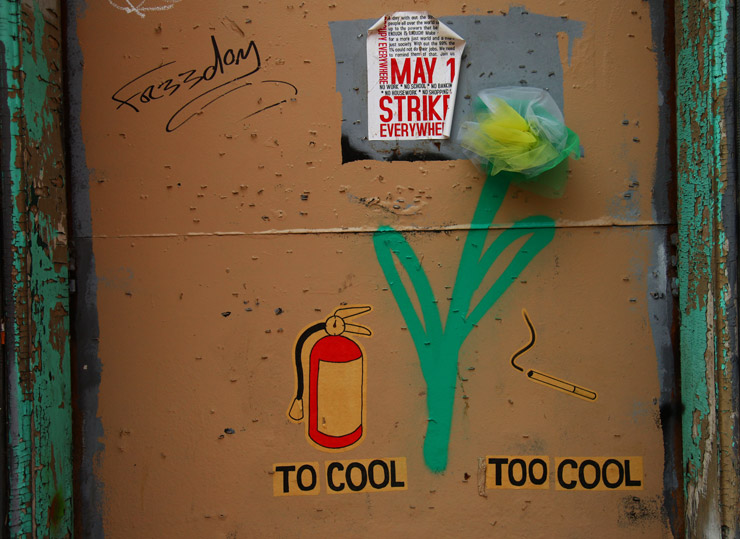 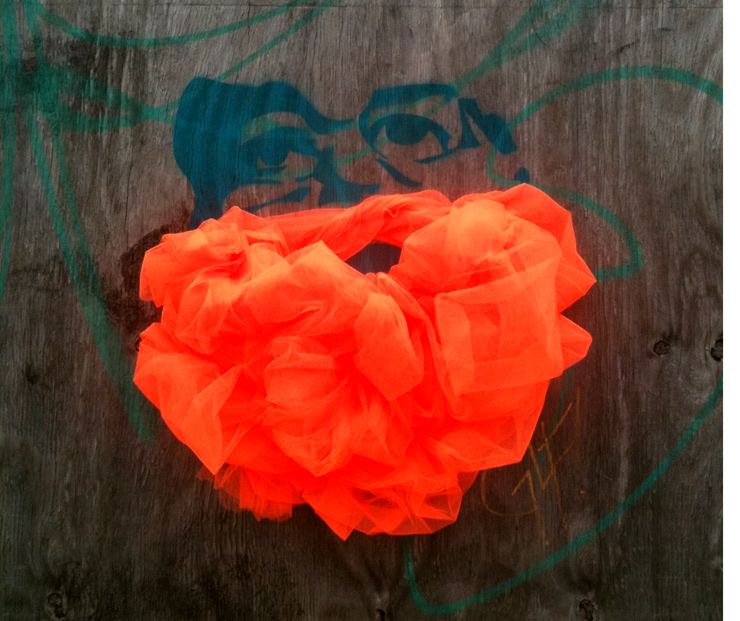 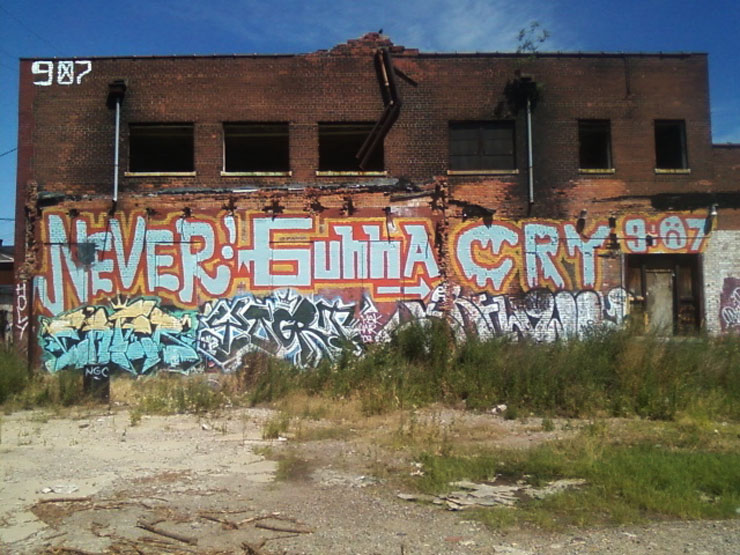