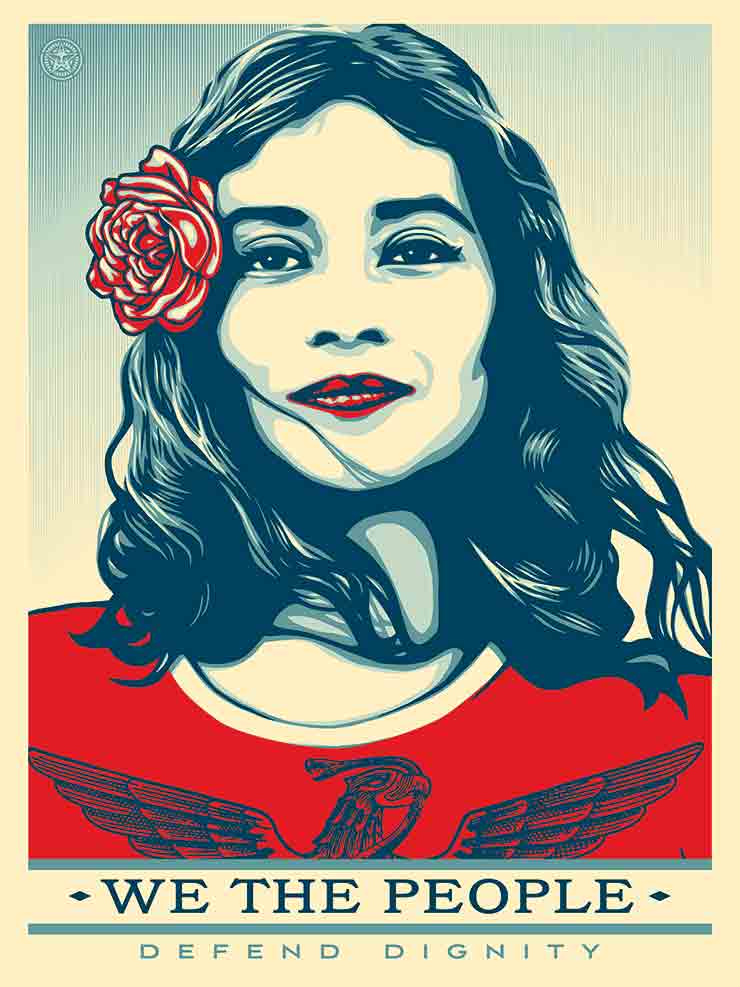 If the popular response to this poster campaign is an indication, there will be many in the streets.

The “We the People” project with Street Artist and activist Shepard Fairey, Ernesto Yerena and Jessica Sobogal originally aimed to raise $60,000 on their Kickstarter page with the non-profit Amplifier Foundation.

They received 22 times their goal.

We The People: Defend Dignity 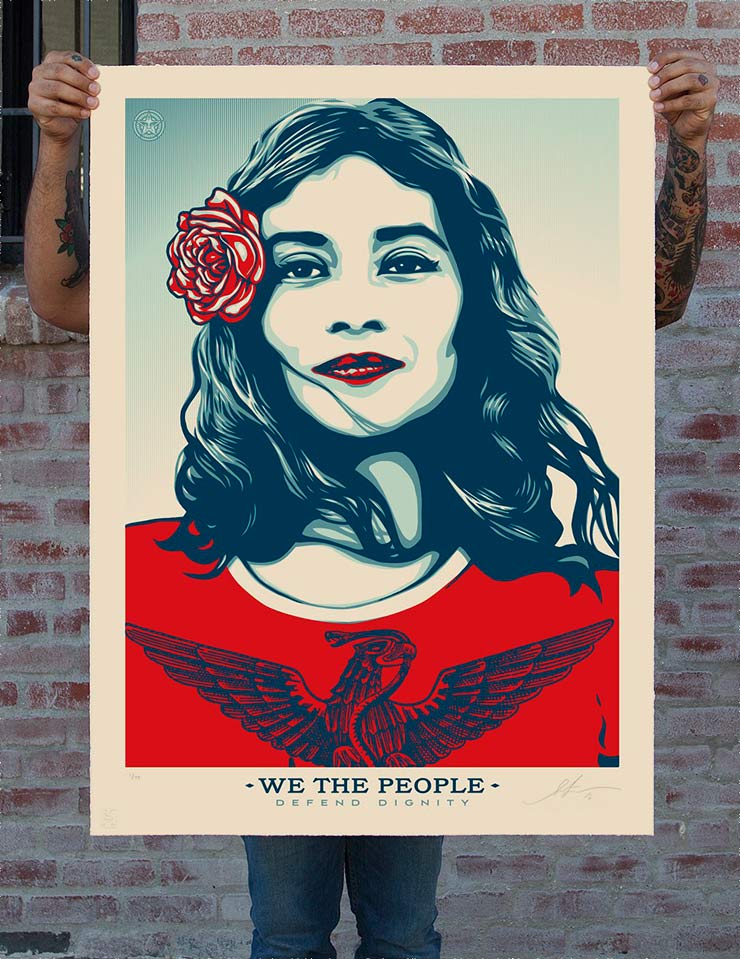 The first words in the US Constitution and the majority of whom did not vote for the incoming president, “We The People” will appear in full page ads in The Washington Post, The New York Times, and USA Today,” according to Shepard Fairey in an interview yesterday.

We The People: Protect Each Other 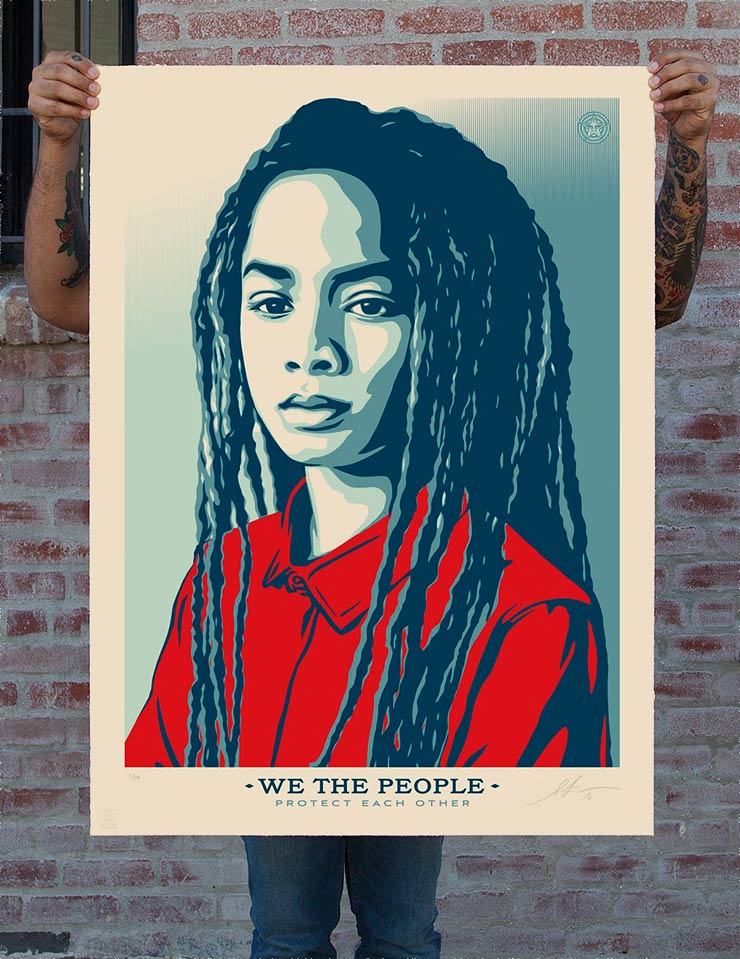 Rather than focusing on the visage of the new president, Donald Trump, as his iconic red, and blue “Hope” poster of then-candidate Barack Obama did, these new posters by Fairey and team feature communities that the conservative white right wing can’t bring themselves to treat equally – Native American, African American, Muslim, and Latinos.

The posters have been printed and distributed in the millions by now and you can download and print high resolution versions of them yourself below. You’ll also see that there are five new posters designed specifically for the Women’s March tomorrow in Washington, New York, Chicago, Los Angeles, and an estimated 616 other cities around the world that are also hosting marches called “sister marches”.

We The People: Are Greater Than Fear 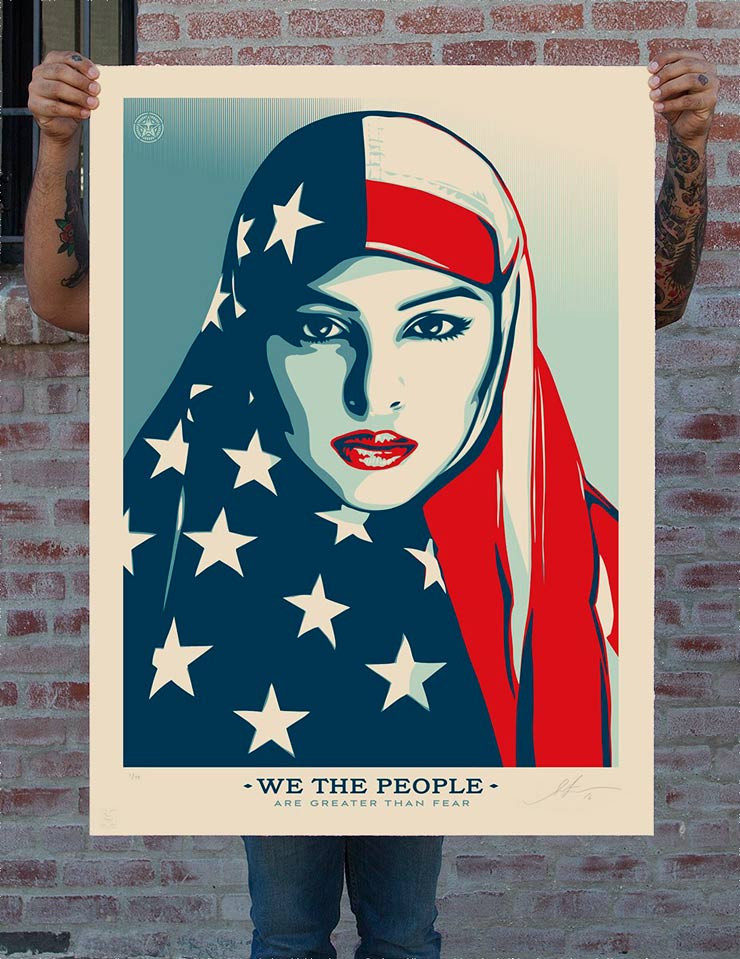 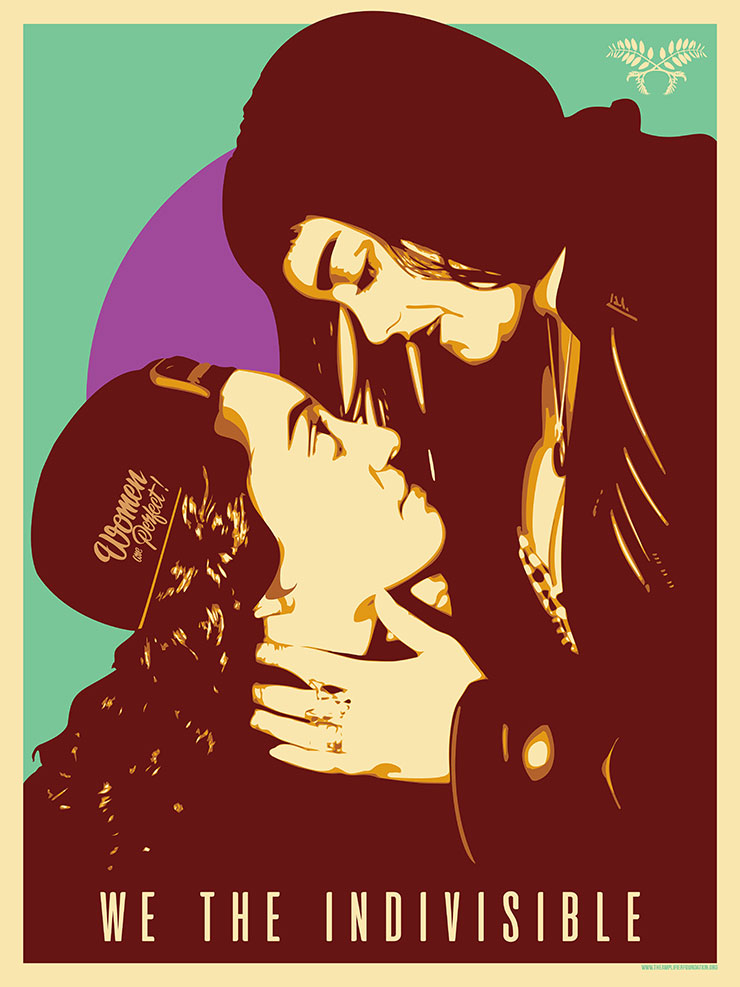 Jessica Sobogal “We the Indivisible” for the We the People Campaign. 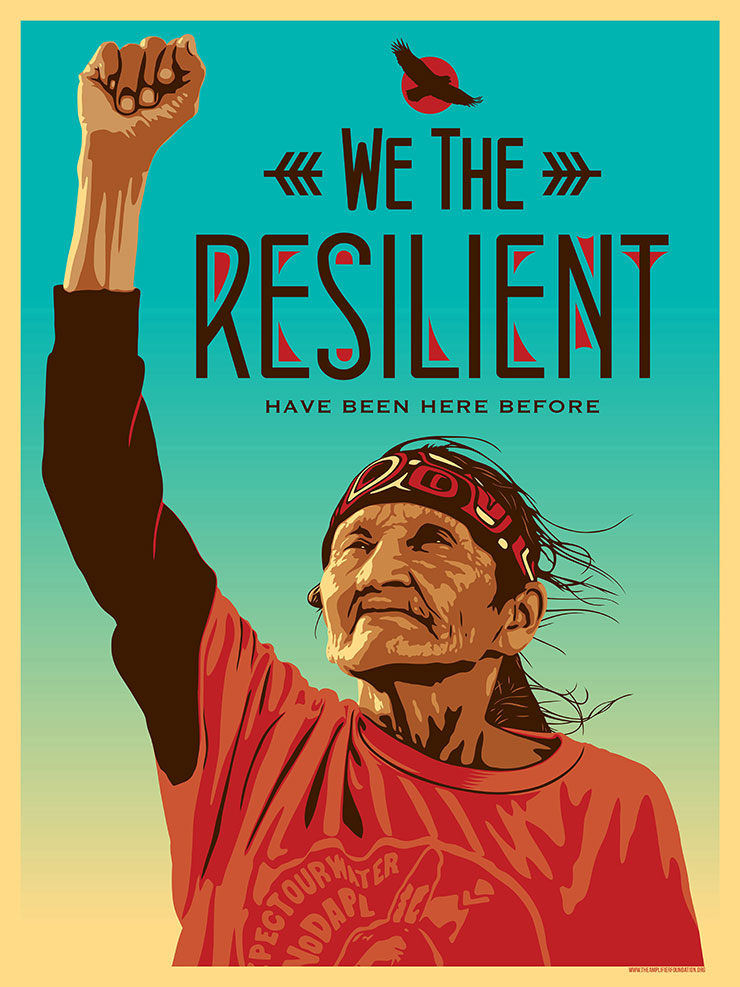 Ernesto Yerena for the “We the People” Campaign

Below are a few posters from a growing roster of posters for the Women’s March on Washington. Check below for a button to download them. 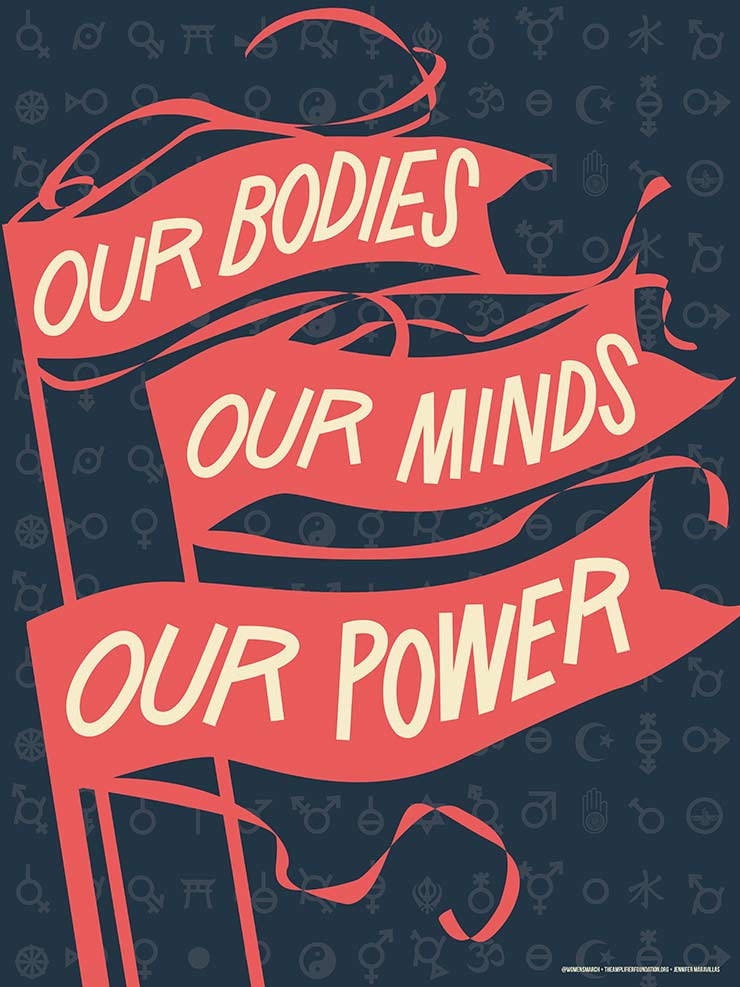 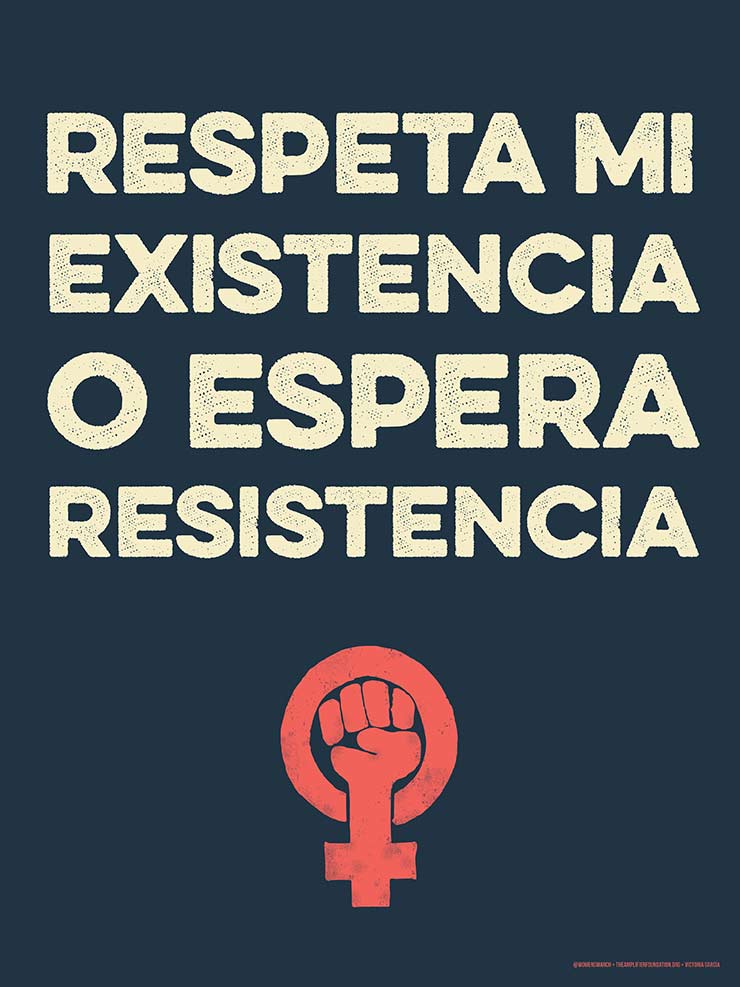 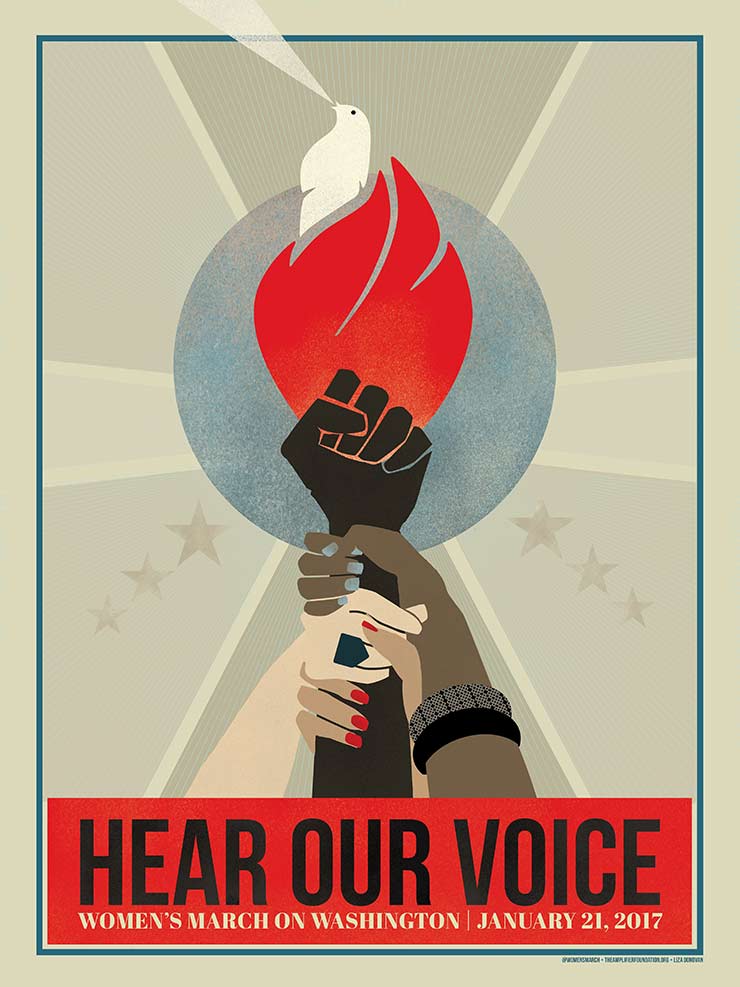 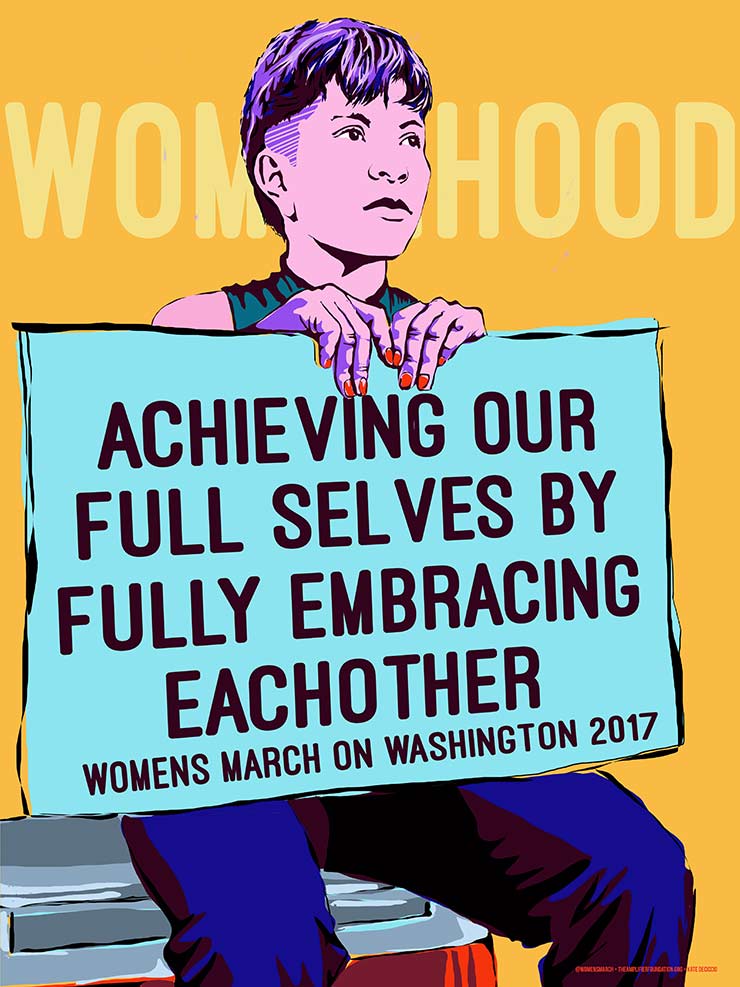 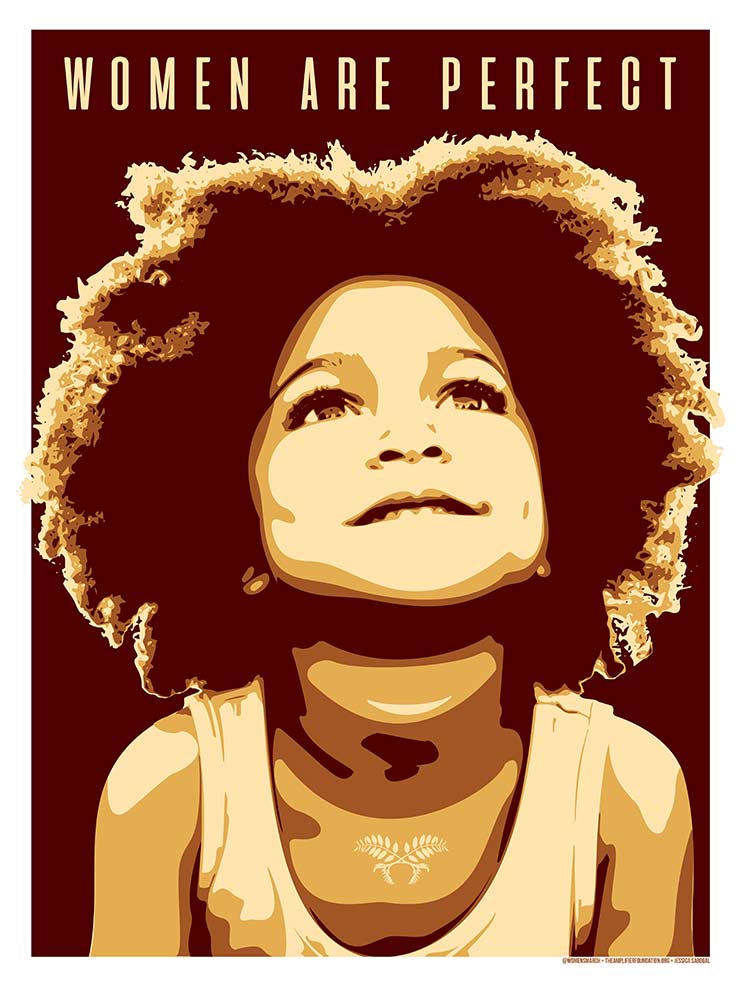 Download Zip file of high res versions of “We the People” posters to print here:

From the Kickstarter Page

SHEPARD FAIREY is one of the most accomplished street artists in the world, and creator and founder of Obey Clothing and Obey Giant, first becoming known for his “Andre The Giant has a Posse” sticker campaign while at the Rhode Island School of Design. He became widely known during the 2008 presidential election for his Barak Obama “Hope” poster.

JESSICA SABOGAL is a first generation Colombian American muralist. Her art serves as a haven, a tribute, a creative outlet of adoration and exaltation for women with stories often untold. Her pieces possess a vision of female identity that is revolutionary and powerful, brave and beautiful. Most recently she has created a visual campaign entitled, “Women Are Perfect” which attempts to spread this simple but necessary notion worldwide.

ERNESTO YERENA is an artist living in Los Angeles.  His art brings political concerns to light with subject matter that depicts cultural icons, rebels and everyday people voicing their stance against oppression. While Yerena identifies as Chicano he also strongly identifies as Native/Indigenous to this continent which is often seen in his work. Highly recognized for his activism, Yerena is the founder and curator of the Alto Arizona Art campaign (2010) as well as a founding member of the We Are Human campaign (2009).

THE AMPLIFIER FOUNDATION:  Our non-profit is dedicated to amplifying the voices of grassroots movements through art and community engagement. We do this by funding collaborations between those movements and contemporary artists so that their messages can reach a wider audience. Our goal is to flip artists into activists and observers into participants.

Artmossphere Dispatch 3: Remi, Luka, Ito and the Move Toward Contemporary
This week BSA is in Moscow with you and Urban Nation for Artmossphere 2016, the 2nd Street Art Biennale, a group exposition introducing 26 Russian and 42 foreign artists who were shaped by street ...
BSA Film Friday: 08.19.16
Our weekly focus on the moving image and art in the streets. And other oddities. Now screening : 1. 5 Minutes with Plotbot Ken via ARTE Creative 2. Aerosoul - NYC by Kris Kim 3. Nychos...
"Stencilists / Pochoiristes" Cuts Across the Street Scene Gallantly, with Serge Louis
Enthusiastic authors like Serge Louis can make Street Art sing, even in print. His new “Stencilists/Pochoiristes” is a finely illustrated hardcover of iconic images from the street. The carefully sel...
Headbanger Logan Hicks Brings His Posse to Celebrate a brand New Green Day
With Punk Rock Chords banging in his ears, the "workhorse" slams together two of his favorite things - Rock and Street Art - with a careful eye. He likes the dirt and the grit and diversity of New Y...
Peeta Goes Mono on a 3D Piece in Gainesville, Florida
“I went back to monochromatic pieces after a long time,” says Street Artist Peeta about his new anamorphic mural in Gainseville, Florida. His ability to master the optical illusion of three dimensions...
Brooklyn Street Art Jaime Rojo Shepard Fairey Steven P. Harrington We The People